Winemakers in the de-facto republic are building professional networks and taking advantage of indigenous grapes. 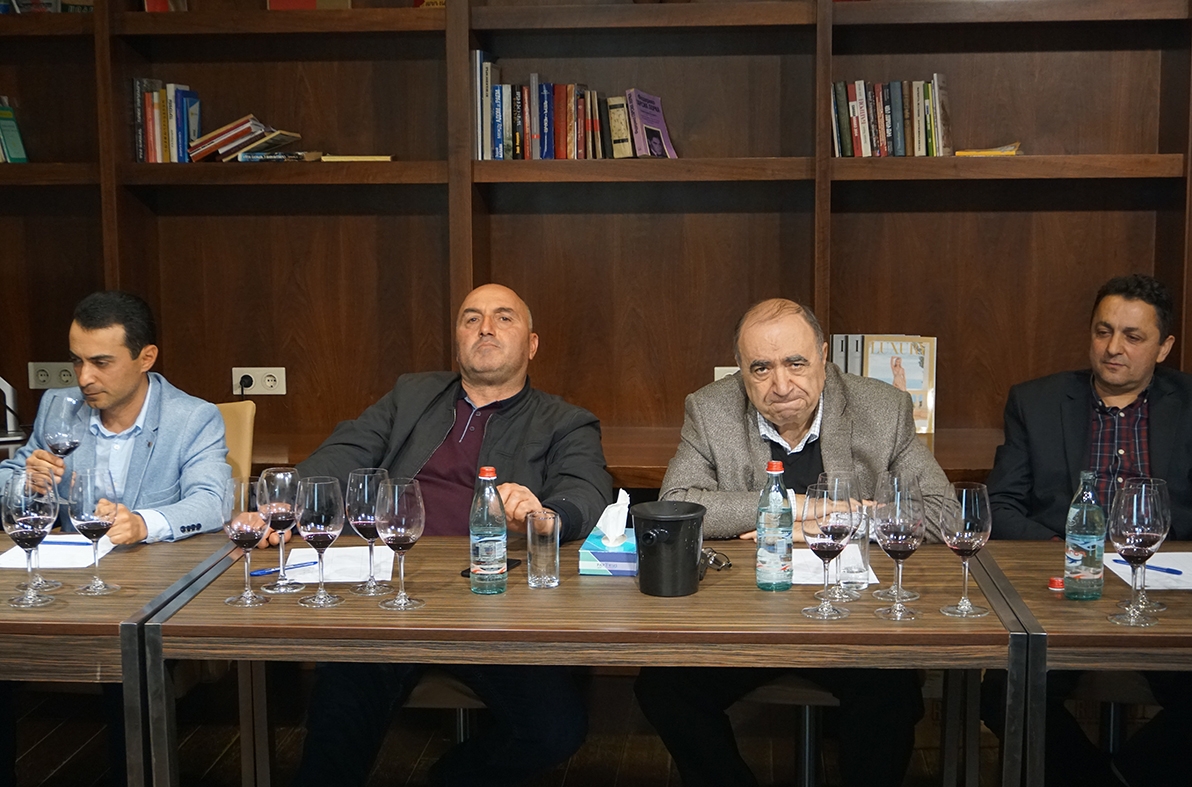 Karabakh winemakers sit for a blind tasting in Stepanakert. (All photos by David Kitai)

During the first week of April 2016, Grigori Avetissyan planted his second vineyard. It was on land he had just bought in his hillside village of Togh, in Nagorno-Karabakh, and it was planting season.

It was the same week, however, that the worst fighting in decades broke out between Armenian and Azerbaijani forces over Nagorno-Karabakh, in what became known as the “April War.”

Avetissyan planted anyway, he recalls now. Didn’t he fear that it all might be lost in a war? “That worry never crossed our mind,” he says, allowing that he did drink a few special reserve bottles that week, just in case.

That vineyard is now part of the Kataro winery. Since their first vintage in 2010, Kataro has become one of the leaders in the unrecognized republic’s growing wine industry. The region now counts about 15 wineries producing wines from unique native grapes, dovetailing with a wider renaissance of Armenian winemaking.

Nagorno-Karabakh is internationally recognized as part of Azerbaijan but has been controlled by Armenian forces since a war between the two sides as the Soviet Union collapsed. And Karabakh’s de facto government and its vintners are hoping that the budding wine industry can provide both an economic engine and prestige for their unrecognized state.

Winemakers in Karabakh claim to have made wine for millennia, just as their neighbors in Armenia have. In the Nagorno-Karabakh Autonomous Soviet Socialist Republic there was a state wine factory in Askeran, near the capital Stepanakert, making ordinary table wines with local grapes. During the war it fell to ruin but then was rebuilt as the production facility for the Artsakh brandy firm, which produces white fruit brandies, vodka, aged brandies, and wine. That’s owned by Giorgi Ohanyan, 73, who was born in Soviet Karabakh but left for Russia in 1968.

“At the end of the war, ‘94-95, lots of local Armenians left, but somebody had to come back and start a new life,” Ohanyan says. He decided to start producing brandy “to make the biggest economic impact [...] we employ a wide range of people here to forage and harvest fruit, make barrels, etc.”

The company exports to the United States, Canada, Russia, and the EU, all via a corporate registration in Armenia, a tool all Karabakh producers use; Ohanyan’s brandies and Avetissyan’s wines show up in Los Angeles and Chicago with “product of Armenia” on their labels.

In the past 15 years Armenia’s long-dormant wine industry has blossomed by reviving old varietals and techniques that producers say were derailed by a Soviet focus on brandy production. Some of Armenia’s leading wine brands, including the widely-praised Zorah Karasi, use this story as a selling point. Ohanyan sees Karabakh as a part of that movement. “Of course we feel this wave,” he says, “the same enthusiasm as in Armenia, the renaissance of winemaking.”

That renaissance was on display in early April at the first-ever “Artsakh Grand Degustation” in Stepanakert’s faux-Hellenic Vallex Garden Hotel. The event, organized by Kataro and the Artsakh Vinegrowers and Winemakers Association (which Avetissyan chairs), was intended to show off Karabakh’s wines and be a chance for the winemakers to meet one another and taste each other’s work.

“It’s our aim to collect all these people in one place, to help them [form] a community,” says Karine Zakarian, project manager at Kataro. “Karabakh is not a place for competition.”

In 2015 Karabakh’s culture ministry noticed Avetissyan’s emerging success and asked him to found the Winemakers Association to encourage more quality winemaking. Avetissyan did so, but insists that he keeps as much distance from the state as possible. Even so, both the de facto ministers of culture and defense were in attendance at the Stepanakert degustation.

Before the main event – a tasting open to the public – the 15 winemakers showing that day sat down for a blind tasting led by Arthur Sarkisyan, a Russian-Armenian sommelier. He guided the winemakers through 15 different wines, explaining how medals are awarded at tastings and giving instructions on how to taste and describe a wine. For many of the winemakers, it was the first time they’d attended such a formal degustation. Every wine tasted was made from khndoghni, a grape native to Karabakh.

“There was a French winemaker who came to Kataro and Grigori [Avetissyan] asked him ‘I want to have syrah or merlot or something else, what do you suggest?’” Zakarian says. “He said, ‘Khndoghni! Only khndoghni. You have an interesting local grape, why would you want anything else?’”

Khndoghni, hard as it is to pronounce, might be the best thing Karabakh’s wine industry has going for it. The grape isn’t grown in Armenia or in the rest of Azerbaijan, only in Karabakh. It makes red wines with an herbaceous, almost vegetal edge and intense tannins. Treated badly, khndoghni wine can be too tannic for any of the grape’s gentle fruit flavors to shine through. At its best, though, khndoghni makes wines that balance tension with plush fruit – food friendly but thoughtful and serious. Its best iterations are aged judiciously in Caucasian Oak barrels, themselves made from wood grown in Karabakh.

Avetissyan says he learned to make quality khndoghni wines by experimenting. Now his wines are among the top sellers in Yerevan’s high-end restaurants.

Some of the winemakers showing at the degustation, though, still had a long way to go. Unbalanced wines, either faulty or overcrowded with oak flavors, were common. Other wines on show were made through WineWorks, a custom crush facility based in Armenia proper. Those wines were fine, but lacked distinctiveness and character. They could be from anywhere.

The most striking wine at the tasting came from a family producer. The Grigoriyan family produces only 1,000 bottles a year of Apun Kini or “Grandfather’s Wine,” working naturally without adding sulfites or fining agents. Apun Kini is unique, sharing the tannic and vegetal aspects of the other best khndoghni wines, but with lively, juicy red fruit flavors. It shows the kind of potential these winemakers have to work with. Among the organizers of the show, there was a palpable commitment to realizing that potential.

“France has Bordeaux and Burgundy, Spain has Jerez, Portugal has Port wine,” says Zakarian, the project manager at Kataro. “Artsakh should have khndoghni.”

David Kitai is a journalist based in Tbilisi. Sign up for Eurasianet's free weekly newsletter.