Iran stands to be one of the winners of the new regional transportation map. 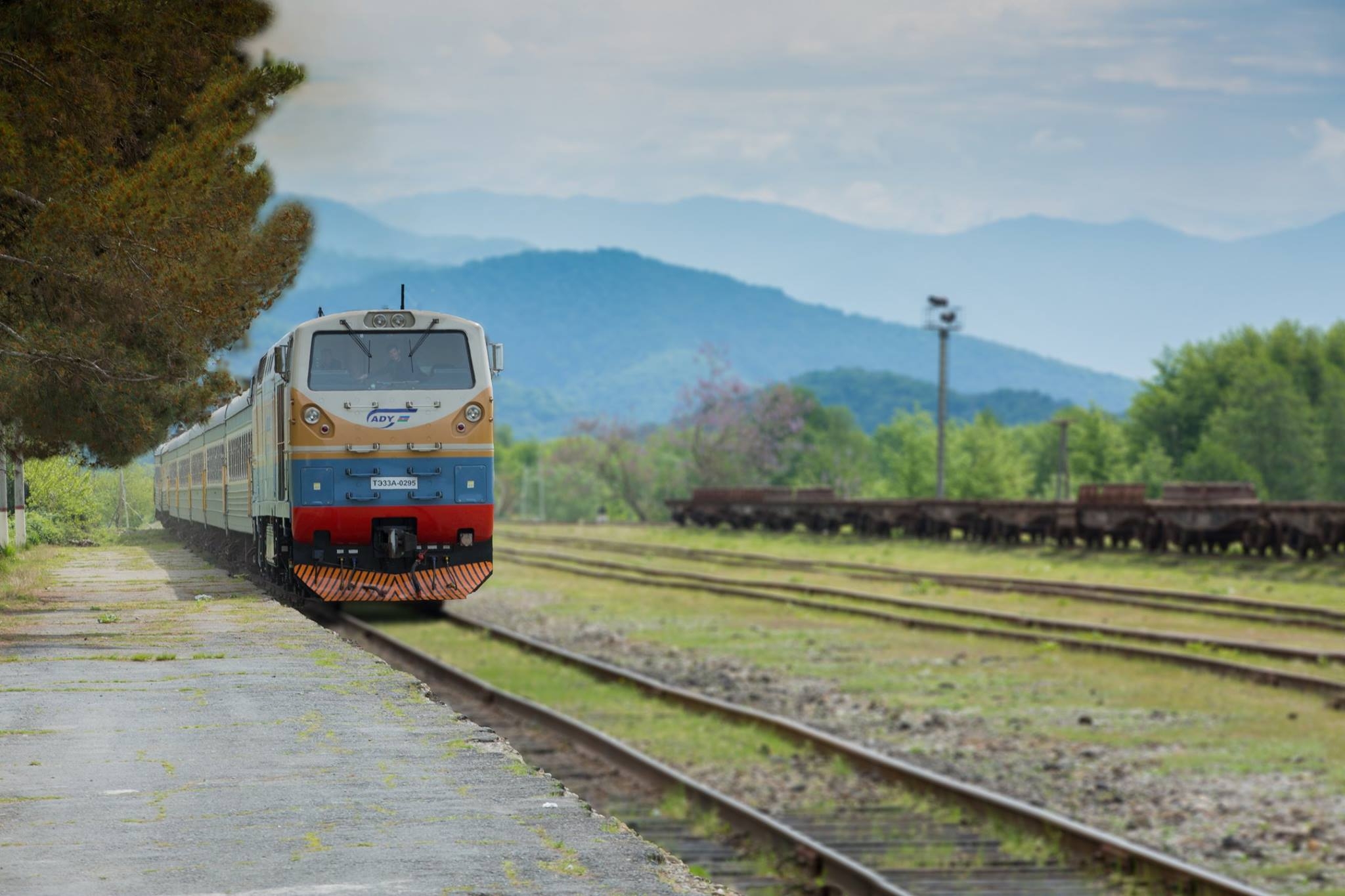 A new rail line connecting Azerbaijan with its exclave of Nakhchivan promises to revolutionize transportation in the Caucasus and could have broad ramifications further afield.

In February, a camouflage-clad Azerbaijan President Ilham Aliyev laid the foundation for a new 100-kilometer stretch of railroad across southern Azerbaijan, along the Iranian border, in territory that Azerbaijan took back from Armenia after the war last year. “This railroad has enormous strategic significance,” he said.

The line is not new. It was originally constructed in 1941, when the Caucasus formed the southwestern flank of the Soviet Union, linking Moscow with not only Azerbaijan, Armenia and Nakhchivan, but with the Iranian rail network as well via Julfa in Nakhchivan. It thus provided for freight transit between the Soviet Union and Iranian ports on the Persian Gulf.

Inoperable since 1989, as the Soviet Union was collapsing and relations between Armenia and Azerbaijan turned hostile, along large parts of the route there is believed to be little left of the track and other infrastructure.

To date Baku has not announced either a cost estimate or a completion date for the project on their side of the border, but railroad analysts say that since the bulk of the track bed and bridges are likely still in place, rebuilding should require little heavy-earth moving, keeping down costs and construction time.

The prospects for the Armenian side are less clear. Armenians have been skeptical of the rush to open the new transport routes, though senior officials have been meeting with their Russian and Azerbaijani counterparts to hash out plans. Deputy Prime Minister Mher Grigoryan told parliament on March 25 that the trilateral working group has been delayed, but is continuing. He said the group is “talking about the restoration of the existing infrastructure of the Soviet era in every possible way.” 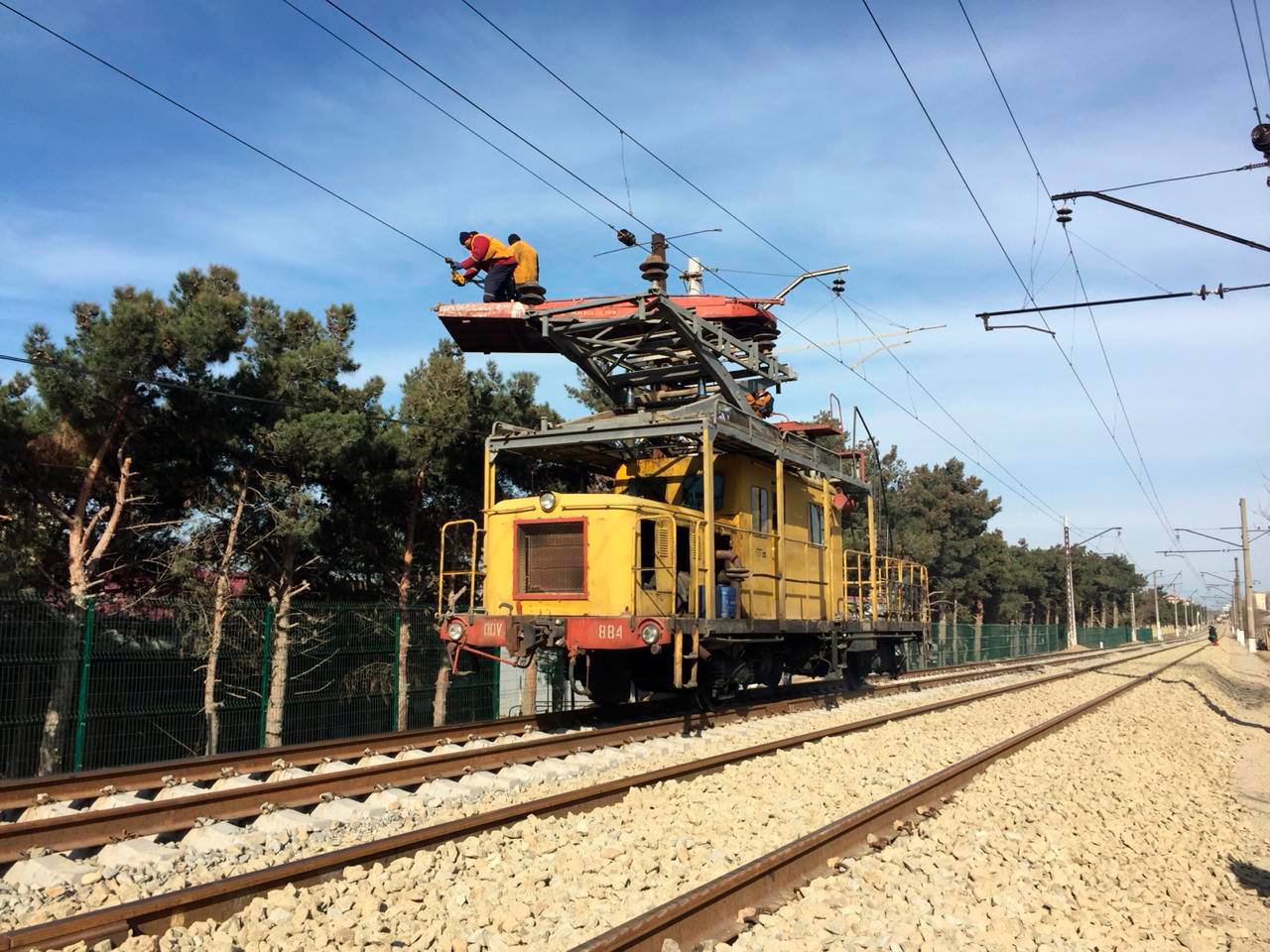 Azerbaijan should get plenty of support from both Iran and Russia, as both have long lobbied for the creation of a north-south rail corridor linking the two countries to ease regional trade, reduce freight costs and establish trade routes with more distant destinations.

In 2000, Russia, Iran and India signed an agreement aimed at creating a freight network linking Russia, Iran, Afghanistan, India and the EU. In 2005, it was ratified by Azerbaijan.

"The development of the International North South Transport Corridor linking Iran's southern ports with the Caucasus and Europe could significantly reduce freight costs," said Andrew Grantham, news editor at Railway Gazette International. Grantham said that access to Iranian ports would further open up maritime connections to and from India.

But the unresolved conflicts in Nagorno-Karabakh and Afghanistan and international sanctions against Iran slowed investment.

Now, with the Russia-brokered trilateral ceasefire between Armenia and Azerbaijan, creating that long mooted regional rail corridor is back on the agenda.

The ninth point of the ceasefire statement calls for regional transportation links to be “unblocked” generally, and more specifically calls for new infrastructure linking Nakhchivan with mainland Azerbaijan. The three sides are working out the details of what exactly that will look like, but Azerbaijan is already forging ahead with its new rail link to the Armenian border.

The new route will relieve Baku of the ordeal of reaching its disconnected western exclave via an 840-kilometer detour around Armenia through Georgia and Turkey. 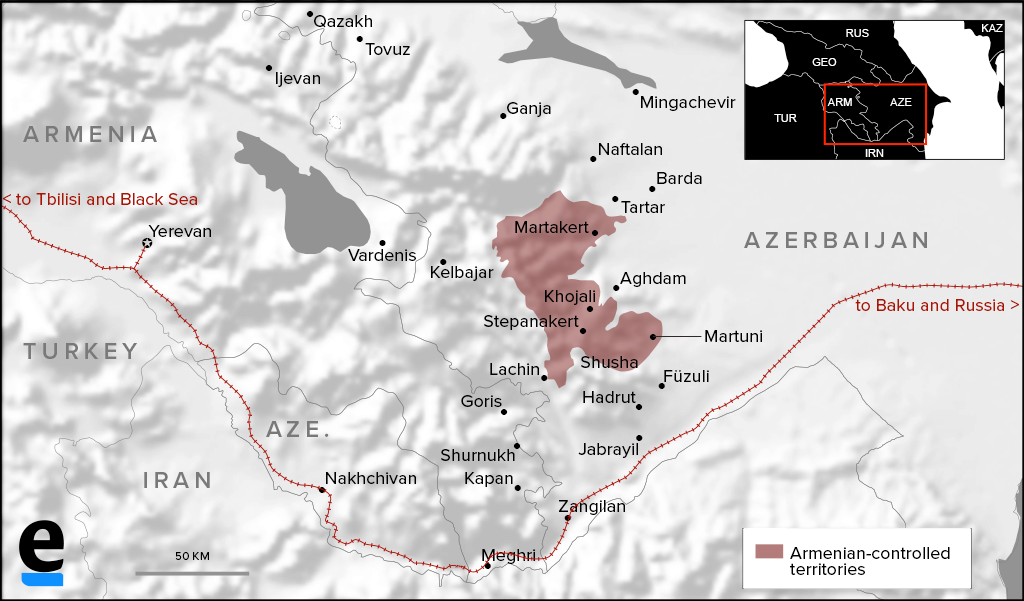 "This is an extremely significant project, which will benefit not just Azerbaijan, but all the countries of the region, and will become a major international freight transit corridor," said Orkhan Bagirov, leading advisor at the Azerbaijani government-run think tank Center of Analysis of International Relations.

Tehran has been quick to show its support for the Nakhchivan connection. "The re-opening of the Julfa-Nakhchivan railway line is necessary for Iran's access to neighboring countries and the Eurasian market," Iranian Foreign Minister Mohammad Javad Zarif said at a February 18 meeting with the governor of Iran's largely Azerbaijani-speaking northwestern province of East Azerbaijan, just four days after Aliyev's groundbreaking ceremony.

While Nakhchivan was inaccessible by rail, Azerbaijan and Iran signed an agreement in 2005 to create an alternate north-south route, along the Caspian coast and crossing the border at Astara.

Baku completed its section of line and built a new rail bridge across the Astarachay river border to Iran in 2017, but delays caused by a combination of international sanctions and high costs due to the difficult terrain have long delayed Iran’s efforts to complete its part.

Nominally, Iran remains committed to the project. Iran’s ambassador to Russia, Mehdi Sanaei, in November described the line as an "economic imperative" and called for its rapid completion. But with remaining costs estimated in the region of $1.1 billion, it's unclear when or if this will happen.

The results of the new line so far, even in its truncated form, suggest a significant potential. In 2018, its first year of operation, the Azerbaijani section carried 270,000 tons of cargo to Iran, rising to 364,000 in 2019, even despite the added cost of onward shipment through Iran by road. Given that the cost of shipping by rail over medium and long distances is generally less than half that of going by road, it stands to reason that a reopened rail link through Nakhchivan would have no shortage of business.

The reopening of the Nakhchivan line also offers significant opportunities for long-isolated Armenia to boost its international connectivity. For now, Iran – one of only two open borders that Armenia has – is reachable only by a difficult road. Restoring the old Soviet rail route from Yerevan to Azerbaijan via Nakhchivan could change that.

While the Armenian public has responded warily to the prospects of opening transportation routes with Azerbaijan, Prime Minister Nikol Pashinyan has tried to paint it as a win for Armenia, too. “It is beneficial for Armenia because we must get a reliable railway and land communication with the Russian Federation and the Islamic Republic of Iran,” Pashinyan said on March 20. “This means that our country’s economy can change considerably.”

For its part, Iran has made no secret of its readiness to reestablish rail links with Armenia.

During a visit to Nakhchivan in January, Foreign minister Zarif lobbied for the Nakhchivan line to be reopened to ease transport to Armenia.

While reviving the old Soviet era Iran-Nakhchivan-Armenia rail link should be straightforward, a rail link between Armenia and Russia could prove trickier.

Aliyev has signaled his support for such a link, but with the caveat that it can only be realized through Azerbaijan's existing rail network.

Armenia is not eager to rely on Azerbaijan to connect with Russia, but Yerevan's own preference for a rail link to Russia through Georgia remains unlikely to be realized any time soon.

An existing Soviet-era line linked Armenia with Russia along Georgia’s Black Sea coast and Abkhazia, which – like Nagorno-Karabakh – broke away during a separatist war as the Soviet Union collapsed.

In February the de facto Abkhazian parliament notified the Russian Duma of its interest in reopening the Armenia-Russia railroad through Abkhazia, but Georgia is unlikely to sign on. Armenia's only other option for a rail link with Russia would be a new line inland through Georgia and the north Caucasus mountains, which while not technically impossible would be prohibitively expensive.

Whether Yerevan will accept Aliyev's offer remains to be seen. But in March, Armenia began for the first time to import Russian natural gas via Azerbaijan, a temporary arrangement while a pipeline between Russia and Georgia undergoes maintenance, suggesting that cooperation with Baku on sensitive, strategic issues is not impossible.

Even if it turns out to be politically possible, shipping freight by rail from Armenia to Russia through Azerbaijan represents about a 500-kilometer longer trip than through Georgia. So if Baku really wants to make its route viable, it may need to make additional efforts to ensure that it is both faster and more reliable than the road through Georgia. 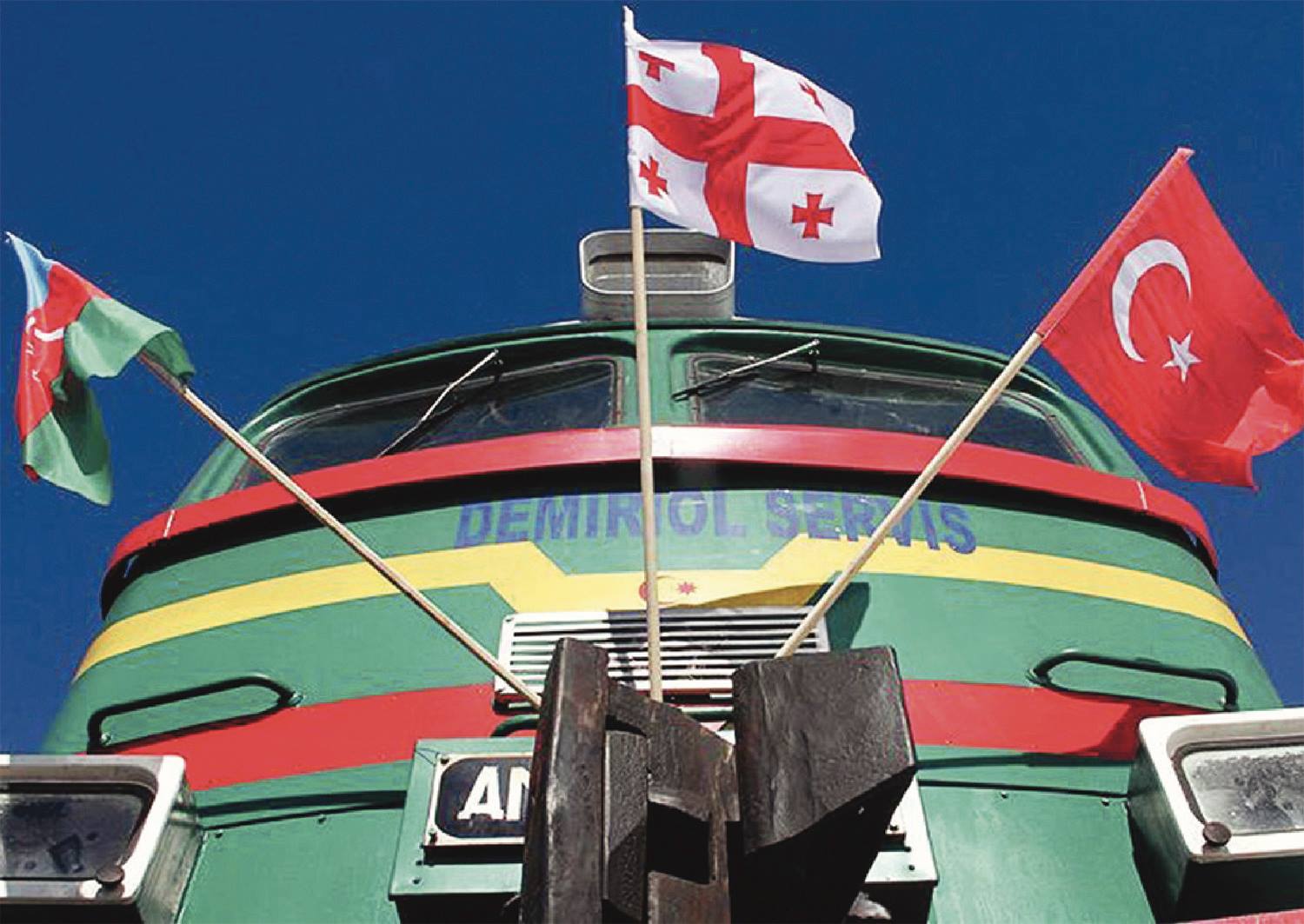 Turkey and Georgia to lose out?

As and when the Azerbaijan-Nakhchivan rail line restarts operations, it will necessarily become Baku's main transport link with the enclave.

As such, it will end Baku's reliance on the Baku-Tbilisi-Kars (BTK) rail line, which only began operating in 2017. Constructed at a cost of $450 million over 10 years, the BTK was purpose-built to replace the old Soviet era line from Turkey to Azerbaijan through Armenia.

Ankara and Baku early last year announced that work on a spur from Kars via Igdır to Nakhchivan, which would provide Baku a direct rail link to the exclave, would start in 2021.

Ankara, however, has made no provision for the project in its 2021 budget, suggesting that with Baku's plans to reopen a direct link to Nakhchivan, the project – which was expected to cost around $300 million – may now be quietly dropped.

A fall in traffic along the BTK will mean revenue losses for both Turkey and Georgia, but the business case for the state-of-the-art line was never predicated on Azerbaijan's domestic needs.

Rather, it was designed to fill a missing link in Turkey's "Middle Corridor" initiative, aimed at creating a high-speed transcontinental rail freight link between Turkey's European borders, through the Caucasus and across the Caspian. Regular freight traffic between Turkey, Europe, and China is already moving along the route.

That trade is set to grow rapidly, with some estimates suggesting the BTK could carry up to 30 million tons of freight a year.

Adding to that the new spur to Nakhchivan and the restoration of former Soviet links in the Caucasus, the region is poised for a rail revolution, Railway Gazette’s Grantham said.

"Rail is cheaper than air freight, faster than maritime transport and safer and better for the environment than road haulage," he said. "All over the world countries are making efforts to get freight traffic off trucks and onto trains."