Young and old, men and women shouted, “Russia is for Russians.” 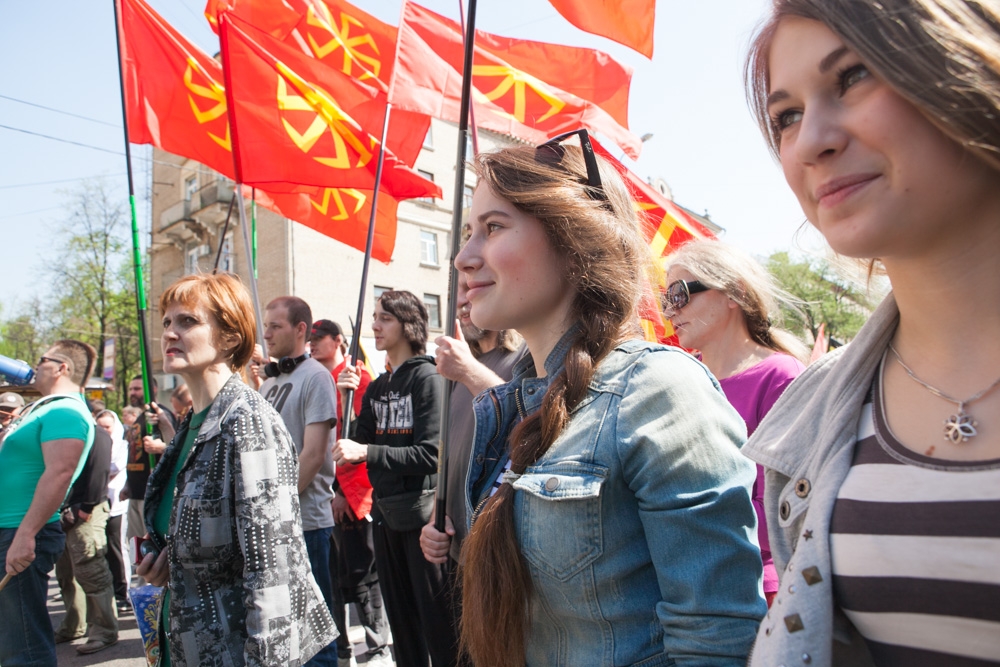 Some participants defied stereotypes about the Russian far right. 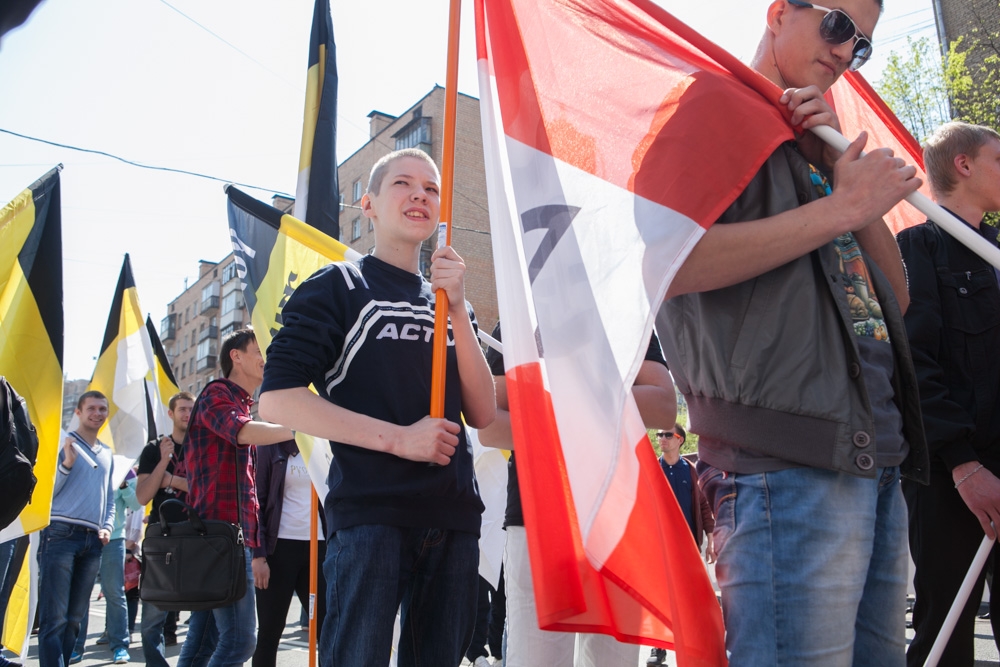 “Russian citizenship for Russians. No to handing out citizenship,” some chanted. “Who are we? Russians! We are the power here!” 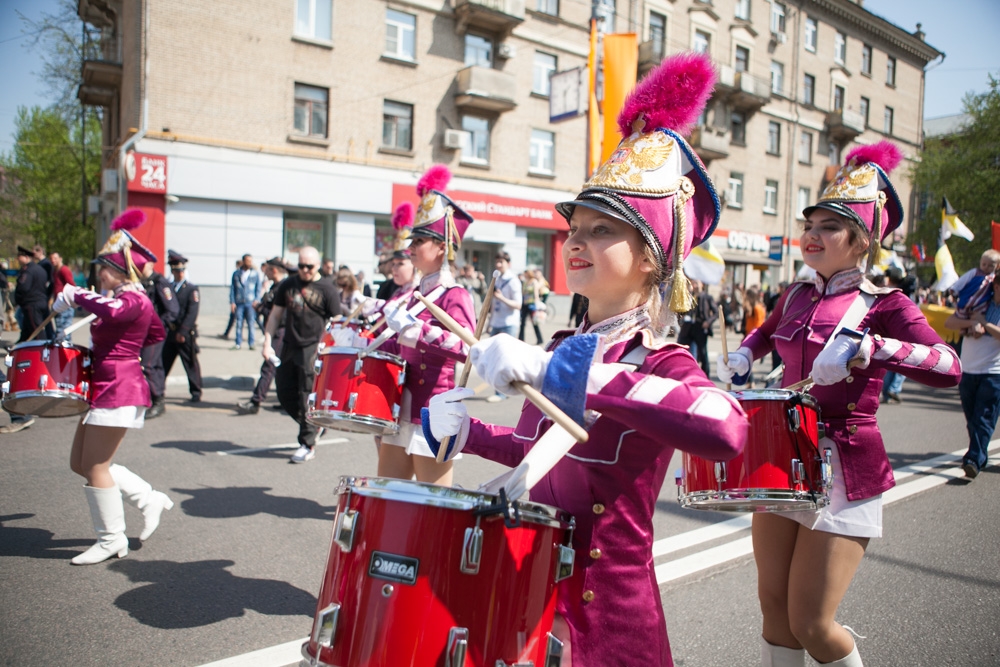 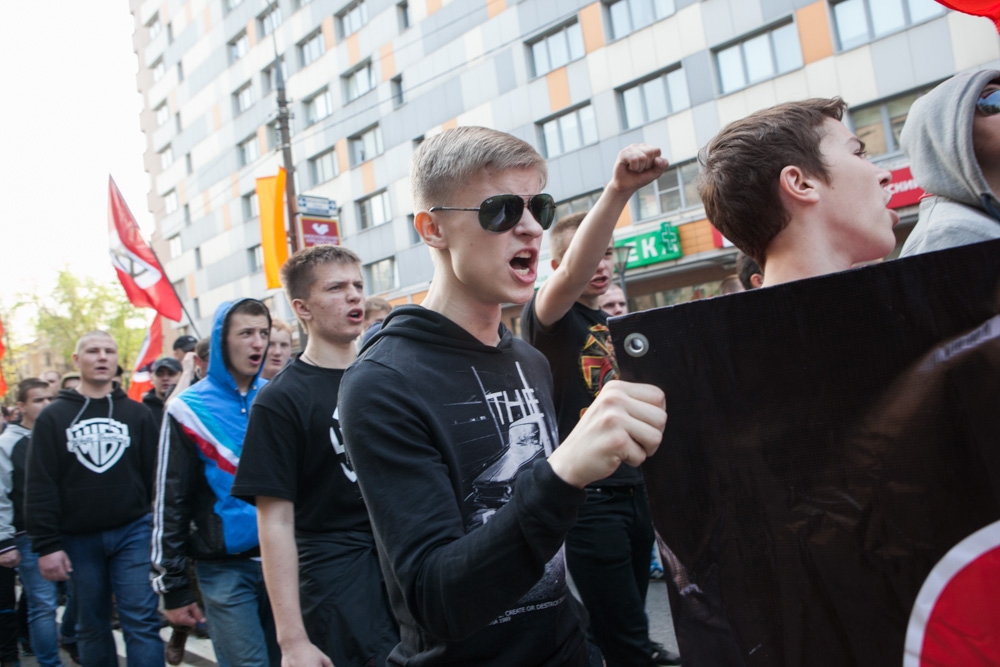 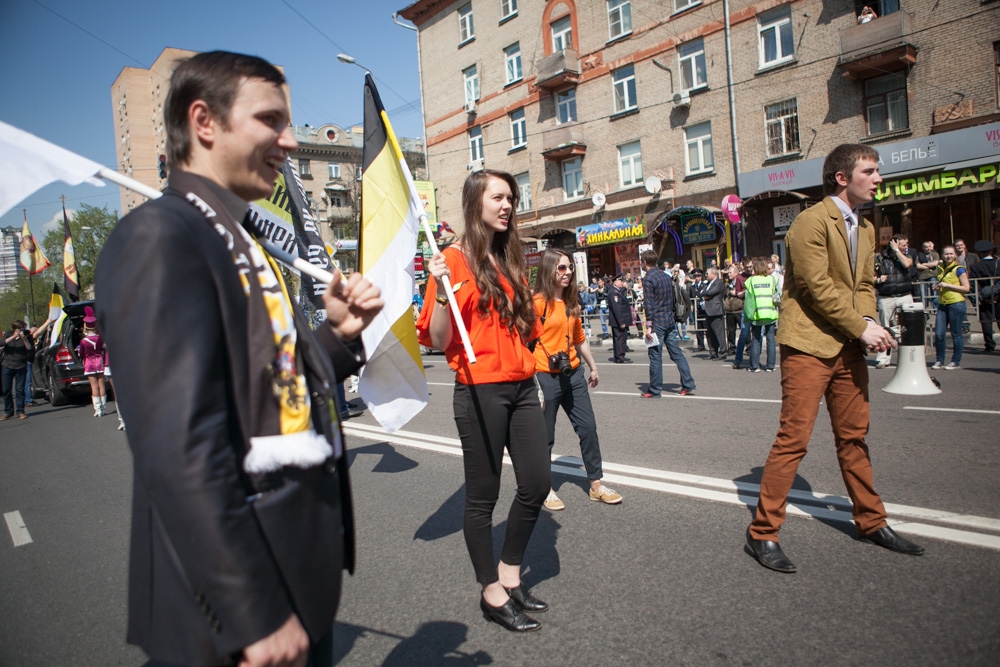 Chant leaders wind up the crowd. 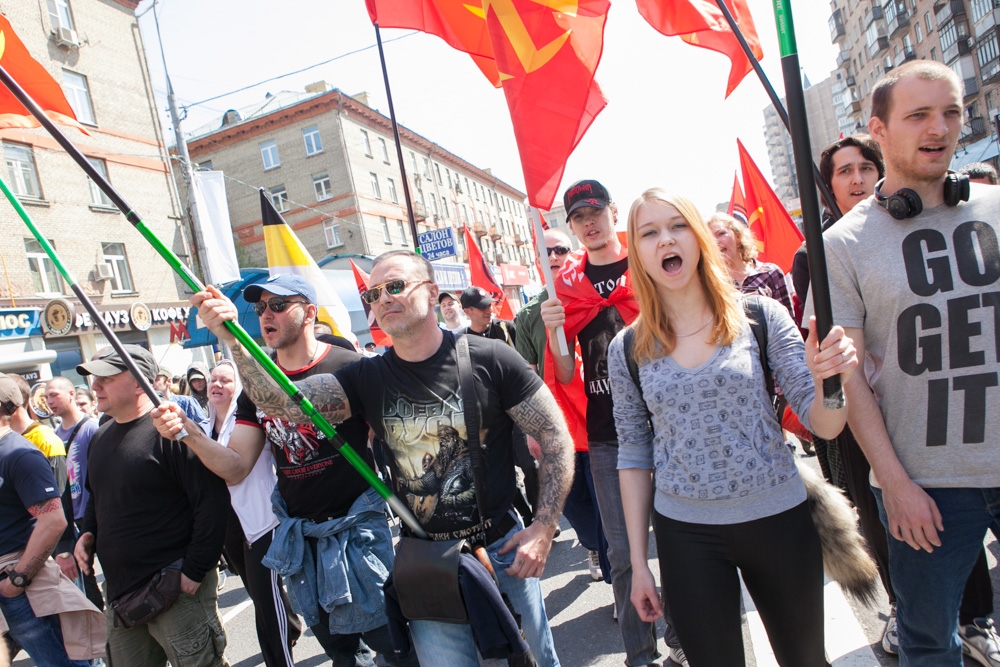 “Russia is for Russians,” “Glory to the Russians,” and angrier slogans, such as “get out, black dirt” featured at the march. 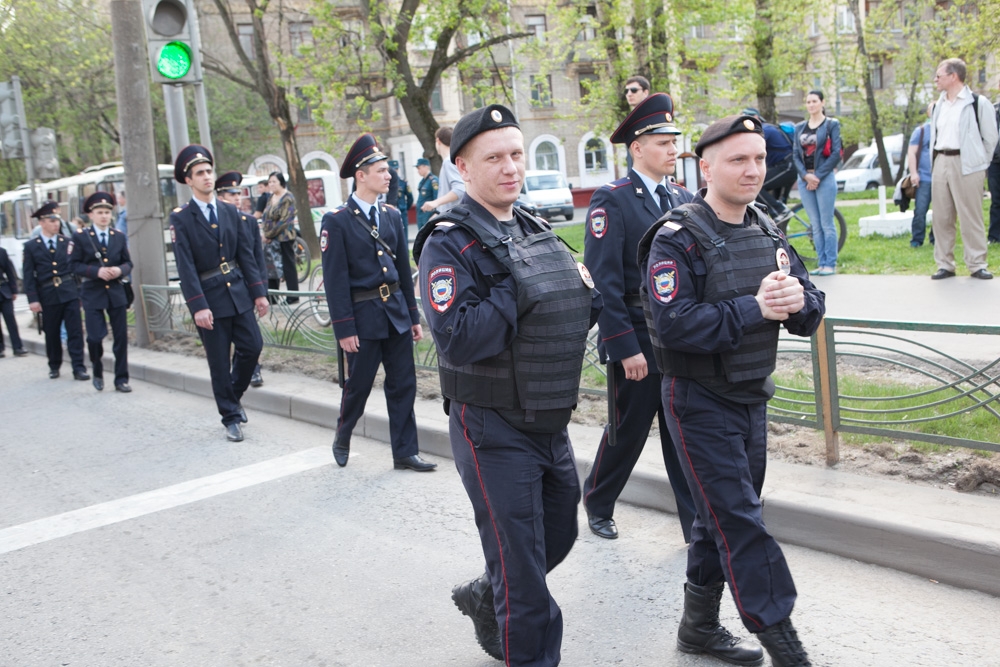 Hundreds of police lined the procession. 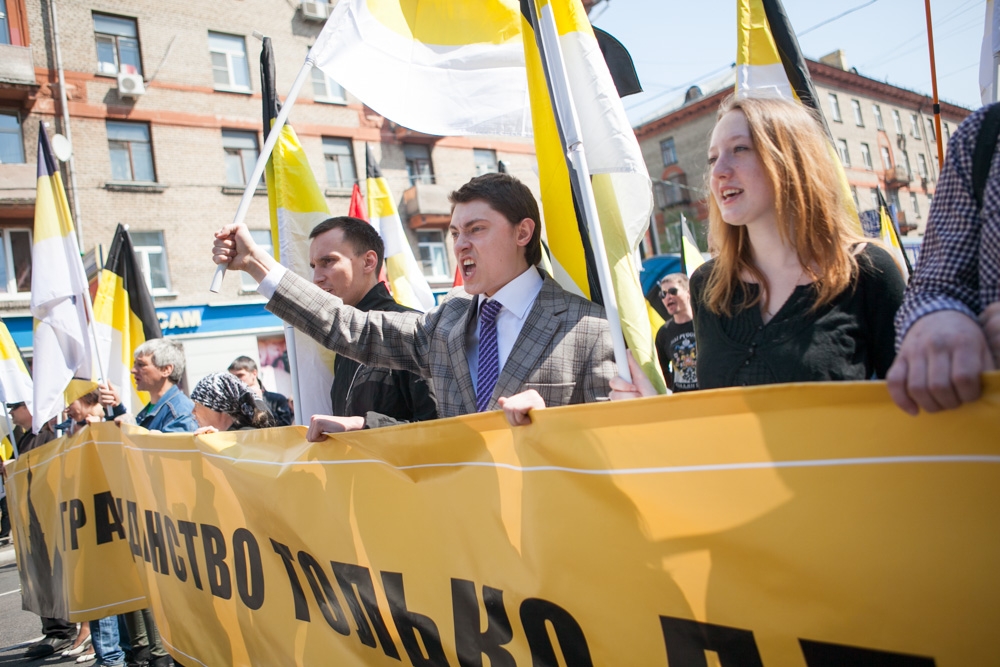 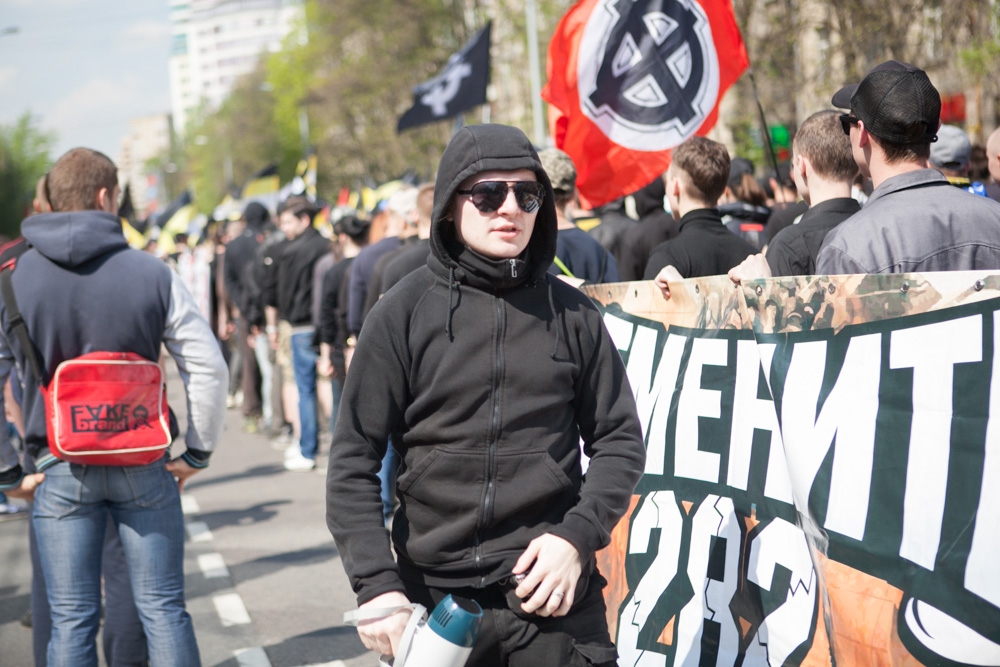 Some of the banners incorporated white power symbols. 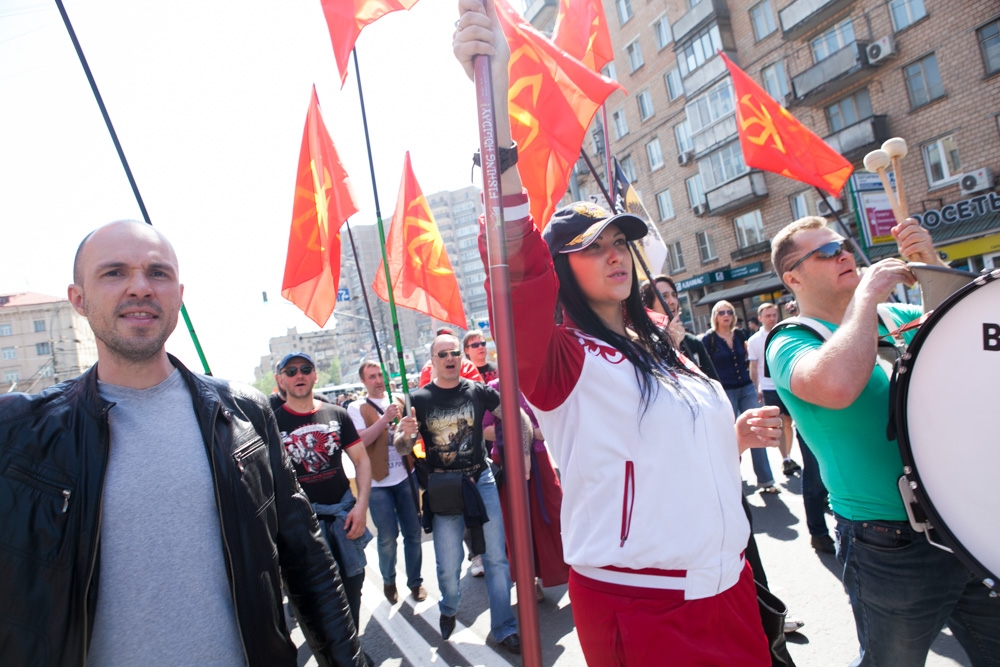 The kolovrat, on the red flags here, is sometimes called the Slavic swastika. Others defend it as a pagan sun symbol.
prev
next

Led by a flag bearer hoisting an image of Jesus, and six drummer girls in purple satin, about a thousand supporters of various nationalist causes marched for what they called “Russian May Day” in northwestern Moscow on May 1.

Young and old, men and women shouted, “Russia is for Russians,” “Glory to the Russians,” and angrier slogans, such as “get out, black dirt” – a reference to migrants from Central Asia and the Caucasus.

Indeed, it was migration that seemed to unite this broad swath of rightwing Russia.

Organizers from the Slavic Union and the Russian Ethno-Political Alliance, among others, called for the gathering – an alternative to the larger May Day rally on Red Square – to protest a new law that should ease Russian citizenship rules for people from Central Asia and the Caucasus.

“Russian citizenship for Russians. No to handing out citizenship,” some chanted. “Who are we? Russians! We are the power here!”

Several of the groups also yelled, “Cancel 282” – that is, Article 282 of the criminal code, which prohibits inciting ethnic hatred. Each of about 10 groups had its own flag, including a black-yellow-and-white-striped banner used briefly by Tsarist Russia in the 19th century. Other banners incorporated white power symbols. (The kolovrat, seen in several images above on a red flag, is sometimes called the Slavic swastika. Adopted by some rightwing groups, others defend it as an ancient pagan symbol for the sun.)

But some participants called on Russians for self-improvement: “A strong motherland and healthy nation is the basis of national security. Russians, stop drinking, stop using drugs, do sports. Glory to Russia,” one group recited.

At times, some attendees appeared to mock Russian President Vladimir Putin, but organizers tried to calm troublemakers, mindful, no doubt, of the hundreds of police, some in riot gear, deployed along the procession route.

Putin also had his fans: Some, calling for Russia to annex eastern Ukraine, praised the Russian president for seizing Crimea in March and named cities in Ukraine that “are Russian,” including the capital, Kiev.

At least one group bellowed, repeatedly, “national socialism,” in a chilling refrain that could embarrass Russian officials trying to paint Ukraine’s revolutionary government as a hotbed of fascism. The paradox was not lost on one elderly lady sitting at a bus stop, who murmured to a friend: "They [the government] say fascists are taking over Ukraine, but look right here. In Moscow. I just don't understand."

Violent xenophobia has risen in recent years as millions of migrants, many from the Caucasus and Central Asia, flood into Russia to take low-paying jobs in construction and the service industry. Moscow’s streets are normally a kaleidoscope of ethnicities representing most of the former Soviet republics and beyond.

Unsurprisingly, minorities made themselves scarce during the march up Marshal Biryuzov Street today. But afterward, it was Central Asian men dismantling the police barricades and cleaning up the trash. A Kyrgyz woman watching the procession from the sandwich shop where she works said she had no comment, and then, assured she was speaking to a foreigner, said the people marching terrified her.