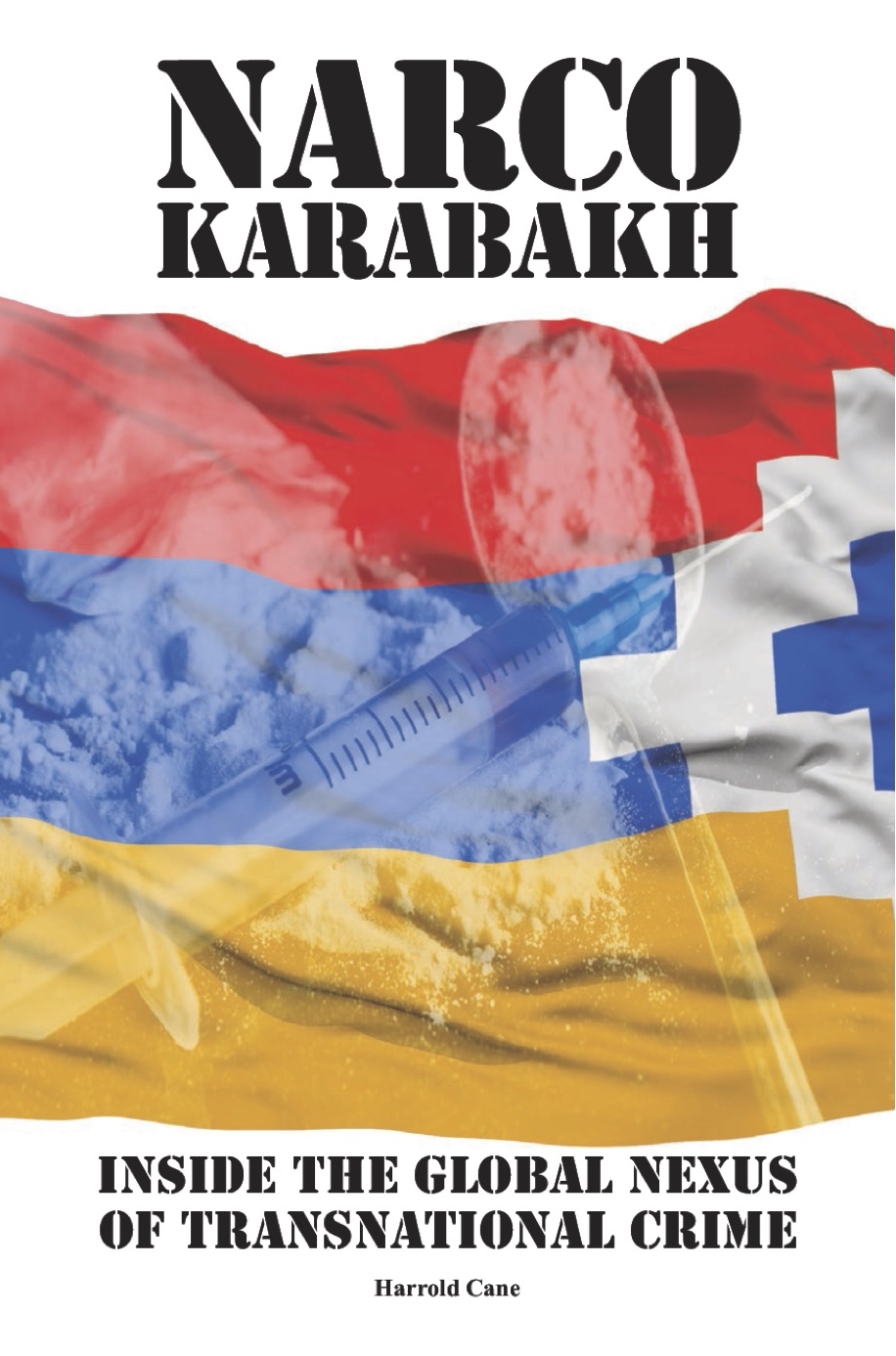 The cover of a new book/black PR effort published under mysterious circumstances.

A new book claims to expose Nagorno-Karabakh as an international hub of drug, arms, and human smuggling. But the book’s murky origins and hard-to-support allegations suggest instead an elaborate effort to spread black PR in the international media against Karabakh and the Armenian forces who control it.

The book, Narco Karabakh, was launched in January. It is presented as the fruit of long journalistic investigations in Karabakh, which is internationally recognized as part of Azerbaijan but which has been controlled by ethnic Armenian forces since the two sides fought a war in the early 1990s. The book concludes that Karabakh “today functions as ground zero for another form of war, the festering global epidemic of opiates, human trafficking and the sex trade, and an illegal arms industry that fuels conflict in every doomed region of the world.”

As evidence, the book cites a number of foreign government, NGO, and journalists’ reports, though those often don’t back up what the book claims that they do. Those sources are supplemented by the author’s own, frequently dubious, observations. In one chapter, the author claims to have stumbled upon a member of Stepanakert’s de facto parliament patronizing an open prostitution market.

The book’s origins are mysterious, and a number of elements raise suspicion. The author operates under a pseudonym, Harrold Cane, “amid safety fears.” Cane claims to have spent 18 months researching the book, including trips to Madrid, Moscow, Doha, Beirut, Paris, Washington, Sofia, Baku, Istanbul, Kabul and Tbilisi as well as multiple visits to Yerevan and Stepanakert. But it’s not clear who funded such extensive research and travel; the book is offered as a free download from a well designed website. (According to the website, hard copies will be offered for sale in February.) The website registration information is hidden.

In the book’s front matter, it claims to have been “Typeset by Simon Willis, Newbury,” but a search of the UK government’s business register doesn’t turn up any such typesetter in Newbury or anywhere else in the UK. (Eurasianet sent queries to the book’s Twitter account and to Cane’s email – published in the book’s promotional materials – but got no response by the time this piece was posted.)

The book is aimed at an international audience and its Twitter account regularly tags foreign media and organizations, including CNN, Foreign Policy, the BBC, Human Rights Watch. Thus far, though, that outreach seems to have borne no fruit and the only press the book and its claims has gotten has been in pro-government Azerbaijani media.

Curiously, the first follower of the Narco Karabakh twitter account was Tural Ganjaliyev, the newly appointed head of Azerbaijan’s government body representing Azerbaijanis displaced from Karabakh. Ganjaliyev also has “liked” a number of tweets from the account. He did not respond to a query from Eurasianet about the book.

The book was released at a sensitive time, as peace talks between Armenia and Azerbaijan over Karabakh’s fate appear to have been revived. It was launched just five days after the foreign ministers of Armenia and Azerbaijan met and, in an unprecedented statement, agreed “to prepare the populations for peace.”