With New Constitution, Is Karabakh Following in Azerbaijan's Footsteps? 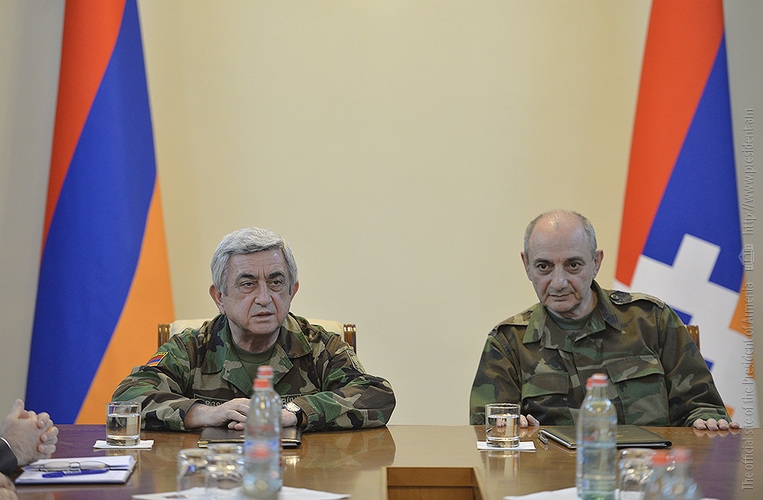 On February 20, the de facto republic of Nagorno Karabakh will hold a referendum on a new constitution that would change the form of government from semi-presidential to a fully presidential. It would also, as a result, allow incumbent president Bako Sahakyan to retain his post beyond the current limit of two five-year terms.

There appears to be sufficient public support for the new constitution. Most local political groups have endorsed it, with 20 of 33 members of parliament voting in favor. Proponents of the change emphasize the security imperatives governing the transition, in particular after last April's heavy fighting with Azerbaijan. According to its advocates, a fully presidential system is better suited to managing the continuing military stand-off with Azerbaijan. Azerbaijan has taken similar steps in recent years, eliminating presidential term limits and, last year, extending each term from five to seven years, effectively reducing the frequency of electoral distractions.

The change in Karabakh also calls for presidential and parliamentary elections to be held concurrently every five years. Since the local parliament was last elected in 2015, that would mean a three-year transition period, during which the president would be chosen by the parliament, until the new system kicked in. Few doubt that the parliament would elect Sahakyan to the post or that he could seek re-election in 2020.

Unlike past Karabakh leaders, Sahakyan has kept a low profile throughout his presidency. While he has genuine local support for addressing some of the many economic and social issues in Karabakh, as well as for his personal modesty, critics say this comes at the cost of excessive political loyalty to Armenia’s leadership. Unlike his predecessors, Sahakyan rarely represents Karabakh abroad and never publicly disagrees with Armenian President Serzh Sargsyan on controversial subjects, such as negotiations with Azerbaijan.

No wonder, then, that Sargsyan would want Sahakyan to continue in office. Both the current Karabakh constitution adopted in 2006 and constitutional draft under consideration were reportedly prepared by Hrair Tovmasyan, Armenia’s former justice minister and current parliament staff director. (By coincidence or not, Tovmasian’s latest draft prepared last year bears strong resemblance to the constitutional proposal expected to be adopted this spring in Turkey.)

The constitutional change in Karabakh has so far elicited few reactions among Armenia’s political class. But Sahakyan’s retention of the presidency can become a precedent for Sargsyan after the latter's own second term ends in 2018. In Armenia, with its transition to a parliamentary system, this could mean Sargsyan becoming prime minister or simply remaining the leader of the ruling party and managing affairs behind the scenes, as Bidzina Ivanishvili is widely believed to be doing in Georgia.

Developments in Karabakh fit with broader illiberal trends worldwide, but they also seem to underscore another tendency prevalent in the post-Soviet conflict areas. Having effectively separated and seeking recognition of the status quo, leaders of the unrecognized republics – consciously or not – tend to follow precedents set by the states they broke away from. Transnistria, Abkhazia and South Ossetia, like Moldova and Georgia and unlike their main sponsor Russia, have now all gone through series of leadership transitions via elections.

Karabakh officials like to point out their differences with Azerbaijan, pointing in particular to the latter's father-to-son succession and cult of personality politics. However, by bypassing constitutional term limits, they are now in effect following precedents set throughout the former USSR, Azerbaijan’s among them.