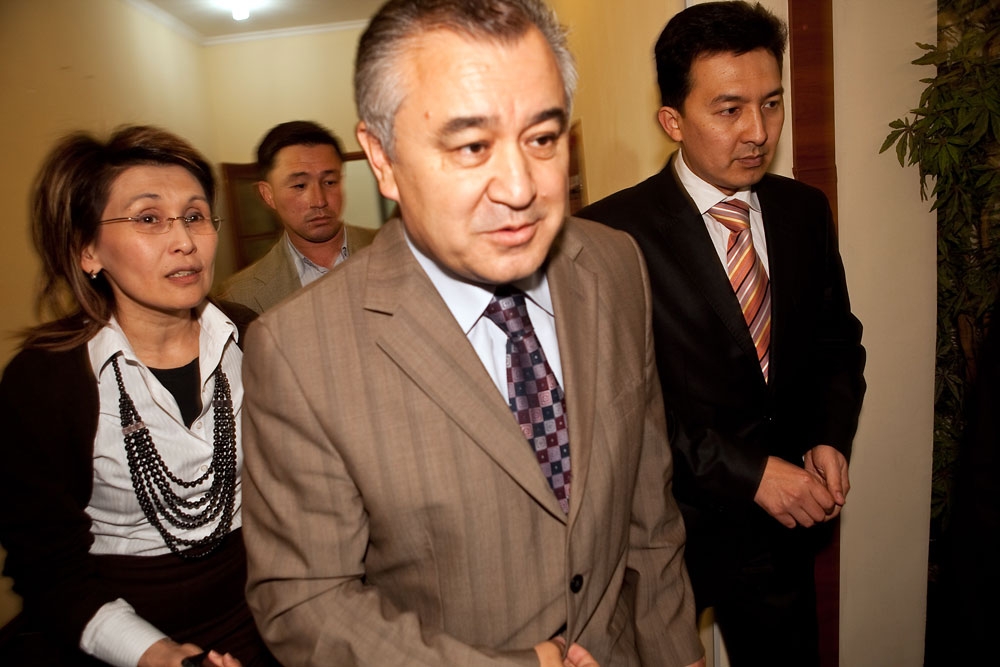 Omurbek Tekebayev, interim government first deputy for constitutional reform, arrives at a meeting of the Constitutional Council in Bishkek on May 4. (Photo: David Trilling)

Kyrgyzstan in the post-Soviet era has not had a president who has served out his elective term. A commission appointed by Kyrgyzstan’s provisional government has prepared a new constitutional blueprint that seeks to rebalance the distribution of powers, and, hopefully, provide for a greater measure of political stability than the Central Asian nation has known in its recent past. But legal experts and civil society activists are questioning the newest draft of the constitution, expressing doubt that it has sufficiently strong checks and balances to restrain what has proven to be a robust authoritarian tendency in Kyrgyz politics.

A team of 10 experts, headed by provisional government first deputy Omurbek Tekebayev, released a draft on April 26 that would transform Kyrgyzstan into more of a parliamentary, than presidential democracy. The executive branch, under the April 26 draft, would see its powers reduced at the expense of the legislature.

The latest attempt to craft a durable constitution in Kyrgyzstan is an outgrowth of the early April unrest that brought down Bakiyev’s administration. [For background see the EurasiaNet archive].The president, under the proposed draft, would take on more of a ceremonial role, with the primary responsibility for managing the government resting with a prime minister, much as it was theoretically handled in former versions of the constitution. Under the April 26 draft, the president would retain some responsibilities for foreign policy and personnel appointments, and foreign treaties and agreements would require the coordinated approval of the executive and legislative branches.

One of the more significant changes under the latest draft is that the president would lose the right to appoint all 13 members of the Central Election Commission. That key electoral body, moreover, would consist largely of civil society leaders. Another new wrinkle is a streamlined procedure for impeaching a chief executive.

In an attempt to prevent a preponderance of power from concentrating in the president’s hands, opposition parties would have the power to select one-third of the Central Election Commission’s members, as well as hold the deputy speaker's seat, and budget and defense committee chairmanships in parliament.

In what could create an interesting electoral conundrum, Tekebayev has said that no party would be able hold more than an absolute majority in parliament, no matter the outcome of the elections. At the same time, observers are criticizing his insistence that political parties must clear a 5-percent polling threshold in order to gain representation in parliament. Such thresholds are common Western European democracies, including Germany. Even so, domestic critics of the draft claim the 5-percent threshold is too high, and would keep new parties from entering the legislative body.

An appointive body of leading politicians and civil society activists, the 75-member Constitutional Council, is now reviewing the draft. At a meeting on May 4, the council agreed to divide into working groups and incorporate all suggestions by May 19.

The provisional government is planning a nationwide referendum for June 27.

Some civil groups are expressing displeasure with the draft, saying its language is vague in many key areas concerning the division of powers. A few are so unhappy that they have produced alternative versions, and they are calling for at least one variant to be put to a popular referendum, along with the official version.

One of the constitutional draft’s 10 authors, Nurlan Sadykov, the director of the Institute for Constitutional Policy, says the current draft provides key guarantees against any single party from gaining a dominating amount of power. That is because no government body or individual would be able to amend the constitution unilaterally, he explained.

Though the president’s powers are weakened, there is little to stop constitutional amendments from favoring another strongman, critics of the draft contend. The process of introducing amendments is poorly defined, asserted Sheradil Baktygulov, a legal expert with Guide Consultant Research Company. There are not enough checks and balances to prevent “someone trying to introduce new amendments to the constitution to give more power to a certain person or a majority of MPs to the ruling party,” he told EurasiaNet.org.

“[The president] may try to bring his own party to power and there is no guarantee that the same [authoritarian] system wouldn’t repeat itself,” Baktygulov said, adding that in the current draft it is unclear under what conditions the president would be able to dissolve the parliament and call for elections. The president appoints and holds the right to fire the prime minister and cabinet members.

Since the interim government abolished the Constitutional Court and the draft constitution does not specify what government body or agency would have final review authority, it is not clear how potential disputes among the executive, legislative and judicial branches might be resolved, says Christoph von Harsdorf, an international law reform expert in Bishkek. The draft also appears to lack a judicial mechanism that could specifically restrain instances of executive overreaching.

“I would advise [the constitution’s authors] to have a counterpart to executive power that could stop any type of executive power in the country, an institution that can say, ‘halt,’” said von Harsdorf.

“Power must always be controlled,” he added.

In the past, one of the greatest challenges to fair and transparent governance was the tendency of the country’s leaders to appoint family members and friends to positions of authority, irrespective of talent and skill, said Baktygulov of Guide.

“I don’t think [this constitution] will be successful because we do not have clear, separate powers between political appointments and professional civil servants. I’m afraid that a minister who will be appointed by parliament, approved by parliament, will again change up to 50-60 percent of the staff in every ministry, at every level,” he said.

He added that the constitutional draft provides for a system of apportioning parliamentary seats that could help prevent a single party or coalition from amassing total control. “Elections will be party based and the winning party will form the government and will make sure it works effectively without nepotism,” Sadykov said. “It is in their interest to work effectively in order to win during the next elections.”