Sadyr Japarov has not liked articles about his alleged ties to organized crime. 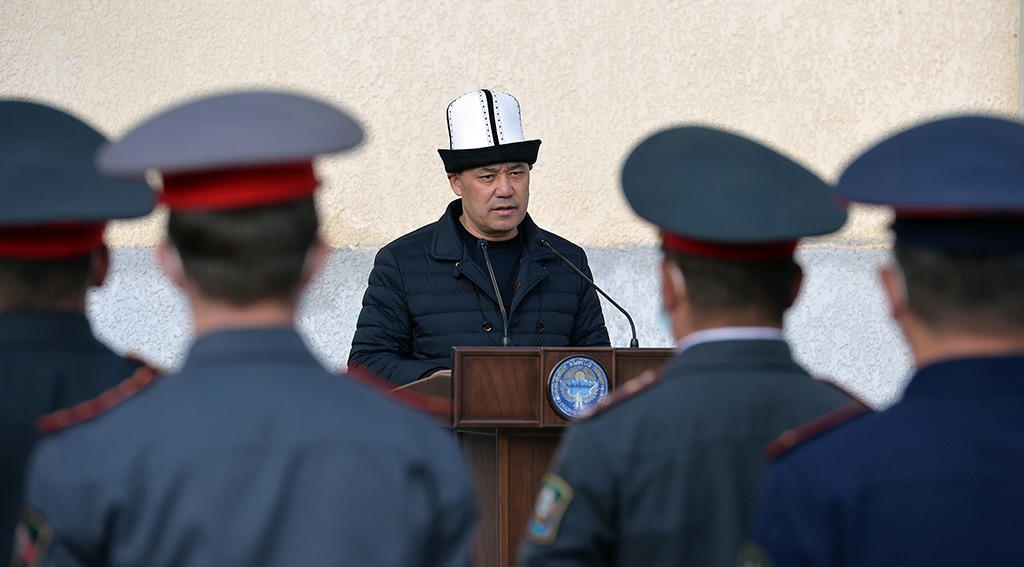 The populist is beginning to look unassailable in upcoming elections. (government handout)

Journalists and civic groups in Kyrgyzstan are demanding that acting leader Sadyr Japarov publicly endorse press freedoms while his supporters echo his barbs against a leading news service.

Over a dozen media outlets and non-profits signed a November 10 statement characterizing as “dangerous and irresponsible” Japarov’s complaints about the Kyrgyz arm of U.S.-funded broadcaster RFE/RL.

Japarov, who became both prime minister and acting president during a political crisis last month, accused the service, known as Azattyk, of “blackening” him in a recent interview with the privately-owned Region TV channel.

“They distort all my words and convey them to the people with a different meaning. It is not right,” he said.

Japarov alluded to Azattyk again at a meeting with media outlets to mark the professional holiday for journalists on November 6. “I’m talking about some journalists who aren’t at this table,” he said. Those journalists were deliberately twisting information “to put us in jeopardy,” he added.

Japarov did not mention specific reports during the two appearances. Last month he expressed irritation at articles speculating on his ties to organized crime.

Supporters of the populist, whose push to power amid political chaos last month was aided by a well-coordinated social media campaign, were quick to take the bait.

“Azattyk, these idiotic provocateurs, have turned into enemies of the people. These devils have nothing better to do than denigrate Japarov,” read one post in the Facebook group “Our President Sadyr Japarov” that was shared by hundreds of people.

The journalists’ statement warned that Japarov’s comments were fueling online harassment of reporters. “We call on the acting president to publicly acknowledge and reaffirm the role of a free media in a democratic society and refrain from discrediting journalists,” it said.

Japarov is set to leave his leadership posts at some point next month in order to compete in presidential elections scheduled for January 10.

He is already beginning to look unassailable in that contest and was given a further boost this month when Omurbek Babanov – a wealthy former prime minister with a sizeable base – said he would back Japarov instead of running himself.

Kyrgyzstan’s tension-filled elections can create difficulties for media. It was during the buildup to a 2015 vote that former president Almazbek Atambayev stoked ownership struggle over the country’s largest Russian-language newspaper, Vecherniy Bishkek. The court case that followed disenfranchised the paper’s owner Alexander Kim and moved his staff to start their own website, called Zanoza, or “thorn.” When Atambayev launched potentially crippling libel lawsuits against Zanoza, they set up another spiky website called Kaktus. The lawsuits were dropped after Atambayev left office.

Legal attacks on critical media have become a regular feature of the political landscape ever since.

Kyrgyz politicians tend to be more grateful for the existence of such outlets when they are in the opposition. Japarov, who was an opponent of the government for the last decade, acknowledged this much in his interview with Region TV.

He said he had been an avid reader of Azattyk “for the last 7 or 8 years” – three of which were spent serving a prison sentence on hostage-taking charges.

But his view seems to have changed not long after he was freed from jail last month by supporters who immediately began demanding then-President Sooronbai Jeenbekov step down in his favor.

Anna Kapushenko, editor-in-chief of Kloop, told Eurasianet that her staff were among the journalists attacked and intimidated by his supporters while reporting on those rallies.

Japarov said at the November 6 meeting with media outlets that he could not be expected to control his loyalists. “Kyrgyzstan has a population of six-and-a-half million and six million of them are my supporters,” he said, after lecturing the journalists on the importance of accurate reporting.

Kapushenko, who attended the meeting and signed the press freedom statement, said she is worried by what a Japarov presidency could mean for the media. “I don't think he will sue media until he has cemented his authority. But if he wins the election, he could pose a serious threat to journalists,” Kapushenko said.