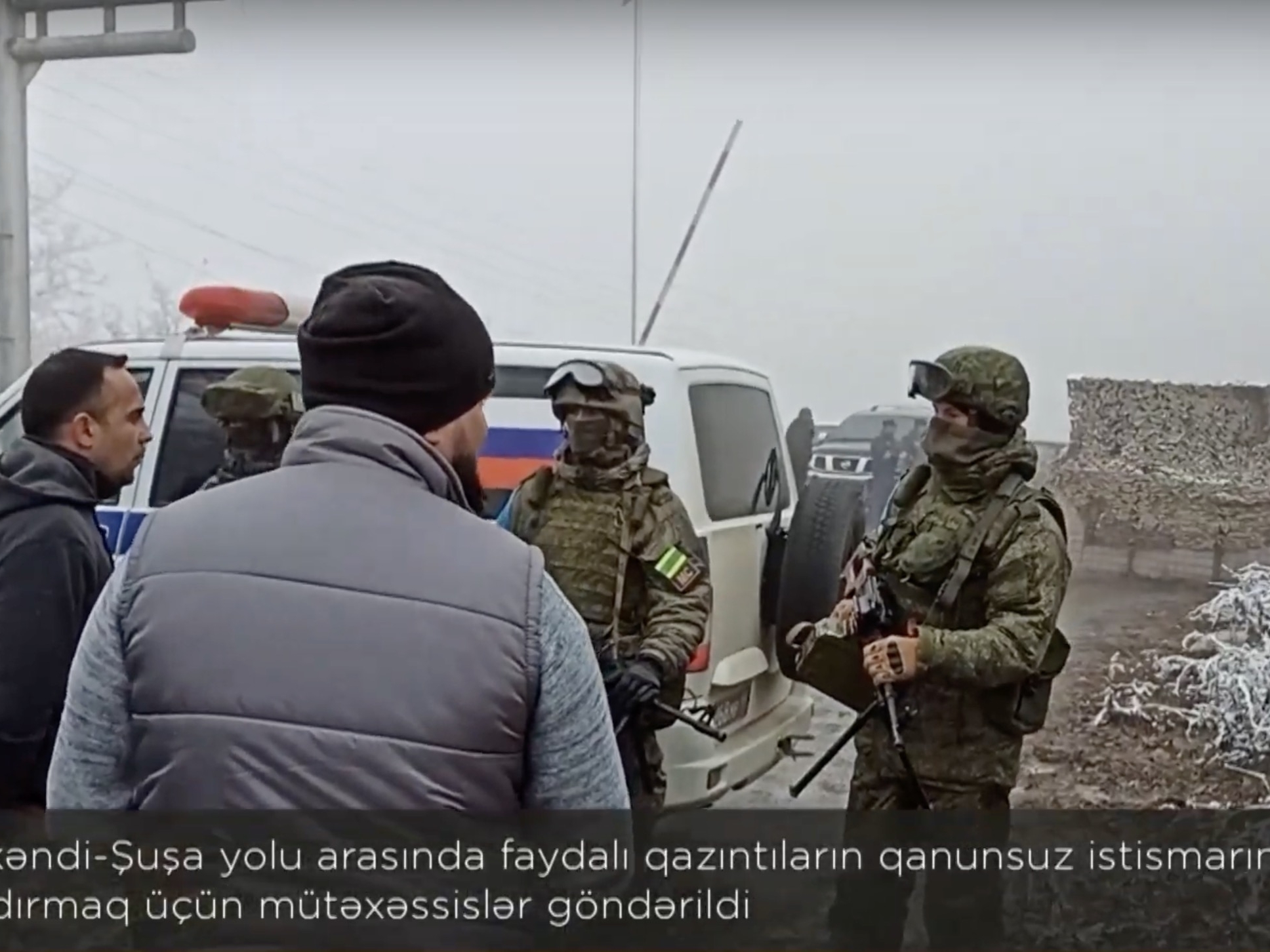 Azerbaijani public television was quickly on the scene.

Traffic on the only road into Nagorno-Karabakh briefly ground to a halt on December 3 after Azerbaijani officials moved to inspect vehicles traveling through the Lachin Corridor, amid growing pressure from Baku for Armenia to conclude an agreement recognizing its sovereignty over the Armenian-populated region.

Officials in the self-proclaimed government of Nagorno-Karabakh said that a group of Azerbaijanis in civilian clothes closed the road connecting the territory to Armenia late in the morning near the city of Shusha. The move meant that “120,000 people are now under blockade” and that it could be a prelude to “humanitarian disaster and ethnic cleansing,” Artak Beglaryan, a senior de facto Karabakh official, said in a statement.

Eyewitnesses reported cars being held for up to three hours along the route, which runs from the Armenian border through Azerbaijani-controlled territory to Stepanakert, the de facto Karabakh Armenian capital.

The Lachin Corridor has been under the supervision of Russian peacekeepers since the ceasefire that ended the 2020 war between Armenians and Azerbaijan. But in recent weeks Baku has repeatedly claimed that the road has been used to bring in military hardware, including landmines, in contravention of the ceasefire agreement.

Azerbaijani officials also have recently accused the Armenian side of using the road to export illegally extracted minerals from Nagorno-Karabakh.

Three days earlier, the news channel Caliber, which is connected to Azerbaijan’s Defense Ministry, reported that it had obtained evidence that precious metals were being extracted from gold mines in Armenian-held territories in Karabakh and transported along the Lachin Corridor to Armenia. Russians and Armenians were conspiring to “steal the resources of our homeland, and the Lachin Corridor is serving as an entryway for military criminals and marauders,” the Caliber report concluded.

Meanwhile, Azerbaijani officials launched a PR campaign against the Russian peacekeepers for using Armenian place names in the region. And talk show panelists on the country’s popular CBC TV channel said that the Russian peacekeeping mission had “failed” and urged their government to take control of the road.

Following the road closure, Azerbaijan’s Ministry of Ecology and Natural Resources confirmed that officials had entered the area in connection with a dispute over gold mining, the news agency APA reported.

“At around 11.00 am, employees of the Ministry of Ecology and Natural Resources of the Republic of Azerbaijan… and the "AzerGold" Joint Stock Company moved in the direction of Khankandi,” APA reported, using the Azerbaijani name for Stepanakert. “Currently, the operation of a group of experts is being discussed with the command of the Russian peacekeeping forces temporarily stationed in the area, in order to investigate and monitor the illegal exploitation of minerals and the resulting environmental damage.”

“There have been lots of violations,” a senior Azerbaijani government official told Eurasianet in the wake of the road closure. “The latest was the movement of arms and a group of 14 Iranians entering Khankandi. The Russian peacekeepers are tired of the Armenians acting like they owe them everything.” Baku alleges that Armenian forces have brought landmines manufactured in 2021 to the region, while Yerevan denies the claims and insists that the anti-personnel mines shown in Azerbaijani media were taken from inside its own territory, near the city of Jermuk, by Baku’s forces when they launched an offensive across the border in September.

In a separate statement, officials in Stepanakert dismissed the environmental concerns as “fake.”

“The commanders of the Russian peacekeeping force continue to conduct active negotiations with the Azerbaijani side in order to reopen the road,” the statement added.

After several hours of talks, the standoff was apparently resolved, and reports from the scene said that the flow of traffic resumed by before 4 pm. According to Azerbaijani media, its officials were invited to discuss environmental monitoring issues in Stepanakert.

Speaking to Eurasianet, Beglaryan, who had previously served as the breakaway region’s state minister, said that “we are concerned about further escalation and we see the signs and pretext for new aggression by Azerbaijan. Today’s events, and many other violations of human rights and international norms have happened because of the impunity of previous violations,” he added, calling on the international community to impose sanctions on Baku.

­­Inside Azerbaijan’s internationally recognized borders, Nagorno-Karabakh has been controlled by its ethnic Armenian majority since a war that followed the fall of the Soviet Union. In 2020, Azerbaijani forces rolled across the fortified demarcation line, taking back large swathes of territory before a Moscow-brokered peace agreement stopped the offensive. Under the terms of the deal, the Karabakh Armenians handed over several settlements along the Lachin Corridor, as well as the road that had previously linked the region to Armenia. In its place a new route, slightly further south and largely constructed by Azerbaijani workers, opened to traffic in August.

Azerbaijani President Ilham Aliyev has repeatedly expressed frustration that the Lachin Corridor remains open while Yerevan refuses to give up a 35-kilometer stretch of land in the south of Armenia to use as a connection between his country’s mainland and its exclave of Nakhchivan. Baku argues that the creation of the so-called sovereign “Zangezur Corridor,” without border posts or customs checks, was a part of the 2020 ceasefire deal. Armenia, meanwhile, argues that it is only obliged to reopen the border to traffic from the neighboring former Soviet Republic.

“The Zangezur Corridor is the responsibility of Armenia,” Aliyev said during a speech in November. “For two years, we have not been interfering with the cars moving from Armenia to Karabakh and in the opposite direction along the Lachin road. […] How much longer are we supposed to wait?” In recent days, Aliyev announced that he was holding talks with Moscow instead of his counterparts in Yerevan on the issue, describing Armenia as a Russian “satellite country” whose independence is merely “symbolic.”

“Diplomatic options have almost been exhausted,” one Azerbaijani official told Eurasianet at the time, speaking on condition of anonymity. “What if we were to install a [border] post at the entrance of Lachin and finish the whole process? How can you breathe with no air?”

Armenia and Azerbaijan have held intensive high-level talks over the past several months, following fierce border clashes in September. Baku is calling for Yerevan to accept Azerbaijani sovereignty over all of Nagorno-Karabakh, agree on the demarcation of their shared border and allow for the operation of the Zangezur Corridor.

Despite signals that Armenian Prime Minister Nikol Pashinyan was preparing to sign an agreement that would recognize the breakaway region as Azerbaijani territory, in September he said that “no document has been signed or is being prepared to be signed” as protestors took to the streets of Yerevan to demonstrate against the purported decision.

The negotiations have stalled somewhat, and despite earlier predictions that a peace agreement would be signed by the end of the year, both sides have since played down the chances of a breakthrough. Azerbaijan pulled out of a planned summit meeting in Brussels on December 7 over a dispute whether French President Emmanuel Macron, whom Baku accuses of being pro-Armenian, would be at the meeting.