While the new de facto president praised ties with Russia, he did not mention the referendum that his predecessor called on his way out of office. 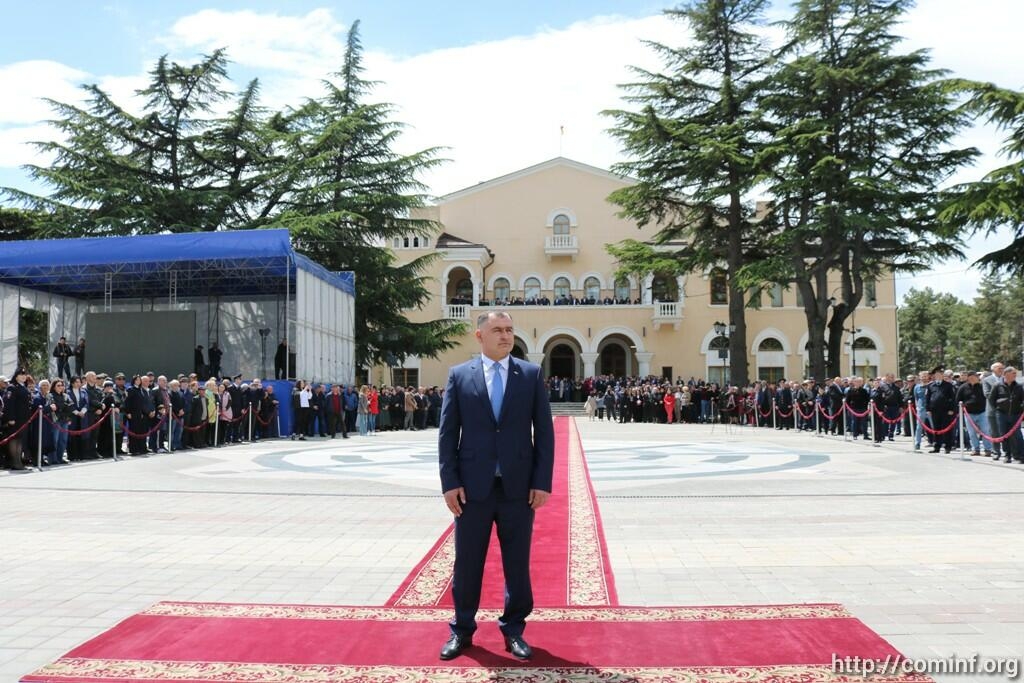 South Ossetia’s new de facto leader has taken office as the issue of the territory joining Russia seems to be slipping off the agenda.

Alan Gagloev, who won the presidency of the self-proclaimed republic on May 8, was formally sworn into office on May 24. In his inaugural address, he praised South Ossetia’s strategic relationship with Russia but did not mention the referendum on joining Russia that the territory is, in theory, holding in two months.

Allied relations and integration with Russia are “the main vector of our republic’s foreign policy,” Gagloev said. “We will never forget that it was precisely Russia who came to help South Ossetia in the fateful hour and defended the Ossetian people from annihilation,” he said in apparent reference to the 2008 war between Georgian, Ossetian, and Russian forces over the territory.

But Gagloev said nothing about the referendum that his predecessor, Anatoliy Bibilov, scheduled for July 17 on joining Russia. The prospects of that vote already appeared murky, given the fact that Bibilov had already lost the election and that neither Gagloev nor Moscow itself had expressed much interest in it.

Peskov reiterated that point following Gagloev’s inauguration. “No steps are being taken or planned by the Russian side connected with this,” he told reporters on May 24 asking about the fate of the referendum.

Russia is South Ossetia’s main financial and military patron and one of the few countries that recognizes it as an independent state. Most of the rest of the world considers South Ossetia to be a breakaway region of Georgia.

In his comments, Peskov added that there may be legal problems with the way that the question on the referendum – “Do you support the unification of the Republic of South Ossetia and Russia?” – is worded.

“If you seriously approach this then you need to work out the legal issues, because if we understand it correctly, legally the question on the referendum is formulated as the unification of the Republic of South Ossetia and Russia,” Peskov said. “If unification means we are talking about the creation of some third state, then of course that is impossible. So, of course, we need to think a little bit about the formulation.”

That reiterated concerns that have also been voiced in South Ossetia itself. “The question asked in the referendum is not correct, there are some ambiguities,” journalist Murat Gukemukhov told news website Caucasian Knot. “What does unification mean? Unification in a union state or entry into Russia? Or maybe some kind of economic unification or entry into Russia? South Ossetian law directly prohibits referenda on questions that can raise ambiguities.”

In any case, Gukemukhov said, “Russia is annoyed about this. Gagloev indicated that there is a treaty between Russia and South Ossetia according to which Moscow and Tskhinvali conduct a coordinated foreign policy. That is, the initiative should have been coordinated with Moscow from the beginning, which didn’t happen.”

While the question of the Russia referendum has been the focus of outside observers, inside South Ossetia itself the focus was on more domestic issues.

Many hope that Gagloev will prove a less authoritarian ruler than was Bibilov. Alik Pukhayev, an Ossetian commentator, wrote on Twitter that he hoped Gagloev would undertake an “investigation into the activities of Anatoly Bibilov, the investigation into the murder of Inal Dzhabiev and bringing all police officers to justice, and a series of economic reforms.”

The newspaper Respublika wrote that “the economy is the main problem of the new authorities, especially in the conditions of the growing frugality of our main financial sponsor Russia,” RFE/RL reported.

“The current system in general allows impunity for officials, security officers, judges, so reforms are needed, otherwise it’s all going to repeat itself,” RFE/RL wrote in another piece, headlined “Expecting a thaw.”