Some voters feel manipulated by being asked to play along in the choice-free election. 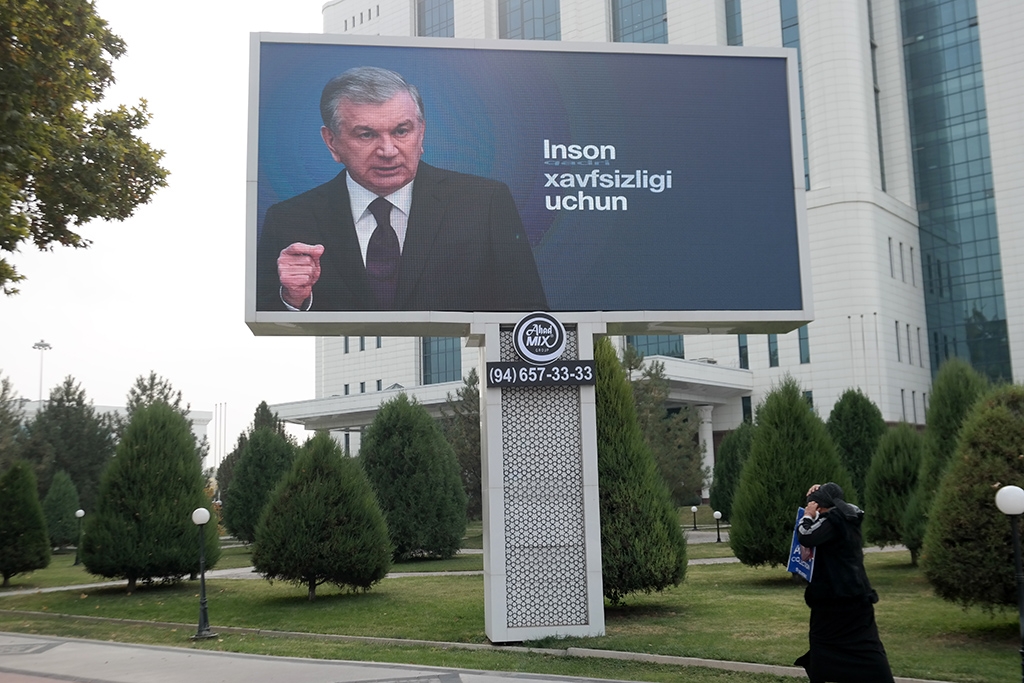 The vote on October 24 will not be a nail-biter. (Paul Bartlett)

As President Shavkat Mirziyoyev swung through Bukhara on the campaign trail in mid-October, students sporting T-shirts and baseball caps emblazoned with his name sat under a mulberry tree beside the pool at Lyabi Hauz in the heart of the old town.

These first-time voters professed themselves eager to cast their ballots for Mirziyoyev “because he’s our president and we love him,” enthused 19-year-old Jurabek Mehmonov.

They had been given the clothing at an event ostensibly unrelated to the presidential election to be held on October 24. That looked like a classic case of using “administrative resources,” or abusing the trappings of power to promote the incumbent.

The students’ sentiments, not uncommon among voters that Eurasianet reporters quizzed around Uzbekistan, will help propel Mirziyoyev to a crushing victory against four stalking horses.

It is a safe bet that he will top the 89 percent he received when he was first elected in 2016.

Mirziyoyev’s popularity is genuine, even if it is hard to gauge how deep it runs in the absence of reliable polling and genuine political alternatives.

Voters recite a litany of achievements from the president, from greater freedom of speech to economic liberalization and a new era of harmonious relations with neighbors.

But voters talk approvingly of the focus on public welfare from a president who positions himself as in touch with the concerns of ordinary people, unlike his tyrannical predecessor, Islam Karimov.

“I’m voting for Shavkat Mirziyoyev, because everything is changing,” enthused Joshqin Polvonov, a portrait painter plying his trade on a pedestrian thoroughfare popularly known as Broadway in downtown Tashkent.

Yet, as this election starkly exposes, there is one thing the president has not delivered since embarking on an era of reform hyperbolically dubbed the “Uzbek Spring.”

That is political plurality.

Uzbekistan’s 21 million voters will choose between Mirziyoyev and four ostensible challengers representing pro-government parties that sit in what is still a rubberstamp parliament, despite pledges to beef it up.

Many see this as a missed opportunity from a president whose manifesto pledge is to build a “new Uzbekistan.”

“Uzbekistan could have shown its genuine commitment to meaningful reforms by allowing presidential candidates who don’t share the government’s views to participate in upcoming elections – but it did not,” Hugh Williamson of Human Rights Watch said recently.

That would have scored points with Western election observers, who have noted a lack of “direct or meaningful engagement between contestants” in this election, among other problems.

Tentative attempts to field opposition candidates have collapsed amid claims of intimidation and violence.

The government rejected an application from Khidirnazar Allakulov, a maverick anticorruption whistle-blower, to register his Truth and Progress party over claims of invalid paperwork.

Allakulov and other figures who flirted with running for the presidency have little public recognition and could not conceivably present a threat to Mirziyoyev, analysts say.

Nevertheless, although weak, they present “an extra headache” for him, said Nigara Khidoyatova, who tried to engage in opposition politics in Karimov-era Uzbekistan before fleeing into exile.

The president fears unpredictable consequences if he relaxes his stranglehold on the political process, said a Tashkent-based political analyst on condition of anonymity.

“Even if they permitted some non-tame opposition leader to take part in the elections, [that person] would have little chance of winning. But still the authorities have decided not to test fate,” he told Eurasianet.

At root is “a pathological fear of losing power.”

They may also fear a less apocalyptic scenario.

The presence of opposition could generate protest votes, the analyst said, if electors could express disaffection through the ballot box.

Some would welcome a more competitive environment.

Bakhtiyor Jamilov, a voter in southern Qashqadaryo Region, said he would opt for Alisher Qodirov, the socially conservative leader of the Milliy Tiklanish (National Revival) party, “although I understand he has little, or almost no, chance.”

“Of course Mirziyoyev is the leader and he has authority. But a new person should become president, then competition in the fight for power will emerge,” the 36-year-old builder explained.

Qodirov has earned the nickname the “Uzbek Zhirinovsky,” after Russia’s clownish nationalist leader Vladimir Zhirinovsky, for his propensity for making scandalous statements.

In one outburst earlier this year, Qodirov called for Uzbekistan to deport gay people. During the campaign, he proposed taxing the income of Uzbek labor migrants, whose remittances prop up the economy and are already taxed abroad.

It looks more like populist posturing than meaningful campaigning, but Qodirov has his fans.

Tashkent student Nuriya Madaliyeva said he would get her vote because of his championing of the Uzbek language and opposition to Uzbekistan joining the Russia-led Eurasian Economic Union.

“I have not seen any lively debates among the presidential candidates,” complained Kumar Begniyazova, a lecturer in Nukus in northwestern Karakalpakstan.

“I expected the candidates from the other parties to analyze the five-year term that the current president has been in office,” but they did not deign to do so.

Candidates failed to turn up in person for TV debates, instead sending proxies to “mumble terms learned by heart or read off paper,” the Podrobno.uz news site remarked. Still, the audience applauded obediently.

Apathy in the face of a foregone conclusion and frustrations over the lack of real political alternatives may lead some voters to stay away from polling stations.

With a high turnout seen as a badge of legitimacy, officials are working hard to bring out voters.

As well as billboards and a stream of SMS messages urging people to go to the polls, volunteers are calling on households to urge the electorate to do its civic duty.

But some voters feel manipulated by being asked to play their role in what is essentially a choice-free election.

For Jamilov, the builder voting against Mirziyoyev, it is just a “political game.”