Russia usually stays out of the Caucasus information wars, but the crisis in Ukraine is re-igniting disputes over who is to blame for Georgia’s frozen conflicts. 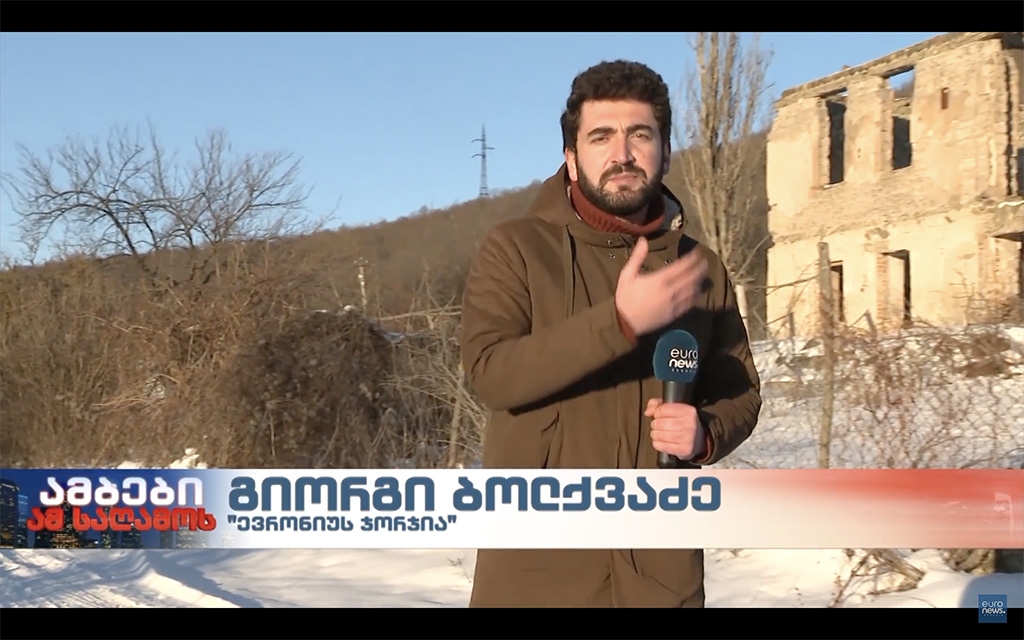 Unlike most other parties to conflicts in the Caucasus, Russia generally takes a hands-off approach to international press coverage.

While one-sided coverage – perceived and real – is regularly met by angry social media posts and swift condemnation by foreign ministries around the region, Russia is almost always silent on this front. Perhaps accepting the inevitability of unfavorable press coverage, it has effectively surrendered in the Caucasus information war.

Which made it all the more noteworthy that Russian Foreign Minister Sergey Lavrov, who has a lot on his plate at the moment, apparently had time to both watch and stew over a report from Euronews about South Ossetia.

The report was a dispatch from the de facto boundary line between Georgia proper and South Ossetia, the breakaway region over which Georgia and Russia fought a war in 2008. Following that war, Russia formally recognized South Ossetia as an independent state, and heavily backs it both financially and militarily. In recent years, Russians and South Ossetians have been hardening what they consider the international border with Georgia. Georgian villagers near the line are regularly detained if they stray into what Russian border guards – who guard the de facto boundary – consider South Ossetian territory.

That process has been the subject of dozens or hundreds of stories in recent years by virtually every international major media, which tell essentially the same story, and almost always entirely from the Georgian perspective. For the most part, Russia deems these stories not worthy of comment.

But it was mild-mannered Euronews that finally got Lavrov to snap.

During a joint interview on January 28 with several Russian media, Lavrov was asked about international sanctions against Russia resulting from the poisoning of anti-corruption activist Aleksey Navalny. He began with a lengthy aside.

“I’m going to start a long time back. Yesterday I was watching Euronews, and there was a report about the village Dvani in Georgia, near the South Ossetian border. It is on territory that Georgia considers its own,” Lavrov said. The foreign minister went on to describe the report in some detail. “’Fourteen years have passed since the war that forced people to live in difficult circumstances. Almost every day they lose their land. People are kidnapped, Russian soldiers detain them,’” he said, paraphrasing the report.

“But here they don’t say what kind of separatism appeared in Georgia before the collapse of the Soviet Union. Zviad Gamsakhurdia [the first president of post-Soviet Georgia] chauvinistically demanded that the Abkhazians get out or Georgianize themselves. He didn’t consider South Ossetians to be human. Nobody talks about that now.”

He went on: “Then there was a brilliant phrase: ‘In 2008, when the conflict entered the hot phase, Russia took the side of South Ossetia.’ This is Euronews, which claims to be the most objective network, taking into account a diversity of perspectives. Talking about this fratricidal conflict, they don’t even mention who started it.” The conversation was then steered back, a bit unevenly, to Navalny.

Lavrov’s point was both textbook whataboutism, and not wrong: two Georgian researchers made largely the same point in a recent report for Carnegie Europe. Lavrov was not a good faith critic, but was “smart to choose to go into the early 90s to justify or avoid the status quo in Dvani: Gamsakhurdia-time ethnic nationalism is a vulnerability for Georgians who refuse to face his actual legacy,” wrote journalist Shota Kincha on Twitter.

The comments were particularly noteworthy as a rare high-level intervention from Moscow on the discourse around Georgia’s frozen conflicts. The name “Gamsakhurdia” seems not to have been publicly mentioned by a senior Russian diplomat since 2013, according to a search of the foreign ministry’s website. Anti-Georgia statements from Russia are usually relegated to the lower ranks of nationalist media and marginal pundits.

The context of Lavrov’s comments, of course, is the crisis over Ukraine and the inevitable comparisons that are being made with the 2008 war with Georgia. “In parallel with the events in Ukraine, the Russian creeping occupation is still a serious problem for Georgia,” went Euronews’ subheadline.

Those comparisons are rife now in Georgia, where pro-western Georgians have been expressing their solidarity with Ukraine on media ranging from pizza boxes to ski slopes, while the government in Tbilisi is trying not to rock the boat for fear of retaliation from Moscow. The opposition, meanwhile, is pushing the government hard to take a more forceful stance against Russia.

Amid all this stir, there is other movement on Georgia-Russia relations as well.

In a January 21 statement, the Russian foreign ministry reiterated its position that it will not allow direct flights to and from Georgia until Tbilisi acts to stamp out “Russophobia” in the country. It instituted the flight ban in response to anti-Russia protests in Tbilisi in 2019.

That statement didn’t seem to be timed to anything more specific than a journalist asking about it. But then followed a curious episode in which flag carrier Georgian Airways announced, and then quickly canceled, a single direct charter flight between Moscow and Tbilisi, that was to have flown on January 28. Both the Russian and Georgian sides subsequently blamed the other for the cancellation; the head of Georgian airways said that Russia revoked permission because of the “agitation” the announcement of the flight occasioned in Georgia. In any case, it wasn’t clear what might have led Moscow to allow this flight – and why only one – in the first place.

There wasn’t any obvious connection between the flight episode and Russia’s deepening conflict with Ukraine, Europe and the United States. But while the focus from Moscow has been directed mostly to its west, Lavrov’s comments suggest that the festering crisis is also affecting, at least indirectly, its relations to the south as well.