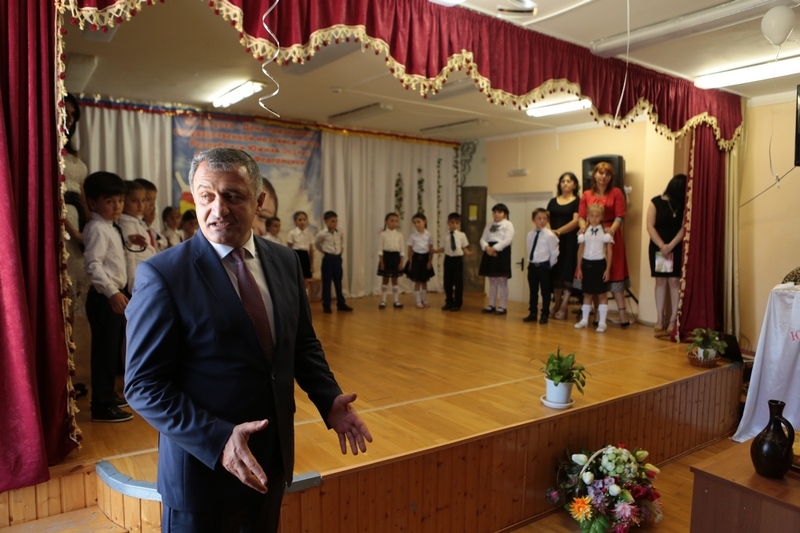 The school year has just begun in South Ossetia, but it could prove to be a strange one for the territory’s few remaining ethnic Georgians.

From this year onwards, all Georgian-medium schools in the self-declared republic are to shift to the Russian language (Georgian will remain an elective subject).

The change is to begin gradually, starting with the first to fourth grades, with an additional grade to transfer to Russian-language education each subsequent year,  the territory’s de-facto minister of science and education Natali Gassiyeva reported in August.

In an interview with the news site South Ossetia Today, Deputy Education Minister Elisa Gagloeva said she hoped that Russian-language education would aid Georgian children to eventually find a place in South Ossetia’s universities. Gagloeva added in a July interview for Nykhas that the territory’s Georgian-language schools continued to use textbooks from Tbilisi, and that the de-facto authorities simply did not have the resources to translate their own curriculum into Georgian.

Of the territory’s 53,532 inhabitants (according to its last census, conducted in 2015), some 3,966 are ethnic Georgians, making them the second most numerous ethnic group. While most of its Georgians have fled the territory, 2,337 still live in the Akhalgori district, where they comprise 55% of the local population.

The authorities in Tskhinvali only consolidated control over the area during the Russo-Georgian war of 2008 -- after which South Ossetian leader Eduard Kokoity visited the regional capital of Akhalgori to guarantee its many ethnic Georgian residents their safety. The de-facto authorities subsequently renamed the town Leningor (as it was known in the Soviet period), center of the Leningor District.

Of the district’s 11 schools, only six were Georgian-medium, and that class sizes were very small, reported the recently detained Akhalgori civic activist Tamara Mearakishvili in an interview with Ekho Kavkaza. She added that while local Georgian teachers would rather try to cope with the change than risk dismissal, their Russian-language skills may not be sufficient for teaching more complex subjects to older classes in years to come.

Anatoly Bibilov, de facto president of South Ossetia, argued that the change was necessary because “the population of the [Akhalgori district] must feel themselves part of South Ossetia, rather than Georgia […] we live in one state.” Bibilov stressed that this did not amount to a ban on the Georgian language itself. In June, Bibilov appointed a new head of the Akhalgori district, Filip Khachirov, and noted that many of the area’s residents frequently lived and worked in Georgia; creating the conditions for them to stay, he added, was of paramount importance.

It seems that Bibilov may have been inspired by his counterparts in Sukhumi. This year, sixth graders in the 11 Georgian-language schools in the Gali district of Abkhazia, the other breakaway region of Georgia, are transitioning to Russian-language medium, continuing a process launched in 2015 for the 1st to 4th grades. Full Russification of the school system is expected to be finalised by 2023.

Georgian government officials have criticized the move. Minister for reconciliation and civil equality Ketevan Tsikhelashvili and Tbilisi’s head of the Akhalgori district in exile Nugzar Tinikashvili both decried the South Ossetian move as discrimination in a report in EADaily. A recent op-ed in Georgia Today quotes political analyst Mamuka Areshidze as saying that the changes are meant to encourage the region's Georgians to leave.

Some of the region’s residents have indeed interpreted the move as an attempt to encourage them to leave Akhalgori, reported Murat Gukemukhov in Ekho Kavkaza.

He also remarked on a historical irony — one of the complaints of ethnic Ossetians in Soviet Georgia was the relative lack of Ossetian-language schooling. As for the place of the territory’s second official language, Ossetian, in today’s classrooms -- the outlook remains dire indeed.