Humans have rehabilitated a small part of the disappeared Aral Sea. For now. 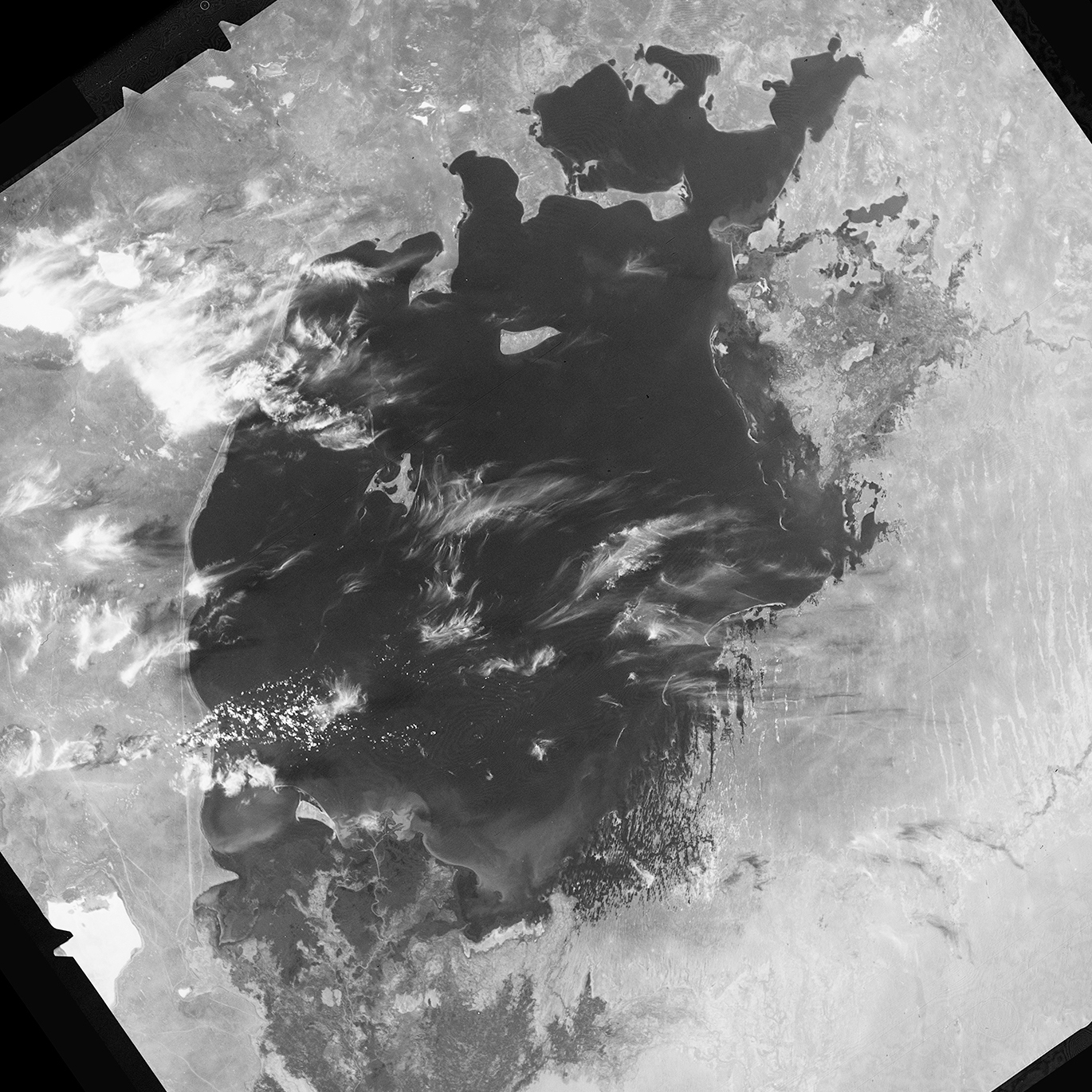 The Aral Sea photographed by a U.S. government satellite on August 21, 1964 (public domain)

The coastline vanished from his village long before Kenzhetay Akseitov was born. With it went the fishing that had once been the backbone of the local economy, leaving the nearby salt works as the only job around when Akseitov was a boy. The dust remaining where a sea had been, full of agricultural chemicals, filled the air.

“I grew up knowing that the life expectancy for me and other men would be lower [than for previous generations]. I remember as a kid seeing videos of people born around the Aral with illnesses,” Akseitov told Eurasianet.

For the past 15 years, however, on the flat, dusty plains, fishing has made a comeback. The pike perch (Sander lucioperca), with its tender flesh and few bones, has returned in commercial numbers. So has carp.

The numbers, of course, are far smaller than the Aral Sea fisheries’ heyday, when they annually packed 40,000 tons of fish to be enjoyed across the Soviet Union and beyond. A mosaic in the local train station boasts of a telegram from Vladimir Lenin himself thanking the Aral fishermen for providing sustenance during famine in Russia.

For decades the Aral Sea has been a poster child for unparalleled environmental disaster.

The decimation began in the late 1950s when Soviet leader Nikita Khrushchev decided to dramatically expand Central Asia’s agricultural output. Engineers diverted the two major rivers feeding the lake, once the world’s fourth largest, to farm the desert. By some accounts, they knew the Aral would, within a few decades, wither into a brine puddle incapable of sustaining fish. That’s exactly what happened. Between 1960 and 2004, the Aral shrank 91 percent by volume and split into several parts. By then, it had retreated 75 kilometers from Aralsk, once a major port near Akseitov’s village. The salty water that remained barely supported life.

Even as some water near Aralsk has returned, the rest of the Aral has kept shrinking over the past two decades.

After independence in 1991, the new countries of Central Asia struggled to agree on how to tackle the problem. The two rivers – the Syr Darya and the Amu Darya – cross all five ex-Soviet Central Asian republics; the Aral itself straddled the Kazakh-Uzbek border. Finally, Kazakhstan alone approached the World Bank, which financed a dam to catch the last drips of the Syr Darya in a small basin that was once part of the vast Aral, forming the Northern Aral Sea.

The 13-kilometer Kok-Aral dam was completed in 2005 as part of an $86 million “phase-1” project that included upstream work to remove bottlenecks on the Syr Darya. The dam raised the water in the Northern Aral by 4 meters, reduced salinity by 50 percent, according to the World Bank, and brought the sea about 50 kilometers closer to Aralsk. More was planned.

“The Kok-Aral dam brought back jobs to the region,” Zauresh Alimbetova, head of the nearby Barsakelmes wildlife refuge, told Eurasianet. “People in towns closest to the sea are almost entirely working in the fish industry [again]. With these renewed industries, people’s quality of life is improving.”

The Northern Aral filled faster than most people expected. But it has now been 10 years since the waters reached the top of the Kok-Aral, and locals say they no longer believe promises it will be raised higher. Some even fear the existing dam is doomed.

“It's entirely full and the dam can’t handle it,” said Bolat Nurkhozhaev, a member of the regional public council, a group nominated by non-governmental organizations to interface with the government.

“There is a lot of talk” about raising the dam, said Nurkhozhaev, “but no definitive action: The pandemic and the economic crisis is stalling it even more.”

In the early 2010s, the World Bank and the government of Kazakhstan engaged in what a bank report called a “laborious dialogue” about next steps, ultimately agreeing to spend $300 million on second and third phases. The second phase would raise the Kok-Aral dam another 6 meters between 2015 and 2021, which could bring the sea within 1 kilometer of Aralsk. The third phase, between 2017 and 2022, would replace canals in the Syr-Darya basin to better manage the river.

Some blame Kazakh bureaucracy; others Uzbekistan. Tashkent has never condoned work to restore the Northern Aral.

This May, worries about ignoring the project took on new urgency when a poorly constructed dam at the Sardoba reservoir in Uzbekistan crumbled during spring flooding, inundating several villages across the border in Kazakhstan.

Asked to comment, a World Bank spokesperson would not address concerns about the Kok-Aral dam’s structural soundness, only saying that “preparations” for phase 2 restarted in 2019, having been “delayed after 2014 because the regional parties could not reach a consensus on the approach.” Repeated attempts to reach Kazakhstan’s representative at the International Fund for Saving the Aral Sea (IFAS), a regional intergovernmental body established in 1992, were unsuccessful.

Yet Vadim Sokolov, Uzbekistan’s IFAS representative, was unreserved about what he sees as the Kazakhs’ intransigence.

“Now they [the Kazakhs] are telling everyone how great they are – ‘we fixed it’ – when in reality, the dam structure is in an emergency state,” Sokolov told Eurasianet.

Sokolov laments the lack of cross-border cooperation, admitting that lots of talk achieves little: “Each country pushes its own agenda and doesn't listen to its neighbor; we haven't learned how to do that,” he said. Yet he admits to admiring the Kazakhs’ initiative: “On one hand, they got the funding on time and began to do something when no one else was doing it, but it should be tackled in a smart and collaborative way.”

“Uzbekistan has always objected to these projects,” Sokolov continued. “Kazakhstan woke up only after the Sardoba accident. […] We're going down the wrong path, and if that continues, we will lose the Aral altogether, and accidents like Sardoba are very likely to happen in the future, in both territories. But if we listen to each other we can prevent these problems.”

Signs of illness, trees of life

For locals, the dam has done little to assuage concerns about their health.

People describe increasingly frequent and intense salt storms, respiratory problems, children born with muscular-skeletal disabilities and other illnesses, even since the Northern Aral returned. “In the past, the sandy winds would come once or twice a month, now they occur almost daily,” said Nurkhozhaev of the regional public council. Researchers say the winds also contain pesticides and herbicides used to grow cotton upstream.

About the only thing governments in Kazakhstan and Uzbekistan agree on is the utility of the spindly saxaul tree (Haloxylon ammodendron), one of the few plants that will grow in the salty soil. The saxaul’s roots hold the soil in place. It also helps absorb the winds. Everyone knows that nothing will bring the Aral Sea back completely. But both governments agree on the need to plant thousands of acres of saxaul in the ever-expanding desert.

David Trilling contributed reporting. With thanks to Edward Boyda of Earthrise Media for locating and sharing the satellite imagery.