Last year’s war between Armenia and Azerbaijan could shake up trans-Caucasus trade, which has been dominated by Georgia for decades. 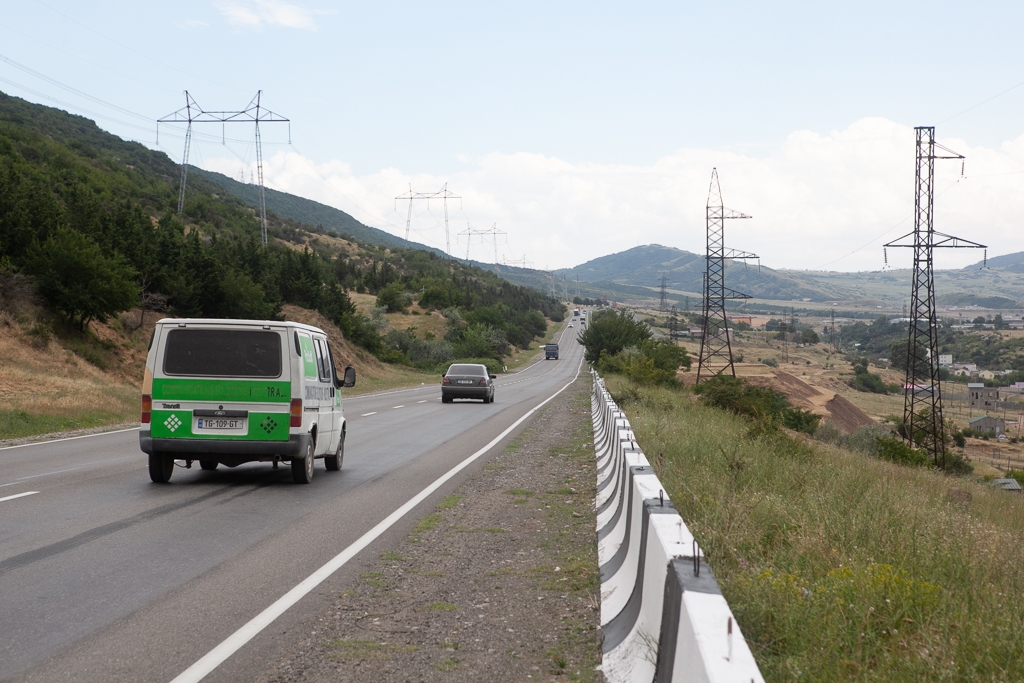 Georgia’s role as a gateway has been defined by politics as much as geography. (photo: David Trilling)

A tired trope has it that Georgia is a crossroads of trade and culture, a place where East meets West. The war last fall between Armenia and Azerbaijan has shaken the trade part of the equation.

Since these three countries gained independence from the Soviet Union in 1991, Georgia has been the main turnpike for transnational trade traffic in the South Caucasus. On the narrow, mountainous road north, caravans of Armenian cargo trucks appear perennially stuck trying to enter Russia. On the main east-west highway, trucks buzz between Turkey and Azerbaijan. Freight trains chug across Georgia to and from its Black Sea ports.

Zoom out and Georgia is a cog in the increasingly busy traffic extending from China to Europe.

By some estimates, for every million tons of transiting cargo, Georgia receives $5 million in tax revenue. “From 10 to 11 million tons of goods transit through Georgia a year by railway, and from six to seven million tons are transited by road,” said Paata Tsagareishvili, head of the Transport Corridor Research Center, a Tbilisi-based think-tank.

Transportation and storage make up 7 percent of Georgia’s modest $17.5 billion economy. Other sectors, like hospitality and construction, also benefit.

Georgia’s role as a gateway has been defined by politics as much as geography. The early 1990s war over Karabakh sealed the border between Armenia and Azerbaijan. Turkey subsequently closed its border with Armenia. Georgia also has its own breakaway regions, which are difficult or impossible to access from Georgia proper. Goods passing through the South Caucasus need to navigate around these conflicts.

But the South Caucasus may soon see more than one big intersection.

During the 44 days of fighting last fall, Azerbaijan wrested control of much of Nagorno-Karabakh and surrounding lands. The Russia-brokered ceasefire required Armenia to provide Azerbaijan with passage across its territory to the Azerbaijani exclave of Nakhchivan, sandwiched between Armenia, Turkey and Iran. This will connect Azerbaijan with its top ally and key export market, Turkey, which has announced plans to build a rail link. A Turkey-Armenia-Azerbaijan railway link will cost $434 million, according to estimates in Baku.

At a meeting in January, the leaders of Armenia, Azerbaijan and Russia agreed to revive Soviet-era tracks connecting Nakhchivan with the Armenian and Azerbaijani capitals. This could provide Armenia with a railway connection to Russia for the first time since the Soviet collapse.

Armenia’s loss in the war has cast the country into political crisis for now. But in the longer-term, these transportation plans could transform Armenia from an isolated nation effectively blockaded on two sides into the center of transit routes connecting big markets like Turkey, Iran and Russia.

That has been Georgia’s preserve for decades.

Indeed, there are concerns in Tbilisi that these new routes will siphon off some of the valuable cargo transit. “Who needs Georgia anymore?” some Russian media have asked. For its part, Georgia has been conspicuously absent from road and railway negotiations.

“Nothing is constant in this world and sooner or later the near-monopoly our country had in the region had to end,” wrote Tornike Sharashenidze, a political scientist at the Georgian Institute of Public Affairs, in a commentary for Jam-News. He believes, however, that Georgian concerns are exaggerated.

“Mainland Azerbaijan will probably get connected to Nakhchivan fairly soon, but it is unlikely that this line alone can meet the trade and transportation needs of Azerbaijan and Turkey,” Sharashenidze wrote.

A bigger question is the north-south corridor. Setting up customs infrastructure and restoring the defunct segments of the Soviet-era railway from Yerevan to Russia as an alternative to the road across Georgia will take time. Security concerns will also probably dog the plans, and may explain the mixed reactions in Armenia.

“Even in the Soviet times trains going from Armenia through Nakhchivan were pelted with stones and the trains went on with broken windows,” Aram Sargsyan, head of Armenia’s Democratic Party, told Russia’s Moskovsky Komsomolets newspaper. Because of the tormented history of Armenian-Azerbaijani relations, Yerevan takes Baku’s promises of safe passage with a grain of salt, he said.

There are also concerns about Armenia’s ability to negotiate tariffs on shipments across its territory. Stronger powers are making plans on behalf of Armenia, Vahe Davtyan, the director of the Institute for Energy Security, told Sputnik Armenia.

And will Armenian freight-forwarders switch their Russia-bound cargo from the Georgian road to the longer Azerbaijani railway? “The railway will be a 500-kilometer [310-mile] detour,” Tsagareishvili of the Transport Corridor Research Center told Eurasianet.

Wheat, a key Russian export to Armenia, comes from Russia’s Black Sea region. Switching to rail would mean taking a long detour east, around the Caucasus Mountains, heading south to Baku and then circling back across all of Azerbaijan, southern Armenia and Nakhchivan before turning north to Yerevan.

“Nor do I expect key Armenian exports to Russia, such as brandy, to go on such a long expedition, when there is a much shorter alternative through Georgia,” said Tsagareishvili.

Some Georgians say the country should move fast to improve its transit infrastructure and also step up diplomacy with its neighbors to make sure it retains its role as a transit hub. “Unfortunately, transit volumes through Georgia essentially plateaued for the past few years. We need to seek new ways to increase transnational shipments and remain competitive,” Tsagareishvili said. Former Defense Minister Tina Khidasheli told Netgazeti that “Georgia needs to work actively with Turkey and Azerbaijan” to maintain its role as transit hub.

Optimists say that more trade will reduce conflict in general: Even if Georgia loses some revenue, ultimately everyone will benefit from the stability that new transport networks could bring. “Putting the moral arguments aside, even from pragmatic point of view Georgia will also win in the long-term if Baku and Yerevan manage to normalize their relations to at least some degree,” Sharashenidze wrote.