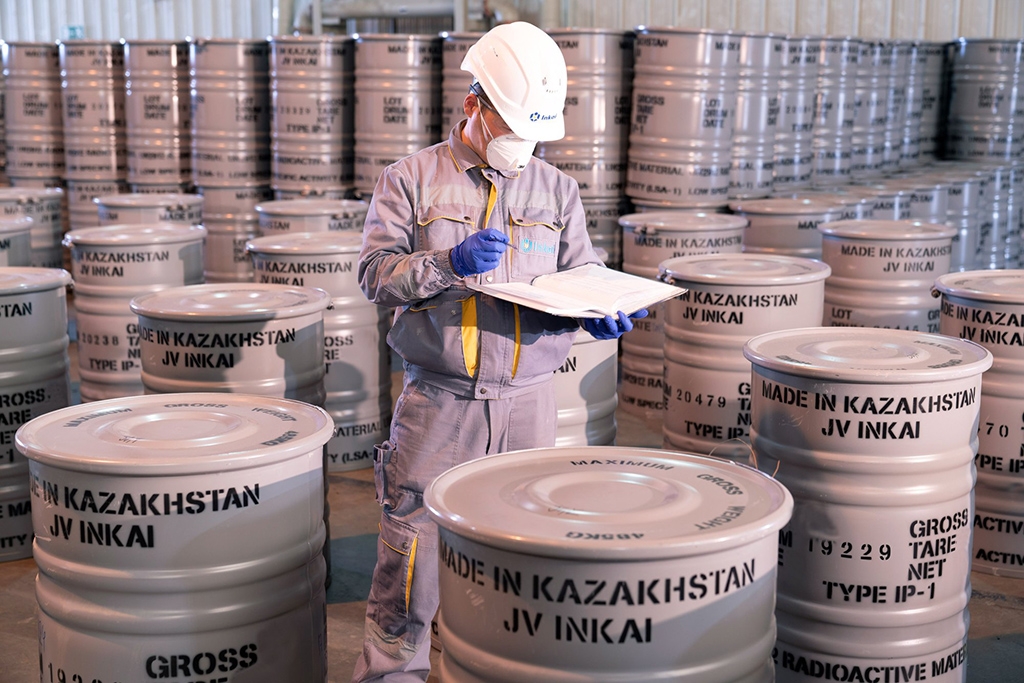 Kazakhstan is the world’s largest exporter of uranium. Turning the element into power at home may be hard to resist. (Kazatomprom)

Nuclear power has critics everywhere, but in few places is it as controversial as Kazakhstan, where the Soviet nuclear weapons program left a legacy of contamination and illness.

Since 1999, when the country’s only nuclear power plant, in Aktau, was closed, the government has occasionally discussed building a new one. Officials raise the subject every few years, opinion leaders voice suspicion, and then the topic fades away. Now the president has thrown his weight behind the idea, saying nuclear is imperative to meet Kazakhstan’s energy needs, which are overwhelmingly served by burning dirty coal.

Activists are alarmed, proponents smell a chance to clean up the energy mix, and political analysts see the hand of Russia.

“I myself believe that it’s time to substantially consider this issue, since Kazakhstan needs a nuclear power plant,” President Kassym-Jomart Tokayev told a Russian business forum earlier this month.

Tokayev has previously tried to address concerns. Nuclear “phobias are inappropriate,” he said in May. “We will not rush to build nuclear power plants, but we should not be late with this matter, as we might face an energy deficit by 2030,” he said in May. Two years ago, Tokayev also said the issue might go before a nationwide referendum; that idea has not been mentioned since.

Cheap, clean power may be hard to resist. Kazakhstan is already unlikely to meet its commitments to reduce greenhouse gas emissions made as part of the 2016 Paris Agreement on climate change. And the country is the world’s largest uranium producer, contributing about 41 percent of the global supply last year. All of this is exported, mostly to China, Canada and Russia.

With its abundant uranium, Kazakhstan is in a prime position to produce cheap nuclear power, says Marat Shibutov, a political scientist who sits on a public board advising the president. Writing on his Telegram channel recently, Shibutov called for five nuclear plants with four reactors each to meet all of Kazakhstan’s energy needs, end the use of dirty fuels and hydropower, and sell carbon credits on international markets.

The most obvious contractor would be Rosatom, the Russian state nuclear power company, which is already a longstanding partner. Rosatom holds shares in six joint ventures with Kazatomprom, Kazakhstan’s state-controlled nuclear conglomerate. And it is one of the world’s largest exporters of nuclear power technology. In recent years Rosatom has worked on projects from Belarus to Bolivia. In 2018, Uzbekistan agreed to hire the company to build a nuclear plant in the Jizzakh region with an $11 billion loan from Moscow.

There is little information about where a new Kazakh plant might be built, but in 2019, after Russian President Vladimir Putin offered Russian technical support, the deputy energy minister said Ulken, a village near Lake Balkhash, would make an ideal location.

“Ulken might be optimal … because [a nuclear power plant] needs water for cooling, but it is located on a tectonic fault, which makes it highly undesirable to build it there. If an accident occurs in the plant, we may lose Balkhash with its entire ecosystem,” Boreiko wrote in Facebook.

For Kazakhstan, the bigger danger is Russia’s embrace, says Dosym Satpayev, director of the Risk Assessment Group in Almaty.

The idea, he added, is “raw and smells bad.”

Margarita Kalinina-Pohl, a research fellow at the Middlebury Institute for International Studies at Monterey, has argued that Russia uses nuclear plants as "geopolitical assets" to strengthen bilateral ties because the relationship between supplier and buyer lasts 30 to 40 years.

“Russia has political motives for building nuclear power plants, especially in Central Asian countries. After the annexation of Crimea in 2014, Russia was politically isolated from the Western world. In response, it began to increase its influence in post-Soviet states, namely, in Central Asia,” Kalinina-Pohl said in a 2020 interview.