Of Saakashvili, His Son and Khinkali 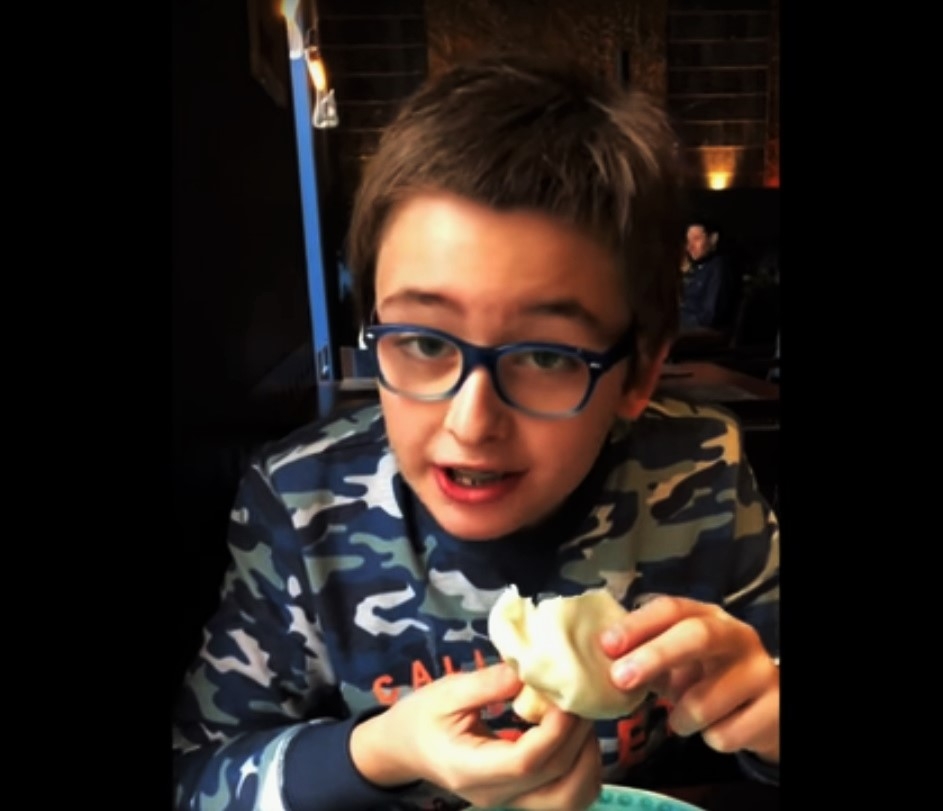 Screenshot of a YouTube video in which 12-year-old Nikoloz Saakashvili demonstrates the proper way to eat Georgia's national treasure, the khinkali.

Khinkali and Mikheil Saakashvili are among Georgia's best known brands. Combine the two and you get an instant online hit, as was the case with a video filmed by the former Georgian president featuring the iconic, but tricky-to-eat, dumplings.

The video demonstrates to the world the proper way of eating the messiest of Georgian dishes and stars the ex-president’s younger son, 12-year-old Nikoloz Saakashvili .

Young Saakashvili explains what Georgians are wont to tell the uninitiated who approach the dumplings without proper prepping or even, blasphemously, with a fork. “Take a khinkali, turn it upside down,” the boy, who somewhat resembles Harry Potter, says in impeccable American English, holding one fine specimen of the dumplings. “Take a bite and then suck all the juice in it.”

The kid speaks the truth. You ignore the protocol, rush into it and you make a mess, though some would argue that is exactly what his dad does for a living.

The khinkali tutorial in fact came as a cutaway gag just after Saakashvili, the world's only stateless former head of state, was recently sentenced to a prison term in Georgia and as he fights ongoing attempts to place him under house arrest in Ukraine.

And Nokoloz is close at hand to witness it all.

Whether for PR or parental reasons, Saakashvili keeps Nikoloz by his side throughout his adventures and misadventures. Going by his Georgian nickname Nikusha, Nikoloz was on hand for the Ukrainian government’s futile attempts to expel or arrest his father (also known by a nickname, Misha), who is now leading the opposition to his former ally, Ukrainian President Petro Poroshenko.

Last September, Misha took Nikusha along to the Polish-Ukrainian border as Saakashvili attempted to return to Ukraine after being denaturalized and effectively banished from the country. “I’m going to cross the border with my 11-year-old son. I’m confident that there will be no incidents,” Saakashvili said, before posting on Facebook a photo of himself and Nikusha astride bicycles.

But there was an incident. Misha and his fans ended up breaking through a cordon of border guards, while Nikusha and his mother, Sandra Roelofs, quietly went through border control.

Then in November, Nikusha himself was briefly detained in Kyiv’s Boryspil International Airport when his Tbilisi-supplied bodyguard was denied entry. Nikusha was kept in the airport as an unaccompanied minor until an angry Saakashvili came to pick him up.

The young Saakashvili’s education continued, however.

On January 3, after a series of detentions and releases, Saakashvili brought his son to one of his court hearings in Kyiv. “I agreed to have my son come here, because it is a very interesting precedent to go into history,” he explained to reporters. “I wanted him to remember what the sovok [a pejorative for Soviet-style bureaucracy and mentality] looked like.”

It is anyone’s guess if being caught up in his father’s many battles is a source of stress or adventure for Nikusha. Saakashvili’s own motivation for bringing his son along on his bumpy rides also is open to interpretation. He could be, as he asserts, giving Nikusha a real-time history lesson or coaching him in the business of revolutions or just channelling the image of a doting father.

If the latter is the case, the khinkali master class may have helped Saakashvili earn the family man points. Many were indeed charmed by the video that has been shared across news and social media Ukraine and Georgia.

It also offered a glimpse into what the Saakashvili kids have been up to while daddy and mommy did politics. Nikusha turned out to be maintaining a curious Youtube channel. In one earlier recording, the youngest Saakashvili, depicts “5 Types of Big Brothers” with his older brother Eduard playing the older brother and his mother making a cameo as a waitress.

In another, Nikusha quizzes Misha about his experience breaking through the Ukrainian border. Saakashvili responds to his son just as he’d respond to any journalist: it was not about him, it was about freedom and democracy and so on.

If Nikusha grows up to pursue a career in filmmaking, his father could conceivably provide plenty of good material. Saakashvili now has two countries after him and Nikusha can witness more major turns in the saga.

The latest major development was court in Georgia sentencing Saakashvili in absentia to three years in prison for allegedly aiding and abetting a murder case that haunted part of his tenure as president. Charges of plotting to overthrow Poroshenko are pending in Ukraine and prosecutors there are trying to place him under pre-trial house arrest. Saakashili denies all charges as reprisal by his oligarchic foes in the respective countries.

The next twist could be a Ukrainian attempt to hand Saakashvili over to Georgia, though his lawyers insist that the law bars extraditing a recent Ukraine citizen. Also, for all their Misha-bashing, it is not clear if the Georgia government would even want him back. His imprisonment would likely spark fresh international accusations of a political vendetta.

Saakashvili himself is positive that there will be a happy ending, where he brings an end to the oligarchy in Ukraine and ushers in a new, reformist government.

Whichever is the case, Nikusha should keep his camera rolling.