With a park, garbage trucks, and now a waste-processing facility, watchdog groups are questioning the city government’s many gifts from politically connected businessmen. 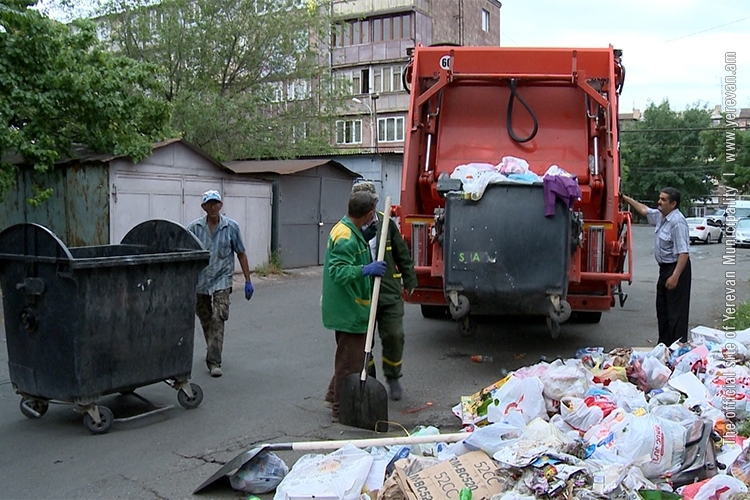 The dirty business of picking up Yerevan's trash. (photo: yerevan.am)

News that the city government of Yerevan has accepted a gift from an oligarch under criminal investigation has raised concerns about what appears to have become a standard practice.

The city government announced on December 13 that it had accepted a donation of a waste-processing facility from Teryan 5, a company connected to Gagik Khachatryan, a former senior government official who was so powerful in Armenia’s old regime he was known as a ”super minister.” Khachatryan was arrested in August on charges of embezzlement and abuse of power.

Teryan 5 will thoroughly renovate the 8,800-square-meter facility at its own expense. The sole shareholder of the company is Harutyun Tadevosyan, who is a proxy owner of several of Khachatryan’s businesses.

The municipality made its announcement after rumors spread that Teryan 5 was going to donate 20 trucks, and the investigative news outlet Hetq made a Freedom of Information Act request regarding the company’s donations to the city. The trucks were never donated, but the waste processing facility appears to be a much more valuable gift. The municipality tried to get out ahead of Hetq’s report by publishing the information itself and not providing it to Hetq, a violation of Armenia’s FOIA law.

Yerevan’s mayor is a close ally of Prime Minister Nikol Pashinyan, who has made a priority of rooting out corruption in the country. But it was not the first time Yerevan’s city government had taken a gift from a potentially dubious source.

In May, the municipality accepted the gift of a park from another two prominent businessmen, Mikayel and Karen Vardanyan.

And a month before the Khachatryan news broke, it had emerged that a company tied to Samvel Aleksanyan, another oligarch and ex-member of parliament from the former ruling Republican Party of Armenia, had donated three garbage trucks to the municipality.

Despite the obvious connections – even the name of the company suggests a tie to Aleksanyan – city officials first denied that they were taking anything from Aleksanyan.

At a November 28 press conference, municipality spokesman Hakob Karapetyan insisted that Aleksanyan had not donated anything. “Samvel Aleksanyan didn't donate,” Karapetyan told reporters. “The companies connected to Samvel Aleksanyan, which the public is aware of, have not donated. If Mr. Aleksanyan decides to give something in the future, I think the city will not reject it.”

In a December 3 interview with Public TV, Yerevan Mayor Hayk Marutyan also denied the connection to Aleksanyan: “The only shareholder [of Alex and Holding] is a person who is not Samvel Aleksanyan and as mayor, I have no right to say that Samvel Aleksanyan donated it because officially it’s not his company.”

Pashinyan was asked about the issue during a session of parliament on December 9, and dodged the question. “Is there any concern that there is corruption?” he asked, and proceeded to point to other ways in which Aleksanyan’s businesses have suffered, including a café he owned that was razed as part of a campaign to clean Yerevan’s center of its many legally dubious enterprises. Pashinyan said he had made inquiries about Aleksanyan’s other dealings with the city and that he had found that the municipality had taken back a kindergarten that had been given, under the previous government, to a charity run by Aleksanyan; it was in fact a different body of local government that had taken it back.

The local branch of the corruption watchdog Transparency International criticized the Alex and Holding deal. “I’m not a child, to believe that those companies give gifts because they have a big love for Yerevan,” said the head of TI Armenia, Varuzhan Hoktanyan, in an interview with local news site factor.am. “I don’t share the opinion expressed by the press secretary of  the municipality that real owners do not matter. Real owners matter a great deal. Their other companies could get privileges.”

In fact, on December 12 the government granted a tax break to a company owned by Aleksanyan’s daughter.

“Even TI says there is a risk of corruption,” said Edmon Marukyan, the head of the opposition Bright Armenia faction in parliament, in an interview with RFE/RL. “It is obvious that the Municipality of Yerevan has a deep problem with this issue. It would be much better for them to say very quietly ‘Yes, it happened, we didn't think it was a problem, but if we had to do it in the future we would discuss it in a city council meeting.’”

The newspaper Hraparak reported that one of its journalists ran into Aleksanyan at a shopping mall and asked him about the gifts. “People were criticizing the mayor for not solving the garbage problem. Isn’t it good now that they are helping to solve it?” he replied, adding that the controversy around the donations meant that “no one wants to do anything now. I just wish my business was a little better, I could buy some buses and donate them to the city.”