The protesters used props and imagery to depict the devastations of the 2008 war and its continued impact on Georgia. 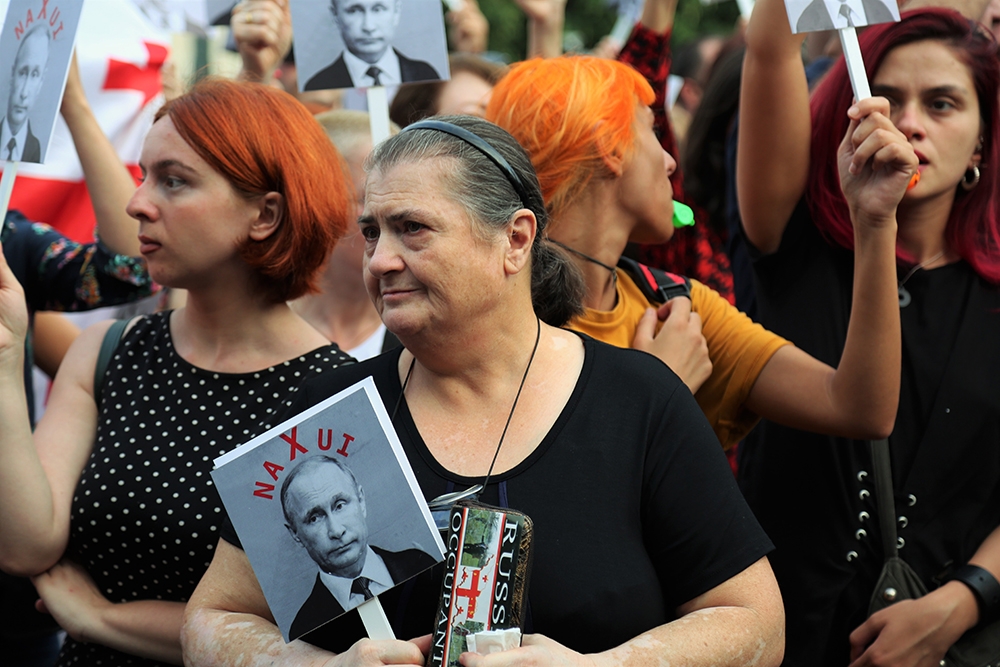 Protesters held posters with photos of Georgia’s main antagonist in the war, Russian President Vladimir Putin, along with a caption that translates, roughly, “go f--- yourself.” (Photos by Giorgi Lomsadze)

A rowdy rally was held in front of the former Russian embassy in Tbilisi on August 7 to commemorate the 10th anniversary of the Russia-Georgia war. Protesters held posters with photos of Georgia’s main antagonist, Russian President Vladimir Putin, along with a Russian caption that translates, roughly, “go f--- yourself.”

Photos of Georgian soldiers who died in the war also were on display at the rally. The photos featured the soldiers' names followed by the words, in Georgian and English: “Imagine there were no Putin – I’d be alive.”

Protesting under the banner “Time will not cure occupation,” organizers condemned the 2008 Russian invasion of Georgia, the expulsion of ethnic Georgians from the breakaway territory of South Ossetia, and the continued Russian backing of the de facto governments in South Ossetia and another separatist region, Abkhazia.

The protesters used various props and imagery to depict the devastations of the 2008 war and its continued impact on Georgia. A barbed wire fence was placed on a curb in front of the embassy building, symbolizing the fences that the Russian military is erecting around Abkhazia and South Ossetia, physically carving the two protectorates out of Georgia.

“We want to tell the world […] that we will never put up with [Russian] occupation [of Georgian territories], and the war is hurting us now just as it hurt 10 years ago,” Tamar Arveladze, one of the organizers of the rally, told reporters.

Georgia’s Western allies issued statements of support. “Ten years of occupation is 10 years too long,” the U.S. Embassy in Tbilisi said in an August 7 statement. “We will continue to work together with the government and the people of Georgia and with our friends and allies to ensure the world’s continued support for Georgia’s sovereignty and territorial integrity within its internationally recognized borders. Georgia, we are with you.”

Georgian officials visited the graves of fallen soldiers, and major Georgian television channels ran stories reconstructing the beginning of the war. The chronology of events is still disputed within Georgia (and abroad), but Georgians by and large agree that in 2008 Russia unlawfully and in a premeditated way invaded foreign territory, dismembered a sovereign nation, and to this day continues to move the nation’s de-facto borders at its will.

The Russian military continues to push the borders of South Ossetia and Abkhazia deeper into Georgian territory, in what has become known in Georgia as the “creeping occupation" and is carefully documented by European Union observers.

In Russia, by contrast, the date 08.08.08 was remembered as the day Russia came to the aid of breakaway South Ossetia. Television networks aired stories that fit the Russian narrative – the Russian army saving the people of South Ossetia from attack by Georgian troops. These stories, too, featured accounts from government officials, soldiers and survivors. Victims were also commemorated in the de facto South Ossetian capital, Tskhinvali.

The European Union’s investigation of the war accused all sides of attacks on civilians.