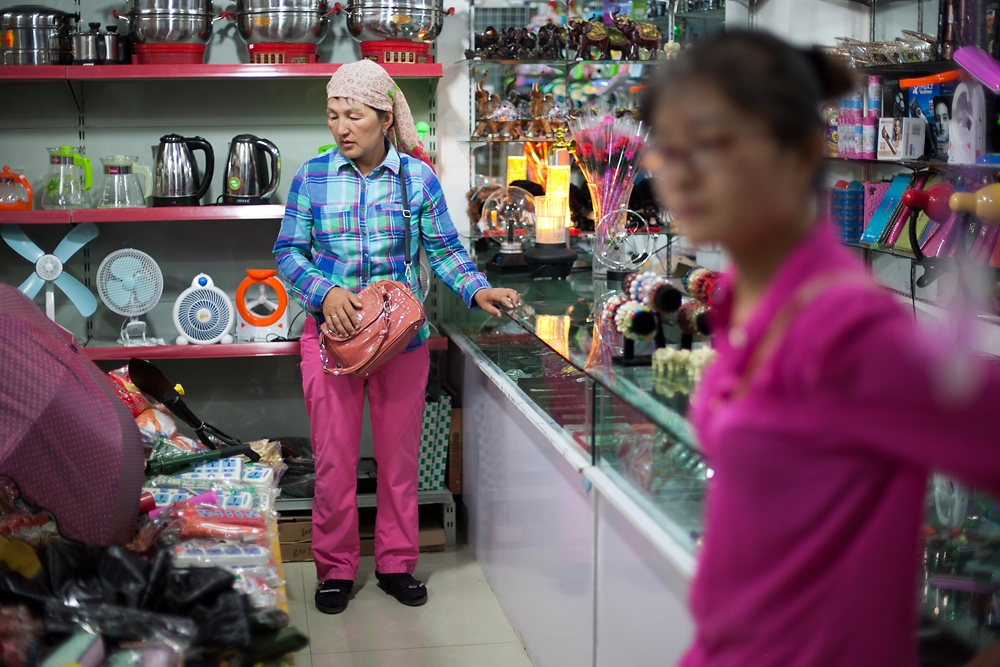 A Kazakhstani woman shops inside the Chinese mall in the Khorgos International Center for Boundary Cooperation. 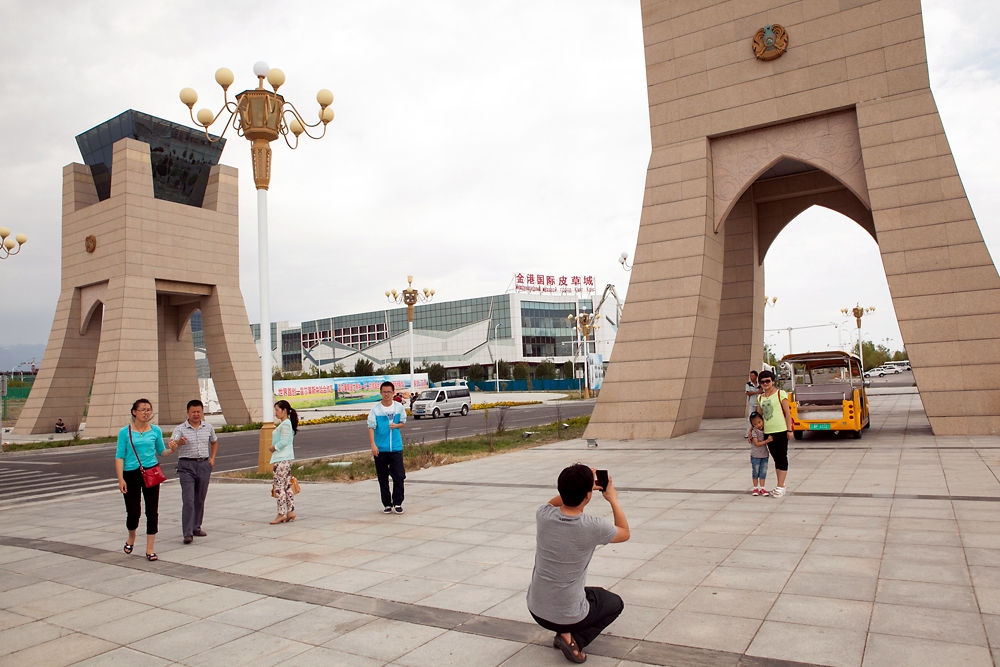 The location of the official border is marked by two pagodas with China in the background. 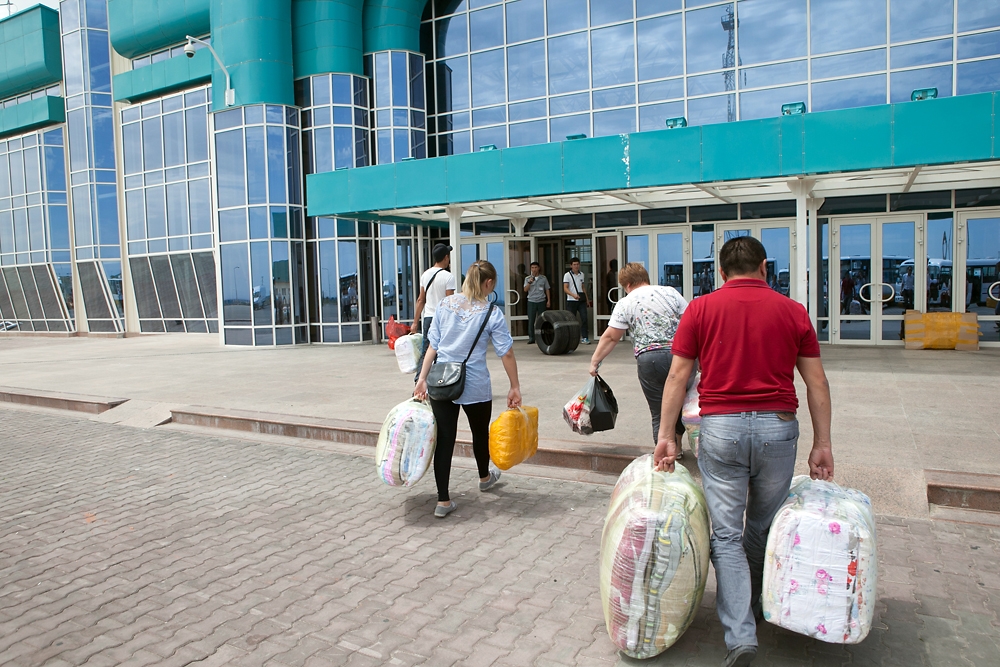 Returning to Kazakhstan with their purchases, Kazakhstanis enter a large new customs facility. 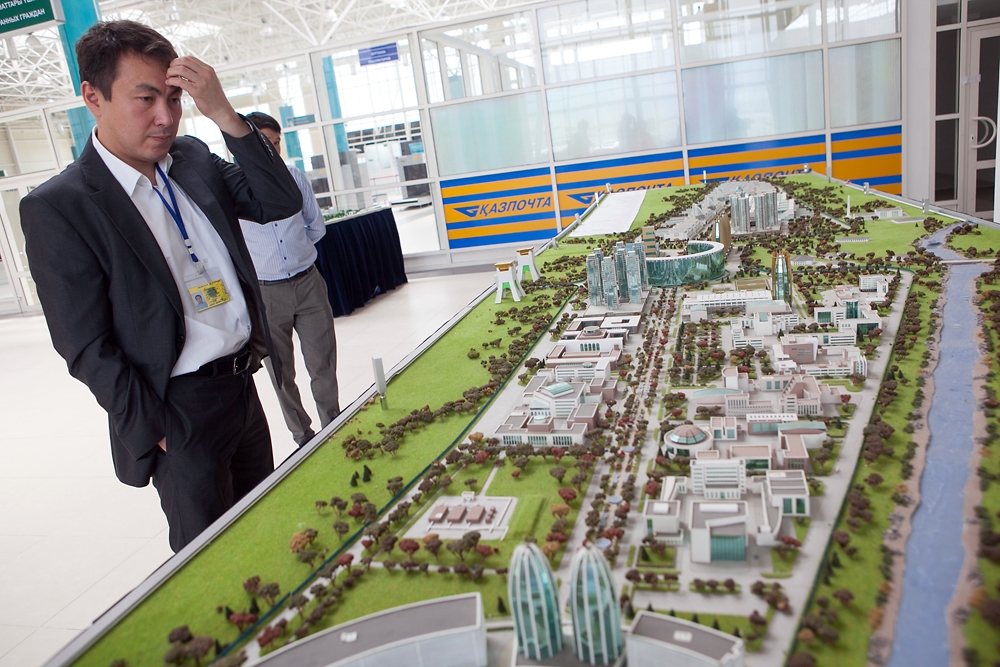 Khorgos ICBC Vice President Sakengali Nurtazin looks at the unrealized plan for the Kazakhstani side of the free-trade zone. 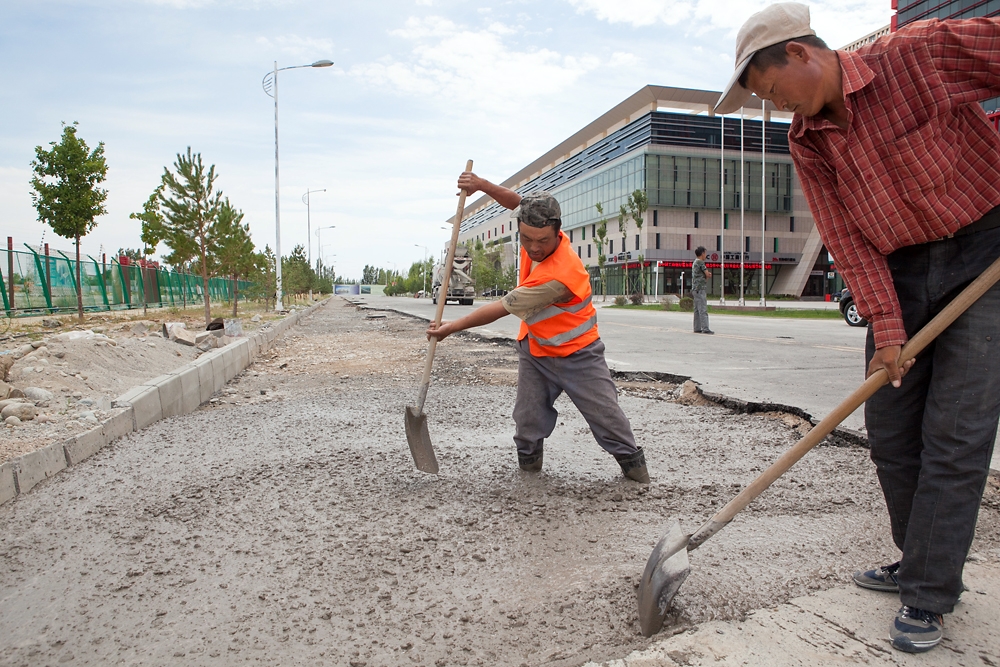 Work continues on the Chinese side of the free-trade zone. 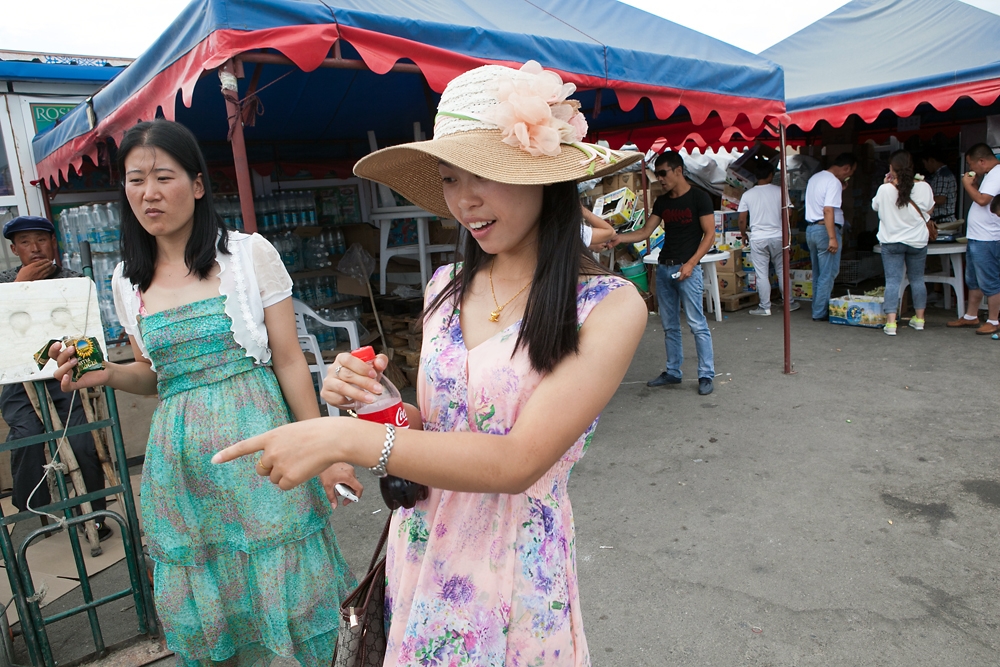 Chinese tourists shop for items from stalls on the Kazakhstani side. 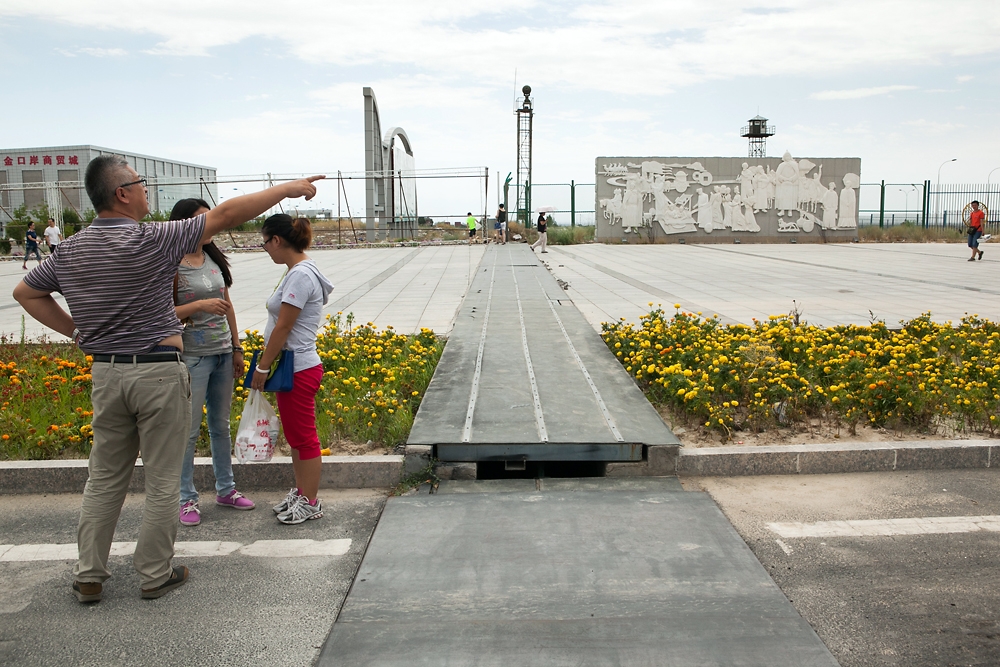 Both countries have constructed a section of retractable fence that can block the sidewalk and road if needed. 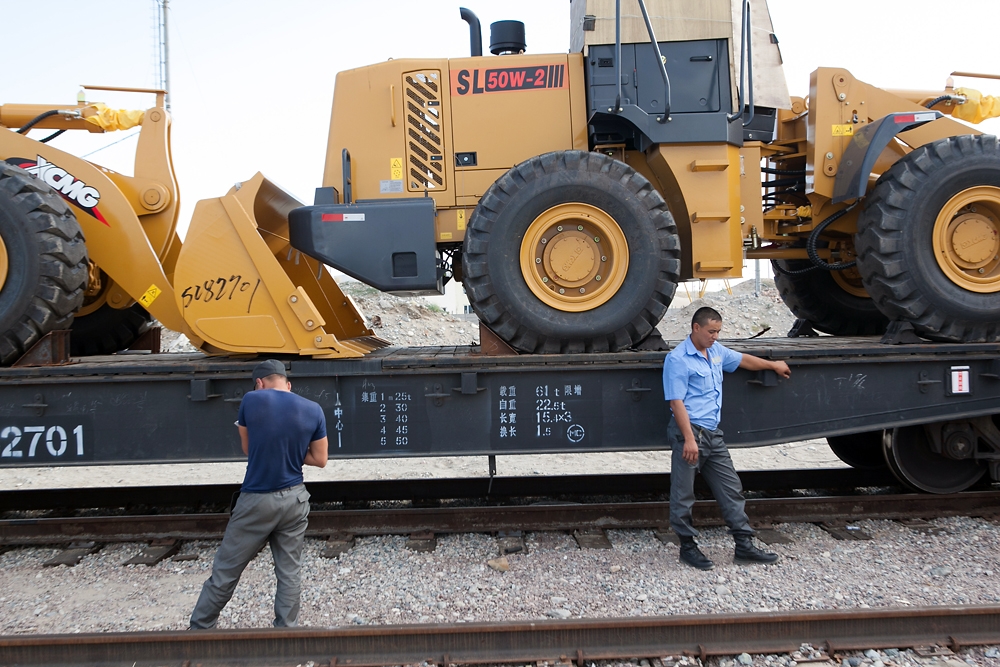 Guards take inventory of goods crossing by train from China into the Special Economic Zone, which is adjacent to the ICBC. 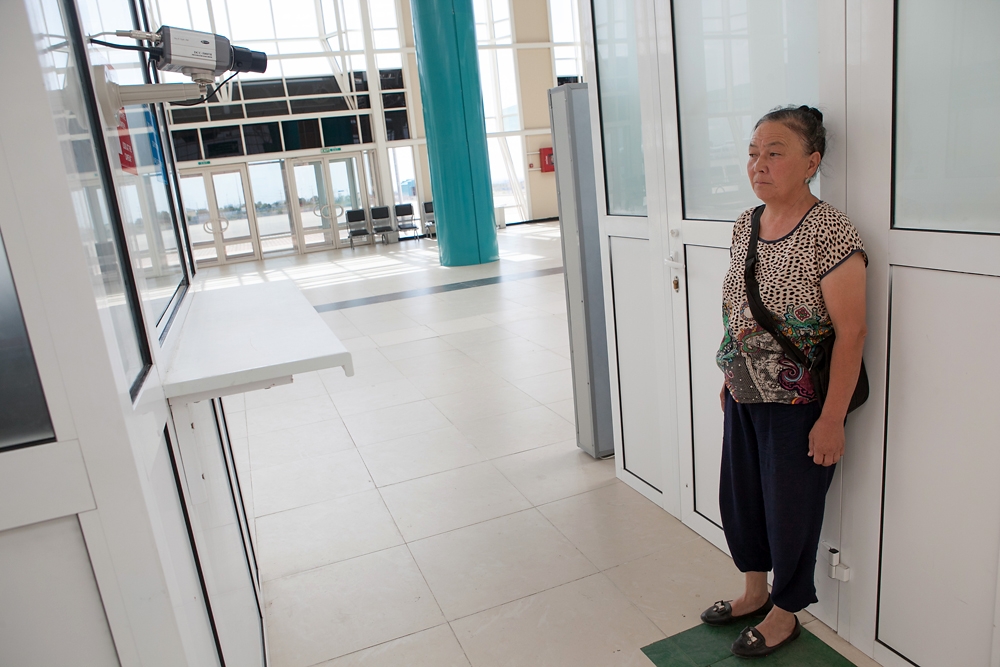 A Kazakhstani woman passes through customs on her way into the ICBC. 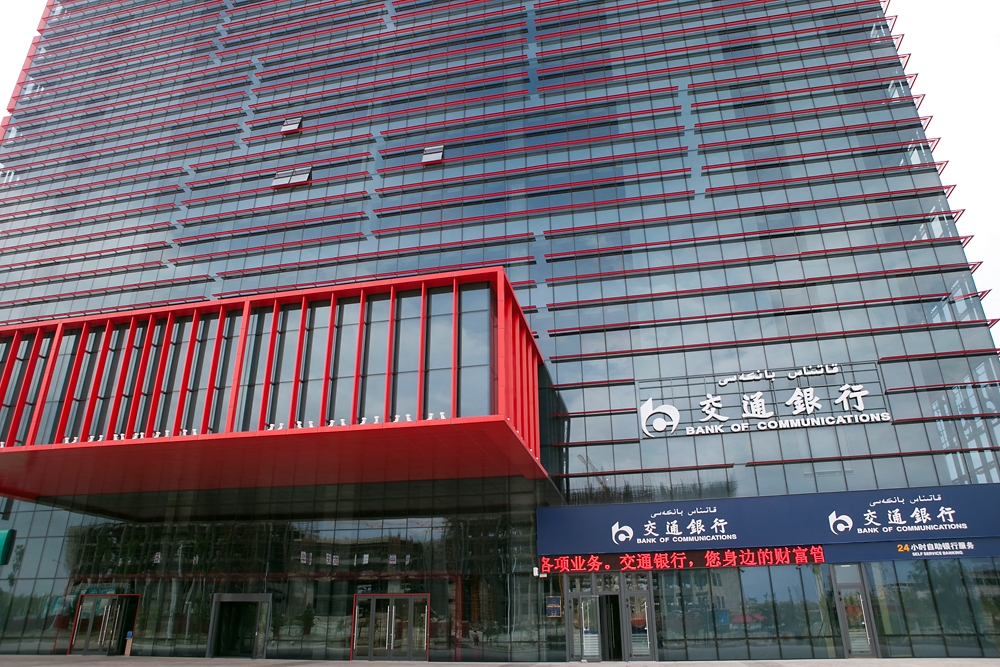 Chinese buildings, including this bank, dwarf anything built on the Kazakhstani side. 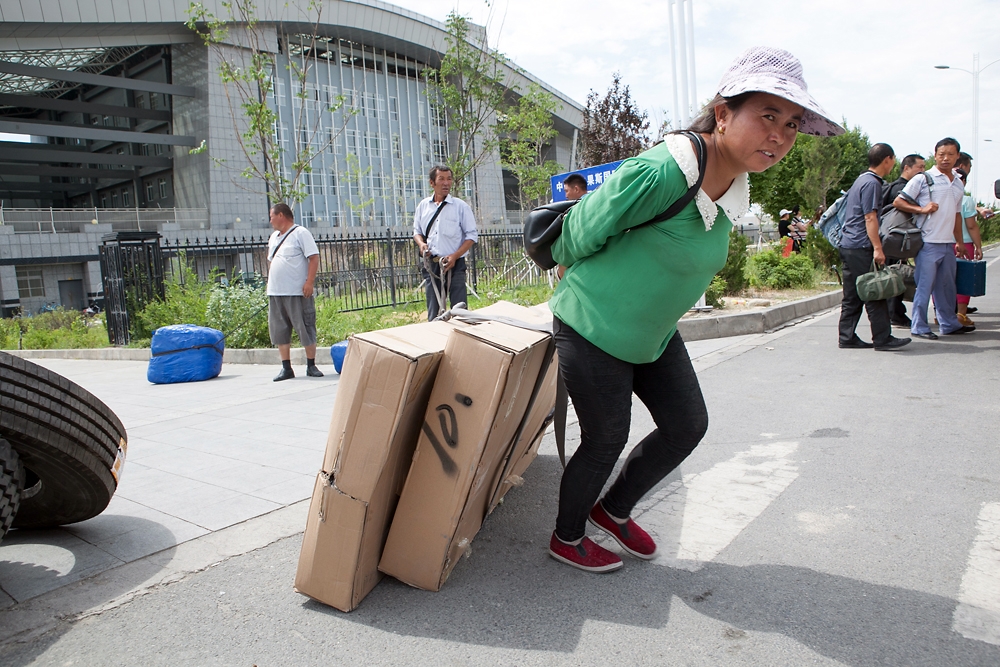 Chinese traders drag goods into the zone through the Chinese customs post. 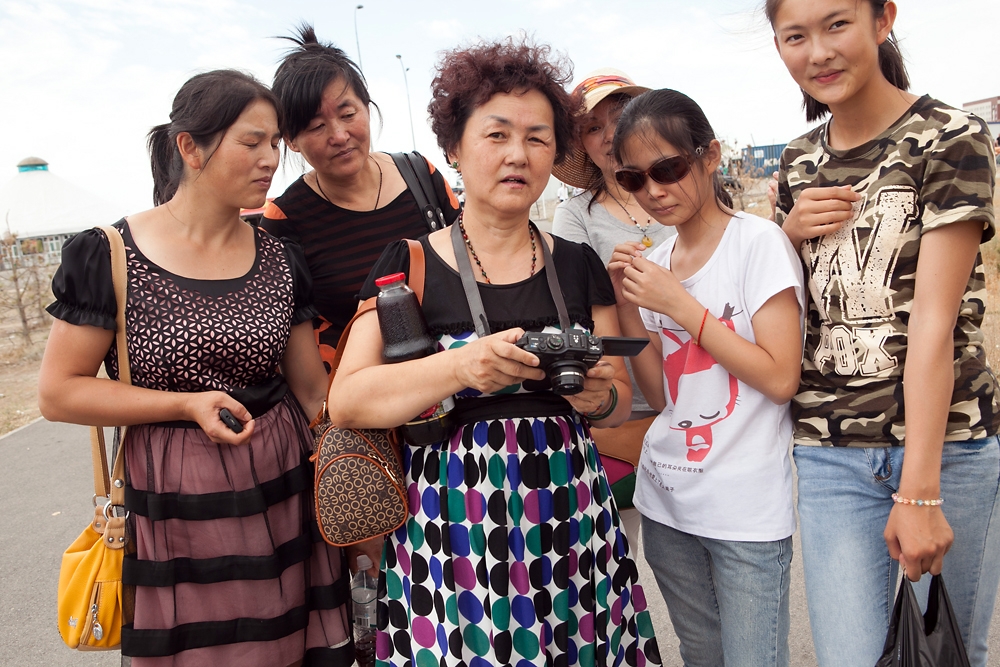 Chinese tourists stop to take photos on the Kazakhstani side of the ICBC. 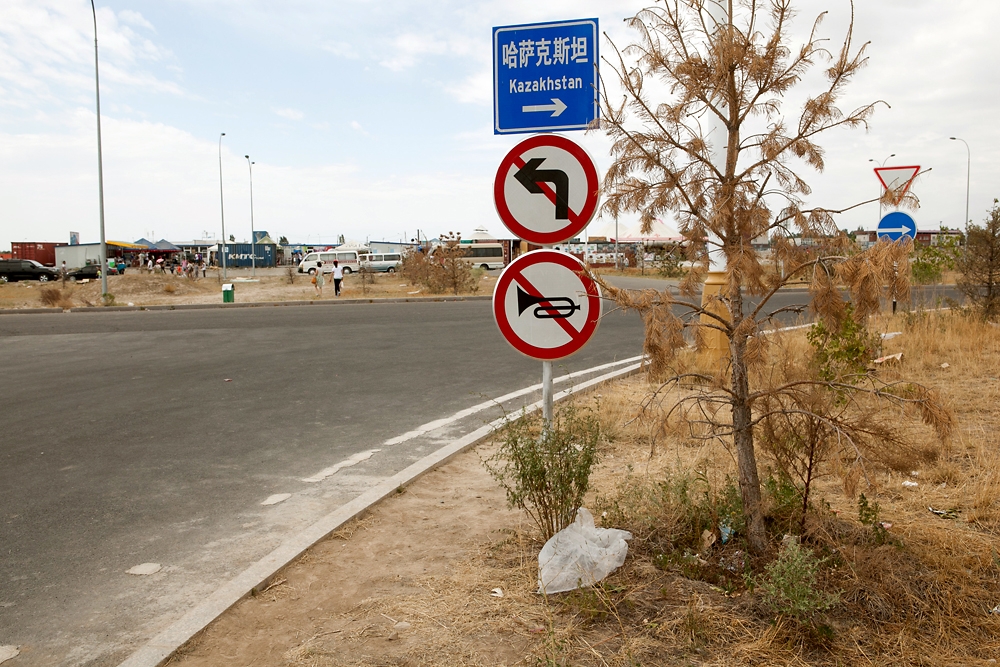 The Kazakhstani side of the ICBC has little to offer compared with the Chinese side. 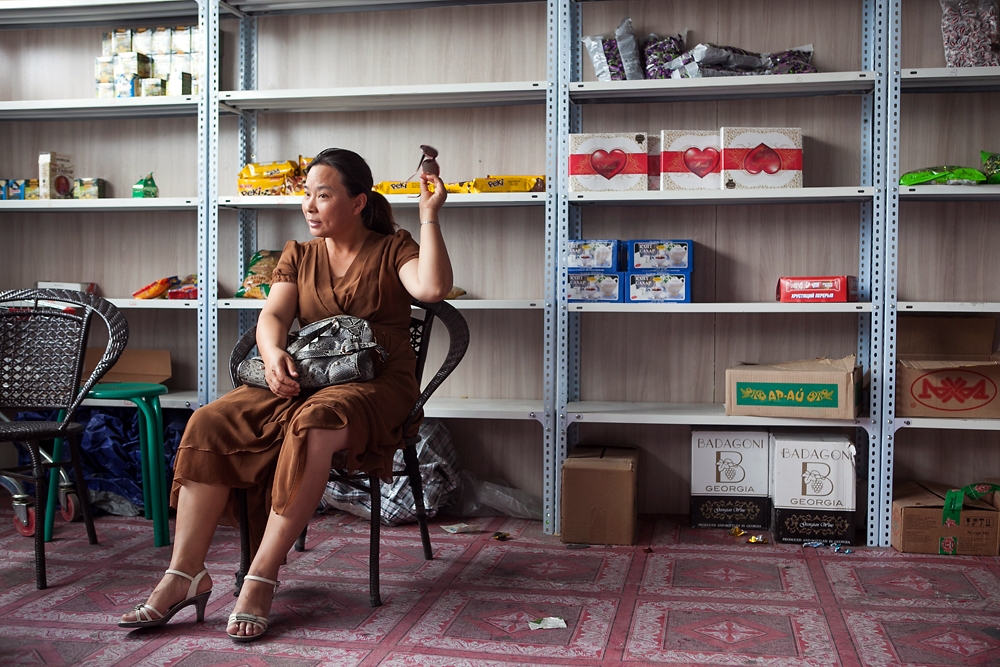 A Chinese woman sits in a shop on the Kazakhstani side that sells a little candy and Georgian wine.
prev
next

On the Chinese side of the border, a four-story shopping mall offers Kazakhstani shoppers a stunning variety of duty-free goods—from iPhones to auto parts and children's clothes. Visitors can stay in a well-appointed hotel and enjoy solicitous service at a number of Chinese banks. It's a far different story on the Kazakhstani side of the free-trade zone, which both countries hail as indicative of burgeoning cooperation: Chinese tourists can buy some candy inside a metal shipping container. And that's about it.

The 528-hectare Khorgos International Center for Boundary Cooperation (ICBC) officially opened on a windswept patch of the Chinese-Kazakh border in December 2011. It was designed as a visa-free zone where citizens of the two countries could trade and enjoy local entertainment. But apart from some giant Kazakhstani customs facilities, and many miles of fencing, it appears that Beijing took the project a lot more seriously than Astana.

"The Chinese are ahead of us because their government has closer ties to their businesses," said Khorgos ICBC Vice President Sakengali Nurtazin.

Kazakhstani officials admit the original scheme, which included plans for 20 hotels, was not carefully considered. "Maybe the study was not conducted correctly. We have come to the conclusion we don't need so many hotels," said Nurtazin.

Nurtazin describes modified plans including casinos, outlet shops, a spa, a "Disneyland-style" theme park and a university specializing in languages. For all this he hopes to attract $2 billion in private financing. Astana has spent $300 million so far, he said, adding that China is spending $4 billion on its side.

Part of the problem for the Kazakhstani side may be its remote location. On the Chinese side of the border sits a city of about 100,000 inhabitants; a larger city, Yining, is only a one-hour drive away. By contrast, the Kazakhstani sector is surrounded by desolate scrubland. Almaty is a bumpy five-hour drive, though officials promise a new road.

Corruption may have played its part in the delays, too. In 2011, Kazakhstani financial police arrested the head of customs at the nearby border crossing, accusing him of being part of a $130-million smuggling ring, and sacked the country's customs chief. That followed the founding of a free-trade organization comprising Kazakhstan, Russia and Belarus—the Customs Union. Russia has expressed concern about the troubling reports of corruption at this remote Customs Union outpost, at one point reportedly trying to install a Russian border agent at Khorgos.

Soon after, responsibility for the ICBC passed to the state railway company, Kazakhstan Temir Zholy (KTZh), which is now trying to salvage the project. "The concept needs to be changed. We cannot compete with the Chinese. It's impossible," said KTZh Vice President Kanat Alpysbayev. "For example, we would like to open a casino because the Chinese like gambling."

After taking over, KTZh executives separated the ICBC project from a 5,700-hectare Special Economic Zone (SEZ). Over the next two years, Nurtazin said the government will spend over $400 million on the $1.1 billion SEZ. Already, within the SEZ, a hub for goods passing from China to Europe quietly hums with activity; a trainload transits here every day on the 15-day journey from central China to Germany. The SEZ will also include a logistics center and factories where "Made in Kazakhstan" products can be assembled, presumably with Chinese parts.

Moscow is not looking favorably on all this industry on the edge of its Customs Union, belives Dominic Lewenz of Visor Capital, a brokerage in Almaty. "A plan to develop a manufacturing center on the Kazakh side of the border faces scrutiny from Russia, in case it becomes seen as a vehicle for Chinese imports, with only final assembly inside the Customs Union," Lewenz said.

The Customs Union – which is slated to evolve into the Eurasian Economic Union in January – looks like a silent spoiler for the Khorgos project. Currently, ICBC visitors are permitted to export up to 50 kilos or 1500 euros of duty-free goods one time per month. Nurtazin, the Khorgos vice president, would like to make those weekly limits. "But to do this we must negotiate with the two other Customs Union members [Russia and Belarus], not only our government. Of course [Russia and Belarus are] not happy about it," Nurtazin told EurasiaNet.org. "The idea died at the initial stage."

"We're doing everything we can to get [Khorgos] out of the Customs Union," he added, admitting that is unlikely to happen.

While Khorgos's beginnings may be more modest than officials had hoped, Kazakhstani shoppers appear pleased. Currently about 1,500 individuals visit every day (the customs facilities are designed to accommodate 30,000).

Batagoz Ramazanova, 56, who runs a linen shop in the northern town of Pavlodar, first visited earlier this year. She now returns every six weeks, making the five-day round trip by train with two friends to bring bundles of bedding back to her shop. "The service here is really good. If you don't violate the law, no one bothers you. Plus the goods are cheaper here," Ramazanova said. "It takes a long time to get here, but it's worth it."

Another shopper, Akyerke Myrzataeva, 29, said she comes every few months from Zharkent, a town of some 30,000 about half an hour away, to buy household items. "Goods here are cheaper," she said, "sometimes two or three times cheaper than in markets in Zharkent and Almaty."

Within the free-trade zone, a sweeping pair of monuments that each look a little like the Chinese character for friendship mark the official frontier. Underfoot, as Kazakhstani shoppers scurry over carrying boxy shopping bags of woven plastic fiber, and Chinese tourists pose for photographs, the barbed-wire fence has not entirely disappeared. Two sections of parallel fencing stand waiting underground, under a removable rubber seal. They are ready to pop up, just in case.

Kazakhstan and China may be eager to cooperate, but not to cede an inch of sovereignty.