On emotional anniversaries in the Caucasus, tentative signs of softening

This week’s commemorations of tragedies around the Armenia-Azerbaijan war tested the two sides’ promise to prepare their populations for peace. 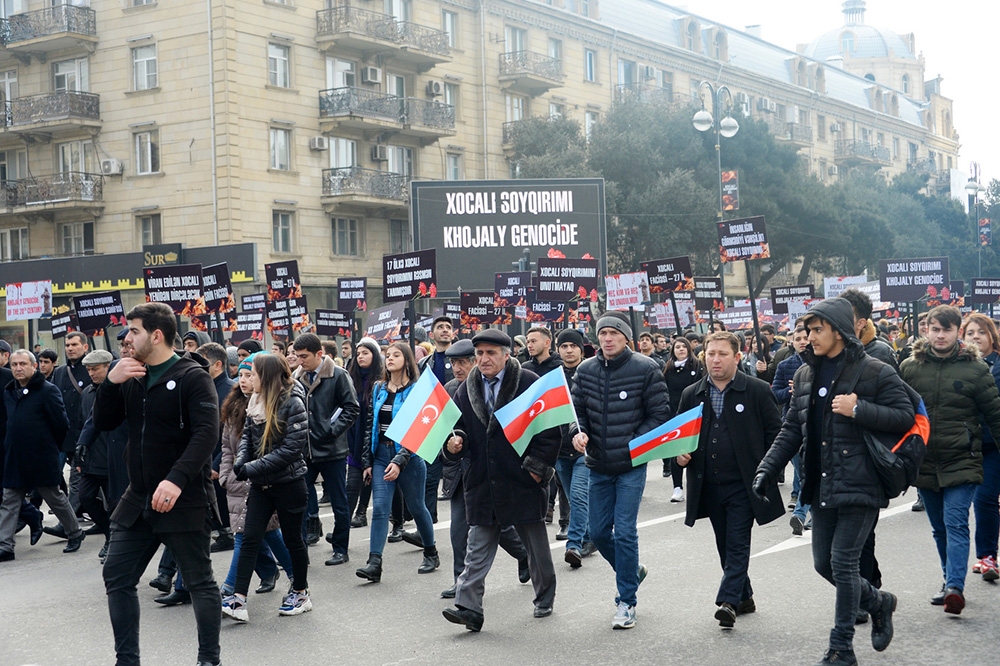 The end of February is a fraught time for peacemakers in the Caucasus.

On February 26, 1988, anti-Armenian pogroms began in the Azerbaijani city of Sumgait, one of the precipitating events of the bloody war that followed between the two sides. The same day four years later saw the greatest single massacre of that war, when Armenian forces killed several hundred Azerbaijanis in the town of Khojaly. As the conflict between the two sides continues to fester, those twin anniversaries have been an occasion for both Armenians and Azerbaijanis to vilify the other side in the course of remembering their own tragedies.

But as Armenia and Azerbaijan are making new efforts toward a diplomatic resolution, there are signs that the temperature around the emotive anniversaries has cooled, if only slightly.

When Azerbaijan President Ilham Aliyev gave an interview to Russian television network Rossiya-24 about Khojaly on the 2018 anniversary, he blamed Armenians in harsh terms. “This was a manifestation of Armenian fascism,” he told the interviewer then. “This was a manifestation of barbarism.” But when he gave an interview on the same occasion to the same correspondent this year (his only public remarks on the event) he didn’t mention Armenians at all.

It was a small step, but one that heartened peace advocates. “This, coming from the president, is a strong, positive thing, compared to last year’s speech,” said a Western diplomat in Yerevan, speaking to Eurasianet on condition of anonymity.

Likewise, on the anniversary of Khojaly last year, Armenia’s then-foreign minister Eduard Nalbandian suggested that the massacres had in fact been carried out by Azerbaijanis themselves. This year, however, the Armenian government stayed silent on the issue.

“Television and textbooks are still full of militarism, but we don’t have orders from above to produce hate speech as [we had] for the previous 20 years,” Yuri Manvelyan, a journalist for the news site epress.am, told Eurasianet.

The change of government last year in Armenia has revived a diplomatic process that had been moribund. Most notably, after the foreign ministers of Armenia and Azerbaijan met in January, they issued a statement agreeing on the need to “prepare the populations for peace.” Part of that process, another Western diplomat familiar with the negotiations told Eurasianet, is the need to “diminish rhetoric” that has hardened attitudes against a compromise on both sides.

There has been some evidence that this has been happening. Armenian public television aired an unprecedented report recalling the times when Armenians and Azerbaijanis lived together peacefully. An independent Azerbaijani journalist visited Yerevan to produce a rare series of dispatches.

But the Sumgait and Khojaly anniversaries presented the toughest test yet for those hoping to tone down bellicose rhetoric.

To be sure, hardliners still dominated the discourse on February 26, particularly in Azerbaijan. Many of the Azerbaijani diplomatic Twitter accounts – including that of the foreign ministry – posted a conspiracy theory meme, using the hashtag #SumgayitProvocation1988, claiming that Armenians carried out the pogroms themselves. The government continued to extravagantly promote awareness of the Khojaly events, which it calls a “genocide,” at events abroad. (According to Azerbaijani government figures, 613 people died in Khojaly; independent estimates suggest it was closer to 400.)

And while Aliyev himself may have softened his own rhetoric, a large march in Baku commemorating Khojaly nevertheless featured signs blaming “Armenian fascism” for the killings. 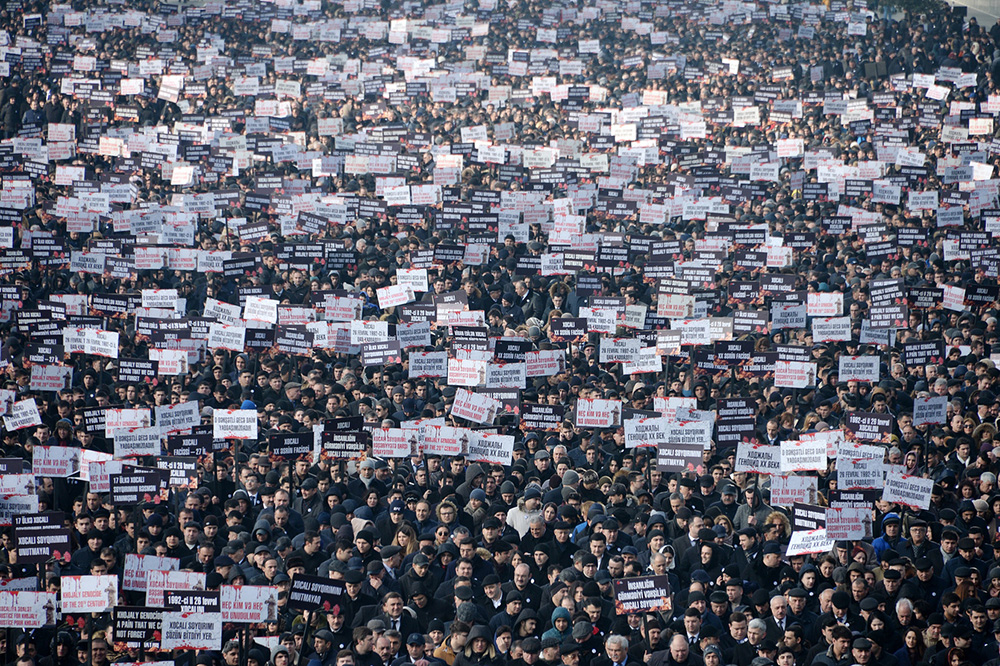 Some at the march said they were not yet ready for peace. “I don’t want anything like this [Khojaly] to happen again, so I’m not sure we can live with such cruel people,” one participant, Aydin Orujov, told Eurasianet. “Peace is not an option until they stop brainwashing their kids to hate us. They’ve always hated us, and Khojaly was the result of that.”

Another participant, 66-year-old Sevinj Samadova, said: “I don’t want peace unless they return all of our lands.” She said she was from Aghdam, an area now occupied by Armenian forces. “I’ve been away from my home, my family’s home, for 30 years. Peace will only come after things go back to the way they were before the war,” she said.

And while the Armenian government may have softened its approach, other Armenians continued to fan the flames. The human rights ombudsman of the de facto government of Nagorno-Karabakh issued a statement blaming the Soviet Azerbaijani authorities for organizing the Sumgait pogroms. (The historical consensus holds that the killings were carried out by individuals while the authorities negligently stood by.)

An unofficial march in Yerevan marking the Sumgait events explicitly tied the commemoration to the ongoing diplomatic process; participants “swore an oath not to allow the concession of territories for which blood has been spilled,” according to an account from the news website Caucasian Knot. (Any peace agreement between the two sides will almost certainly involve Armenians returning at least some of the Azerbaijani territories they currently occupy.)

“To see real changes on these kinds of topics [Khojaly and Sumgait] I think it’s very early, these are such emotional topics for both sides,” the diplomat said.

The Azerbaijani government has started making tentative approaches towards journalists that appear linked to the idea of preparing the population for peace, said Arzu Abdullayeva, a longtime peace activist and head of the Baku Helsinki Citizens Assembly. “Maybe they want to start creating a new vision of the roots of the conflict, maybe,” she told Eurasianet. “Nobody knows what the next step will be because things change very quickly according to the political situation, the geopolitical situation.”

Nevertheless, she said, emotions around Khojaly were sure to remain raw, and she recalled working in Karabakh in 1992 helping survivors of the killings. “It was a very painful thing, it happened in front of our eyes,” she said.

With additional reporting by Austin Clayton. Joshua Kucera is the Turkey/Caucasus editor at Eurasianet, and author of The Bug Pit.