On the French Riviera, émigrés fight a Russian advance

The Kremlin and descendants of Russian émigrés are wrestling over influence, property, and some old clothes. 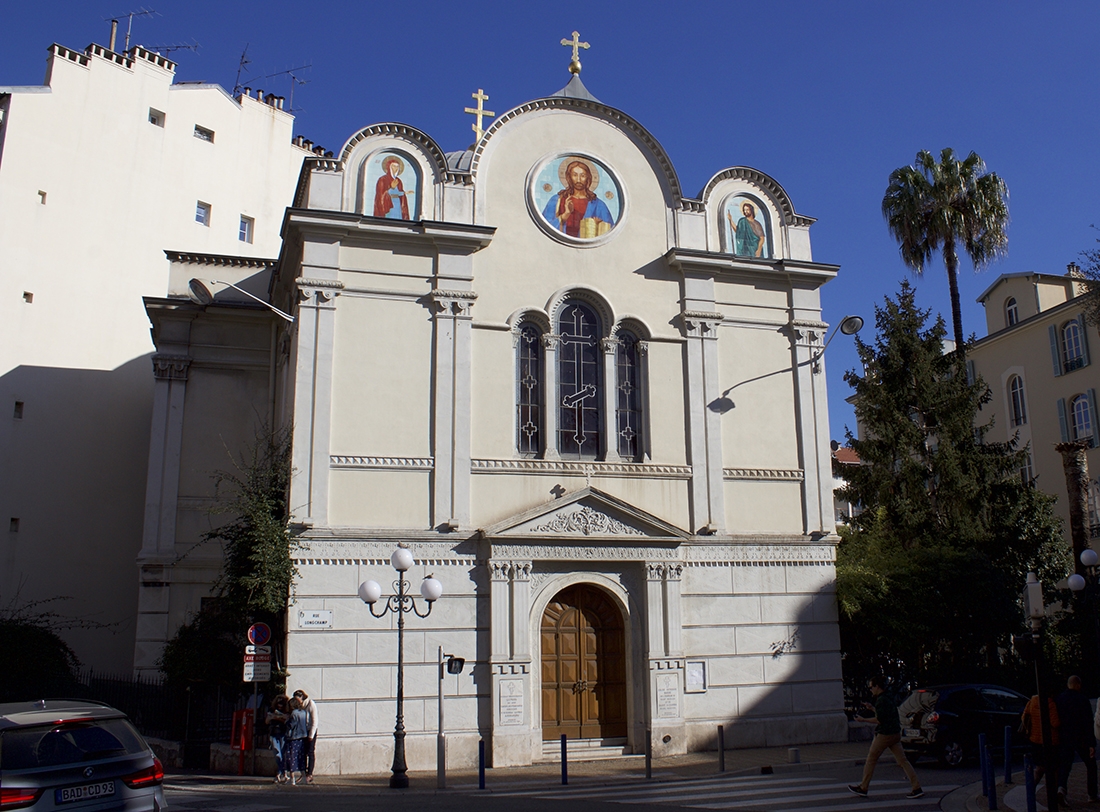 The St. Nicolas and St. Alexandra Church on Rue Longchamp in Nice (all photos Killian Cogan)

Last November, Alexis Obolensky received a phone call. “I’m in front of your church,” said a court bailiff. “There are objects we want to retrieve. I’m with a locksmith and police. If you don’t come now, we’ll break in.”

The objects inside the St. Nicolas and St. Alexandra Church on Rue Longchamp: a bloodied shirt, a woolen vest and golden garments said to have belonged to Russian Tsar Alexander II. A French court had ordered they be turned over to Russian consular officials who wished to flaunt the emperor’s clothes at a reception in Paris.

Obolensky, a tall man in his seventies, is the vice president of the Orthodox Worship Association of Nice – ACOR, in its French acronym – an organization founded in 1923 to manage a small Russian Orthodox parish in this city in the south of France.

Nice has had a long relationship with Russia. Now a favored haunt of oligarchs and other moneyed tourists from the post-Soviet world, the Mediterranean climate lured the imperial family as early as the 1850s. The nobility followed suit and by the late 19th century, Russian elites had formed a sizeable colony on the French Riviera. Two churches and a cemetery still testify to their role in the region’s history.

This heritage is at the heart of a feud between Moscow and descendants of the Russian émigrés who established themselves in France after the Bolshevik Revolution. For the past decade or so, Moscow has led a dogged campaign to gain control of property it claims around the world. And Nice carries symbolic value.

Part of Moscow’s strategy has been to promote rapprochement with the White émigré communities that left Russia after the 1917 revolution. A milestone was achieved in 2007 when the Russian Orthodox Church Outside Russia (ROCOR) – a church set up in the United States by Soviet exiles – reconciled with the Moscow Patriarchate, which is close to the Kremlin.

Yet these endeavors have caused a number of schisms within émigré circles, notably in France.

Obolensky, whose parents fled to France in the early 1920s, rejects reunification with Moscow. Along with a handful of unrepentant émigrés, he has been at the forefront of a battle to fend off Moscow’s advances in Nice. But confronted by the consular officials and police last November, he opened the door and surrendered the tsar’s clothes.

It was just the latest episode of a protracted saga. The battle began in 2006 when Russia claimed possession of Nice’s St. Nicolas Cathedral. Completed in 1912 with funds from Tsar Nicolas II, the Cathedral remains somewhat incongruent with its gilded domes amid the local pines and palm trees. It was handled by the ACOR, Obolensky’s association, until Moscow won a legal case and took it over in 2011.

“They kicked us out of our church!” cries Obolensky, who had served as warden for seven years.

Some of the émigrés, however, have welcomed Russia’s return.

Pierre de Fermor, a dandy-like figure whose grandfather was a general in the White army, is one. In 2010, he formed a rival organization called Friends of the Russian Cathedral to assist the Russian Embassy in its efforts to retrieve local heritage.

“I think it’s perfectly logical that the Cathedral should return to Russia since she built it in the first place. Communism is over, Russia is back,” he maintains.

In 2016, the quarrel took a particularly aggressive turn.

Once it had recovered the St. Nicolas Cathedral, Moscow pushed for ownership of Nice’s Orthodox cemetery, a serene place lush with orange and olive trees that hosts the graves of Russian refugees who died on the French Riviera, including a few members of the imperial family. At the behest of Russian officials, local media reported, a Frenchman named Christian Frizet broke the locks to the cemetery – hitherto administered by ACOR – and installed a placard declaring it Russian property.

Infuriated, Obolensky placed a sign on the doors stating: “Hands off, Mr. Putin! You are not in Crimea here!” A spokesperson for the Russian consulate in the region said he was not aware of these events, and said that though Russian officials can access the cemetery, it is managed solely by ACOR.

Another dispute arose after Igor Sheleshko, a former Russian soldier living in Nice, was killed in a 2016 terror attack. As places in the cemetery are usually reserved for Orthodox families long established on the Riviera, a proper patch of land could not be allocated for the deceased Russian national. Russian officials decided to bury Sheleshko in a spot that had been used as the graveyard’s garbage dump.

“It’s an obvious display of force. They buried him forcibly and without our consent,” says Obolensky.

For Andrei Eliseev, the archpriest of the now Moscow-run St. Nicolas Cathedral, this row has nothing to do with religion.

“To me it’s largely a dispute about property. Though much can be explained by the psychological trauma related to Russia’s history on the part of the émigrés,” contends the blue-eyed clergyman in almost faultless French. “Many of these people lost their property during the revolution, that’s why they’re so adamant about the estate here. But we’re talking about fourth-generation exiles; it’s as if the trauma is genetic.”

Alexandra Castillon, 77, begs to differ. A teacher of catechism and devoted member of ACOR, she thinks the conflict is all about the church.

“I’m 100 percent opposed to uniting with Moscow because I don’t want to be part of a church that is subservient to the state,” she explains, sitting inside the St. Nicolas and St. Alexandra Church on Rue Longchamp, which is still run by ACOR. “How can you trust a Patriarch that honors the memory of communism? They [the communists] blew up our churches with dynamite! We have no trust in the institution of the Russian Orthodox Church.”

Castillon and the other members of ACOR belong to a local parish that is still under the jurisdiction of the Istanbul-based Ecumenical Patriarchate of Constantinople. This patriarchate, which recently oversaw the Ukrainian church’s split from Moscow, has long sheltered Orthodox parishes that reject Russian leadership.

As it seizes real estate abroad, Russia is also bolstering the global role of the Moscow Patriarchate. In 2016, the Moscow Patriarchate opened a gleaming new cathedral and cultural center in the heart of Paris. More recently, in December 2018, it created an exarchate dedicated to Western Europe. Its purpose? “The insertion of the Russian Orthodox Church in Europe,” explains Father Andrei.

“Over all these years since our families fled to France, we developed our own, independent, ecclesiastical model,” says Castillon. “They believe everything Russian must be theirs. But we say no!”

In the meantime, Obolensky awaits another court decision regarding the tsar’s clothes, which have not been returned. He seems determined to keep up the fight between his tiny association and the Russian megalith. But it is not hard to detect a sense of grim resignation.

“Since 2006, we have had to deal with judicial officers, lawyers and courtrooms constantly. They have armies of lawyers whereas we’re on our own. We’re drained. And that’s precisely what they’re banking on,” he says.