One year after arrests for war crimes, Azerbaijan remains silent

Last year Baku took the surprising step of announcing the prosecutions of four soldiers for crimes against Armenians. But there is no word on what happened since – and no reciprocation from Armenia, either. 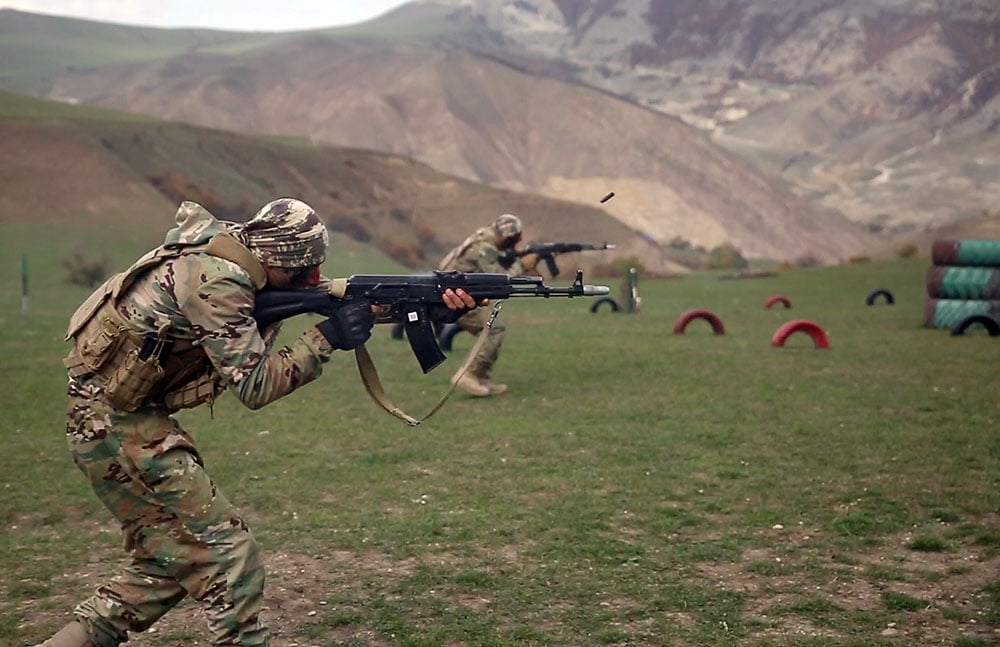 Last December, Azerbaijani prosecutors announced that they were charging four soldiers with crimes committed against Armenians in the just-completed 44-day war. It was a surprising step that offered some hope that the many crimes committed in the conflict – and often documented on social media – would be punished.

But a year later, no further information has been released. Emails from Eurasianet seeking comment from prosecutors have gone unanswered.

The only information about the cases remains a single press release issued December 14, 2020, on the website of the general prosecutor’s office, that announced that four soldiers had been detained and charged with “insulting the bodies of Armenian servicemen killed during the fighting for the liberation of our lands, as well as inhumane treatment of captured Armenian servicemen.”

The press release continued: “Necessary research will be conducted on other videos spread on social media and the public will be provided with detailed information about the results.”

Instead, the criminal cases announced then have been closed to the public. International organizations and embassies that have tried to follow the cases have been unable.

No further cases have been announced, either, despite evidence of far more crimes than just the four that were prosecuted. In the aftermath of the war a stream of videos, usually shot by soldiers themselves and released on Telegram channels, depicted torture, humiliations and mutilations of corpses. Several executions of captives were shown, and at least two live beheadings.

Similar videos, although a smaller number of them, also emerged from the Armenian side. Armenia has announced no prosecutions of war crimes committed against Azerbaijanis. Eurasianet asked the state prosecutor’s office if any cases were being pursued, in an email response a spokesperson said that: “There is one joint investigation involving several soldiers. An investigation is underway to identify crimes and people who committed those crimes.”

Meanwhile, human rights groups have documented and verified many of the crimes from both sides that had been documented on social media.

In November, the Council of Europe’s Commissioner for Human Rights, Dunja Mijatović, published a memorandum on the human rights consequences of the war. It noted the announcement of the four prosecutions in Azerbaijan, but said there has been little follow through, given the large number of crimes documented by human rights groups.

“To date, there is however no indication that any of the other incidents documented above have been independently, promptly, publicly and effectively investigated by the relevant [Azerbaijani] authorities, Mijatović wrote. “There is also no information about any investigations or prosecutions by Armenian authorities in relation to those allegations.”

Both Armenia and Azerbaijan took the occasion of the memo to blame each other for failing to pursue the crimes against their side.

Azerbaijan takes “very seriously the allegations of inhumane and degrading treatment by some Azerbaijani servicemen over the captured Armenian military,” Azerbaijan said in its formal response to the report. “On the contrary, ‘there is no information about any investigations or prosecutions by Armenian authorities’ as it was rightly pointed out by the Commissioner,” the response continued.

“[T]here should be no illusion that Azerbaijan would voluntarily agree to an independent, thorough, and consequential investigation into allegations of war crimes during the hostilities of September-November 2020,” Armenia wrote in its response.

“But the official press release indicates that four Azerbaijani servicemen were accused of charges based on Article 245 of the Criminal Code (“Violation of a grave or corpses”). It appears that no servicemen have been prosecuted for the alleged ill-treatment or torture of Armenian prisoners of war, soldiers or civilians,” Abbasov told Eurasianet.

The lack of information about the cases is in part a factor of excessive secrecy and lack of transparency in military issues, said Baku-based analyst Anar Mammadli.

“What is happening in the army is secret. Unfortunately, there is no transparency,” he told Eurasianet. “This case is an example of the overall trend – we don’t know what happened.”

In addition, the negative reaction among some Azerbaijanis to the prosecutions showed that the government did a poor job of explaining the rationale.

“It is necessary to explain to people the principles of international humanitarian law, what is envisaged in the Azerbaijan criminal code in such cases,” Mammadli said.

In Armenia, there is similarly little appetite for pursuing crimes committed against Azerbaijanis.

“[I]n Armenian society, a mindset of victimhood resulting from the 1915 Armenian genocide and exacerbated by the Nagorno-Karabakh war continues to prevail such that Armenians may lack sufficient critical self-reflection to be able to remain completely objective in investigating possible wrongdoing on their part,” wrote Sheila Paylan, a lawyer and human rights expert, in a recent piece for Foreign Policy.

With additional reporting by Ani Mejlumyan