Many erstwhile allies of the government are distancing themselves from controversial negotiations with Azerbaijan. 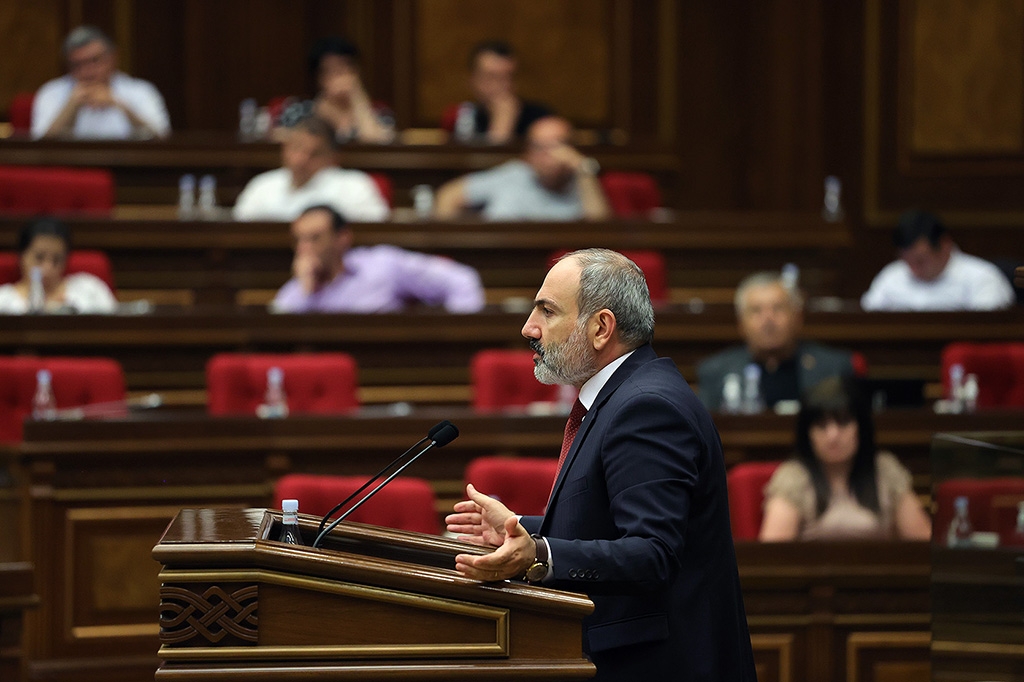 Pashinyan at an emergency meeting of parliament on May 20 (primeminister.am)

Fear over territorial concessions has resulted in mounting opposition to Prime Minister Nikol Pashinyan’s efforts to begin negotiating over the border with Azerbaijan, resistance that now includes the country’s liberal civil society sector and even its own Foreign Ministry.

This new stage in Armenia’s political crisis was prompted by news that the country has been negotiating a new agreement with Azerbaijan following the defeat in last year’s war.

Leaked portions of the new draft document speak only of the creation of a new trilateral border commission, which also would include Russia. But reports that the full deal may also entail the handover of several villages along the northern border have raised alarm among Armenians and led to a growing resistance to any sort of border negotiations by the current authorities.

Opposition members of parliament called an emergency session on May 20 to discuss the issue. Edmon Marukyan, the leader of the opposition party Bright Armenia, said that any significant international agreement should be subject to ratification by parliament, and that the current government – which is acting in an interim capacity, having resigned to trigger snap elections – doesn’t have the right to sign such an agreement in any case.

Elections are scheduled for June 20, and Marukyan said that such sensitive matters should wait for a new government. “Wasn’t it possible to not negotiate and not sign any agreements until after the elections, with a legitimate mandate?” he asked. He proposed a declaration calling on any agreements regarding territorial changes to be made only via referendum, but it failed when no members of the ruling My Step alliance voted for it.

Similar arguments have been made by a coalition of liberal civil society organization, many of them formerly strong supporters of Pashinyan. “Pashinyan cannot make momentous decisions on behalf of the Republic of Armenia and unilaterally declare them to be in accord with Armenia’s interests, referring to them as an 'announcement’ and failing to follow the necessary legal processes for international agreements,” read a joint statement, which was signed by groups including the local branches of Transparency International and the Open Society Foundations. “In light of these events, we find it necessary to remind Acting Prime Minister Nikol Pashinyan that, under Article 205 of the Armenian Constitution, alterations to the territory of the Republic of Armenia must be decided through a referendum.” [Editor's note: Eurasianet receives funding from the Open Society Foundations and other grant-making entities.]

Public sensitivity over the issue has been such that a photo of lightning over Yerevan on May 23 went viral for its similarity to a portion of Armenia’s border. “My god, is this a sign?” one Facebook user wrote.

At the parliament session, Pashinyan accused his opponents of sabotaging Armenia’s interests. The draft document would reportedly also call for Azerbaijani troops to leave the area around the southern Armenian region of Syunik that they advanced to nearly two weeks ago.

“The so-called opposition is doing everything so that Azerbaijan doesn’t leave Armenian territories,” the acting prime minister said. “Because we don’t have a demarcated territory with Azerbaijan since independence, there are issues. Let’s say this situation [at the Syunik border] is sorted out, what if it happens again, every time we should make it into an international case? This situation has to be controlled and during this period an agreement was reached to create a commission.”

But many of Pashinyan’s allies have been distancing themselves from the alleged draft agreement.

Andranik Kocharyan, the chairman of the parliament committee on defense and security, and a strong Pashinyan supporter, said that he was not aware of the existence of the document until Pashinyan confirmed it on May 20.

“I haven’t seen, haven’t heard about that document,” Deputy Foreign Minister Avet Adonts said the same day. “The MFA has no information regarding it.”

Pashinyan dismissed such claims. “The documents are being received through the MFA, how else am I getting them?” he asked rhetorically at the parliament session. “Now the times are like this, maybe people hear Mishik’s [Mikayel Minasyan, the government critic who initially leaked the document] name and their knees start shaking and they say, ‘it wasn’t us, it wasn’t us,’” said Pashinyan, mockingly raising his hands.

The Foreign Ministry subsequently issued a statement on May 21 that threw cold water on the border demarcation process, saying it should take place only as “part of the comprehensive peace settlement of the conflict, within the framework of which issues of de-occupation of the territories of the Republic of Artsakh [an alternate Armenian name for Nagorno-Karabakh] and determination of the final legal status of Artsakh under the auspices of the OSCE Minsk Group Co-Chairmanship should be addressed first.” Those two conditions have remote prospects, at best, of being fulfilled any time soon.

Meanwhile, concern also mounted over the fate of the territory that was alleged to be under discussion, through which passes a key highway. “Three of those seven villages are crossed by the international road to Georgia, which is also the road that connects Armenia to Russia,” said military analyst Tatul Hakobyan in a Facebook broadcast. “Pashinyan said it’s something to discuss … I was shocked by his words.”

Hakobyan noted that the demarcation and delimitation will have to be done using Soviet maps between the two former Soviet Socialist Republics, which were not intended for determining international boundaries and which can vary in small but important areas. “We don’t know which maps will be used, from what years,” he said. “There are lots of uncertainties because we are the losing side. They are dictating the rules of the game just like Armenia was after 1994 [when Armenia won the last war between the two sides]. “Then we weren’t interested in maps, just like they aren’t now.”