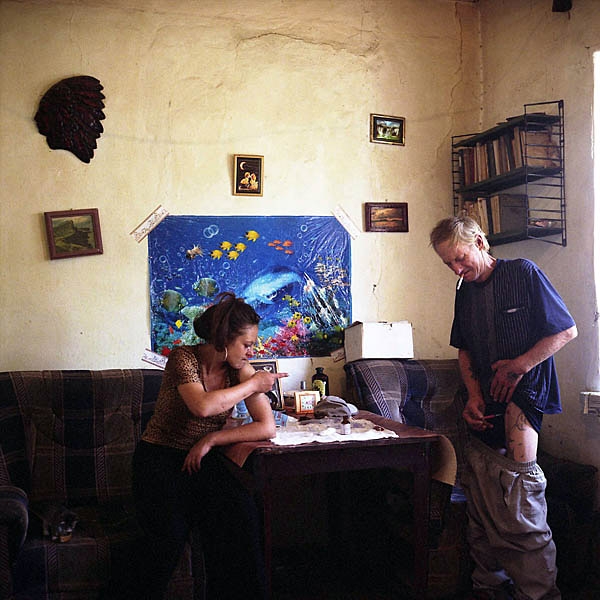 Osh is a center of drug use and trafficking in Central Asia. (Photo: Rena Effendi)

Drug lords likely played a role in stirring up the recent political violence in southern Kyrgyzstan, regional experts say, adding that organized criminal gangs are intent on fomenting instability in order to protect their trafficking networks.

At least two people were killed and dozens wounded during two days of upheaval in Kyrgyzstan’s three main southern cities, Batken, Jalal-abad and Osh on May 13-14. [For background see the Eurasia Insight archive].

Supporters of ousted president Kurmanbek Bakiev were out in front of the uprising, but striving to take maximum advantage of the upheaval were crime kingpins, local analysts say.

For members of Osh’s drug mafia, the demise of Bakiyev’s administration and its replacement by the Rosa Otunbayeva-led provisional government in Bishkek represents a threat. The Bakiyev administration was generally perceived as turning a blind eye to organized criminal activity in southern Kyrgyzstan. The concern among traffickers is that the provisional government wants to assert greater control over the South, and that it might seek Russia’s help to accomplish this aim.

“At the moment, drug lords are not afraid of Kyrgyz politicians; they are afraid of Russia. Kyrgyz politicians can be bought,” said the editor of a pro-government newspaper in southern Kyrgyzstan, who wished to remain anonymous for fear of reprisals. “They are afraid of Russia, because it is suffering a lot of casualties and victims from drugs. [Russian Prime Minister Vladimir] Putin wants to sort out the situation here and create order. And if the Kremlin will put its people here, drug lords have a difficult time ahead.”

“All of the criminal elements in the South are related to the drug trafficking, because the business controls a lot of money,” he asserted.

Drug traffickers may well have fueled the May 13-14 clashes because they “want to use chaos for their own needs. They don’t care how the provisional government perceives them,” said Alexander Zelitchenko of the anti-drug unit at the Interior Ministry. “Once there is a stable regime, that regime will start fighting them.”

Criminal groups “are everywhere. They have such huge amounts of money that they can really influence the situation,” Zelitchenko added.

Crime bosses in Osh certainly appear to have a major incentive to sow havoc. Many narcotics trafficking studies list the Osh region as one of the most important transit hubs in Central Asia for drugs flowing out of Afghanistan on their way to Russia and Europe. For example, the UN Office on Drugs and Crime (UNODC) recently estimated that 20,000 kilograms of narcotics transit Kyrgyzstan every year, much of it passing through Osh. Kyrgyz authorities interdict only about 5 percent of the overall total being trafficked through the country.

Whether or not they fostered violence, or merely took advantage of political discontent, crime gangs wanted to provide the provisional government with a show of strength, said Ajdar Kurtov of the Russian Institute for Strategic Studies in Moscow. “At the moment, [criminals] want to get some power and show their force,” explained Kurtov. “In politics, it is very important to show force. Criminals understand that well.”

The newspaper editor added that drug lords wanted to get the attention of provisional leaders because “they want to take part in the decision-making process and they want their interests to be considered.”

As they try to hamper the spread of stability in southern Kyrgyzstan, criminal gangs can play on the general discontent of southerners, who have long tended to believe that northern Kyrgyzstan has received an disproportionately large share of state resources and attention. In addition, the South has the inter-ethnic issue to contend with, given the region’s large Uzbek minority. Some prominent Uzbeks in the South have expressed support for the provisional government, apparently with the expectation that such backing will translate into an expansion of civil rights for national minorities.

Southern Kyrgyzstan was Bakiyev’s traditional support base, and his departure from power has left many southerners fearful that whatever gains they made during his tenure in power may be rolled back by the provisional government. Tolon Dyykanbayev, the head of the Committee to Protect Bakiyev in Osh, said his group is attracting new members these days because of the “desperation of the southern people.” After the early April uprising that brought down Bakiyev, “southerners have become outlaws,” he complained.

A prominent human rights activist in Batken who spoke with EurasiaNet.org on condition of anonymity, suggested that criminal gangs will emerge from Kyrgyzstan’s current political crisis with their trafficking operations largely intact. “Consider the level of corruption and the fact that, although the interim government changed and replaced a lot of people, basically the local elite stayed in their places. For drug lords it is not a problem to buy them,” she said.

Kyrgyzstan is unique, Kurtov cautioned. “Unlike other countries with drug-related corruption, Kyrgyzstan doesn’t have one or two groups controlling the whole drug trafficking business. There are always different people and clans,” he said. Such a diffuse network will be harder to manage.