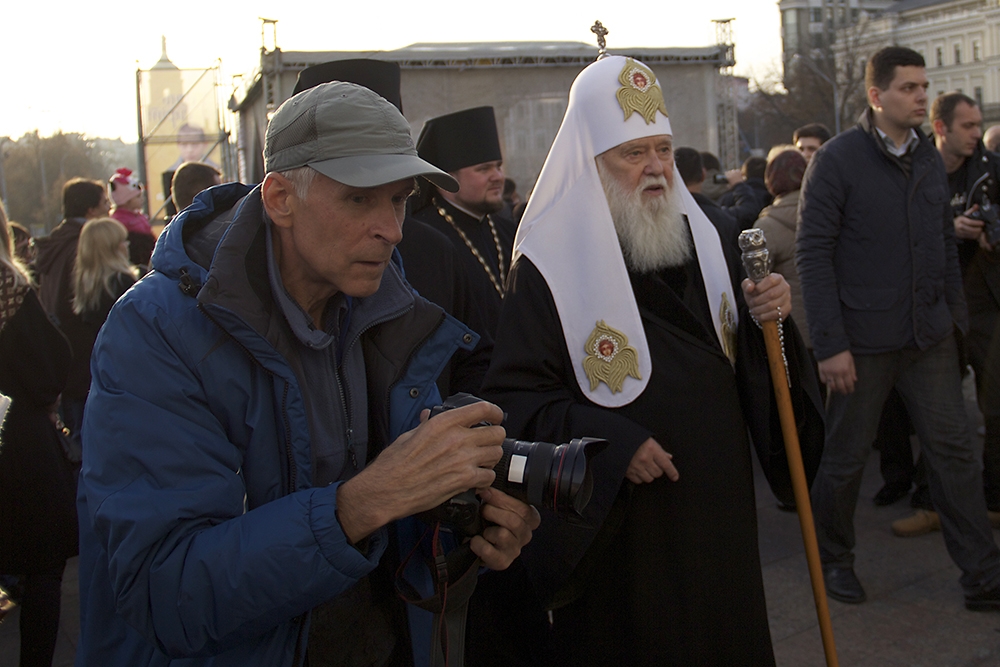 Patriarch Filaret heads the Kyiv Patriarchate, the branch of Ukrainian Orthodoxy that is loyal to President Petro Poroshenko’s administration. He recently sat down with EurasiaNet.org to discuss religious affairs in Ukraine and how the ongoing conflict between Kyiv and Moscow is extending into the spiritual sphere.

In 1991, after Ukraine gained independence, then-Metropolitan Filaret Denysenko led a different kind of independence movement. At that time, he was the highest-ranking cleric of the Russian Orthodox Church in Ukraine, and he believed Orthodox bishoprics in Ukraine should secede from the Moscow Patriarchate and form an independent church entity.

Though the movement failed after an all-Orthodox council denied the Ukrainian quest for separation, Filaret went on to lead his own break-away patriarchate. Believers have steadily followed: according to polling data, at least half of all Ukrainian Orthodox believers these days now identify with the “schismatic” Ukrainian Orthodox Church-Kyiv Patriarchate, despite its lack of formal recognition within the Eastern Orthodox councils. Full recognition can only come if Moscow willingly grants Kyiv independence, or autocephaly.

The Moscow Patriarchate casts itself as the protector of the true Orthodox faith, a conceit that has led Russian leader Vladimir Putin and others in Moscow to develop religious justifications for the seizure of Crimea and the Kremlin’s ongoing support for separatists in eastern Ukraine. For its part, Filaret’s Kyiv Patriarchate has allied itself unequivocally with Ukraine, supporting the war effort by fundraising for equipment and sending chaplains to minister to pro-government troops.

A transcript of Filaret’s interview with EurasiaNet.org follows:

EurasiaNet: How is the political conflict between Russia and Ukraine exacerbating the division within the Ukrainian Orthodox Church between parishes loyal to the Kyiv and Moscow patriarchates?

Patriarch Filaret: Right now Russia has committed an act of aggression against Ukraine. … Under these conditions, the church has had to face the question: does a church need to bless and protect its fatherland? The [Ukrainian Orthodox Church under the] Moscow Patriarchate has found itself in a very delicate position. On the one hand, it can't speak against its people. On the other hand, being dependent on Moscow and having their own Moscow patriarch, they cannot call aggression by its name. Some of the bishops and priests have openly spoken in support of [Russian leader Vladimir] Putin and in support of Russia, against the Ukrainian government and against Ukraine as such. That's why believers of this or that parish, after such a statement, either chase out that priest or gather signatures and say they do not want to be in a church that does not protect its fatherland.

EurasiaNet: How are religious divisions playing out in the Donbas conflict zone?

Patriarch Filaret: The religious situation in Donbas is difficult. The regions that have been captured by separatists and terrorists have a ban on church services by the Kyiv Patriarchate, Greek Catholics, Roman Catholics, all Protestant churches. The only priests who are able to hold services are the priests of the Moscow Patriarchate. In addition, the priests of the Moscow Patriarchate not only make available its buildings for terrorists, they are storing weapons. The “Russian Orthodox Army” formation is also there. Of course it's not made up of priests, it's made up of laity, but they are supposedly defending Orthodoxy against the “Banderists” and “fascists.” [Derisive names given Ukrainian nationalists – ed.] (But) if you have any army, then it belongs to a state, the Church cannot have its own army. That's why calling it an “Orthodox army” is at the very least incorrect.

EurasiaNet: You have called Vladimir Putin “Cain.” Can you explain?

Patriarch Filaret: I called him a “new Cain.” Because Cain, the son of Adam, killed his brother, Abel. And when God asked him, where is your brother, Abel? Cain answered with a lie: “Am I my brother's keeper?” So Putin is like Cain because he kills his brothers, the Ukrainians. And in addition to that he tells the whole world that he is not at war in Ukraine: that there is no war, that there are no Russian troops there. But that's not true. Smerch launchers, Grad, “hurricanes,” tanks, mortars – you cannot buy these things in a store in Ukraine.

EurasiaNet: How do you describe relations between the Kyiv Patriarchate and the Ukrainian government?

Patriarch Filaret: Our church supports the people. We also support the government, as long as the government is not lawless. If it is lawless, the Church tells it the truth about what it must do and what it must not do. That's what happened with [former] President [Viktor] Yanukovych. … The [current] president has a normal attitude toward us, because our church supports the battalions. We send chaplain priests there, we give humanitarian aid in the form of clothes, we bought them night vision goggles, we've given them transport, we collect money for this. So our relationships with the president, and with the parliament, and with the cabinet, are normal.

EurasiaNet: The Moscow Patriarchate and Putin have cast themselves as protectors of “traditional values,” and thus they have placed themselves in opposition to Western European principles. Your church, on the other hand, supports the Ukrainian government’s desire to join the EU. Can you elaborate on where you stand in the “values” debate?

Patriarch Filaret: We don't accept same-sex marriage, we don't accept a spiritual decline. But we do accept democracy, technological progress, freedom. So we accept European values, though not some of the deviations from those. That's the same thing that other countries that are part of the EU are doing. For instance: Greece. Does it accept same-sex marriage? It does not. Or Bulgaria, or Romania. But they are part of the EU. There are countries that won't accept applicants for work from people who are living in same-sex couples. We are against discrimination. That is, you should hire people, the same as any other citizen. But against his sin you have to fight. You have to explain to him that he's chosen the wrong path, at the church level, and the level of the society, of schools, universities.

EurasiaNet: Do you still see a possibility for a united Ukrainian church separate from the Moscow Patriarchate?

Patriarch Filaret:  It's here already. We have this church, the Kyiv Patriarchate, an autocephalous church that is supported by the people. And military events have confirmed that Ukraine should have the kind of church that the Kyiv Patriarchate is. In Ukraine there are a lot of people in the leadership, in the clergy [of the Moscow Patriarchate] who want to unite with us into one church. But [they hesitate because] they are worried that Moscow will punish them as anathema, denying them the ranks of clergy, of bishops. They worry. But the people, whom you cannot excommunicate, they are more decisive. They decide to leave the roster of the Moscow Patriarchate, and they just do it.