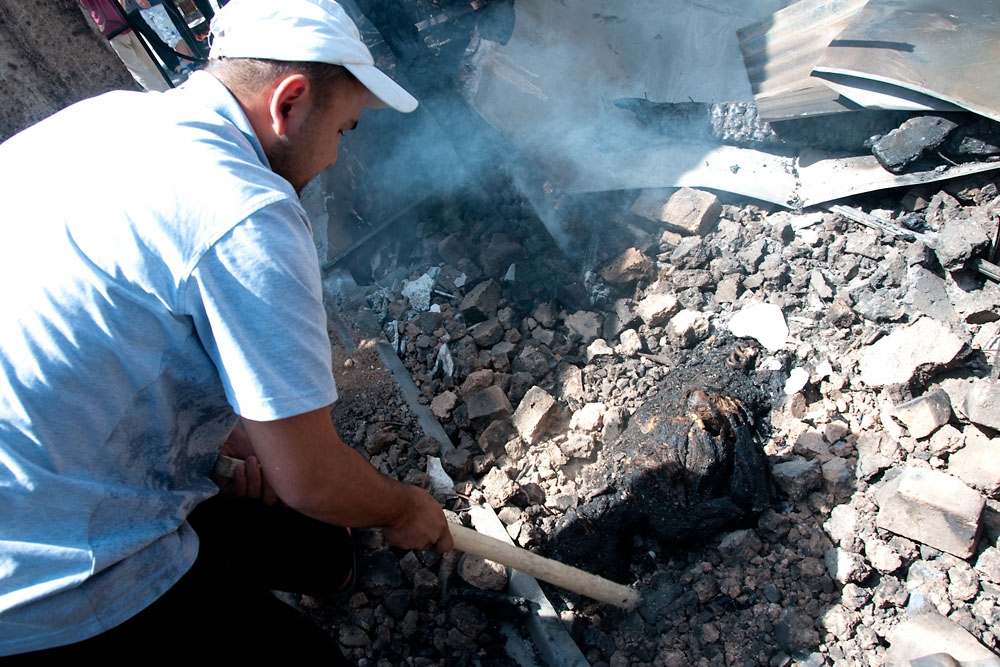 A man searches for the charred remains of three ethnic Uzbeks killed and burned in a shop in central Osh. (Photo: Dalton Bennett)

Those who lived through five days of violence in southern Kyrgyzstan are not sure who started the fighting, or why. But many have a horror story to tell.

In Osh, the epicenter of the violence, the mayhem abated on June 15, but there were few signs that life was returning to normal. Almost all shops, restaurants and businesses remain closed amid the prospect of further violence. Some of the closed businesses had been severely damaged by looting and arson, while shops next door remained untouched. Uzbek-owned businesses were targeted for destruction, some Uzbeks contended.

“They knew exactly whose business was Uzbek and whose was Kyrgyz,” said an Uzbek who spoke on condition of anonymity.

Next to the shell of an Uzbek teahouse gutted by fire was a long shop whose owners had painted the word “Kyrgyz” across the front in an apparent effort to prevent an attack on the property. “There’s an impression that it [the arson and looting] was planned because it is only Uzbek places being hit,” said another Uzbek, a man who would only identify himself as Babur.

The threat of violence remained constant, and apt to arise suddenly. For example, not far from where Babur spoke, a group of elders was drinking tea and mulling the tragic events of the past few days. Suddenly, a pick-up truck carrying gunmen appeared about 50 meters away, and some of its occupants fired bursts from their AK-47 assault rifles into the air. Then, the truck hauled off amid the screech of its tires.

Asked who was behind the violence, locals struggled to formulate a coherent response. Some suggested that forces loyal to Kurmanbek Bakiyev, who was ousted amid political violence in April, were responsible for starting the fighting. Others pointed to outside forces or drug gangs with an interest in promoting instability in southern Kyrgyzstan. However, most agree that whoever instigated the attacks, local Kyrgyz took part. Many ethnic Kyrgyz residents did not dispute this, but no one admitted to knowing any of the participants. Officially, almost 200 people died in the violence. But unofficial estimates put the toll at over a thousand.

Adding to the climate of fear in Osh is graffiti scrawled across walls in several parts of the city. “Death to Sarts!” read one wall, using a derogatory term for Uzbeks. “Sarts Out!” said another. Osh has within the span of a few days become an ethnically divided city, with Uzbeks and Kyrgyzs wary of wandering out of their own neighborhoods.

Two ethnic Tartar women who left their neighborhood on June 16 to buy food in the city center said they witnessed a chilling attack on an Uzbek woman. “They grabbed her by the hair and bashed her head on the ground,” said one of the witnesses, sobbing as she recounted the incident. “She was shouting: ‘Don’t kill me! I’ve got three children.’ We tried to get the military to intervene but they pushed us away. That has just happened in front of our eyes.”

Most Uzbek women and children have fled Osh, while many men have remained behind to defend their neighborhoods, erecting makeshift barricades, using anything from buses and burned-out cars to debris from looting and branches sawn off trees.

At the Yorkishlak border crossing a short drive outside Osh, around 1,000 women and children gathered near the checkpoint. Some hoped to cross into Uzbekistan, despite Tashkent’s announcement that it cannot take accept more refugees. But a large number seemed reluctant to leave. “Seven generations [of my family] have lived here,” said Nurkhon Kurbanova, an elderly woman who had spent the last few nights at the border seeking refuge from attacks. “We don’t want to leave our land.” Like many others here, she hoped to return home soon.

Makhbuba Kochkarova fled from the Furkat District to the border after her 21-year-old nephew was killed and her house burned down on the first day of the violence. “They even killed infants, they cut infants with an axe,” she said, bowing her head. “The Uzbeks had no weapons, only sticks to protect their houses. The Kyrgyz had weapons – machine guns. … The snipers were killing everyone.”

After five days of lawlessness, there is now a visible security presence in Osh, with law enforcement officers and troops patrolling on foot and the occasional tank rattling through the streets. There are also roadblocks, both official ones manned by soldiers and unofficial ones set up by vigilantes in camouflage and armed with makeshift weapons, including one man with a scythe.

As the 6 pm curfew approached, troops at official roadblocks – some with their faces covered by balaclavas and bandanas – became more aggressive, pointing AK-47s at cars and shouting at drivers to obey the curfew.

As Osh settled in for another night of uncertainty, Gulistan – a Meskhetian Turk living on a road with an Uzbek neighborhood on one side and a Kyrgyz one on the other – summed up the mood. “We’re afraid,” she said. “At night it’s like a fireworks display – 10 shots over here then 10 shots over there!”