The meeting was being closely watched for clues to the future of Armenia-Russia relations, which have been thrown into question as a result of Pashinyan's rise. 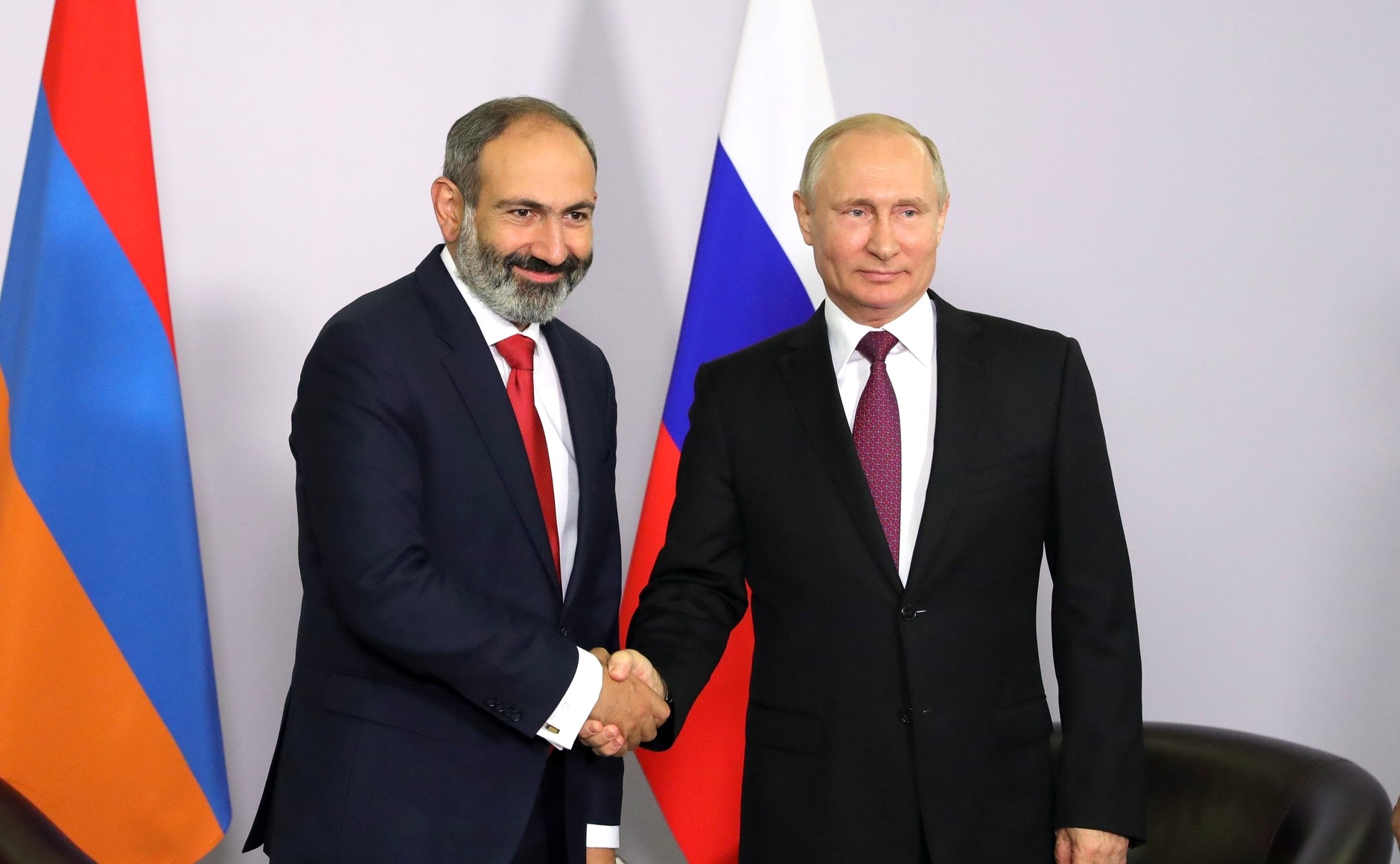 Armenian Prime Minister Nikol Pashinyan and Russian President Vladimir Putin meet May 14 in Sochi, Russia. The meeting was the first between the two men, as Armenian-Russian relations enter a fraught period. (photo: kremlin.ru)

Newly elected Armenian Prime Minister Nikol Pashinyan met with Russian President Vladimir Putin for the first time, as the two sides begin to navigate the choppy waters that lie ahead in the two countries' relationship.

Pashinyan and Putin met in Sochi on the sidelines of a May 14 summit of the Eurasian Economic Union (EAEU), the Russia-led economic bloc that Pashinyan had opposed in his days as an opposition politician but to which he now vows to stay loyal.

“No one can doubt the importance of Russian-Armenian relations,” Pashinyan said at a brief joint appearance with Putin before the two men met privately. He also praised Russia's “balanced position” during the protests that swept Pashinyan into office. Russia generally sees popular revolutions in its neighborhood as an urgent security threat, yet stood to the side during the protests that ultimately forced the Kremlin's reliable partner, former president Serzh Sargsyan, to resign.

“We very highly value this balanced position, which Russia took during our internal political crisis – it was a very constructive position,” Pashinyan said. “This is appreciated not just by our government, but by society.”

For his part, Putin noted the “very good results” that Armenia-Russia economic cooperation has brought. “I wish you success, and hope that our relations will develop as positively as they have thus far,” he told Pashinyan.

The meeting was being closely watched for clues to the future of Armenia-Russia relations, which have been thrown into question as a result of Pashinyan's rise.

While he was leading the protests that swept him in to power, however, he softened those stances and emphasized that he did not intend to make any dramatic geopolitical shifts.

Nevertheless, the Kremlin clearly remained skeptical of Pashinyan's intentions. Ahead of the meeting, senior Putin aide Yuri Ushakov said that “some issues can naturally be taken up, some questions asked, taking into account Mr. Pashinyan’s well-known statements on cooperation in the EAEU, CSTO and so on.”

Pashinyan recently adopted a new explanation for his apparent change of heart on ties with Russia: his new job. “Now I'm prime minister, and I'm not acting as a member of any faction or party,” he said in an interview with Russia-24 ahead of the Sochi summit. “Now I represent the Armenian people and a people's movement, which has not taken up any geopolitical questions.”

Nevertheless, he did reiterate his skepticism about the agreements that Armenia has gotten itself into with Russia and Moscow's other partners. He noted a long-standing concern in Armenia about the CSTO and exactly how it would intervene on Armenia's behalf in case war broke out with Azerbaijan.

“When I was in the opposition, an MP, I never heard from the government and the authorities any sort of concrete answers to these questions,” Pashinyan said in the Russia-24 interview. “I think it would be useful to make this clear and specify our mutual obligations – Armenia to its partners and vice versa – in specific situations.”

While many in Russia remain skeptical of Armenia's new leadership, the Kremlin appears to be trying to tamp down any public criticism of Pashinyan. Also ahead of the Sochi meeting, a spokesman for the Russian state oil company Rosneft apologized for insulting Armenia.

In a radio interview shortly after Pashinyan took office, Rosneft spokesman Mikhail Leontyev said that “Armenia was a burden for Russia from the very beginning,” and said that if Pashinyan wanted Armenia to go its own way, “it would be easier for us.”

The comments were widely condemned in Armenia, and the Kremlin took pains to distance itself from them.

On May 13, Leontyev said that he had apologized for those comments. “I sent a letter [to Pashinyan] with an apology, because I realize that some of my statements were not entirely correct and excessively harsh, and that no differences of opinion justify rudeness and harshness,” he told RIA Novosti.