The unprecedentedly hardline rhetoric comes amid fitful efforts by Armenia and Azerbaijan to peacefully resolve their conflict over Karabakh. 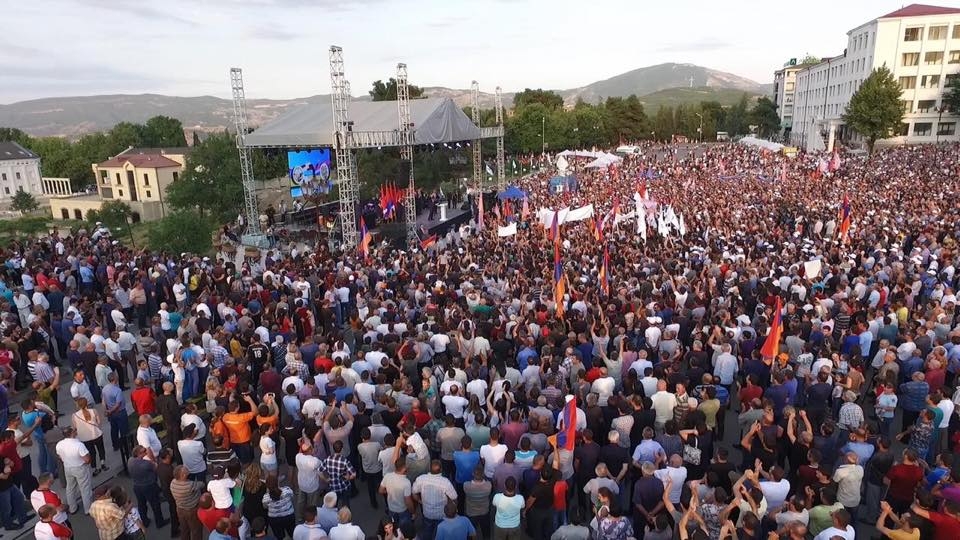 “Artsakh is Armenia, and that’s it,” Pashinyan said during his hour-long August 5 speech in Stepanakert, the de facto capital of Nagorno-Karabakh. (Artsakh is the Armenian word for Karabakh.) The prime minister also repeatedly led the crowd in chants of “miatsum,” or “unification,” the nationalist slogan that gained popularity in the 1980s and 90s as Armenians fought for Karabakh to break away from Azerbaijan.

While Pashinyan has never given any indication that he intends to cede to Azerbaijan any of the territory Armenia now controls, this most recent statement was still seen both among Armenians and Azerbaijanis as a step beyond his previous rhetoric.

“Pashinyan’s position on the resolution of the Karabakh conflict is in fact much more radical and intransigent than the approach of the leader of the opposition [sic] Robert Kocharyan,” wrote Haqqin, an Azerbaijani news site connected to the country’s security services. Kocharyan “never gave such unhinged and categorical formulations about the future status of Nagorno-Karabakh … After today’s speech Pashinyan has crossed the Rubicon, leaving Azerbaijan no possibility for a peaceful resolution.”

Since Pashinyan came to power following street protests in Yerevan last year, the negotiation process between Armenia and Azerbaijan has seen new energy, which culminated in an unprecedented joint promise in January to “prepare the populations for peace.” But since then the process has appeared to lose a bit of steam and there has again been an uptick in violence along the front lines between the two sides.

Pashinyan has had a distant relationship with the leadership in Stepanakert, which was closely allied with the former regime in Armenia (led by many figures from Karabakh) that Pashinyan deposed. Political figures tied to the former Armenian authorities have regularly tried to paint Pashinyan as soft on Karabakh.

The tension spiked earlier this summer when the Karabakh de facto leader Bako Sahakyan posted bail for Kocharyan, a former president of Armenia and Pashinyan’s archenemy. In an extraordinary attack, Pashinyan responded by accusing the leadership in Stepanakert of conspiring against him.

The large crowd and enthusiastic response in Stepanakert suggested that Pashinyan has a broad level of support in Karabakh in spite of his differences with the political leadership. “The rally was a huge triumph for Pashinyan and an utter humiliation for #Artsakh/#Karabakh's President Bako Sahakyan,” Stepanakert-based analyst and opposition politician Tigran Grigoryan, who attended the rally, wrote on Twitter. “Overall, the rally was a huge success for Pashinyan. It was a bit of a gamble to hold a rally in Stepanakert. It was thought that in Karabakh Pashinyan didn't have the level of support he had in mainland Armenia. However, his risk paid off and all the myths are finally busted.”

The claim about Karabakh was made in the context of a sweeping economic vision for Armenia and Karabakh that Pashinyan laid out, in which he called for the population of Armenia to grow to 5 million (it is now under 3 million) by 2050, for the GDP to grow 15-fold, and for the country to have an army among the top-20 most combat-ready in the world and an intelligence service in the top 10.

But what garnered the most attention was his one line on Karabakh being part of Armenia.

Armenia’s treatment of Karabakh’s status has traditionally been characterized by strategic ambiguity. Yerevan doesn’t officially recognize the Karabakh government as it continues to conduct negotiations with Azerbaijan to peacefully resolve the conflict; the largest sticking point in a resolution is how to determine the final status of Karabakh and formal recognition by Yerevan would likely be a fatal blow to the talks. (For its part, Baku regularly and categorically states that Karabakh will always be part of Azerbaijan.)

And at the same time that he has been feuding with the current de facto Karabakh leadership, Pashinyan has sought to raise Stepanakert’s profile and authority by insisting it be brought into the negotiations as a third party along with Armenia and Azerbaijan.

“What I don’t understand is how does Pashinyan reconcile his insistence on Nagorno-Karabakh’s return to the negotiating table because he can’t represent it and his simultaneous claims that it is Armenia and that’s it,” BBC Russian journalist (and former Eurasianet contributor) Grigor Atanesian wrote on Twitter. “If that’s a strategy to ‘outsmart’ Baku, it is not working.”