Pashinyan celebrates victory and declares “dictatorship of law and justice”

Following his landslide reelection, Armenia’s incumbent prime minister held a celebratory rally to declare an end to the country’s political crisis. His opponents may have other ideas. 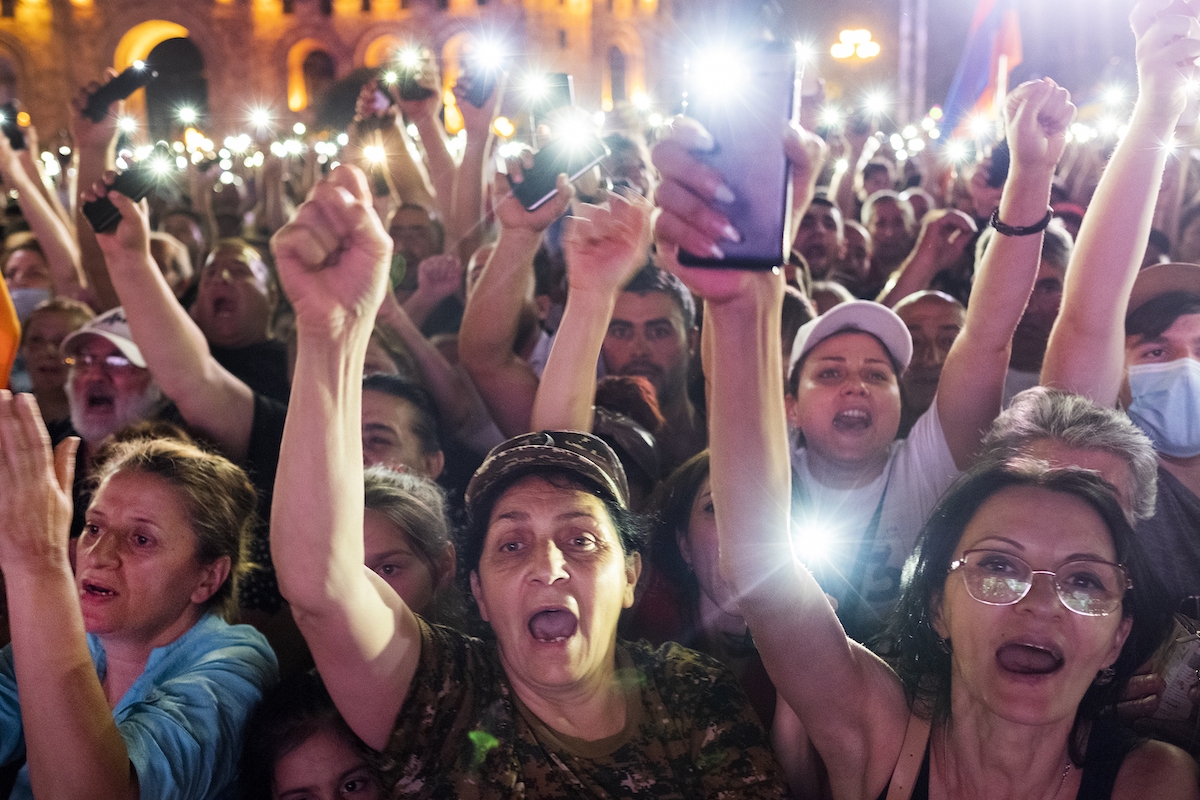 If anyone was expecting Armenian Prime Minister Nikol Pashinyan to try to heal the country’s deep political polarization following his decisive win in the polls, his fiery victory rally left them with few such illusions.

Pashinyan convened a rally June 21 on Yerevan’s central Republic Square, the site of the demonstrations that first brought him to power in 2018’s “Velvet Revolution,” to celebrate his win the day before in parliamentary elections.

Even after crushing his main opponent and political archenemy, Robert Kocharyan, by a 54-21 margin, Pashinyan and his allies in his Civil Contract party kept up the confrontational rhetoric that characterized the pre-election campaign.

At a small ceremony during the rally, a woman who was presented as “a representative of the people” handed Pashinyan a small statue meant to depict a steel version of the country’s constitution. The theatrical gesture referred to Pashinyan’s campaign promise that, following reelection, he would replace the “velvet mandate” he received in 2018 with a “steel” one.

“With this mandate and with the will of the people, the dictatorship of law and justice is being established in Armenia from this very moment, from this very second,” Pashinyan told the crowd after taking the statue.

He suggested his new mandate would empower him to take a hard line against his political opponents. “We offer you the hand of unification but emphasize that this can in no way call into question our responsibility to the people to use the steel mandate and establish the dictatorship of law and justice in Armenia,” he said.

Pashinyan’s landslide win came following a protracted political crisis in Armenia since the defeat in last year’s war with Azerbaijan, which significantly weakened the once wildly popular prime minister. While the victory would seem to give Pashinyan renewed authority, Armenian society remains deeply polarized between those who oppose him – many call him a “traitor” – and those who hate the former regime represented by Kocharyan even more.

Pashinyan said that his victory represented the end of the crisis, but his opponents suggested they would continue to contest his rule.

The Kocharyan-led “Armenia” alliance announced that they do not recognize the results of the elections and intended to appeal to the Constitutional court to challenge them. The third-place “I Have Honor” bloc, which also is tied to the former regime that Pashinyan ousted in 2018, also said they disagreed with the results but stopped short of suggesting they would directly contest them.

“The results of these elections are not light in the end of the tunnel, but a darker obscurity,” the bloc said in a statement issued June 21.

At the rally, several of Pashinyan’s allies echoed his combative tone.

“The world of the past has collapsed,” said Hayk Konjoyan, a member of parliament from Civil Contract. “The world which was built on money, bullying, criminality, lawlessness, that world has collapsed. And all those who make futile efforts to rise from those ruins should realize as soon as possible that there is no way back to the past.”

Mkhitar Hayrapetyan, another re-elected MP, told the crowd: “Do you fully realize whom you defeated yesterday, what you won? You cut the head of a seven-headed dragon! And thus closed the page of dragons in Armenia.”

Another Pashinyan ally, Nazeli Baghdasaryan, called on all political forces for solidarity but also issued a warning: “We don’t have enemies in our country, let’s be united, but at the same time not allow any force to abuse our will and spirit.” Civil Contract's Chairman Suren Papikyan continued in the same vein: “There is a law and a constitution, and everyone is equal before the law – with all that entails.”