Pashinyan finishes out of the medals in Kazakhstan 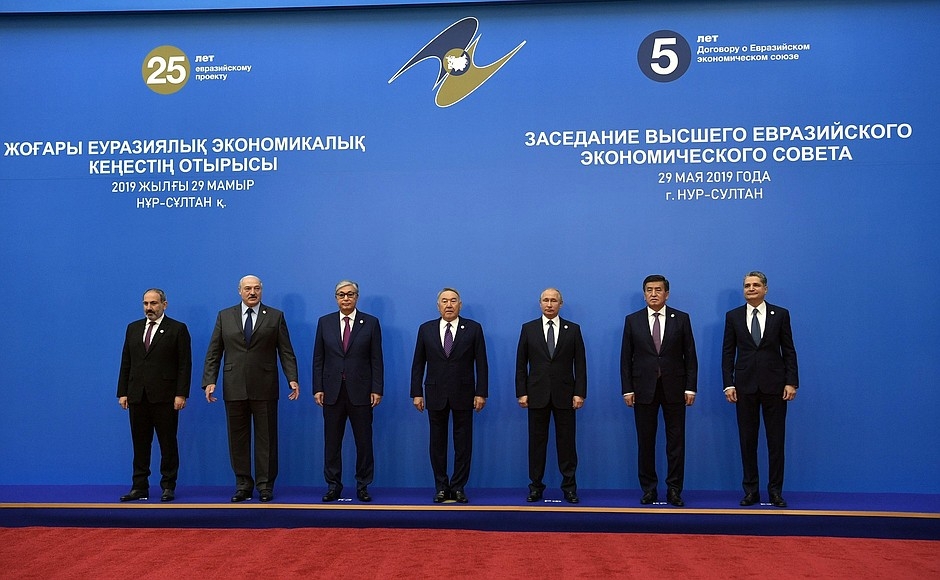 Armenian Prime Minister Nikol Pashinyan, far left, was at risk of being left on the sidelines at the recent Eurasian Economic Union summit in Kazakhstan. (photo: kremlin.ru)

At a summit of the Eurasian Economic Union in Kazakhstan, the visiting heads of state were awarded with medals and inducted into the “Order of The First President of The Republic of Kazakhstan Nursultan Nazarbayev.” Or all but one of them were, anyway.

Nazarbayev personally awarded the honors to the presidents of Russia, Belarus, and Kyrgyzstan – Vladimir Putin, Alexander Lukashenko, and Sooronbai Jeenbekov, respectively – on May 28 in the Kazakh capital, only recently renamed Nur-Sultan after the recently retired president.

Conspicuously left out of the ceremonial portion of the event was Armenian Prime Minister Nikol Pashinyan. Armenia is a member state of the EAEU along with Belarus, Kazakhstan, Kyrgyzstan, and Russia, and it wasn’t clear why he didn’t get honored. Pashinyan instead left the meeting just after the business portion was over for a meeting with Kazakhstan’s Armenian community.

Many in the Armenian media interpreted all this as a spat, which Pashinyan’s press secretary was quick to deny. “Nothing of the sort,” he told the state news agency Armenpress.” All the meetings on the agenda have taken place and are in process. At the moment Nikol Pashinyan and the Armenian businessmen living in Kazakhstan are having a meeting.”

Pashinyan himself later was asked why he wasn’t given a medal, and he suggested it was because he wasn’t around when the Eurasian Union was formed five years ago. "Wouldn't it be a little bit strange to give me a medal on the occasion of the fifth anniversary of the establishment of the Eurasian Economic Union?” he answered, eliding the fact that, while Putin and Lukashenko were in fact present at the Eurasian bloc’s creation, Jeenbekov was not and has only been in office about six months longer than Pashinyan.

As a commentary on the website 1in.am put it: “Frankly speaking, Pashinyan's answer is not convincing, because first of all the awards were not dedicated to the anniversary, and in this case it wasn’t about the leaders, but the country.”

The snub, if it was one, was all the more unkind given that Armenia is the current holder of the rotating chairmanship of the EAEU. And at the meeting, Pashinyan expressed a keen interest in expanding the activities of the bloc.

At his speech at the event, he mentioned that on a recent trip to China, “the cooperation agreement with the Eurasian Economic Union was mentioned as one of the key factors contributing to the growth of economic cooperation between our two countries.” He added that he plans to visit Singapore in July and that he will “do everything possible” to advance a pending agreement between Singapore and the EAEU, and that he wants to expand the bloc’s cooperation with Serbia, Egypt, Israel and India, as well.

Armenia’s ties with Kazakhstan have been a bit frosty, due in part to Astana/Nur-Sultan’s sympathies for Armenia’s foe, Azerbaijan. But publicly, Nazarbayev praised ties with Yerevan. “Kazakhstan and Armenia have never had any problems and have good relations,” he said, adding he hoped trade between the two sides would grow.

On top of the medal issue, Pashinyan’s visit to Kazakhstan was marred by a meeting with Putin that didn’t take place. On April 19, the speaker of the Russian senate, Valentina Matvienko said the two would meet bilaterally at this event, and Pashinyan later confirmed it. But the meeting didn’t happen in the end, for reasons never explained.

A senior Duma member, Leonid Kalashnikov, cautioned that the failure to hold the meeting shouldn’t be interpreted as “an act of hostility” and that the two would meet again soon. “There can be different reasons, but it was probably just circumstances,” he told the news site Rusarminfo. “There is no need to seek conspiratorial motives.”

But Armenia’s ties with its strategic ally, Russia, also have been strained since Pashinyan’s rise to power and appointment of a team with many pro-Western members.

A senior member of the former ruling Republican Party, Armen Ashotyan, said the failed meeting was more evidence of an “amateur approach” of the new authorities. “The Armenian people are being misled, I’m sorry, but they are being treated like donkeys,” or fools, he wrote on Facebook.

In any case, the next EAEU summit is scheduled for October 1 in Yerevan.