Moscow appears cool to the proposal. Meanwhile, Armenia to lead the CSTO while Azerbaijan drills with NATO, and more Armenian soldiers are convicted in Baku. This week’s Post-War Report. 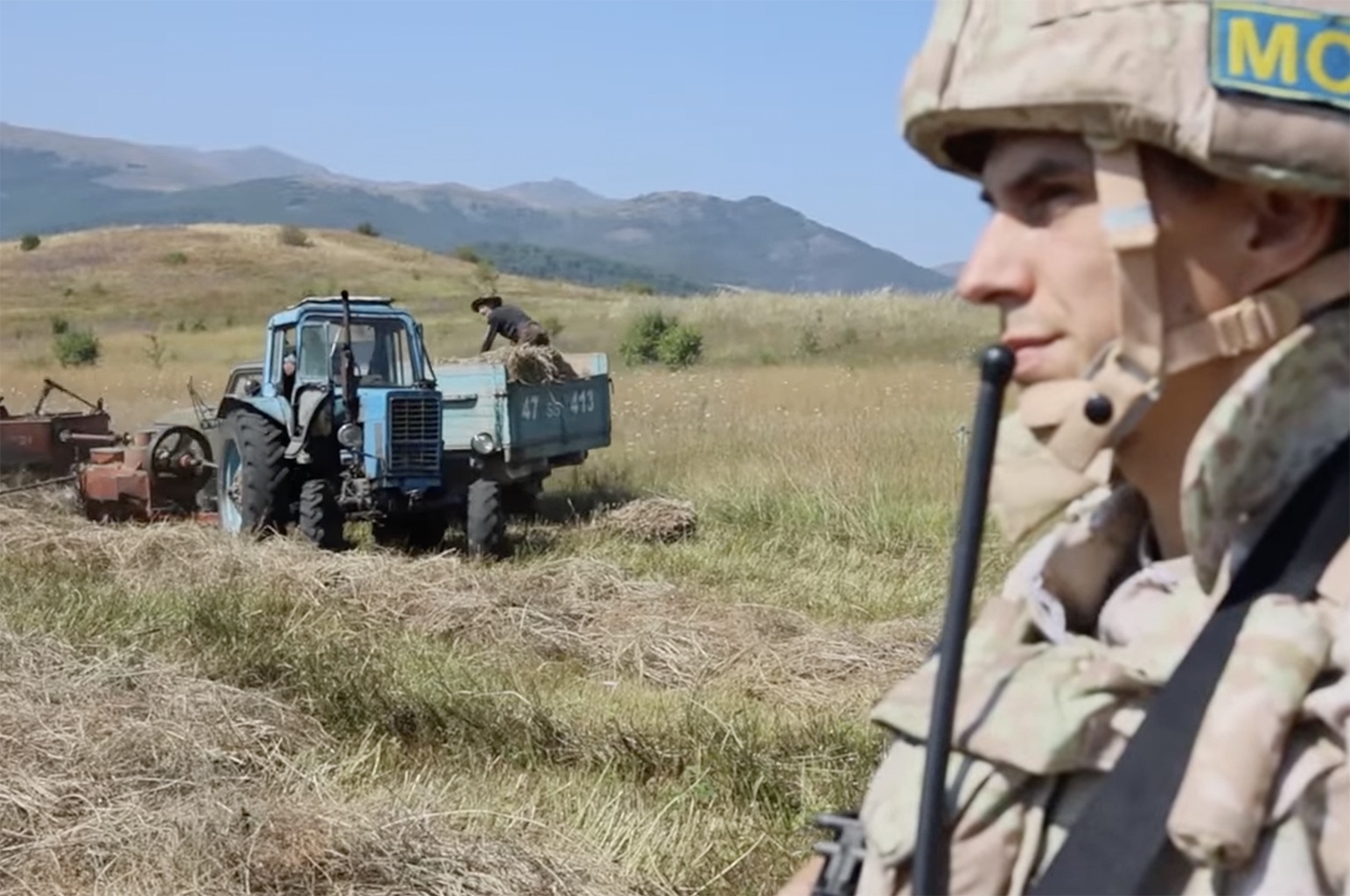 Armenia is seeking to deploy Russian border guards along its entire border with Azerbaijan as tensions and violence between the two countries continue to fester.

“This would allow the possibility of conducting delimitation and demarcation [of the two countries’ border] without the risk of armed clashes,” Prime Minister Nikol Pashinyan said at a July 29 cabinet meeting.

Russian border guards already patrol the southernmost part of the border, along Armenia’s Syunik province, and there have been talks about expanding that effort into the next Armenian province to the north, Gegharkunik. (The governor of Gegharkunik said July 29, however, that he didn’t know whether those discussions had advanced.) 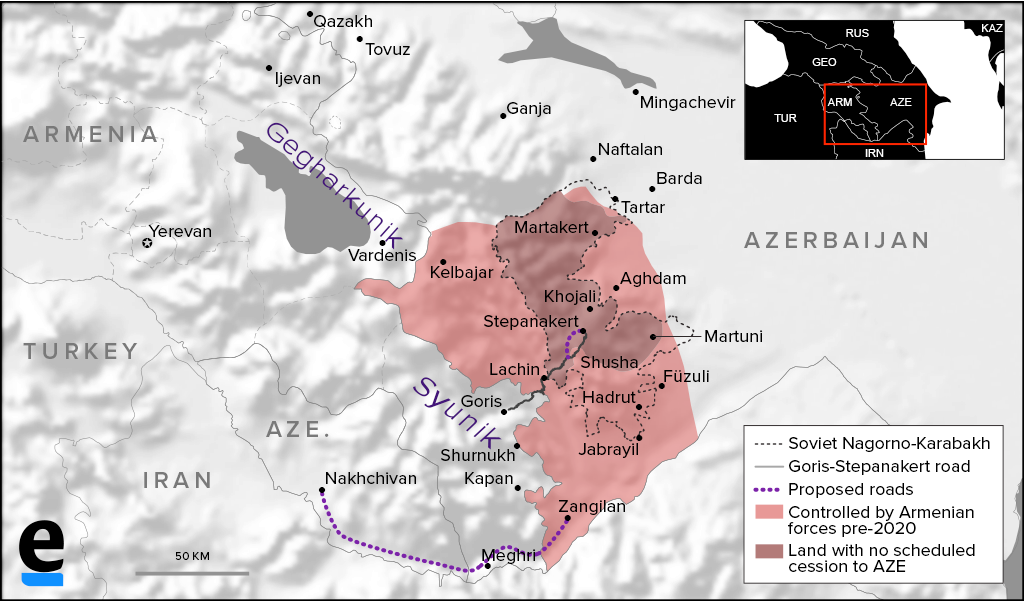 Pashinyan’s proposal comes as Azerbaijan continues to push the advantage it won in last year’s war, steadily ratcheting up pressure in the hopes that it will force Yerevan into a final resolution of the conflict on terms favorable to Baku. In particular, Baku is seeking the handover of the remaining parts of Karabakh that are still under Armenian control, a demand Yerevan finds unacceptable.

“The situation along the Armenia-Azerbaijan border is not stabilizing, regardless of the efforts of the Armenian government and the international community,” Pashinyan said. “Azerbaijan is continuing its aggressive rhetoric and actions.”

The military pressure has steadily been increasing, as this week saw the single deadliest fighting since the two sides signed a ceasefire statement in November. On July 28, three Armenian soldiers were killed in a shootout between Gegharkunik and neighboring Kelbajar in Azerbaijan, in fighting that reportedly involved heavy artillery and tank fire. On July 23, an Azerbaijani soldier was killed in the same region.

Following the heavy fighting, Russia mediated a return to the ceasefire, but shooting has continued intermittently since then. Armenia reported on July 30 that it had intercepted two Azerbaijani drones flying over Gegharkunik, but Azerbaijan denied the reports.

The deteriorating security situation continues to demand attention from foreign actors. The U.S. State Department called on the two sides to immediately stop the fighting and to return to negotiations under the auspices of the Minsk Group of the OSCE. “[O]nly a comprehensive resolution that addresses all outstanding issues can normalize relations between the two countries and allow the people of the region to live together peacefully,” department spokesman Ned Price said in the July 28 statement.

Iran’s foreign ministry similarly called on “both sides” to stop shooting, and offered its own mediation services.

Pashinyan’s request for an expanded Russian border guard presence, though, seemed to fall on deaf ears. Asked about the proposal, Kremlin spokesperson Dmitriy Peskov dodged the question. “Contacts with Yerevan are continuing, we have nothing more to add,” he said.

Russian military analyst Pavel Felgenauer said that Moscow was unlikely to be interested. “Armenia wants to draw Russia into the conflict because it lost the war, it has no more strength, no more soldiers, it’s unable to rebuild its armed forces,” he told the news outlet Caucasian Knot. “Armenia is counting on Russia, but Russia has other priorities: Ukraine, Afghanistan, NATO. […] Russia doesn’t have extra armed forces to send fighters to help Armenia.”

Some form of international help could be coming Armenia’s way: Starting in September, Armenia will assume the chairmanship of the Collective Security Treaty Organization (CSTO), the Russia-led post-Soviet mutual defense bloc. Yerevan has been appealing to the CSTO as Azerbaijani forces have crossed the (as yet not formally delineated) border between the two countries. Armenia says that amounts to a foreign invasion of the type that is supposed to trigger the CSTO’s collective defense provisions, though the organization’s leadership disagrees.

Ruben Rubinyan, the head of the Armenian parliament’s foreign affairs committee, said Armenia will assume the chairmanship of the CSTO (currently held by Tajikistan) on September 16. Will that help Armenia get anything more out of the CSTO than it has been able to so far? Rubinyan was noncommittal.

“The international community must respond appropriately to these actions of Azerbaijan, which is trying to blow up regional stability. […] There is a process under way in the CSTO, and we will continue to make use of the tools available to us,” Rubinyan told Armenian public radio. “We think that the CSTO should respond accordingly to these situations, because it is the CSTO obligation.”

Meanwhile, another international military bloc is holding exercises close by: NATO kicked off its regular Agile Spirit drills in neighboring Georgia on July 26. Armenia and Azerbaijan both have on-again-off-again relations with NATO and its multilateral exercises, and this time Azerbaijan is taking part while Armenia is not. It’s not too surprising why: NATO member Turkey, which provided substantial support to Azerbaijan in last year’s war, will be there.

The Kremlin’s Peskov was asked about Azerbaijan’s participation, and his disapproval was clear. “We value our relations with Azerbaijan,” he said, before adding that “it’s important [for Moscow] that these exercises do not suppose any veiled activities with respect to our country […] NATO sets the scenarios for these exercises and the alliance does not hide who is the enemy in them.”

Military pressure is not the only lever Azerbaijan is using against Armenia. A Baku court on July 29 convicted a group of Armenian soldiers who had crossed into Azerbaijani-held territory in Karabakh after the ceasefire was agreed last fall. The 13 soldiers were sentenced to six years in prison on charges of illegal border crossing and weapons possession. Another group of 13 soldiers was convicted for the same crimes and received the same terms a week earlier.

The sentences are likely merely a bargaining chip. Azerbaijan has been trying about 60 such soldiers in groups, and some of them have already been sent back to Armenia in exchange for maps of land mines that Armenia laid in the territories Azerbaijan retook during the war.

The prosecutions amount to a breach of the Geneva Conventions on war crimes, said Giorgi Gogia, the associate director for Europe and Central Asia for Human Rights Watch.