The prime minister has long had a confrontational attitude toward critical press. Now he has escalated the fight by involving the security services and arresting the operator of a satirical site. 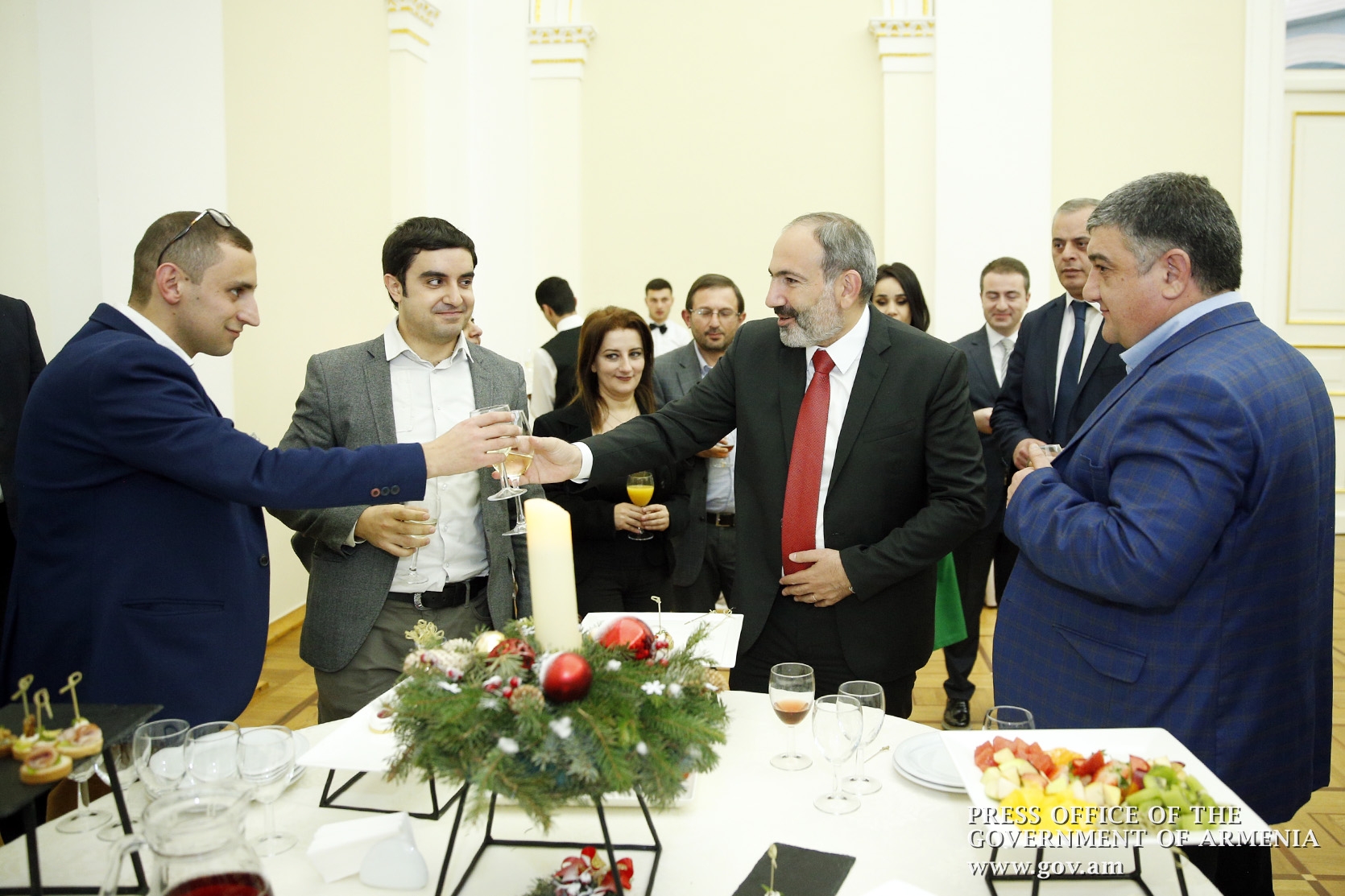 Armenian Prime Minister Nikol Pashinyan toasts with journalists at a December reception for members of the press. He has now launched a campaign against "fake news." (source: primeminister.am)

Armenian Prime Minister Nikol Pashinyan has ordered the country’s security services to crack down on “fake news.” One operator of a satirical website has already been arrested, drawing criticism from free speech advocates.

At an April 4 government session, Pashinyan floated the possibility that the price rises could be a “provocation” by gas station owners, but then turned his attention to news reports that connected the price increase to recent technical changes in how gas is sold in Armenia.

“Freedom of speech and information is guaranteed in Armenia. But if some criminal circles spend millions on manipulating public opinion in social media, in the media, then this is a question of national security,” he said. He addressed the head of the National Security Service (NSS), Artur Vanetsyan: “I hope that your service will be able to achieve concrete results on this issue. In social media there are even fakes, operating under the flag of the revolution, with calls to violence. Such manipulations should get a very strong counterstrike. I think that the legislation of the Republic of Armenia offers such a possibility.”

Vanetsyan responded quickly: The next day, he announced that the author of an anti-Pashinyan satirical Facebook page had been arrested. He said the site was targeted for “sowing racial, religious and ethnic hatred” but did not provide details. The site was taken down by Facebook for some time but was back up on April 9; it hadn’t been updated since a post on April 4 mocking Pashinyan’s attack on fake news.

“St. Nikol Pashinyan has ordered to immediately eliminate the fake army which has billions of dollars from the former regime and to try to manipulate today's failures and present them as a victory,” the post said. “This government has come to destroy Armenia and pave the way for the great Turan,” it concluded, referring to the mythical pan-Turkic realm.

The NSS has not subsequently reported on the fate of the Facebook page operator. A message from Eurasianet to the page seeking comment was not answered.

With the heavy-handed reaction, Pashinyan waded into the difficult debate – taking place not only in Armenia but around the world – about what really constitutes fake news and what to do about it.

Samvel Martirosyan, an information security expert, said that fake news is indeed a problem in Armenia. “But you cannot fight against such fake attacks by labeling everyone left and right ‘fake,’” he wrote in an analysis for the website media.am. “As to the NSS’s involvement in this issue, I think the NSS should be the last one to fight against fakes, but never the first.”

Making arrests based on verbal instructions from the prime minister “threatens the freedom of speech,” said Shushan Doydoyan, head of the Freedom of Information Center of Armenia, in an interview with news website Caucasian Knot. “Any regulation should be determined by law. Moreover, the NSS’s authority does not include control over the internet, much less punishments for distributing fake news.”

Pashinyan has repeatedly criticized critical media, occasionally singling out reports he doesn’t like on his Facebook page. In September, police raided the offices of a news website in the mistaken belief that it was the source of a damaging leak of phone conversations involving Vanetsyan and Pashinyan.

In January, speaking at the World Economic Forum at Davos, Pashinyan said that Armenia’s free media environment “opens a big field for fake news and may affect the image both in our country and in the world, but if we are sincere, I do not know what to do in this situation. If someone knows what to do, it’s good news for all of us.”