Pashinyan takes “Velvet Revolution” on the road to L.A.

The Armenian PM was enthusiastically received in California in spite of Azerbaijani government attempts to rain on his parade. 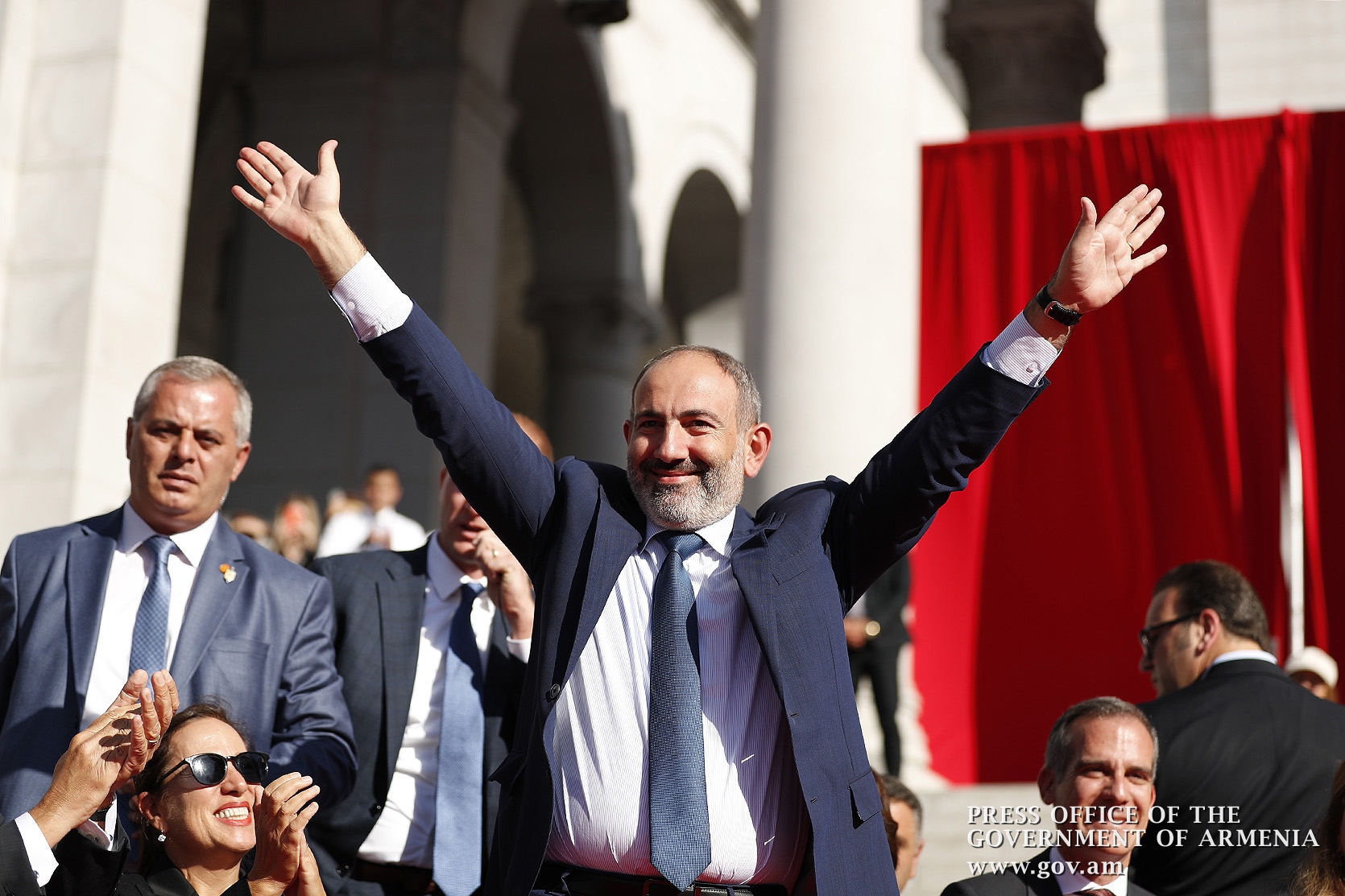 Armenian Prime Minister Nikol Pashinyan addresses a crowd of about 10,000 in Los Angeles. Diaspora Armenians have been cheered by the rise of Pashinyan, who has vowed to eradicate corruption in the country. (photo: primeminister.am)

Armenian Prime Minister Nikol Pashinyan took his rock-star popularity to Los Angeles, home of the United States’s largest Armenian-American population, in an unprecedented rally for an Armenian leader in the U.S.

An estimated 10,000 people turned out to see Pashinyan speak from the steps of Los Angeles city hall on September 22, where he called on Armenian-Americans to visit and invest in Armenia and spend “a month or two” per year living in the country. “The most important issue is, in a conceptual and ideological sense, to do away with the Diaspora-Armenia borders,” he said in the speech, which he delivered in Eastern Armenian.

Armenian-Americans have been cheered by Pashinyan’s rise in Armenia, said Rupen Janbazian, editor of H-Pem, an English-language magazine aimed at diaspora Armenians.

“For the most part, he’s perceived as a stand-up guy after years of corruption and, for lack of a better term, tyranny,” Janbazian told Eurasianet.

“Pashinyan’s long-awaited visit to our community will foster better relations with the Homeland and will bring us closer together,” wrote one Armenian-American newspaper, Massis Post, ahead of the visit. “The anxieties of the past have been replaced by optimism. There is enthusiasm everywhere and a willingness to communicate with the Homeland and contribute to its economic growth.”

Before Pashinyan’s rise to power Armenian-Americans had little enthusiasm for Armenian politicians, with diaspora groups largely looking the other way at the corrupt, stagnant domestic politics in Yerevan and instead focusing on international issues: formal recognition of the Armenian genocide and support for Armenia in its ongoing conflict with Azerbaijan. So Pashinyan’s ability to attract a large, enthusiastic crowd in Los Angeles was itself a sign of what has changed.

“Overall a classic Nikol speech adjusted for location, high on decibels and emotions, low on information,” tweeted Emil Sanamyan, analyst at the Institute of Armenian Studies at the University of Southern California. “But a big change from the sort of interaction Armenian communities are used to having with past Armenian leaders.”

Since taking power last year, Pashinyan has made a priority of attracting the massive Armenian global diaspora to become more active in Armenia. And diaspora Armenians, particularly in North America, have been enthusiastic about Pashinyan’s vows to eradicate the deep corruption that has discouraged them in the past, Janbazian said.

“For years, Armenia has been a corrupt place where we could visit as tourists, but repatriating or establishing businesses or any real ties with the country has been difficult because of corruption,” Janbazian told Eurasianet. The “Velvet Revolution” led by Pashinyan, however, “really gave people hope that Armenia may be a country where [we could] open a business, spend our summers, repatriate.”

The Los Angeles area has more than 200,000 residents of Armenian origin and local officials are deeply solicitous of the ethnic Armenian vote. A series of city, county, state and other officials spoke at the rally before Pashinyan appeared, while the crowd impatiently chanted “Nikol, Nikol!”

Los Angeles Mayor Eric Garcetti, one of the speakers, also alluded to the new opportunities Armenian-Americans now see in Armenia.

In environmentally conscious California, Pashinyan continued to be dogged by controversy over the planned Amulsar gold mine project. Promoters see the mine as a boon for workers and key source of foreign investment, but many Armenians worry that the damage it could inflict on the environment will outweigh any economic benefits.

Many at the rally carried signs protesting Amulsar, and Pashinyan referred to the debate in his speech: “I disagree with the notion that a government should make decisions based on [which side] applies the most pressure… on this issue we must be honest and follow the truth,” he said.

Azerbaijan’s government tried to dampen enthusiasm around the event, but without much success. In an August 19 letter, the Azerbaijani consul general in Los Angeles, Nazimi Aghayev, asked city authorities “not to allow” Pashinyan to “misuse” his appearance to justify Armenian control over Nagorno-Karabakh. Karabakh is a territory internationally recognized as part of Azerbaijan but controlled by ethnic-Armenian forces since the two sides fought a war in the early 1990s.

Aghayev provided Eurasianet with a copy of the letter.

In response, City Council member Paul Krekorian accused Aghayev of going “far beyond the bounds of propriety by actively attempting to meddle in the actions and decisions” of local officials “as we welcome a foreign dignitary as our guest.” He continued: “[E]ven worse, your letter urges the elected leaders of Los Angeles to violate the United States Constitution by censoring free expression.” Krekorian’s staff provided Eurasianet with a copy of his letter.

“[T]he City of Los Angeles has consistently and proudly stood in support of the people of Artsakh, and it has clearly and directly recognized and supported the sovereignty and independence of the free and democratic Republic of Artsakh,” Krekorian’s letter continued. (Artsakh is the Armenian word for Karabakh. Los Angeles, like a number of other jurisdictions in the U.S., has passed a resolution recognizing Karabakh’s independence, though no nation, including the U.S. or Armenia, has formally recognized Karabakh.)

In an email to Eurasianet, Aghayev argued that “freedom of speech would not necessarily apply to foreign heads of state and government making speeches on U.S. soil, especially in public open spaces. They should be respectful of the U.S. and its policies in such public rallies in the U.S., which I do not expect PM Pashinyan to be, hence the concern.”

Legal scholars have generally agreed that U.S. guarantees of freedom of speech do in fact apply to foreigners.

In the end, Pashinyan did not mention Azerbaijan in his speech. He did thank Garcetti for Los Angeles’s recognition of Karabakh.

An airplane carrying a banner reading “Karabakh is Azerbaijan! End the Occupation!” flew over the area while Pashinyan was speaking, and trucks carried billboards presenting Azerbaijan’s interpretation of the conflict in Karabakh around nearby streets. It wasn’t immediately clear who had arranged for the displays, but a video documenting them was shared by Azerbaijani diplomats.

Truth on #Karabakh in the skies and streets of #LosAngeles. This is how Los Angeles "welcomed" Armenia's PM Pashinyan.

Truth on #Karabakh in the skies and streets of #LosAngeles.
This is how Los Angeles "welcomed" Armenia's PM Pashinyan.

Posted by Consulate General of Azerbaijan in Los Angeles on Sunday, September 22, 2019