Peace? Not so fast, many Armenians and Azerbaijanis say

News about potential progress in peace negotiations was greeted largely negatively among Armenians and Azerbaijanis. 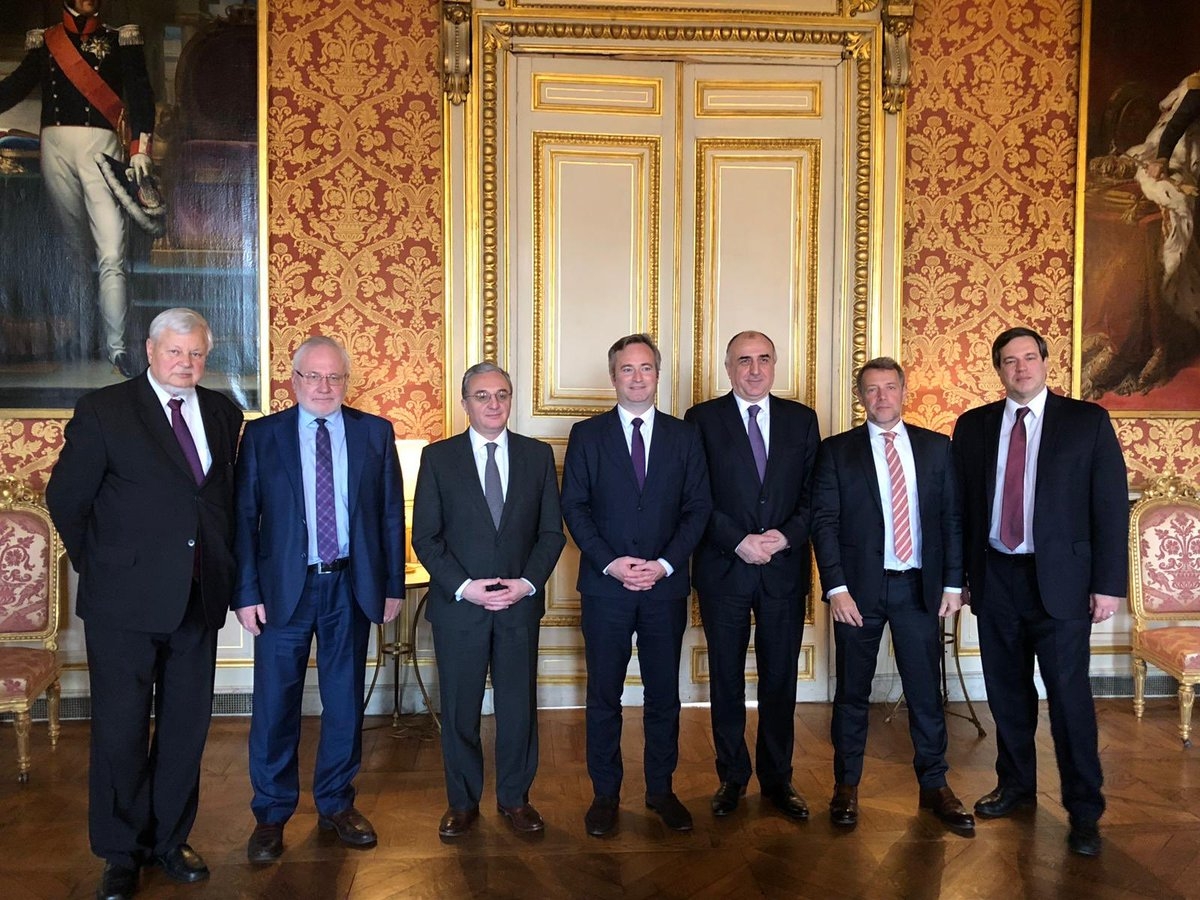 The foreign ministers of Armenia and Azerbaijan, along with international mediators, met in Paris on January 16. The optimistic result from the meeting was greeted suspiciously by many in the region. (photo: MFA Azerbaijan)

News that Armenia and Azerbaijan had made a small step toward peace was welcomed by observers as a rare sign of hope in the conflict between the two countries. But many leading voices in the region reacted negatively to the news, vividly illustrating the hardened attitudes toward the sorts of compromises that would be necessary to achieve a real peace deal.

After the foreign ministers of the two countries met in Paris on January 16, they issued a statement saying that they “agreed upon the necessity of taking concrete measures to prepare the populations for peace.” Many welcomed the gesture, the most positive formulation by the two sides in years after a long period of stagnation in peace talks. United Nations Secretary-General Antonio Guterres hailed the statement, and “particularly welcomed the Ministers’ agreement on the need to take concrete measures to prepare the populations for peace.”

But the prospect of a vague “peace” appeared threatening to many Armenians who feared that it would require territorial concessions that are unacceptable to them. And many Azerbaijanis, for their part, saw it as a naïve capitulation to Armenians who would only use the illusion of diplomatic progress to continue to prolong their occupation of Azerbaijani lands.

In both Armenia and Azerbaijan, the governments did little to immediately explain the statement to their skeptical citizens, and their respective foreign policy leadership remained mostly silent. (Neither the Armenian nor Azerbaijani foreign ministry press offices responded to questions from Eurasianet by the time this piece was posted; it will be updated as they do.)

In the absence of public support for the ministers’ statement, the reactions to it were largely negative.

Artak Beglaryan, the human rights ombudsman for the de facto government in Nagorno Karabakh, greeted the Paris announcement with a skeptical tweet, asking what steps Azerbaijan planned to take to prepare for peace. (The Armenia-backed Karabakh authorities are not part of the negotiations, though Armenian Prime Minister Nikol Pashinyan has vowed to bring them in to the process.)

Armen Ashotyan, a senior member of the formerly ruling Republican Party of Armenia, wrote a Facebook post calling the statement “incomprehensibly optimistic” and demanded that the government explain it in greater detail.

The official reactions to the news in Azerbaijan were more muted and more mixed.

The newly appointed head of Azerbaijan’s association for people displaced from Nagorno-Karabakh, Tural Ganjaliyev, welcomed the ministers’ statement. “The Azerbaijani community of the Nagorno-Karabakh region of the Republic of Azerbaijan hopes for a speedy peaceful settlement of the conflict and ensuring co-existence with the Armenian community," he said in a press release.

The website Haqqin, connected to Azerbaijan’s security services, ran an interview with a Russian analyst on the announcement that expressed skepticism about any potential deal. “Azerbaijan can hardly expect any positive changes in the peace process, much less the return of lands,” said the analyst, Grigoriy Trofimchuk.

But another pro-government website, Trend, ran an article with a series of foreign analysts who expressed optimism over the announcement.

In an interview published January 18, Azerbaijan’s chief of general staff, Necmetdin Sadikov, expressed skepticism over negotiations. “The president [of Azerbaijan] has given the new prime minister of Armenia the chance to think and to peacefully free the occupied territories of Azerbaijan,” Sadikov said in the interview, which didn’t directly refer to the foreign ministers’ announcement but which was interpreted in Baku as a reaction nevertheless. The Azerbaijani military, Sadikov added, “is ready to fulfill any command at the highest level of professionalism and to free the occupied territories. In Armenia, they should not think that they will be able to maintain the status quo in negotiations.”

On both sides, the lack of explanation of what sort of peace people should be prepared for led to speculations that tended toward the worst-case scenario for the respective sides.

“LAND FOR PAPER: Madrid Principles ask Armenians to trade land for paper,” tweeted the Armenian National Committee of America, an Armenian-American lobbying group, referring to the current framework for the negotiations, agreed by the two sides in Madrid in 2007. “THE DEAL: #Artsakh surrenders strategic/sovereign territory upfront, in exchange for vague, reversible, unenforceable #Azerbaijan @presidentaz Aliyev promises about Artsakh's future status. ANSWER: NO DEAL,” the tweet continued. (Artsakh is the Armenian word for Nagorno-Karabakh, the territory at the heart of the conflict.)

“For 25 years, we have been reading the same statements and explanations, while the occupation continues. If everything is as the Ministry of Foreign Affairs claims, and ‘discussions are going in a useful and positive direction,’ then why is nothing happening?” wrote Azerbaijani foreign policy commentator Elkhan Shahinoglu.

“The announcements are quite promising at first glance, that people should be prepared for peace,” said Azerbaijani foreign policy analyst Rauf Mikradirov, in an interview with RFE/RL. “That is, at first glance it supposes that there should be some sort of contours of peace, so that the people will have something to be ready for. If there are no contours of a peace agreement, then people have nothing to be prepared for.”