Perceptions of Persecution May Increase Uzbeks’ Desire for Revenge 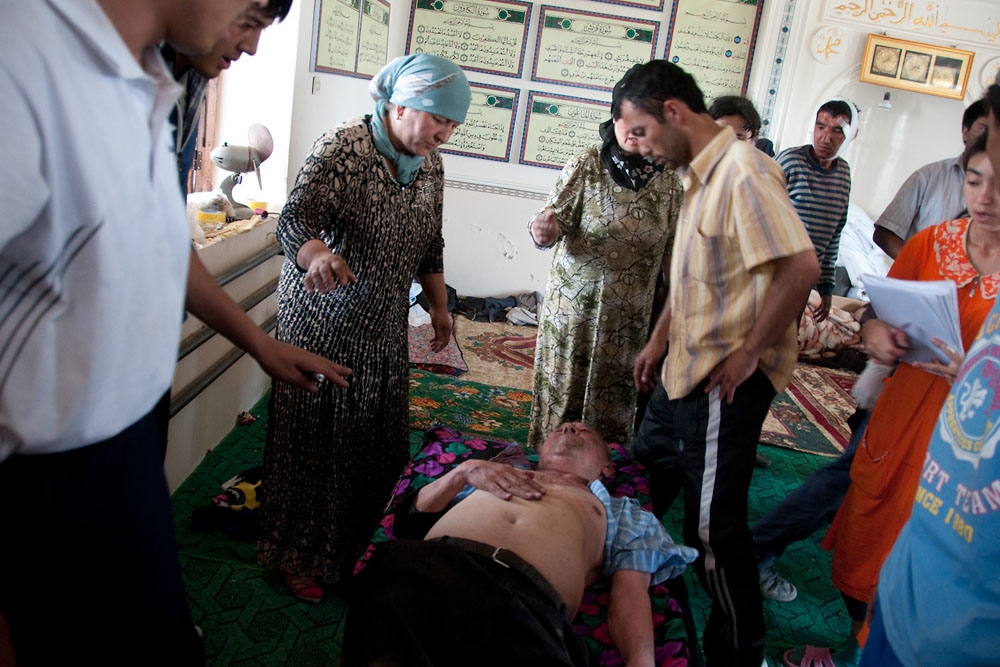 An Uzbek man is treated for injuries received during the violence in Osh. (Photo: Dalton Bennett)

A tenuous sense of stability seems to be returning to southern Kyrgyzstan, just weeks after the region experienced the worst bout of violence since independence. But, below the surface, Uzbeks are still seething, and some experts worry that prevailing conditions may represent only a temporary lull.

The surprisingly large turnout of Uzbeks in Kyrgyzstan’s June 27 constitutional referendum prompted provisional government leaders to sound an upbeat note about the process of reconciling the Kyrgyz and Uzbek communities in southern Kyrgyzstan, following five days of violence in mid-June that left hundreds dead and hundreds of thousands displaced. [For background see EurasiaNet’s archive].
Yet even though Uzbeks voted in higher-than-expected numbers, it doesn’t mean that they have forgotten the recent past. Observers note that many Uzbeks -- who appear to have suffered disproportionately in terms of both casualties and property damage – are thinking about revenge. These feelings are fueled in part by a widespread perception among Uzbeks that Kyrgyz provisional leaders are trying to cover-up the June 10-14 violence. Uzbeks also believe that authorities are conducting follow-up operations designed to neutralize the Uzbek community’s ability to exert influence over the political process. Under current circumstances, then, genuine reconciliation between Kyrgyz and Uzbeks would seem a long way off.

It could get worse before things get better, observers fear. The key, they say, is whether Uzbeks act on their desire for revenge by obtaining guns in large quantities. Because of the sensitive topic, many sources for this story requested anonymity, citing fears of violent reprisals.

Nazira Satyvaldiyeva, an expert in conflict resolution and head of the Eurasia Foundation’s Osh field office, suggested that lingering fear is prompting both Uzbeks and Kyrgyz to seek arms. “Both Kyrgyz and Uzbek friends tell me, ‘I am scared, I have to buy a gun. I have to defend my family and my house.’ Uzbeks and Kyrgyz, and even Russians, are saying this,” Satyvaldiyeva said.

“Now we have clear divisions between people with guns and those who want to continue living a peaceful life,” she continued. “I think the main thing we have now is that people are scared and fear brings more problems.”

To address the fear factor among Uzbeks, Satyvaldiyeva expressed support for an independent investigation into southern Kyrgyzstan’s violence. The provisional government has thus far resisted such an idea, saying it intends to conduct its own investigation. The problem is many Uzbeks doubt the provisional government is committed to uncovering the root causes of the violence.

To skeptical Uzbeks the arrests of some Uzbek leaders offers proof that the provisional government is not intent on justice, but instead is using the violence to enhance its political position.

In Jalal-Abad, Kyrgyz state television reported on June 26 that authorities are holding several Uzbek community leaders, including Ulugbek Abdusalomov, a newspaper editor, and Ozodbek Karamatov, the rector of the People’s Friendship University. The detainees are facing charges of fomenting inter-ethnic tension. They are associates of disgraced businessman Kadyrjan Batyrov, who provisional leaders accuse of inciting ethnic enmity in mid-May after calling for increased Uzbek language rights. Batyrov is believed to be hiding in Dubai. [For background see EurasiaNet’s archive].   Prosecutors have also targeted Uzbek leaders in Osh. On June 23, local news agencies reported, the Kyrgyz national security service (SNB) found guns and explosives in the house of Inomjon Abdurasulov, a former MP whose current whereabouts are unknown. The same day, the SNB detained Jalalitdin Salakhutdinov, the president of the Uzbek National Cultural Center, after reportedly finding weapons in his house. Salakhutdinov had called for any government investigating body to include ethnic Uzbeks.

Many Uzbeks believe that authorities planted weapons on the Uzbek suspects and that their arrests were politically motivated. The arrests are also fostering an impression that Uzbek are being set up to take the blame for the violence.

“Interethnic conflict continues because the investigating group from Bishkek is working in a one-sided manner. About 90 percent of the detainees are Uzbek; I didn’t see any Kyrgyz detainees,” said an Osh-based lawyer, speaking on condition of anonymity. “But, there were more Uzbeks dead. I am Kyrgyz myself, but I just want to be objective about that. That is very dangerous, that might provoke a second wave of clashes. … [Authorities] are just teasing Uzbeks now.”

Even today, behind the façade of relative peace, Kyrgyz and Uzbeks continue to disappear in and around Osh. According to Kyrgyz media reports, they mysteriously fail to return after leaving their homes.

Given the current tension, strife could flare again at any time, said Ajdar Kurtov, a Central Asia expert at the Russian Institute for Strategic Studies in Moscow. “Without [anyone facing] consequences, this conflict will not stop now; it was too bloody. […] I don’t know when it will flash again, but it will definitely continue,” Kurtov told EurasiaNet.org.

Violence will carry on because “the roots of the conflict are really deep,” said Kamoliddin Rabbimov, a political expert formerly of Tashkent’s Institute of Strategic Studies, now in exile in France. “Kyrgyzstan wants to have a civil society, but never allows national minorities to take part in it,” he added.

“Uzbeks will arm themselves now, because they understand that Uzbekistan will not get involved in this,” he added.

Kurtov echoed such sentiments. “The situation in Kyrgyzstan really allows ordinary citizens to get weapons and guns easily,” he said.