Because constructing mosques was rarely feasible for nomadic peoples like the Kazakhs and Kyrgyz, shrines were among their most important religious sites. 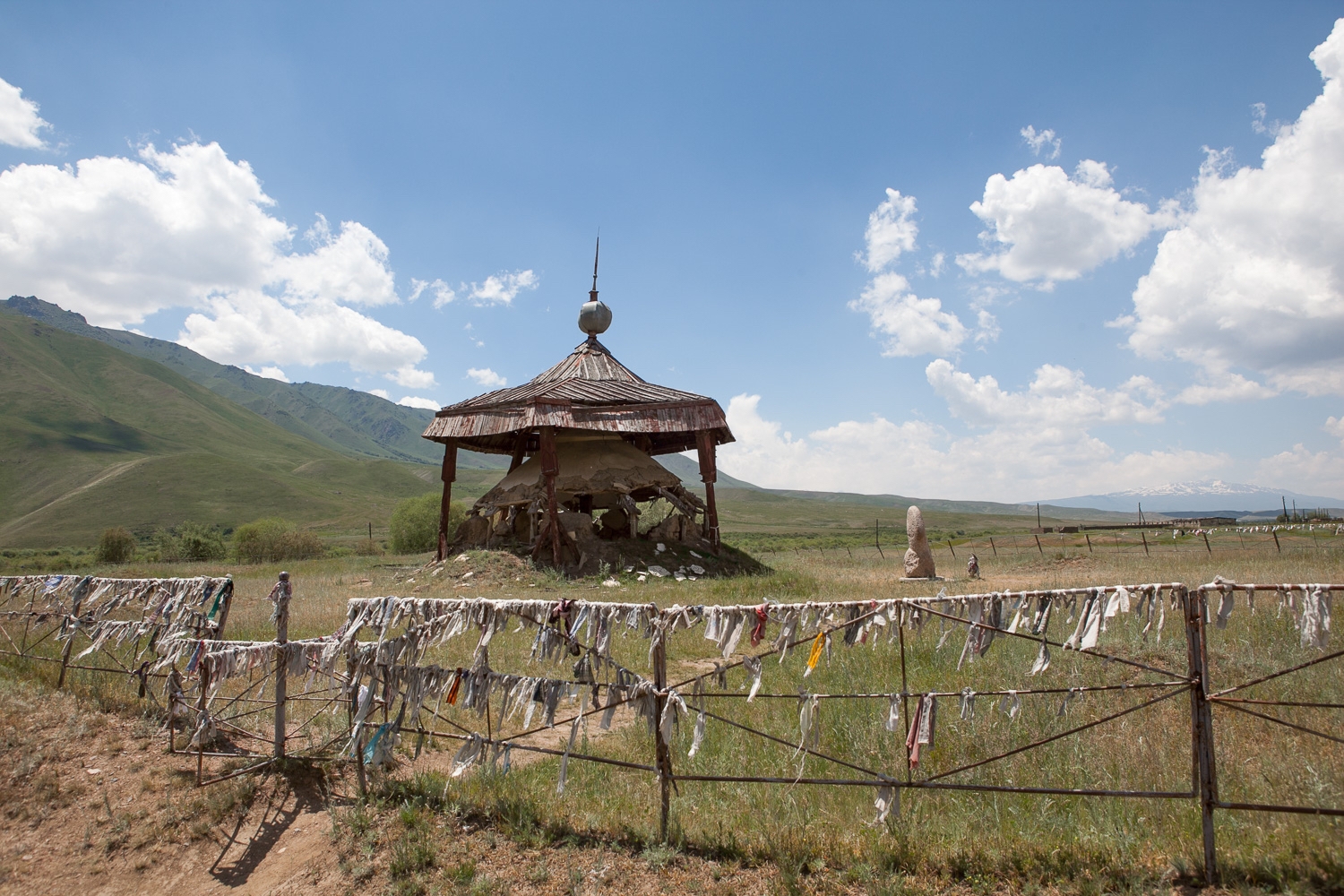 Władysław Bukowiński, a Polish priest born in what is now Ukraine, was imprisoned repeatedly by the Soviet secret police. Sentenced to ten years in the Gulag after World War II, Father Bukowiński chopped timbe­r in Chelyabinsk, dug coal in Karaganda and mined copper ore in Zhezkazgan before being released in central Kazakhstan in 1954.

Industrial Karaganda was at the heart of the vast network of camps known as Karlag, where many Poles, Lithuanians and Volga Germans, some of them Catholics, had been deported between 1939 and 1945. Father Bukowiński would look for those praying in cemeteries around the town and, identifying himself as a priest, celebrate mass secretly in homes with the curtains drawn. In 1955 he was given permission to return to Poland, but chose instead to remain, become a Soviet citizen and minister clandestinely to Karaganda’s Catholics. Apart from another stint in a labor camp, and a few short trips to Poland, he remained there until his death in 1974.

In September 2016 I attended Father Bukowiński’s beatification, Kazakhstan’s first. There was standing room only in the aisles of Karaganda’s new gothic cathedral, Our Lady of Fatima. The Polish ambassador, the local mufti, the Orthodox bishop and a representative of Kazakhstan’s Ministry of Culture sat while Cardinal Angelo Amato presided over the service. Hundreds of Catholics came from across the country, anxious to witness Kazakhstan’s entry into the vast, tangled sacred geography of the Catholic Church.

On the frontiers of Islam and Christianity

When we think of the sacred in Central Asia, we usually turn first to Islam, the religion of the overwhelming majority. The most prevalent Christian denomination is Russian Orthodoxy, which also has saints’ shrines, holy springs and sacred spaces across the region.

What Islam, Orthodoxy and Catholicism alike all share in Central Asia, however, is remoteness. Central Asia is thousands of miles from Mecca, Jerusalem and Rome. Thus, local sacred places play a particularly strong role for the faithful.

This is, of course, not new. Until the arrival of railways in the 19th century, only a tiny fraction of Central Asia’s Muslim population would have been able to undertake the hajj; the same would have been true of the Orthodox pilgrimage to Jerusalem. While, as Eileen Kane has shown, hajj traffic did increase significantly from the Russian Empire in the 1890s and early 1900s, Soviet rule brought this to an end. From the late 1920s until the 1970s Soviet Muslims were again largely cut off from the wider Islamic world, dependent on local resources and their own sense of the sacred.

One of the most characteristic literary traditions found in Central Asia is the Islamic biographical dictionary, which records the lives and writings of notable figures, saints and scholars, links their deeds to particular places, and records their place of burial. Tatar scholar Qurban ‘Ali Khalidi composed a particularly vivid example in Chuguchak, now just across the Chinese frontier, in the early 20th century. Alongside other popular works such as shrine guides and local histories, such texts affirm that the locales they describe – however remote from the centers of Islam – are still a full and important part of the Islamic world. Legends emerge associating local shrines with key figures from early Islamic history, such as the Prophet Muhammad’s cousin, Qusam ibn ‘Abbas, who is said to be buried in the Shah-i Zinda necropolis in Samarkand. For Central Asian Muslims, such sites took the place of unreachable Mecca or Medina as objects of pilgrimage.

Perhaps the most famous example is the great domed shrine to Khwaja Ahmad Yasavi at Turkestan, in southern Kazakhstan. There has been a shrine on this site since his death some 700 years ago, but the magnificent building we see today was erected by the conqueror Timur (Tamerlane), using craftsmen brought from Iran in the late 14th century. While the Yasavi Sufi order is now largely dormant, the shrine is still a major center of pilgrimage, and has particular importance for Kazakh Islam – it is sometimes known as the “second Mecca” for Kazakhs. Control of Turkestan and the other cities of the Syr-Darya valley was a key element of prestige and legitimacy for the Kazakh khans, many of whom are buried around the mausoleum, and it was the site of the enthronement of the last independent Kazakh khan, Ablai, in the mid-18th century. Many pilgrims also come from neighboring Uzbekistan and Kyrgyzstan to follow a pilgrim trail that begins in the small town of Sayram, near Shymkent. The first time I visited, I shared a minibus with the owner of a teahouse in the Ferghana Valley who had brought all his staff on pilgrimage.

The mainly Uzbek population of Sayram is fond of repeating the aphorism that “there is no counting the saints in Sayram.” The town is dotted with mosques and shrines, the most important of which are those to Yasavi’s mother and father. From here pilgrims proceed to Arystan-Bab, where the saint’s teacher is buried. The Yasavi mausoleum at Turkestan is the end of the route, and sees tens of thousands of pilgrims every year.

The Syr-Darya valley has a particularly dense profusion of shrines, most of them simple brick-domed structures dating from the 19th century, though often built on much older sites. The most striking architecturally is the Korkyt-Ata complex near Karmakchi, designed by the Kazakhstani architect Bek Ybraev and built in 1980. Standing on the supposed burial site of the legendary author of the Book of Dede Korkut, it is shaped like a kobyz, the stringed instrument he is said to have invented.

Christian sacred sites are fewer in southern Kazakhstan. But in Almaty, an Orthodox church first built in 1870 in one of the city’s original Cossack settlements houses the grave of a priest said to have been martyred by the Bolsheviks, and an icon painted on Mount Athos after the great earthquake of 1889.

Kyrgyzstan has an even denser sacred geography of both tombs and natural sites than Kazakhstan. Anthropologist Gulnara Aitpaeva of the Aigine Cultural Research Center has identified and mapped over 1,100 of them, most of which fit into a broadly Muslim form of spirituality. Kyrgyzstan is also home to an increasingly popular site of Christian pilgrimage on Lake Issyk-Kul, supposedly the last resting-place of the Apostle Matthew, and once the site of an Armenian monastery.

Since constructing mosques was rarely feasible for nomadic peoples, shrines were historically among the most important religious sites for the Kazakhs and Kyrgyz. Tombs were the only permanent buildings they constructed.

Many sacred places in Central Asia are not marked by any construction at all. The only indication they are special might be strips of cotton or plastic tied to trees, something you will see even at Shymbulak, the ski resort above Almaty. In northern Kazakhstan, near the village of Korneevka, there is a rocky outcrop rising out of the steppe whose sacredness is probably attributable to it being one of the few elevated spots in a vast plain. In the Soviet period this was rationalized as a belief that the mountain was radioactive owing to uranium deposits. Nearby is the village of Ozernoe, the most important site of Catholic pilgrimage in Kazakhstan. Founded in March 1941 by Poles deported there in 1936, it is believed to have been the site of a miracle, when at the end of a harsh winter the inhabitants were saved from starvation by the appearance of a thawed lake full of fish. The lake disappeared again after Stalin’s death, but has recently reappeared – though no-one seems sure what this might portend.

Uzbekistan’s settled oases are home to dozens of prominent shrines dating back hundreds of years and which continue to grow in number. Many of these are connected to the Naqshbandi Sufi order, such as that of Khwaja ‘Ubaydullah Ahrar in Samarkand, and Khwaja Ahmad Kasani Makhdum-i ‘Azam in the nearby village of Dahbid. The authorities have transformed the formerly modest tomb of the great 9th century jurist Imam al-Bukhari into a lavish memorial complex, sacralizing a spot which had not traditionally been an important place of pilgrimage. In 2016, Uzbek President Islam Karimov was buried behind the Hazrat-i Khizr mosque in Samarkand, a site already considered sacred. His grave has reportedly also become a site of pilgrimage for some Uzbeks.

The Ferghana Valley meanwhile has the famous shrines of Shah-i Mardan, which is associated with the Caliph Ali, and, above the city of Osh in Kyrgyzstan, Takht-i Sulaiman (the throne of Solomon). The Ismailis of the Pamir region in Tajikistan also have a flourishing shrine tradition.

The stories attached to pilgrimage sites, and the practices and beliefs of those who visit them, can seem fantastic to outsiders. But they give a landscape meaning. This is true all over the world. What makes Central Asia unusual, if not unique, is its mixture of Muslim and Christian pilgrimage sites, and the revival of shrine pilgrimage in the last 25 years. This is in stark contrast to much of the Muslim world, where Saudi Arabian money and propaganda have condemned such practices; many shrines have become targets for Islamic fundamentalist terrorists.

In Central Asia, by contrast, when Soviet-era restrictions on religious worship were lifted in the 1990s, people flocked to shrines, reviving and rediscovering religious practices and beliefs that had never entirely died out. They continue to do so today (despite occasional indications in Uzbekistan that authorities see shrines as “backward”). Central Asia’s sacred geography is one of the world’s richest. Hopefully its traditions of worship and pilgrimage are robust enough to resist the fanaticism seeking to destroy the dense layers of meaning that have been built up in its landscape over centuries.

Alexander Morrison is fellow and tutor in history at New College, Oxford. He is currently writing a history of the Russian conquest of Central Asia.