The war is not over, but it is clear that Armenia has no way to reverse Azerbaijan’s gains. 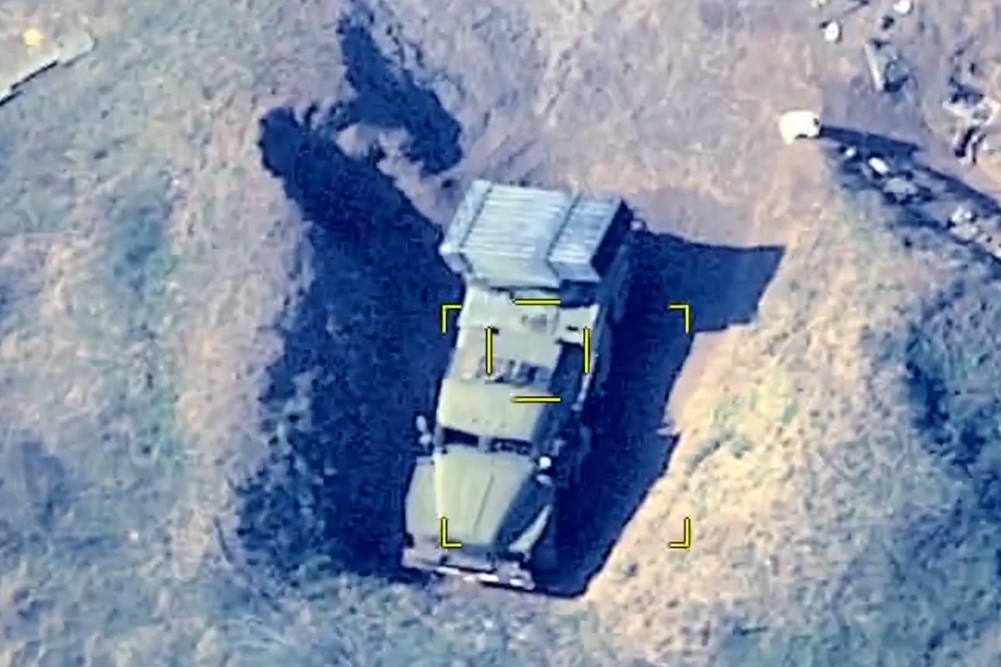 Four weeks into the war, Armenian forces in Nagorno-Karabakh face a military calamity. Azerbaijan’s drones and artillery have whittled them down, forcing a steady retreat. Unable to effectively counterattack or replace its losses, Armenia’s military has ceded considerable ground.

Although Azerbaijan’s early offensives did not result in significant gains, over the past two weeks they have captured a substantial amount of territory south of Stepanakert and along the Iranian border. Now Armenian forces are under threat of being cut off entirely as the Lachin corridor, linking Nagorno-Karabakh to Armenia proper, is within range of Azerbaijani artillery. It is possible that Azerbaijan will capture this critical supply line within days, or at least begin to interdict it. At the time of this writing Armenian forces are trying to stabilize the battlefield and repel further Azerbaijani advances towards Lachin. The battle line is seesawing as fighting intensifies in this area.

Having seized Jabrayil, Hadrut and Fizuli, Azerbaijan’s military has advanced west towards the Hakari river valley and turned north. The war is not over, but it is clear that Armenia has no way to reverse such gains, or reconstitute its substantial losses; digging in will place its forces under siege. Consequently, Baku can already claim a significant political victory based on battlefield performance and territory brought back under its control, though there is no sign it intends to stop its advance.

The military balance has long favored Azerbaijan, which holds qualitative and quantitative superiority over Armenia. For decades, Baku has poured money from energy exports into a much more modernized military, buying a host of capabilities from Russia, Turkey, and Israel.

Armenian forces’ were unprepared for armed drones and loitering munitions, which Azerbaijan began using to great effect, destroying Armenian armored fighting vehicles, air defense systems, and targeting everything that could be found in the open across the line of control. Fielding dated air defenses, in relatively small numbers, and with armored equipment deployed in revetments that were largely exposed to air attack, Armenian forces had not adapted to Azerbaijan’s capabilities.

During previous clashes, Azerbaijan had employed drones, but ineffectually. The dramatic change in Baku’s military performance, and the combat effectiveness of its drone fleet, could in part be explained by increased support from Turkey. Turkey provided mercenaries as a relatively cheap and disposable force, deployed F-16s, and appears to be aiding the war effort. Why Azerbaijan is using mercenaries is unclear, beyond offsetting their own casualties in costly offensives. These are not necessarily experienced or battle-hardened veterans, but more likely cannon fodder, often used in conflicts across the Middle East like Syria or Libya.

Some analysts have speculated that Turkey – which has hundreds of military advisors in Azerbaijan – is coordinating the drone campaign, offering intelligence, and possibly operating the TB2 drones directly. The extent of Turkish involvement is unclear, but it appears to be of a qualitatively different character than during previous bouts of fighting between Armenia and Azerbaijan. This is not to suggest that Azerbaijan’s armed forces cannot fight, but it is also evident they are getting help from a larger military power.

Putting technology aside, wars are ultimately contests of will, and it is evident that both sides retain the will to fight. Despite immense losses in tanks, artillery, and air defense systems, Armenia’s military effort did not collapse into disorganization, or turn into a rout. As this war demonstrates, drones are effective, but cannot take and hold terrain. Over time, they have however enabled Azerbaijan to degrade Armenian defenses, and attack its reserves and supply lines. This has allowed Azerbaijan to make steady advances with special forces and infantry backed by armor. As Armenian lines thin, Azerbaijan can attain local superiority. In some areas their forces appear to be advancing largely unopposed.

Efforts to establish a ceasefire have thus far proven futile. Battlefield exhaustion has not set in on either side, and hence there is little reason why Azerbaijan would accept a ceasefire. The war seems to have strong national support among Azerbaijanis, especially since they’re visibly winning. As Azerbaijani forces near the Armenian border, the fight may increasingly grow existential for Yerevan. What looks and feels like a military defeat will undoubtedly have political consequences for Armenia’s leadership, to say nothing of the humanitarian consequences for those caught in the battle zone.

Baku appears to have maximalist aims to retake all of Nagorno-Karabakh and outer regions under Armenian control. At least this much can be gleaned from President Ilham Aliyev’s boisterous statements. Even if both sides accept a ceasefire, Armenia will do so knowing that Azerbaijan can renew the military effort next year. Meanwhile Armenian forces have poor prospects for recapitalizing their military after the tremendous losses in equipment suffered over the last four weeks. That said, Azerbaijan has also taken casualties, many of which are not being disclosed by the regime. Video feeds from drones paint a rather one-sided impression of the battlefield, but it is doubtful that these offensives have not taken a toll on Azerbaijan’s military as well.

Michael Kofman is director of the Russia Studies Program at CNA and a fellow at the Kennan Institute in Washington, D.C.