Perspectives | At Kazakhstan's main airport, are Kyrgyz being singled out for questioning?

Women get the really creepy treatment. 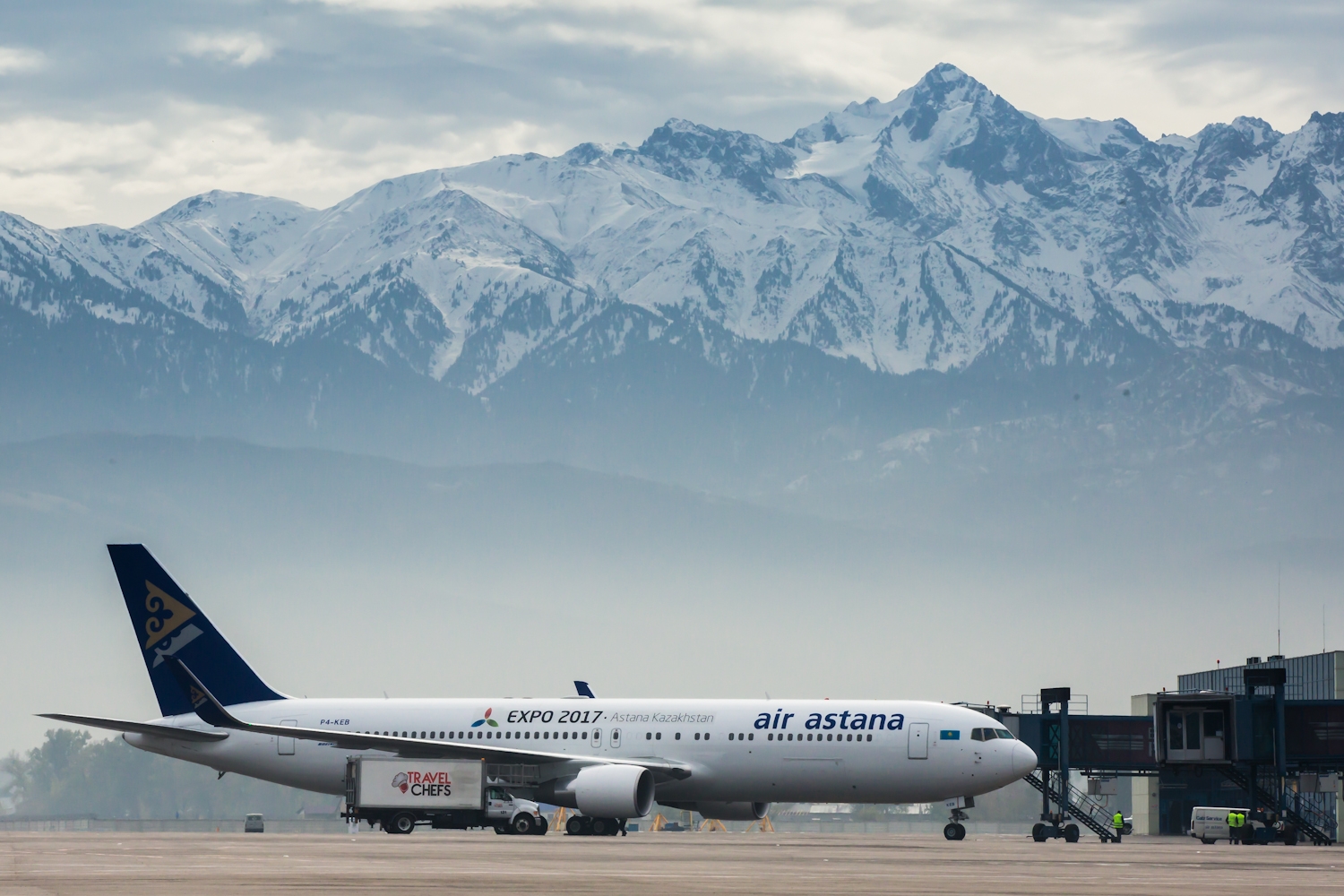 For a few months now, I have been hearing stories of Kyrgyzstan nationals being singled out for particular scrutiny by border officials at Almaty International Airport, in neighboring Kazakhstan.

This week, it was my turn.

My flight from Tbilisi, the capital of Georgia, landed in Almaty around 4:15 a.m. on April 16. As the crowd of disembarking passengers formed a line in front of the passport control booth, I noticed a small room to my right. The door was ajar and there was nobody inside.

As soon as the document inspections began, small groups of people, mostly young women, started to be escorted to that room. That was when I understood this was the place where all these interrogations I had heard about took place. “Couldn’t they at least turn on the light?” I thought to myself.

When my turn came, the passport control officer looked at my document long and hard.

“Something wrong?” I asked.

“Just a minute, we’ll be having a chat with you right now. Follow me,” he said, walking toward the room and taking my passport with him.

Hanging around Almaty airport is nobody’s idea of a good time. The terminal is small, dreary and often overcrowded. The duty free stores have little to offer. The surly staff at the cafes serve a paltry selection of stale sandwiches and drinks at astronomical prices.

But the airport does have a broader selection of destinations and cheaper flights than offered at our main airport in Kyrgyzstan, Bishkek’s Manas airport — a 250-kilometer drive away. Often, it is Almaty or nothing.

As I was being accompanied to the interrogation room, a small crowd of people had formed. Officers from the National Security Committee, or KNB, which includes the border service within its purview, were questioning arriving passengers two or three at a time.

Standing next to me were two women complaining volubly about the situation. Both were Kyrgyz nationals. One had a Kazakhstan residence permit, the other lives in Georgia.

“I am a resident of this country, why do they have to question me like this? They have all my information — when I flew out, where I live, when I returned, where I work,” said the Kazakhstan resident. The other woman, who has lived in Georgia for several years, said she was amazed to learn the rumors about Kyrgyz nationals being questioned in the room were in fact true.

From time to time, we heard the sound of raised voices leaking through the door as travelers argued with the KNB officers. It didn’t sound like it was going well for them.

Kazakhstan’s Foreign Ministry told Eurasianet in an email that stopping certain travelers for further questioning is a “standard” preventative measure deployed in the event a passenger raised any suspicions. The Border Guard Service did not respond to an emailed query about whether Kyrgyz nationals were being disproportionately singled out for attention.

There is no publicly available information about how many people are stopped in this way, although it is young Kyrgyz social media users who have been most vocal in their indignation. Anecdotal evidence indicates it is passengers flying in from Turkey, Russia, Georgia and Ukraine that draw the most attention.

As our group waited to be summoned, we watched the last inbound travelers have their passports checked and stamped. Freed from his duties, one idle passport control officer sauntered over and pleaded for patience. “Please understand, we don’t want to drag you out like this. But these are the orders from above, so we have to do it. These are checks to detect extremists. They will just record your information, and that’s that,” he said.

When we asked what exactly might be awaiting us, the young man was circumspect, saying that was the prerogative of the KNB officers.

Eventually, the resident of Kazakhstan and I were called in. In the dim room, the only sources of illumination were a desktop computer and a laptop. There was one other traveler, a woman in a blue coat in her mid-thirties, and two KNB agents in plainclothes sitting across the table.

It quickly became clear the officers were doing the good cop, bad cop routine. I got the good cop. He showed me his badge and began to pepper me with questions. “Where did you fly from? What was the aim of your trip? Where do you work?” He scribbled the answers in a pad dense with notes.

The other officer, seemingly a superior, questioned my fellow traveler and typed the responses into a Word document. She initially took a defensive line, demanding to know why she was being treated in this manner in the country where she lives. At this, the bad-cop KNB officer snapped, saying that we weren’t guests and that we should follow procedure.

“Well I’m a guest here and you’re not being very hospitable,” I said.

As my companion protested further, the ruder KNB officer waved the passport at her and said, “you could lose this very easily.”

That was the final straw for me. I was indignant that he should level such threats and I noted that there were several witnesses to testify to his crude manner.

“You can write an official complaint on the KNB website if there is something here you don’t like,” the KNB officer snorted.

Among the information that the security service agents collect are IMEI codes from mobile telephones. These are essentially universal ID codes for the handsets that could enable authorities, in case of need, to remotely detect and disable the devices.

The friendlier KNB officer accordingly turned to me to ask for my phone. I had previously anticipated this might be a possibility, so I password-protected all my apps and set a picture of a half-naked female model as my wallpaper. Seeing this, he blushed, went through the settings and hurriedly jotted down the IMEI code.

With that, I left the room. But the woman in the blue coat was held back as she argued with the KNB officers and refused to answer their questions. She explained that she had been on holiday and had no job or mobile phone.

These stories are legion. Arzymat, another citizen of Kyrgyzstan on my flight, was treated in similar fashion.

“I wanted to record it on my camera, but they said I couldn’t film in the office. And then they confiscated my telephone and checked whether I had turned on the camera or voice recorder. It was a very unpleasant procedure. I don’t want to fly through Almaty anymore,” said Arzymat, who asked his surname not be published.

Women get the really creepy treatment though. Dilrabo Samadova, who is from Tajikistan, wrote on Facebook about how she has been stopped twice in Almaty after flights from Istanbul. The passport control officers did not even bother opening her document. They took one look at the cover and led her to the room.

“One KNB officer began asking personal questions like: ‘Why is a pretty young woman like me traveling alone? What was my husband thinking letting me go? This isn’t allowed in Islam, to travel unaccompanied.’ To that, I asked whether they were fighting extremism or promoting it,” wrote Samadova.

When a superior overheard this exchange, he chided the questioning officer, Samadova said.

In the sake of fairness, it should be said that not everybody is dead set against the enhanced checks. Zulfiya, from Kazakhstan, said she too has faced similar quizzing on arrival in her native country, but that she is not too troubled by it.

“The procedure is not very pleasant, but I understand the situation overall. If during such checks they manage to catch extremists, then I am not against it. Better to be safe than sorry,” Zulfiya, who also asked to be identified only by her first name, told Eurasianet.

As I finally entered the baggage-claim area, I had my final mood-souring incident of the day as I found somebody had mistakenly collected my suitcase. (We exchanged our bags the following day in Bishkek.)

Thinking dark thoughts, I resolved to boycott the airport. But as Saviya Hasanova, an economist from Kyrgyzstan who was also once stopped by border officials in Almaty, explained, the chances I’ll be able to follow through on my threat are slim.

“It was incredibly infuriating. I was calm on the outside but inside I was burning up with crazy feelings,” said Hasanova. “I am all for the boycott. But the Kazakhs are right — we have no choice. If I was to fly with Turkish Airlines [from Bishkek], for example, it would end up twice as expensive as going through Almaty.”

In remote, offline Kyrgyzstan, the best of the internet comes in a box