Perspectives | At Valdai, Putin uncompromising but not inflammatory

At the elite annual schmoozefest, Putin emphasized that Russia can survive under Western pressure, and that his priority is not to lift sanctions, but to adapt to them. 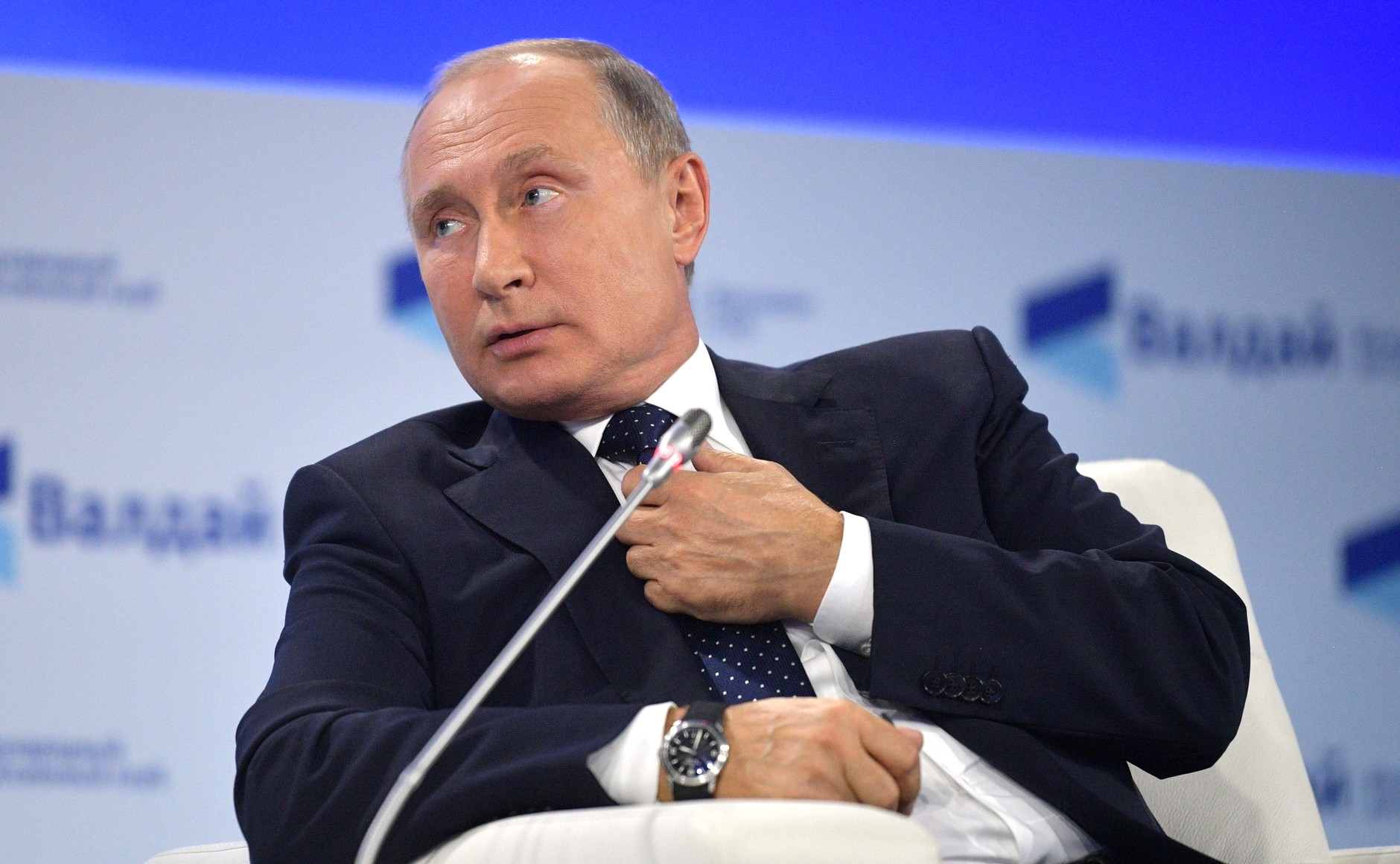 Putin to a cheesemaker seated among the distinguished foreign policy wonks: “Don’t thank me, thank the Americans for imposing sanctions.” (Kremlin.ru)

Vladimir Putin’s remarks to the Valdai Discussion Club, the Kremlin’s response to Davos, are eagerly anticipated by Russia watchers looking for hints about the president’s foreign policy positions. Speaking this year on October 18, Putin did not present a comprehensive agenda, but he nevertheless provided a useful indication of his current position on a number of issues.

First, the Russian president made clear that Western sanctions over Ukraine would not yield any unilateral concessions from Moscow. He emphasized that the Kremlin was not responsible for the crisis in relations with the West and that no one should expect Russia to shift its position under external pressure. Putin repeated a favorite trope that Russians are distinguished by a capacity to endure hardship for the sake of country and sovereignty: “The willingness of our men and women to give up their lives for their country is not common among all nations. Nobody can change these things, and this makes us certain that we can feel secure.”

These remarks may be intended as much for a domestic audience as a foreign one. A few days earlier, Audit Chamber head and former Finance Minister Aleksei Kudrin told a gathering of businessmen that Russian foreign policy “should be subordinated to reducing tensions in our relations with other countries.” This is not the first time Putin has slapped down Kudrin for suggesting that economic considerations be given more weight in foreign policy.

To underline the point, a cheese producer from outside Moscow, who had somehow found himself inside this meeting of foreign affairs experts, popped up to thank Putin for supporting domestic agriculture by imposing an embargo on Western food imports. “Don’t thank me, thank the Americans for imposing sanctions,” replied Putin, who assured the farmer that he needn’t worry about the sanctions being dropped any time soon. Contrary to Kudrin’s warnings, the message from the Kremlin appears to be that Russia can survive under Western pressure, and that the priority of government and business is not to lift sanctions, but to adapt to them. Putin also spoke at some length about plans to de-dollarize the economy, claiming that Russia had already developed mechanisms with some countries to conduct trade outside the U.S. financial system.

Overall, Putin’s rhetoric regarding Ukraine and the West was uncompromising but not inflammatory. On U.S. relations, Putin continued to triangulate, insisting that dialogue with Donald Trump is positive while blaming anti-Russian sentiment in the Washington establishment for undermining relations. Putin also made clear that the Russian military remains concerned by the U.S. Nuclear Posture Review published in February this year. The Review concluded that the U.S. requires a new low-yield nuclear capability to effectively deter the risk of a limited pre-emptive Russian strike on the battlefield against conventional forces. As Russia expert Olga Oliker noted in a recent article for Foreign Policy, the Russian government has failed to clearly explain its tactical nuclear weapons strategy, leading some outside observers to conclude that Moscow could attempt a “limited” first nuclear strike during a conflict.

While touting Russian developments in nuclear technology, Putin emphasized that Russia’s nuclear-weapons strategy has no provision for a pre-emptive strike and that Moscow would only use nuclear weapons in response to an attack on its territory. These comments appear to be aimed at dissuading the Trump administration from developing new low-yield capabilities. Whether or not they will have any bearing on the debate in Washington, they underline the need for further serious bilateral negotiations on nuclear issues.

The Valdai meeting followed just days after the Ukrainian Orthodox Church’s historic break from Moscow – a major challenge to Russia’s long-term cultural influence in Ukraine and the Kremlin’s vision of a “Russian World” as a unique geopolitical and civilizational bloc. But Putin offered no comment on this development, perhaps because it represents a serious failure of Russian diplomacy. Some commentators have suggested that the Russian Orthodox Church badly miscalculated by refusing to attend a Pan-Orthodox Council in Crete in 2016 at which the independence of the Ukrainian church was discussed.

Despite its centrality to Russia’s foreign policy and security interests, Russia’s relations with its “near-abroad” – Ukraine excepted – were barely discussed. This is in part because the Valdai Club is designed to promote Russia as a global power with universal interests. But it may also reflect a broader complacency regarding Russia’s position and influence in the post-Soviet space.

Erlan Karin, the former director of the Kazakhstan Institute for Strategic Studies, was the only person to raise developments in the post-Soviet space, asking Putin about increasing cooperation between the Eurasian Economic Union (EAEU) and China’s Belt and Road Initiative. In his response, however, the president focused on Russia’s bilateral relationship with China and the implications of Washington’s trade war with Beijing on Russian commercial interests. This underlines the fact that for Russia, negotiations on a potential free-trade agreement between the EAEU and BRI are really about managing Russia and China’s competing interests in Central Asia, rather than building a common institutional and economic framework.

Alex Nice is a freelance analyst and a Fellow of the Eurasia Democracy and Security Network.