The new park reflects the logic that dominates Azerbaijan’s system: enemies, internal and external, must be destroyed. 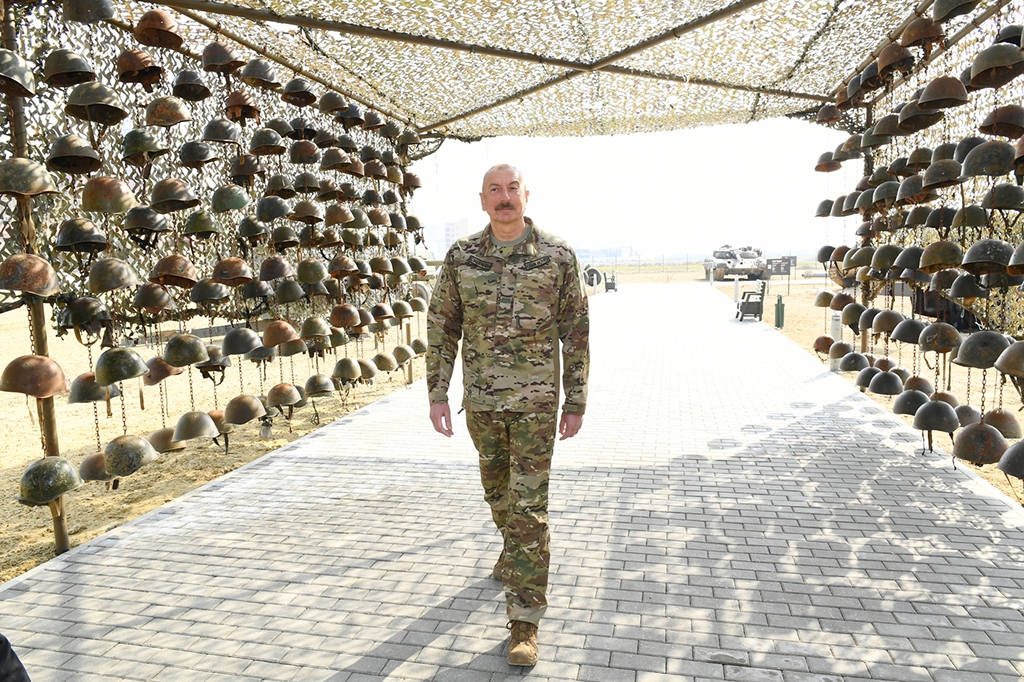 Many members of Azerbaijan’s opposition and civil society harbored a quiet hope during last year’s 44-day war against Armenia: that following Azerbaijan’s victory, the entire logic of the country’s authoritarian system would change. As they supported the government and even attacked marginal anti-war voices, they appeared to simultaneously be looking forward to a sort of national reconciliation, a time when society might be able to take a larger role in the country’s governance.

The result has been otherwise: President Ilham Aliyev has continued to attack and delegitimize the country’s mainstream opposition, maintained the same repressive methods, and has not shown any evidence of interest in reforming the country’s political system.

The recent opening of a “Military Trophies Park” in Baku, with ghoulish displays of helmets and caricatured mannequins of Armenian soldiers, has shocked many. Its dehumanization of the Armenian enemy reflects the logic of exclusion that has dominated in Azerbaijan for decades: The enemy, internal or external, must be eliminated.

While the external enemy deserves physical destruction, according to this logic, the internal opposition – at least the part that rejects the legitimacy of the ruling party – faces persecution whenever it tries to make itself visible. Recently, we have seen this in the online sexual harassment of the daughter of opposition figure Jamil Hasanli; or in the case of the leader of the Popular Front Party of Azerbaijan, a blocking of his internet and phone access for the last year. Civil society groups are forbidden from receiving grants from abroad.

Azerbaijan’s civil society was subject to a harsh crackdown in 2014; many active members were imprisoned and then released two or three years later. Many others saw the risk of remaining in Azerbaijan as intolerable and emigrated. Some who remained changed their focus to projects perceived as safer, like peace-building activities. Nevertheless, last year many of them took enthusiastically pro-war positions.

They did so out of a genuine belief that it was a just war in the name of the nation, not of the Aliyev regime. This surprised international observers as, in contrast to the often-nationalistic political opposition, these civil society groups purport to be guided by liberal values. Some of them supported the war reservedly, arguing that it was something society demanded or that Baku was left with no choice following decades of Armenian intransigence. Others, though, took aggressive, nationalist positions, going so far as to accuse the tiny minority of anti-war activists of working for foreign grants.

In either case, they were governed by the dominant national idea that has been inculcated in us since our first years in school, the obsession with Nagorno-Karabakh. It was naïve to expect that victory would change that and end the hostility and dehumanization it has engendered. 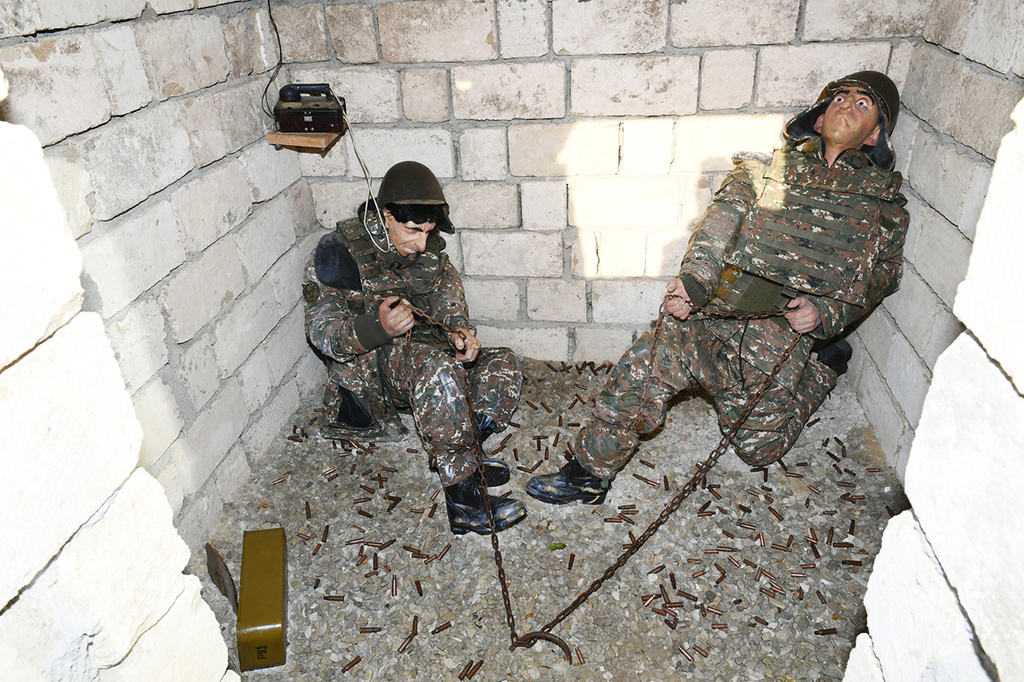 During the war, Aliyev notoriously referred to Armenian soldiers as “dogs,” and the phrase “we are chasing them like dogs” was enthusiastically adopted in civil society and opposition circles. Now, though, the same label is being used against them. At the ceremony opening the park on April 12, Aliyev referred to officials from the early 1990s government as “dogs” who were “responsible for the occupation of Shusha and Lachin,” two territories that Azerbaijan lost in the first war and retook in this one.

Following the war, in an environment that allows little dissent to the dominant nationalist narrative and with scant imagination of what that would even look like, opposition and civil society groups are left with only marginal issues to express themselves. One topic they have seized on is opposition to the Russian peacekeeping presence in Nagorno-Karabakh. But the low turnout at a recent protest organized by the opposition Musavat Party in front of the Russian embassy in Baku – with slogans like “Ivan, go home!” – demonstrates the irrelevance of the issue to most Azerbaijanis.

The hatred toward Armenians is not natural or genetically inherited but constructed, routinized, and encouraged by the country’s elites. It was not long ago, in 2010, when the Armenian Catholicos Garagin II visited Baku, met Aliyev and prayed in the abandoned Armenian church there. Armenian and Azerbaijani public intellectuals used to openly visit each others’ capitals regularly, but the last such visit was in 2009.

The ruling regime is now stronger than ever and has no need for reconciliation, neither with the opposition parties and civil society groups that reject its legitimacy nor with the Armenians in Nagorno-Karabakh. The latter would require at least some degree of democratization and reforms, and that in turn would require a greater inclusion and revitalization of civil society. It would also run the risk of angering the people who have accepted the premise of an Azerbaijani national identity based on enmity against and dehumanization of Armenians. What interest does the government have in this? 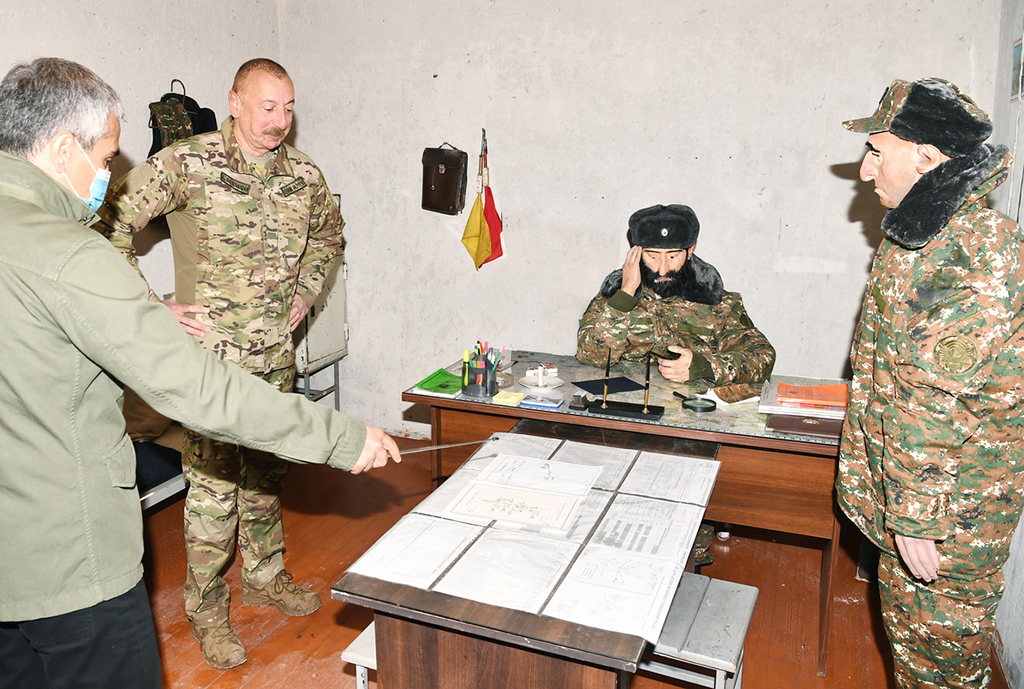 Some nominally “opposition” groups have benefited from this new situation, staking out ideological niches without challenging the government’s legitimacy. One notable example is Tural Abbasli of the AG Party, modeled after the similarly named ruling AK Party of Recep Tayyip Erdogan in Turkey. Abbasli, 38, has adopted Erdogan’s right-wing, nationalist populist model, declaring himself “the voice of the voiceless.” He has quickly gained popularity with Facebook and TikTok videos sharply criticizing government officials for corruption and demanding social justice for those he deems “ordinary people.”

“Azerbaijan is not a land of ‘cool boys,’” he has said. “Azerbaijan is us, those who live in the outskirts, those who are on TikTok. Just look at the martyrs! They were those who spent their time in chaikhanas! They are Azerbaijan, we are Azerbaijan!” In an environment where Turkey, and Erdogan in particular, have become heroes for their support of Azerbaijan during the war, Abbasli’s rise is not surprising.

Another systemic opposition group, the Republic Alternative Party (ReAl), has drifted from its previous progressive, pro-Western image to a more openly right-wing stance. The leader of ReAl, Ilgar Mammadov, along with Abbasli have gone even farther than government officials and made explicit irredentist claims against southern Armenia’s Syunik region (known as Zangezur to Azerbaijanis). The favor both enjoy in the government was illustrated by their participation in a government-run trip to the newly retaken Aghdam region.

By contrast, look what happened when a group of Azerbaijani feminists tried to organize a march for International Women’s Day. Apart from the police message that they would not allow feminists to march, they were also threatened by nationalist extremists, and as a result, the rally was much smaller than a similar event a year before. Police detained almost 30 participants.

In this context, we should not be shocked by the opening of the “Military Trophies Park.” It is of a piece with the logic that dominates the Azerbaijani state: authoritarianism inside and out.