The currency’s hard peg to the dollar could compound the economic cost of the crisis in Baku. 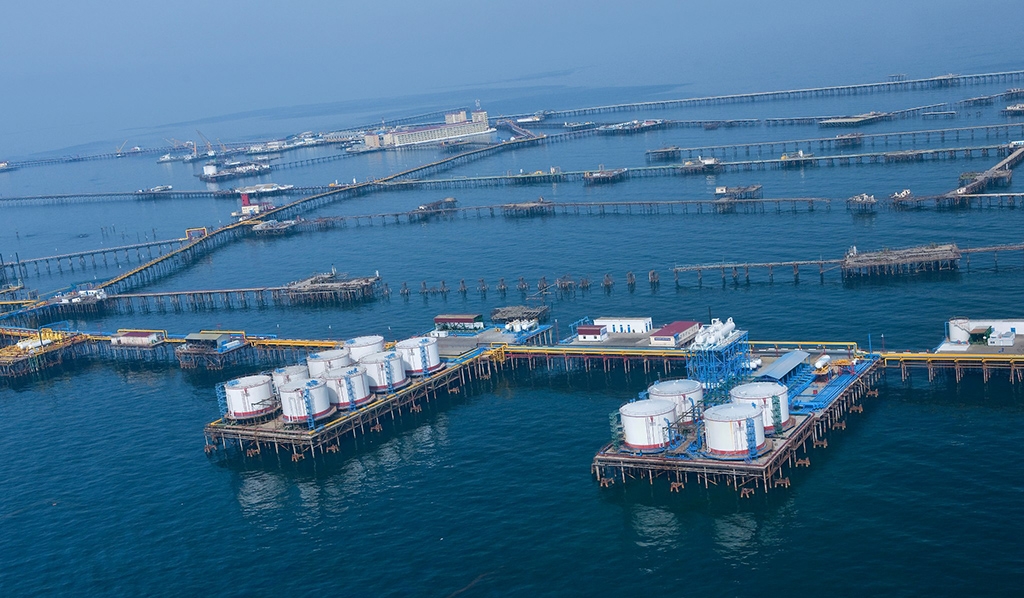 The Oily Rocks complex in the Caspian Sea (Photo: SOCAR)

Most of the world is on lockdown as governments struggle to slow the spread of the novel coronavirus pandemic. Demand for oil has collapsed. But while the Russian ruble and the Kazakh tenge have adjusted, Azerbaijan has maintained its hard peg to the dollar, and is now spending billions of them to defend its currency. This could make the crisis much costlier for Baku.

The collapse in oil prices, alongside the global economic shutdown, will put the budgets of all Eurasian oil producers under severe strain. Anton Siluanov, Russia’s finance minister, said on April 19 he expects the country’s sovereign wealth fund to shrink around 45 percent this year as it is used to compensate the state budget for lower hydrocarbon revenues.

In Russia’s case, the hit to the public finances will be mitigated by the country’s flexible monetary policy. As the oil price has fallen, the ruble has weakened against the dollar, offsetting some of the decline in the ruble value of exports and reducing the operating cost of Russian oil producers against their international competitors. A similar adjustment has taken place in Kazakhstan.

In Azerbaijan, by contrast, the authorities appear determined to avoid any adjustment to the exchange rate. Six weeks after the oil price slumped by 30 percent in a day, the Central Bank of Azerbaijan continues to peg the currency firmly at 1.7 manat per dollar. It is doing this by spending hard currency reserves in the sovereign wealth fund. In the first quarter of 2020, the State Oil Fund of the Azerbaijan Republic (SOFAZ) spent $2.8 billion, of which $1.1 billion was transferred ahead of schedule to meet growing demand for foreign currency and defend the manat.

Its efforts may be doomed. Azerbaijan is the most exposed of all former-Soviet republics to a slump in oil prices. Oil accounts for over 90 percent of exports. Direct transfers from SOFAZ account for 40-50 percent of budget revenue. And oil futures are probing new lows this week. Major global oil producers have committed to cutting output by around 10 percent, but demand is currently down more than 30 percent.

The strain on Azerbaijan’s budget and financial sector is only just starting to show in the data. In January-March, SOFAZ’s expenditure (largely budget transfers) exceeded revenue by $925 million. By contrast, in the final quarter of 2019, revenue to the fund exceeded expenditures by $407 million; over the same period last year the surplus was $3.3 billion. Given that the oil price slump only hit in March, the outflows from SOFAZ in the second quarter should be much larger.

The authorities have two options. They could try to maintain the dollar peg, drawing heavily on foreign currency reserves. That would protect household spending power and avoid financial disruption. But it would also be a big gamble. No one can be sure how quickly global demand will recover from the pandemic; it is possible that a second spike in infections could force Europe or the U.S. to resume lockdown. The peg would also require substantial upfront reductions in government spending – dollars will be needed to maintain the manat. The authorities might also need to impose some kind of capital controls to prevent an outflow of deposits.

The alternative is to devalue the manat. This would help preserve the sovereign wealth fund but likely lead to a sharp rise in inflation (although demand everywhere is weak) and could precipitate a new crisis in the country’s poorly regulated financial sector. Two devaluations in 2015 – by one-third in February and another 50 percent in December – triggered protests. The weaker currency pushed up the cost of foreign-currency debt service, leading to a jump in bad loans and the collapse of a number of banks. The financial crisis rumbled on for more than a year. In May 2017, state-owned International Bank of Azerbaijan, the country’s largest bank, defaulted.

The disruption illustrated Azerbaijan’s vulnerability to oil prices shocks. Since then, Baku has adopted some measures to strengthen the financial sector and fiscal framework. The central bank has conducted a limited clean-up of the banking sector, although levels of transparency and reporting remain poor. A new fiscal rule adopted in 2018 put a tougher ceiling on spending oil revenues to reduce the country’s reliance on oil.

But the government has not heeded all the lessons of 2015.

In contrast to Russia, Azerbaijan has been reluctant to move to a flexible exchange-rate regime, which would have helped dampen the impact of future oil-price fluctuations. In September 2019, the IMF argued that firmer oil prices and high foreign-currency reserves offered an opportune moment for the country to move to exchange-rate flexibility – as Baku had been promising to do since 2017.  The IMF noted that the de facto dollar peg “risked fueling the same macro-financial vulnerabilities that led to the recent [2014-2015] crisis.”

With the currency now under severe pressure, there are no good options for Azerbaijan’s central bank. Devaluation would compound the economic damage caused by the pandemic and could provoke popular unrest, but may prove unavoidable. Judging by the experience of 2014-15, there is risk that the authorities will end up on the worst of all paths: burning through a large amount of foreign exchange in a futile attempt to defend the peg, followed by a disruptive devaluation.

Alex Nice is a fellow at the Foreign Policy Research Institute’s Eurasia Program.