For those of us advocating for progressive values in Azerbaijan, the war has been a setback. 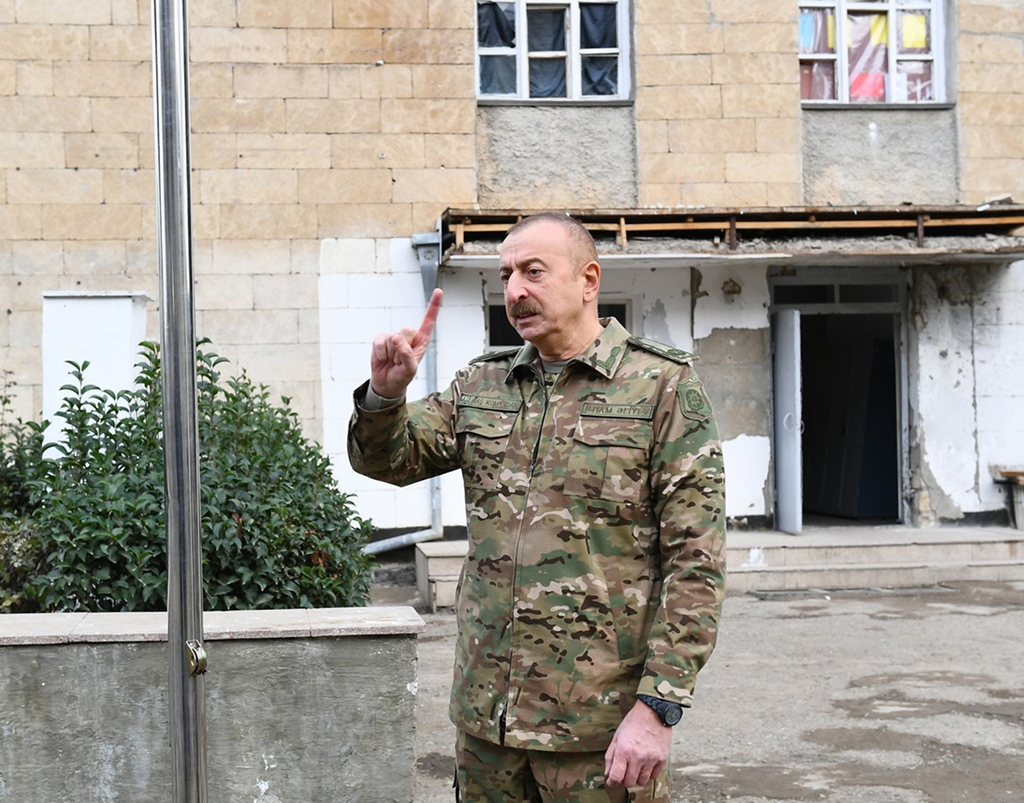 The Aliyev regime insists there’s only one way to discuss the war. (president.az)

While the outbreak of war sparked an outburst of nationalism and hatred in Armenia and Azerbaijan, a handful of voices on each side instead chose to advocate for peace. In Azerbaijan in particular, these figures have suffered heavy social media harassment, including death threats, and in some cases pressure from the authorities. A new word was coined: “novarçı,” or “no-warist,” referring to the “no war” Facebook profile image that many of them used.

In Azerbaijan, many prominent members of the political opposition and liberal civil society groups thoroughly supported the war and put aside their usual opposition to the government, often even explicitly supporting the autocratic president of the country, Ilham Aliyev. For those of us who believe in progressive values for Azerbaijan, this near-unification around the war and toxic nationalism has forced us to question everything we have been working for.

“All of a sudden, there was such a reaction in the society as if those who advocate for peace were responsible for losing Nagorno-Karabakh,” said Gulnara Mehdiyeva, referring to Azerbaijan’s loss in the first war with Armenia in the 1990s. Mehdiyeva fights for feminist values and queer rights in Azerbaijan’s largely patriarchal society, and earlier this year organized a feminist demonstration on International Women’s Day that was broken up by police.

On her Facebook page, she criticized the war and called for concern for the civilians who were endangered by the fighting. In response, she received dozens of hateful messages, some vulgar and others calling her a “traitor.” These only intensified after Armenians attacked civilian targets in the Azerbaijani cities of Ganja and Barda. “It was as if we are responsible for war crimes,” she said. “Attacking us has become a quick and easy way to be patriotic and score points.”

Now that the war is over, Mehdiyeva wants to refocus her activism to address the way women have been affected. Images of women were instrumentalized in the war, such as by identifying the “homeland” with a woman’s body that needs to be protected, while the issues of real woman have been ignored.

“The war has raised new issues: the experiences of women who are mothers of soldiers, nurses, women in the military; the experiences of spouses of soldiers with PTSD, refugee women, and so on,” Mehdiyeva said. “I’m looking forward to the time when everyone’s euphoria is finished, and we can again talk about our problems.”

One of Azerbaijan’s most prominent left-wing political activists, Giyas Ibrahim, was best known for spending two years in prison for painting graffiti on a statue of former president Heydar Aliyev.

From the beginning of the fighting, which broke out in September, Ibrahim was a frequent critic. For his outspokenness, he was detained by the National Security Service the day after the war started (and was released shortly thereafter.) He continued to be harassed online.

“Look at his eyes,” one Facebook user from Azerbaijan posted. “His eyes are full of hatred, people like this are used for terrorist attacks.” Another threatened to stab him “as soon as the war ends.”

Ibrahim fears the war will only bolster Azerbaijan’s dictatorship.

“This war has done more to strengthen the foundations of the autocratic government in Azerbaijan,” he said. “People are going to consolidate around the current regime for at least five years, thanks to the effective propaganda they used both during and after the war.”

Azerbaijan’s political opposition will likely become even more marginalized following the country’s victory, Ibrahim said: “Even if there are attempts to establish a fresh, progressive force, it will be subjected to repressive measures by the government, which has become stronger lately.” The best that anti-war forces can hope for, he said, is “to form a ‘real’ opposition and to influence public opinion and the public agenda at some critical moment.”

One prominent journalist and activist, Arzu Geybulla, gave an interview during the war in which she said that the reports of Syrian mercenaries in Azerbaijan – hotly denied by the government and most Azerbaijanis – were most likely true. She immediately became the subject of attacks.

“When you try to clarify your position, they attack even more fiercely,” she said. “When it comes to Armenia and Karabakh, the moment you bring a different opinion, you become a traitor.”

I myself have suffered attacks, too. I was among several activists from Armenia and Azerbaijan who signed an early-October petition calling for peace, and as a result, I was called a “traitor” on social media and my family got a call from other relatives who said I should be ashamed that I signed the petition “while our army is fighting.”

“The first and most difficult thing was the deep isolation,” Giyasbayli said. “My former colleagues supported the war, justified it as a revenge of the nation. […] I didn’t expect that only a few would be faithful to our principles. We were the target of attacks, which was predictable. It is painful. For the moment, I have no strength to continue peacebuilding.”

For progressive activists, taking an anti-war position was a matter of principle, regardless of how marginalized it has made us. As Ibrahim put it: “We have lost credibility among the people.”

We are now seeking new ways to struggle in post-war Azerbaijan, where the government’s authoritarian populist approach has dramatically altered society and won it mass support. For those of us who firmly support progressive values, we are going to have to start small.