Perspectives | Beyond Minsk? The remaking of the Armenian-Azerbaijani peace process

The 2020 war, and now Russia’s invasion of Ukraine, have significantly shifted the landscape for the negotiations. 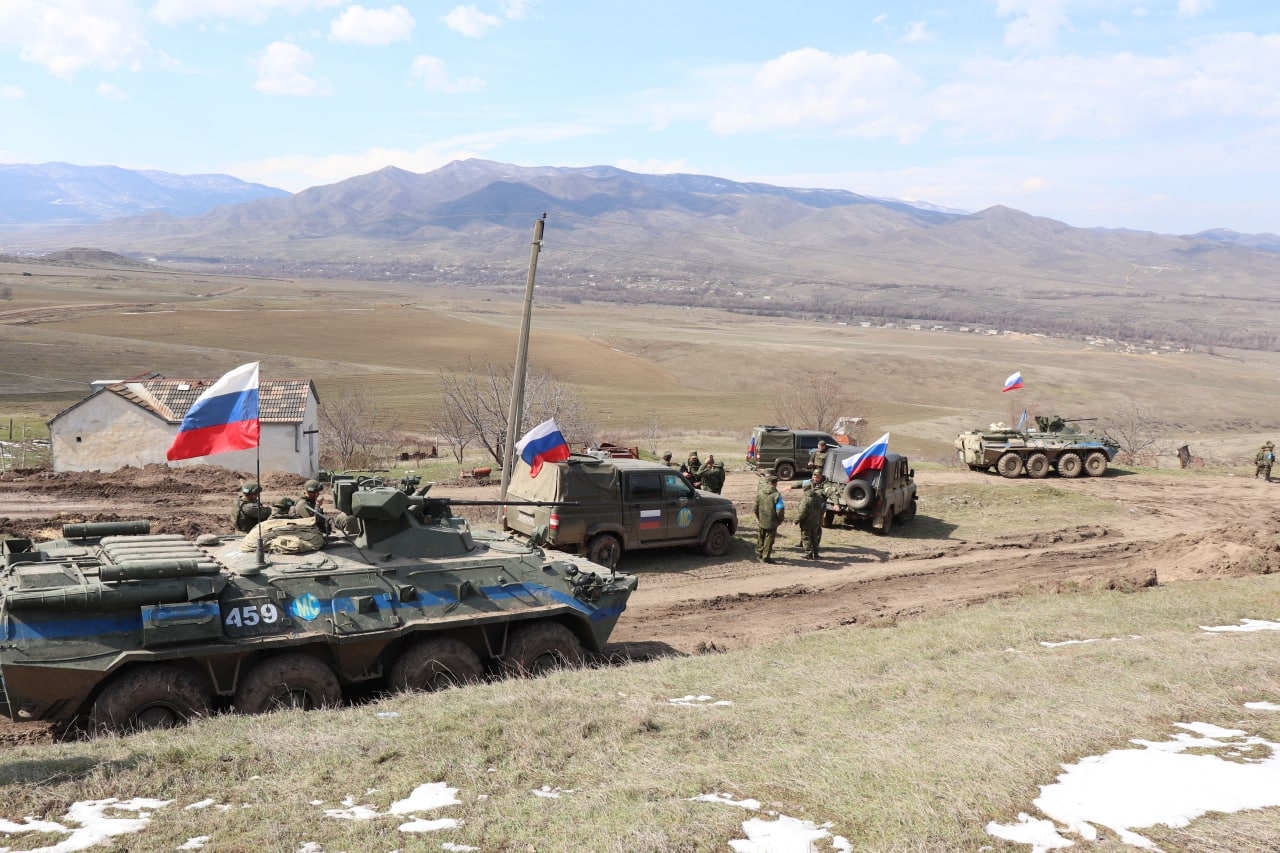 The Armenian-Azerbaijani peace process is moving rapidly into uncharted and unpredictable waters. The continuing fallout from the war between the two sides in 2020 has been further complicated by the invasion of Ukraine by Russia, which brokered the end of the 2020 war and deployed peacekeepers to Nagorno-Karabakh. Potentially significant shifts in power and influence are unfolding among the many actors seeking to mediate a settlement of the decades-long Karabakh conflict.

While the overall picture is deeply complex and riddled with uncertainties, several dynamics have emerged to drive this new era of negotiations over a possible Armenian-Azerbaijani peace. There is an ongoing reshuffling of the external forces seeking to mediate the conflict, with different outside actors focusing on particular sets of issues, and an emerging – though fragile – commitment in Baku and Yerevan to more direct, bilateral negotiations.

Each dynamic brings its own set of problems and possible risks.

Multipolar structuring of the mediation process

Since the 2020 war, there has been an acceleration of the movement from a multilateral to a multipolar structuring of the mediation landscape. This is evident in the rising profile of the European Union (EU) in a mediating role.

On April 6, European Council President Charles Michel met for a second time with Armenian Prime Minister Nikol Pashinyan and Azerbaijani President Ilham Aliyev, following up on their earlier meeting in December 2021. At both meetings a number of agreements were reached, notably on the restoration of railway links, the formation of a bilateral Armenian-Azerbaijani border commission and – potentially most significant – on the formal opening of preparations for a peace treaty.

As the EU’s profile has risen, that of the OSCE Minsk Group has declined, by all appearances terminally so. The lead body for mediating the conflict since the first war between the two sides in the 1990s, the Minsk Group had been led by a troika of French, Russian and American co-chairs since 1997. This format played a unique role as a rare theater of symbolic Russia-West cooperation in Eurasia’s conflicted landscape, even if the negotiations stagnated after 2011.

The Minsk Group was sidelined during the second Karabakh war in 2020. Since then, its prospects have looked ever more uncertain. Although announcements indicating tentative steps toward resuming its role were made in September 2021, the war in Ukraine appears to have sealed the Minsk Group’s fate.

Russian Foreign Minister Sergey Lavrov claimed on April 8 that France and the U.S. were no longer cooperating with Russia within the Minsk Group framework. A week later, Russia reappointed its envoy to the group, Nikolai Khovaev, to a new job as the Russian foreign ministry’s special envoy responsible for Armenian-Azerbaijani normalization.

In Syria, Russia managed – with Turkish and Iranian help – to establish a new negotiation format, the Astana process, that excluded Western actors. Now, in the Armenian-Azerbaijani setting the EU and Russia are fielding parallel mediation initiatives associated with their respective special envoys or representatives. The risk is that these efforts may become competitive.

Competitive mediation characterized the Armenian-Azerbaijani peace process in the mid-1990s, as the CSCE (the Conference for Security and Cooperation in Europe, the precursor to the OSCE), Iran, and Russia all offered varying initiatives. Indeed, the Minsk Group troika bringing France, Russia and the U.S. together was devised in early 1997 precisely to channel competing efforts through a more effective, coordinated mechanism.

The EU has sought to minimize any perceptions of competition by emphasizing that it is not replacing, but building on existing, Russian-brokered agreements. This might be seen as a strategy to supplement and promote existing commitments. It is significant that the joint border commission agreed in Brussels on April 6 is explicitly defined as a bilateral body, rather than a trilateral one convened by the EU. This contrasts with the trilateral working group established on January 11 through Russian mediation aimed at addressing infrastructural projects, which is convened by Russia.

Containing competitive dynamics will be a major challenge, especially for as long as war in Ukraine continues. But ultimately it is only more direct, bilateral problem-solving between Baku and Yerevan that can indigenize a peace process that has been internationalized for so long and to so little apparent effect.

Clustering of issues and actors

A second key dynamic emerging is a “clustering” of the mediation agenda. We are witnessing what appears to be a compartmentalization of issues and actors, whereby the EU is assuming a role mediating on technical and economic issues at the interstate level between Armenia and Azerbaijan, while the issues of security and status in Nagorno-Karabakh lie with Azerbaijan, Russia and the OSCE.

The EU’s offer, as set out in the readouts of the December and April meetings, is focused on technical issues emanating from the formal (Russia-led) negotiations, such as the commitments to demarcating and opening borders and establishing new transportation links. The EU is also uniquely placed to help financially underwrite the new infrastructure connecting Armenia and Azerbaijan implied by the opening of borders and transit routes mandated in the 2020 ceasefire statement.

The EU’s technical and financial offer does not, however, come with a corresponding security offer. Except for the symbolic presence of a small contingent of Turkish peacekeepers at the ceasefire monitoring center near Aghdam, Russia retains sole responsibility for providing security in the form of a 2,000-strong Russian peacekeeping contingent deployed in Karabakh and a stipulation in the November 9, 2020, ceasefire agreement that the Russian border service will control any new transit routes.

Similarly, the EU’s intervention is framed as mediating at the interstate level, without addressing the intrastate level of issues relating to the Armenian population in Nagorno-Karabakh. Armenian observers drew attention to the fact that neither in December nor April did the EU readout of the meetings in Brussels mention the term “Nagorno-Karabakh.”

The conflict’s central issue, the contested status of the Armenian population in Karabakh, formally remains within the mandate of the OSCE’s Minsk Group. In the current situation, therefore, the core issue in the conflict is left under the exclusive mandate of a body that appears, for now, to have disintegrated.

This is to a large extent a reflection of Azerbaijan’s military and diplomatic success in taking the status issue off the negotiating table. Baku considers the conflict effectively resolved and the issue closed, allowing for peace to be framed as a technical and economic project in normalization at the inter-state level. This perspective also emphasizes the reality that indeed, for the first time in decades, there are incentives across the Armenian-Azerbaijani divide to engage in economic ties and infrastructural linkages.

Nevertheless, issue clustering, wherein various items on the mediation agenda are addressed by different actors, has several implications. The first is that any technical and economic agreements that are reached may not have the necessary security context to take hold: Whatever Baku and Yerevan agree at the interstate level could be derailed by new rounds of violence in Nagorno-Karabakh. Regarded primarily as wielding soft power, in this context the EU does not have the leverage it might have were Armenia and Azerbaijan candidates for membership in the bloc.

A second implication is that with the OSCE and Armenia effectively removed from negotiations and provision of security, Karabakh Armenians will turn to the only security patron left – Russia. This is already evident in discussion in the territory of a possible referendum to join Russia.

Geography, if nothing else, militates against such an outcome. Yet ultimately the route to obviating the need for third-party presence on Azerbaijani territory lies in a transformation of Baku’s relationship with the Karabakh Armenian population. Long obscured under the colossal superstructure that has built up over the decades, it is this relationship that lies at the heart of the conflict.

Leadership consensus on the necessity of negotiation

The preceding dynamics are largely concerned with the roles and capacities of outside actors, which tend to take center stage in analysis of the South Caucasus. Another key emergent dynamic could challenge this: the apparent consensus among the respective leaderships in Armenia and Azerbaijan on the necessity of negotiations.

This is reflected in new kinds of bilateral interaction, such as talks in Brussels on March 31 between Hikmet Hajiyev, Aliyev’s senior foreign policy adviser, and Armen Grigoryan, the secretary of Armenia’s National Security Council, and a call between foreign ministers Jeyhun Bayramov and Ararat Mirzoyan on April 11. Both events were unprecedented in recent memory.

The motivations to engage differ. For Aliyev, it is important to consolidate Azerbaijan’s military victory in 2020 and avoid the hardening of a new status quo. Baku welcomes multipolarity to steer the process away from both Russian unilateralism and the Minsk Group’s multilateralism, and towards the kind of balancing game among different poles at which Azerbaijani foreign policy excels. It also allows a reframing of the peace agenda at the interstate level only, silencing discussion of Nagorno-Karabakh’s status.

For Pashinyan, with Armenian military capacity broken in the 2020 war, Russia’s security umbrella increasingly in doubt after its invasion of Ukraine, and a normalization process with Turkey contingent on Azerbaijan’s acquiescence, there appear to be few choices but to negotiate on Azerbaijan’s terms. In a speech to the Armenian parliament on April 13, Pashinyan both conceded that he should have led a public debate about the real state of the negotiations before the 2020 war and appeared to set the stage for future Armenian concessions on the status issue.

Yet both countries also share a tacit consensus on thwarting a Russian monopoly on the management of their conflict. Yerevan would certainly have preferred to see a revival of the Minsk Group as the mediator of a comprehensive solution, including the issue of Nagorno-Karabakh’s status. But in the Minsk Group’s absence, the EU is the next best alternative. This should not be overstated: Armenian confidence in Western actors has never been lower. Yet for their different reasons, Baku and Yerevan have converged on Brussels as an alternative mediator.

The risks for Aliyev and Pashinyan are that they will not secure wider buy-in for whatever they agree. This risk is particularly dangerous for Pashinyan, as he is effectively being compelled to renounce Armenia’s patronage of the Karabakh Armenians’ self-determination claim in the absence of alternative, credible and long-term security guarantees. This is leading to a potentially destabilizing level of discord with Stepanakert. Violent domestic contestation of any agreements Pashinyan reaches cannot be excluded.

This situation recalls an earlier moment of bilateral negotiation in the Karabakh peace process when, in 2001, then-presidents Heydar Aliyev and Robert Kocharyan agreed on parameters for a territorial swap to resolve the conflict. This two-man solution, however, failed when the wider Azerbaijani elite rejected the concessions that it would have required of Azerbaijan.

More than 20 years later, political elites in Armenia and Azerbaijan face the same problem – legitimating the outcomes of their negotiations with wider societies excluded from their deliberations – but in a significantly more challenging international environment. No single unifying framework appears to be available for a comprehensive solution addressing all the issues contested by Armenians and Azerbaijanis. Whether a compartmentalized peace based on agreements in some areas can transform the context for discussion of others, in a context where coercive bargaining has been normalized and against a backdrop of fractured and radicalized outside powers, remains uncertain.