Perspectives | Blame it on Russia? The danger of geopolitical takes on Georgia’s far right 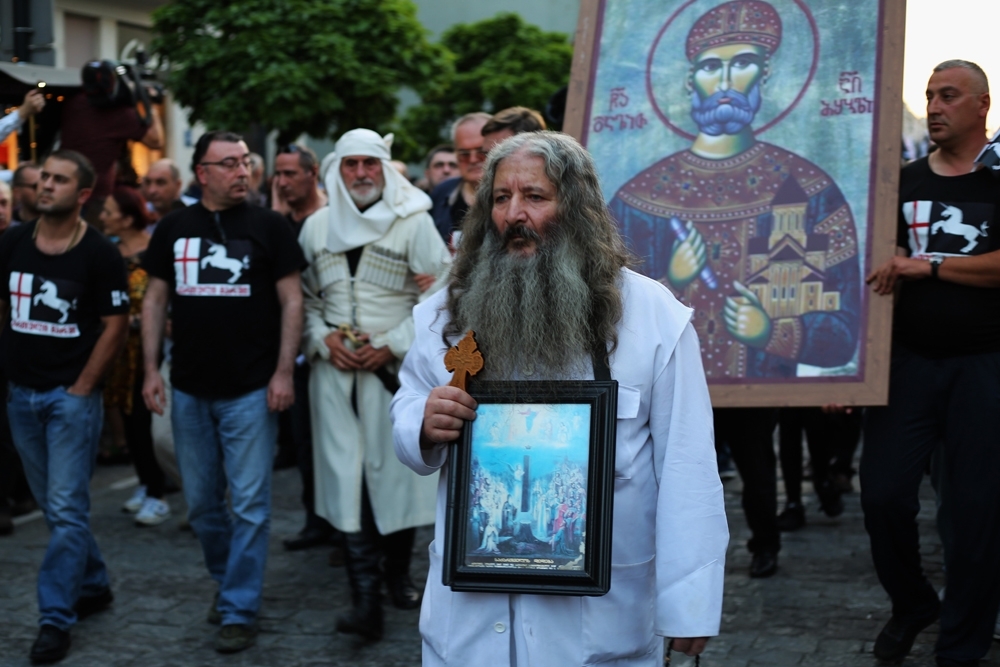 A Georgian monk at a 2017 anti-immigration rally (photo: Giorgi Lomsadze)

As violent homophobic mobs attacked Tbilisi Pride last week, journalists and commenters rushed to a familiar conclusion, framing Russia as the mastermind, labeling the far-right groups as “Putinist” and “pro-Russian.”

Russia has been a familiar scapegoat in Georgian politics for years. This is unsurprising, after decades of conflict between the two. One might argue that describing the radical right as pro-Russian could mobilize public opinion against it, since most Georgians aspire to join the European Union.

Breaking down the arguments behind the label reveals inconsistencies and false assumptions that ultimately hinder our understanding of what drives supporters of Georgia’s loosely aligned illiberal groups. Like elsewhere, Georgia’s far right is not a unitary, consolidated actor.

When discussing the links between the Georgian far right and Russia, commenters usually point to two mechanisms: ideology and finance.

Yes, ideologically, members of the Georgian far right do resemble their Russian counterparts. The narrative presenting Orthodox Christian Russia as a bastion of traditional values versus the decadent West is nothing new. The basis of this narrative, however, lies in nativism and authoritarianism, which unite the far right across the globe, from the U.S. to Australia and from India to France. In the Georgian context, “natives” means Orthodox Christians, ethnic Georgians, and heterosexual men and women; everyone else is alien: immigrants, religious minorities, LGBTQ+ individuals, and international organizations. Authoritarianism, in turn, implies the belief in a strictly ordered society where any deviation must be severely punished. This explains opposition to the decriminalization of drugs and calls to restrict criticism of religious belief.

Another oft-cited link is the alleged financial assistance that the Georgian far right receives from Russia. Indeed, investigative journalists have found evidence linking the Alliance of Patriots, the largest far-right party in Georgia, to the Kremlin. Yet this connection cannot be generalized to the entire far-right movement, which is anything but unified.

Many of these commenters rely on a 2018 report by Transparency International Georgia, which, albeit informative, is still superficial, if not misleading, not least by broadly describing the whole far right as “neo-Nazi.” The other source often used as evidence is a 2020 report by the Estonian Foreign Intelligence Service, which says that some of the leaders of one far-right party, Georgian March, have “ties to Russia and its influence activities.” The report does not back this claim with sources or evidence. Even if some Georgian March leaders have these ties, the claim cannot be generalized to describe the entire movement.

Others also often cite bonds between Levan Vasadze, a local firebrand, with Russian far-right ideologue Aleksandr Dugin. Neither Vasadze nor Dugin deny their ties; they are openly friendly. However, Vasadze is also linked with Western far-right figures and organizations. As a close associate of the World Congress of Families, a Christian-right organization based in Illinois, he has participated in far-right events with Italian, Hungarian, and Polish far-right leaders. This is a horizontal, distributed global movement, not a Russia-led one.

What do we know about the Georgian far right?

The limited data on Georgia’s far right points to a more nuanced picture.

My own research on far-right protests in Georgia between 2003 and 2020 finds the far right is ambivalent, but not neutral, towards the West. There have been several large rallies against “Western” targets, including NATO and that perennial bugaboo, billionaire philanthropist George Soros. [Editor’s note: Soros’s Open Society Foundations is one of Eurasianet’s funders.] Yet others have organized in support of Donald Trump and Hungarian strongman Viktor Orban. By contrast, the far right is neutral, at best, towards Russia: Over these 18 years, only two small rallies targeted Russia, both organized by small far-right groups that have since disappeared from the public eye.

Their online activities reveal similar trends: Anti-Russian narratives are rare and the anti-Western narratives are not straightforward. While most oppose reforms to align EU-Georgia trade, they also consider Europe to be Georgia’s civilizational homeland. Interestingly, when advocating policies to solve Georgia’s problems, far-right actors urge the authorities to follow the nativist examples of Trump, Orban, or Brazilian President Jair Bolsonaro – they do not invoke Vladimir Putin.

What unites far-right actors around the world is their simplification of complex political processes into scapegoating and emotions. Despite low immigration rates in Georgia, for example, the far right argues that anti-immigrant vigilante groups are necessary to stop Georgians becoming a minority. Similarly, when progressives rally against LGBTQ+ discrimination, the far right argues that they are encouraging pedophilia or incest.

The lack of firm evidence does not mean the absence of Russian ties or influence. And it certainly does not mean that instability in Georgia would not be welcome in Moscow. During the violence against Tbilisi Pride, Dugin wrote approvingly on Facebook.

But while many evolved from Orthodox Christian organizations, today’s far-right actors are diverse in both form and ideology, from populist radicals, like the Alliance of Patriots, to social movement organizations, like Demographic Society XXI, and extreme-right informal groupings, like the Society for the Protection of Children’s Rights. Their leaders’ lukewarm reaction last month to Vasadze’s new “Unity, Essence, Hope” party illustrated this fragmentation, and why the far right has not yet been successful at the ballot box.

Seeing purely geopolitical motives obscures local drivers. Fast-paced liberalization since 2003 accompanied by widening social inequality has created fertile ground for hate. So has pandering to the far right by mainstream politicians and the powerful Church.

Finally, the Russia vs. the West focus steals attention from the far right’s scapegoats. An overwhelming majority of far-right rallies in Georgia target the LGBTQ+ community. Annual demonstrations against Tbilisi Pride unite the far right in a way few other issues can. When commentators describe the angry men screaming in the streets as Russian stooges, they are pushing the victims of far-right violence into the shadows.

Glossing over these complexities hinders our understanding of far-right actors and disincentivizes empirical research. A lack of research, in turn, prevents a thoughtful response. As the experience of many European countries shows, previously marginal political forces can amass considerable political power, catching states and commenters by surprise. The discourse this week suggests Georgia could be on a similar path.

Tamta Gelashvili is a PhD candidate at the University of Oslo researching far-right movements in Georgia and Ukraine.