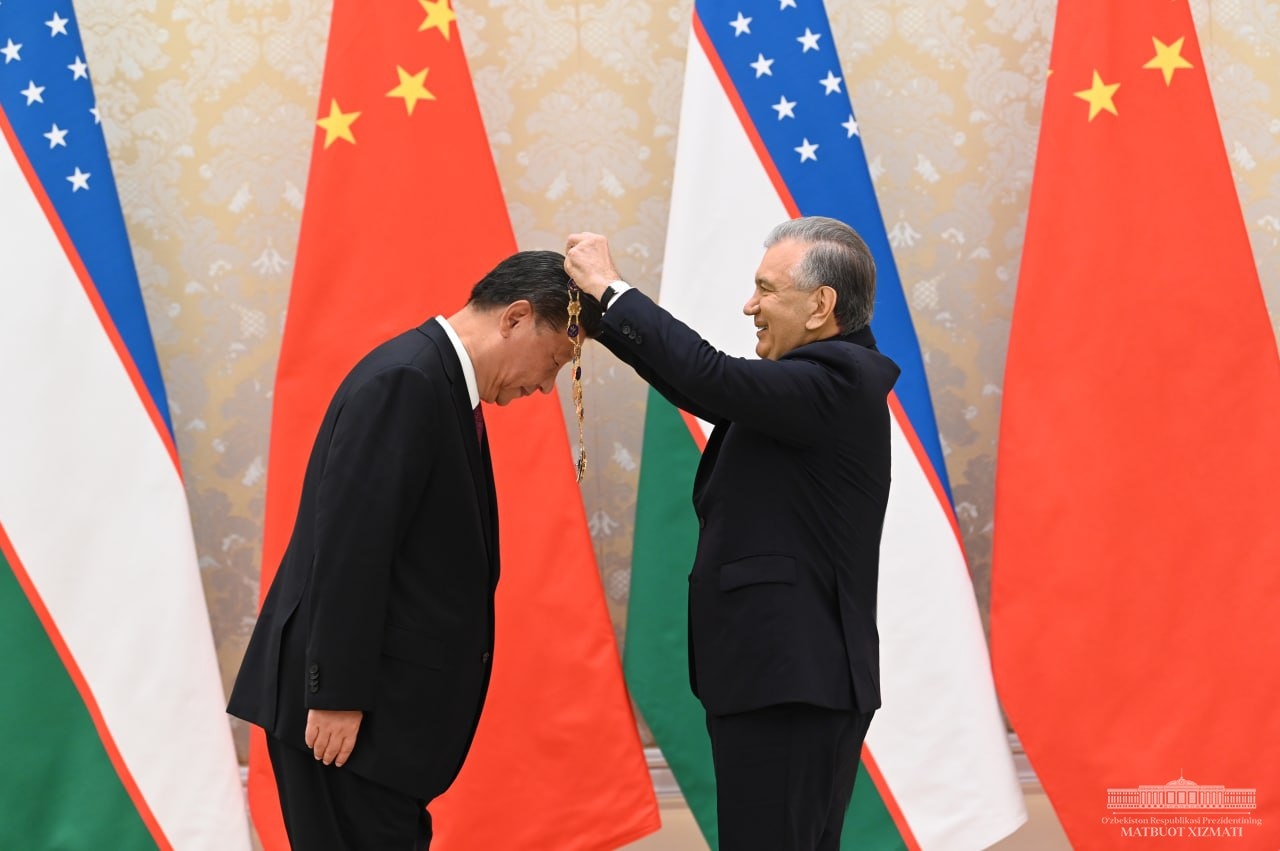 And we have a new hegemon (Uzbek presidential administration)

Vladimir Putin’s stature shrank in Samarkand. At the Shanghai Cooperation Organization (SCO) summit in Uzbekistan last week, Russia’s beleaguered leader essentially apologized to his Chinese counterpart, faced verbal reprimands from India’s Prime Minister, and waited uncomfortably for the Kyrgyz President to arrive late to a bilateral meeting. The SCO summit provided visual, real-time evidence of Russia’s diminished standing in Central Asia, which has faded due to the Kremlin’s foolish and poorly executed invasion of Ukraine.

While Moscow’s already-eroding influence in Central Asia is set to decline even more rapidly, China will remain somewhat reluctant to assume regional hegemony, due to fears of upsetting its junior partner. Still, Xi Jinping’s recent visits to Kazakhstan and Uzbekistan, Central Asia’s wealthiest and most populous countries, respectively, and other Chinese actions suggest that Beijing is increasingly willing to assert its regional interests, even at Moscow’s expense. While China’s rise will bring new risks for the region, it could also bring more economic opportunities.

Beijing and Moscow have, in recent history, conducted a division-of-labor in Central Asia: China has enjoyed a leading economic role, but has generally deferred to Russia on security matters, including the uprising in Kazakhstan this past January, which was suppressed, in part, by the Moscow-led Collective Security Treaty Organization.

Russia’s ability and willingness to retain its regional security role is doubtful. The Russian military’s performance in Ukraine has been extraordinarily unimpressive – it will take years to return the Russian armed forces to its pre-war state. While Russia will remain an important actor in Central Asian security affairs, its influence is waning.

China will likely fill this security vacuum, albeit somewhat ambivalently. The People’s Republic wields the world’s second-most capable military and has the capacity to dominate Central Asian security. But China will continue to try to minimize its role for political reasons. Beijing still views Moscow as a useful companion in its competition with the West, particularly the United States, and will attempt to symbolically defer to the Kremlin when possible, given Russia’s historical role in the region and the need to soothe Moscow’s ego and anxieties. Moreover, Central Asia is only a tertiary priority for Beijing, which has grander ambitions for Taiwan and Southeast Asia.

Beijing does have important, and growing, economic interests in Central Asia, however, as China and the five Central Asian countries conducted $48 billion in bilateral goods trade last year. Central Asia is also an important hydrocarbon exporter and directly affects Chinese economic interests, through the Central Asia-to-China natural gas pipelines, and indirectly, via Kazakhstan’s west-bound oil exports. Central Asia also has good solar and wind energy potential, which could provide a market for Chinese manufacturers. Moreover, the China-Kyrgyzstan-Uzbekistan (CKU) railway has made some headway over the past year; if realized, it could cut China-Europe rail freight distances by 900 kilometers and shave a week off shipping time.

Beijing responded to Russia’s blockading of Kazakhstani oil exports by halting major investments in Russia, warning state-owned energy firms to avoid any “hasty” purchases, and publishing a history of natural gas in Beijing that conspicuously omitted the $55 billion, Russia-to-China Power of Siberia pipeline that opened in 2019. While visiting Kazakhstan’s president the day before seeing Putin at the SCO summit, Xi also pledged to “resolutely support Kazakhstan in the defense of its independence, sovereignty and territorial integrity,” warning – in a clear nod to Russian threats – against “interference by any forces in the internal affairs of your country.”

Beijing and Moscow continue to share many common interests in Central Asia. Both sides are deeply hostile to the Washington and Brussels-led constitutional democracies, neuralgic about regional pro-democracy movements, and fearful that Islamist extremist groups could use Central Asia as a springboard. Nevertheless, the two sides may jostle for regional influence, due to conflicting economic and security interests. With Russia’s power and influence rapidly eroding due to its invasion of Ukraine, China is the most important regional actor and is increasingly willing and able to shoulder aside its weaker, junior partner.

While a regionally dominant China will bring new risks for Central Asian states, it could also bring economic benefits. Beijing is traditionally much more accommodative of international trade than Moscow and more supportive of intra-regional economic linkages. While Central Asian countries will continue to have limited space for maneuver due to the overwhelming power of their authoritarian neighbors, the region’s power transition could bring new opportunities.

Joe Webster is a senior fellow at the Atlantic Council, a contributor at The China Project, and editor of The China-Russia Report. Opinions in this article are his own.