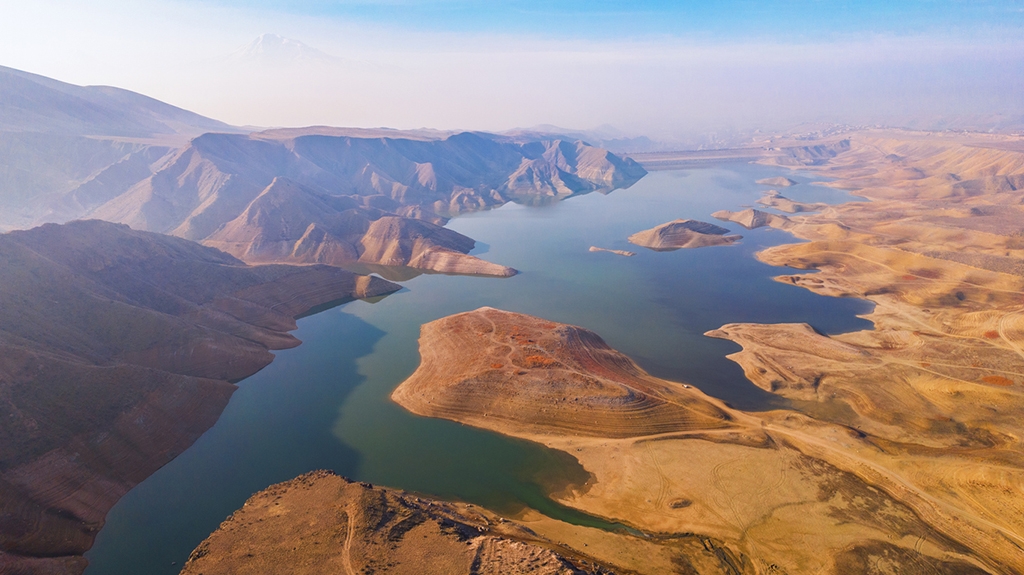 Among many other threats, global climate change promises unprecedented water variability in the South Caucasus. The region is facing increasingly erratic rainfall and snowmelt, which is endangering drinking supplies, agricultural output, and hydropower generation.

This is made still more complicated by the fact that the region’s water flows across the borders of countries with already tense relations.

The region receives the large majority of its fresh water from the transboundary Kura and Aras rivers, which both originate in Turkey and flow into the Caucasus. As the most upstream actor, Turkey has responded to climate-induced water variability by building dams that can capture as much of the water supply as possible before it flows outside its borders. This dam development is coming at the expense of downstream water users in the Caucasus.

Usually, when talking about Turkey’s dam development, the Tigris-Euphrates river basin gets most of the attention. Over the past 50 years, Turkey's State Hydraulic Works (known by its Turkish acronym DSI) has built 22 dams and 19 hydropower plants on the Tigris and Euphrates rivers, as part of its multi-billion dollar Southeast Anatolia Project (GAP). The GAP’s effect on downstream rivers has left large parts of Syria and Iraq in severe drought, increasing Ankara’s leverage over its Middle Eastern neighbors and particularly threatening Kurdish political movements in Syria, among other strategic geopolitical considerations.

Similar effects could be in store for the South Caucasus.

Over the last two decades, the DSI also has been damming water resources on both the Kura and Aras rivers. On the Kura, DSI is pursuing the Kura Project Master Plan, which was launched with the aim of increasing irrigated lands in the Ardahan province, near the border with Georgia, from 3,000 to 51,000 hectares. As shown in the map below, the plan envisages five major dams along the upper Kura. The Besikkaya Dam (map; 4) is expected to be the largest upstream dam on the Kura at 107 meters and with a carrying capacity of 211.6 million cubic meters. This has particularly raised concerns both among local activists and downstream in Azerbaijan.

According to activists in the province of Ardahan, Besikkaya would divert 70 percent of the Kura’s water flow to the Coruh River, a transboundary river shared by Turkey and Georgia. The direct impact of the dam on the region’s agriculture and ecology has led activists to oppose construction. Climate-induced water shortages have already led to economic decline in the largely agricultural province, giving Ardahan the third-highest rate of population loss among 81 Turkish provinces between 2000 and 2020.

What’s more, Azerbaijani environmentalists also have pointed to the Besikkaya Dam as a threat to their country’s water security. The dam threatens to lower the level of the Kura in Azerbaijan, thus endangering water supplies for irrigation and drinking water.

Turkey also has substantially increased its dam-building efforts on the upper Aras river. Compared to the projects on the Kura, Turkey has built a greater number of dams on the Aras, though with a lower capacity. From 2012 to 2014, Turkey constructed six hydropower plants on the Aras and is currently planning eight more.

Among the completed projects, the Karakurt and Alp-Aslan 2 projects in the Kars and Mush provinces, respectively, stand out for their proximity to the Armenian border. Downstream actors have already voiced concerns about the Karakurt Dam, which has reduced the Aras’ flow by 1.6 billion cubic meters.

More and potentially larger projects are still in the queue. Among these, the recently announced Soylemez Dam particularly stands out. With a planned height of 113 meters and a carrying capacity of 1.4 billion cubic meters, the project would create the fourth-largest reservoir in Turkey. According to Turkish press reports, construction of the dam is planned to begin in Koprukoy, near the city of Erzurum, as early as 2022.

The consequences of this upstream dam would be felt most strongly in Armenia’s Ararat Valley, the source of 36 percent of Armenia’s agricultural yield. In fact, many of the 21 dams that Armenia is itself planning target exactly that issue, by expanding irrigation capacity for farms in the valley. Compared to those in Turkey, Armenian dams are smaller in scale, with the reservoir of the largest planned project, Kaps, projected at a capacity of 70 million cubic meters, one-twentieth the size of Soylemez.

Georgia has likewise upped its game on dam-building, planning 40 hydropower plants in the coming years. With hydropower representing about 80 percent of its current electricity mix, Georgian dam projects have focused on bolstering the country’s energy independence by reducing its need for gas from Azerbaijan. Of late, the environmental impacts of dam development have made these projects increasingly controversial. But, to date, no major projects have been planned or built on the Kura. The only exception is the Gurturk Dam (map; 9) which is planned to be constructed where the river crosses the Turkish-Georgian border.

Azerbaijan, the country furthest downstream in the basin, might have something to do with Georgia’s lack of dam development on the Kura. Geographically speaking, Azerbaijan is the most vulnerable to upstream dam development: 76.6 percent of its water originates outside its borders. Accordingly, Azerbaijan has actively negotiated with Georgia over water quality and supply. Baku has been seeking a water treaty with Tbilisi since at least 2013, and efforts are currently underway to finalize a bilateral agreement on how to manage the Kura, under the aegis of the European Union. And while Azerbaijan has sought cooperation on water with Georgia, water has been a key driver of the conflict between Armenia and Azerbaijan.

Water usage on the Kura-Aras is currently regulated by Soviet-legacy central planning norms not well suited to the variability that climate change poses. In the post-Soviet era, outdated treaties signed bilaterally between Turkey and the USSR don’t take into account downstream interests and pose enforceability challenges. Instead, dam development in the basin has been left to direct state-to-state negotiation.

Turkey has benefited the most from this hydroanarchic status quo. Since the collapse of the Soviet Union, Turkey has built the largest dams in the region and has been the least compliant with international water law among the Kura-Aras basin countries, failing to participate in five of the eight international agreements regulating regional water use. In fact, Turkey was one of only three countries to vote against the 1997 UN Watercourses Convention, which serves as the primary source of international water law.

As dam-building and climate-induced water variability continue to stress regional resources, the countries around the Caucasus will look for ways to use – or avoid – international law to effectively manage the Kura-Aras basin.

And as the region moves toward a new status quo following last year’s war, hydropolitics will likely be a vital agenda item in any negotiation format.

Read part 1 of this series.

Nareg Kuyumjian is a recent graduate of Georgetown University’s Walsh School of Foreign Service with a B.S. in International Relations and a certificate in Eurasian, Russian and Eastern European Studies.