The rural protesters’ straightforward demands for economic and environmental justice are challenging the political class’s narratives of the free market. 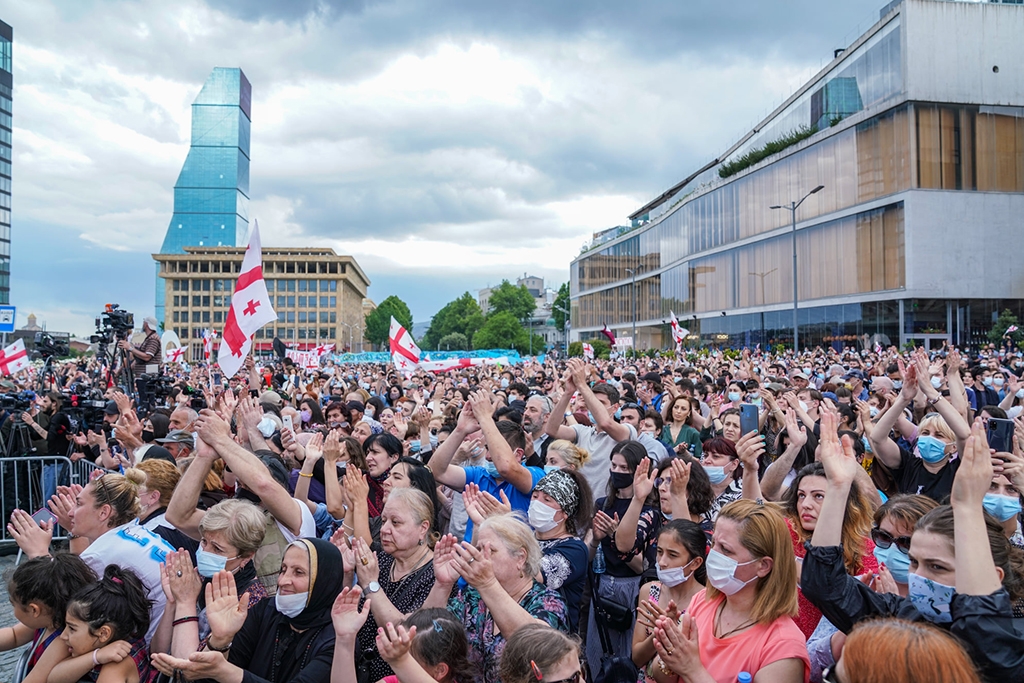 Despite their lack of affiliation with any political party, the protest leaders have managed to hold a number of rallies that rival anything Georgia’s opposition has gathered in the capital recently, but with a fraction of the press coverage. (courtesy Vakho Kareli / Formula)

This year Georgia’s Independence Day, May 26, saw two competing visions for what “independence” means for the country. The major media discussed foreign messages of congratulations, broadcasting fighter jet flyovers and the usual festivities.

But on Tbilisi’s First Republic Square, the charismatic son of a village priest, Varlam Goletiani, was offering a different vision. Thousands of supporters of his Rioni Valley Defenders movement had gathered there, in what might be the biggest protest yet against a multi-national corporation that has received excessively favorable terms from the Georgian government. Goletiani called on supporters “to say that this country belongs to us, to finally feel the worth of real freedom and independence.” 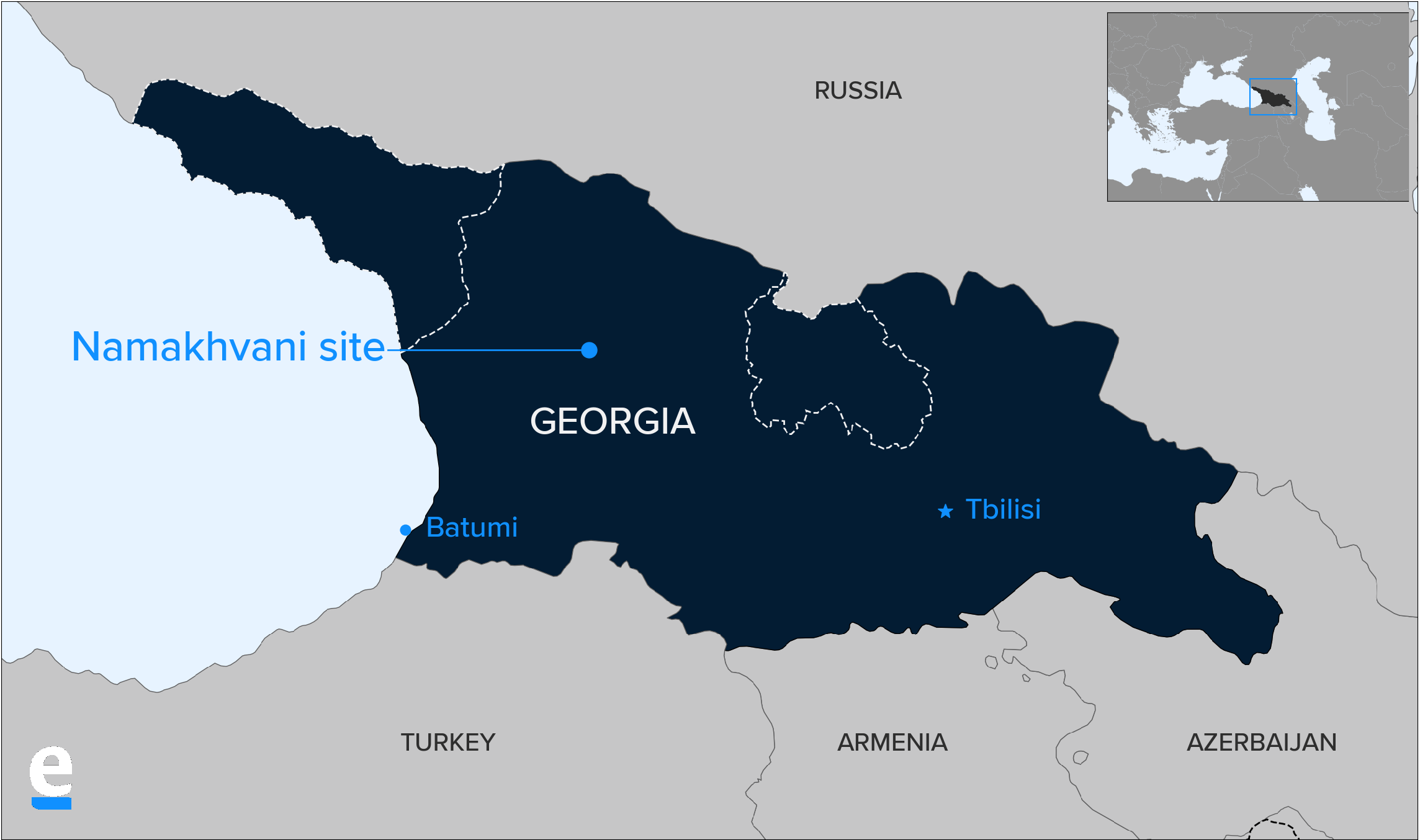 The Rioni Valley Defenders had arrived in Tbilisi four days earlier and had been camping in tents in the square. They had come from western Georgia, the center of the months-old movement, where the Turkish construction company ENKA has been trying, against the will of locals, to build a $800 million, 433 MW hydropower cascade in the village of Namakhvani. Locals are overwhelmingly opposed to the two dams and, despite their lack of affiliation with any political party, have managed to hold a number of rallies that rival anything Georgia’s opposition has gathered in the capital recently, but with a fraction of the press coverage – especially positive coverage. They came to Tbilisi to raise the visibility of the issue nationally, but they found its leaders most unwelcoming.

Tbilisi’s media and political elites, both from government and opposition, look down on the movement. Its leaders are from the valley and the protesters include many rural women whose long skirts, long sleeves and crosses stand out in urbane Tbilisi. One of the reasons for their success so far is that they speak plainly and clearly, not in the NGO-ese of the capital’s political class. Their demand is simple: our land is not for sale.

In a political spectrum where all parties are merely different shades of free market fundamentalism, it is impossible to accept such blatant disrespect for a contract. Though the ruling Georgian Dream party and the opposition have fought bitterly over the past decade, their battles are not ideological. Each shares a commitment to the sanctity of private property above all else.

While opposition protests generally get favorable coverage from Georgia’s non-state media, now the government-affiliated and opposition media are united against the Rioni defenders, their respective smear campaigns complementing one another.

Pro-government media have associated the protesters with far-right and cultural proto-fascists, and have accused them of being Russia-backed – the ultimate slur in Georgia. Irakli Kobakhidze, the chair of the ruling Georgian Dream party, said he intends to investigate where the Rioni Valley Defenders get their funding. The money in fact largely comes from labor migrants working abroad, which Kobakhidze suggested is suspicious. He does not seem aware that this is how millions of Georgian families have been fed and clothed as Georgia’s government and private sector have failed to build a workable economy since independence.

The opposition media, too, have been stymied in their efforts to frame these protests as part of a culture war pitting progressive pro-Westerners against ignorant Russophiles. The protests in Tbilisi attracted a diverse group of feminists, progressive liberals, leftists, and queer activists who stood side-by-side with the Rioni Valley Defenders, united in their opposition to economic and ecological exploitation.

LGBT rights are frequently deployed as a marker in this supposed culture war. In one illustrative episode this week, the liberal magazine Tabula pressed Goletiani on his stance on LGBT issues. It wasn’t clear what relevance this had to his efforts to save his home, and opposition politicians are rarely pressed on similar questions despite their often-retrograde opinions about gay rights. Goletiani nevertheless dodged the trap and responded that everyone was welcome at the protests.

The movement was tested on the first day of the protests when a notorious far-right father and son duo who were taking part in the protests assaulted other protesters wearing rainbows indicating support for LGBT rights. The attack was widely reported and widely condemned and again the leaders of the movement were forced to address the LGBT issue. Organizers responded by asking everyone to come to the protests without any symbols other than Georgian flags, and one of the defenders’ leaders, Maka Suladze, announced that she would put aside the cross she had been carrying, explaining that, after all, Tbilisi is a multi-religious city and the most important thing is saving the Rioni Valley. She also criticized the far-right father and son for distorting the real essence of Christianity. Her simple moral stance gained the protesters even more support.

While much of the social media discussion of the protests have been centered around these culture war issues and the defenders’ skillful response, the major media were trying to distort the economic and environmental issues at play.

The government has presented the need for the dam – which would be the largest built in post-Soviet Georgia – primarily as a question of “energy independence.” Opponents of the defenders paint them as being unreasonably opposed to any development at all. The leader of the Lelo party, banker Mamuka Khazaradze, said, “When ‘build’ rallies are bigger than ‘do not build’ rallies, then the country will begin to revive.”

The Rioni Valley Defenders are the first major mass movement in Georgia to not only fight to protect the environment but also to question the economic logic behind development, challenging the government’s authority to lease the land to foreign investors and objecting to the terms of the contract. The government had been trying to keep the agreement and assessments with ENKA secret. But the day before the rallies started, the independent media outlet Mtis Ambebi, the only publication in the country consistently providing quality reporting on Namakhvani, published a leaked report from the Justice Ministry. It confirmed what many dam opponents have been arguing: that most obligations in the contract apply to the government and that the company enjoys near-complete protection and few liabilities. The contract even allows for compensation to the company in case of protests and disruptions.

These kinds of one-sided and confidential contracts are not unusual in Georgia; another is with the American energy company Frontera. Unusual is an effort to question what good they bring average Georgians. In Tbilisi, Goletiani said his movement wants people to be included in decision-making, in building a state that respects the people and the land. Besides voiding the current ENKA contract and all related legal procedures, his movement unveiled a new demand: a moratorium on all energy projects underway and the creation of a new national energy plan with public participation.

The government and opposition, meanwhile, cling to their version of “independence,” which usually refers to political independence from Russia, which at the same time is spuriously associated with socialism in public discourse – in other words, the opposite of the fashionable laissez-faire libertarianism. This political class is eager to sell off Georgia’s land or let foreign investors exploit it while demanding little in return, all in the name of “attracting investment” and achieving high marks in global ease-of-doing-business rankings. It’s the same reason Georgia has no minimum wage, a business-friendly tax regime, weak labor laws and a weaker social safety net. In spite of the fact that these exploitative investments have yielded little development in any real sense of the term, the authorities continue to be more concerned about damaging the investment climate than damaging the environment. It is thus unlikely that they will walk back on a contract of this magnitude.

After Independence Day, the Rioni Valley Defenders returned to their valley. They were met in Kutaisi, the region’s biggest city, by masses of people honking and waving their flags to welcome them. The police, meanwhile, had erected iron fences in Rioni to restrict the protesters’ ability to disrupt construction and even cut off access to some of the defenders’ homes. The protestors spent the rest of the night banging on the fence in attempt to remove the barrier. 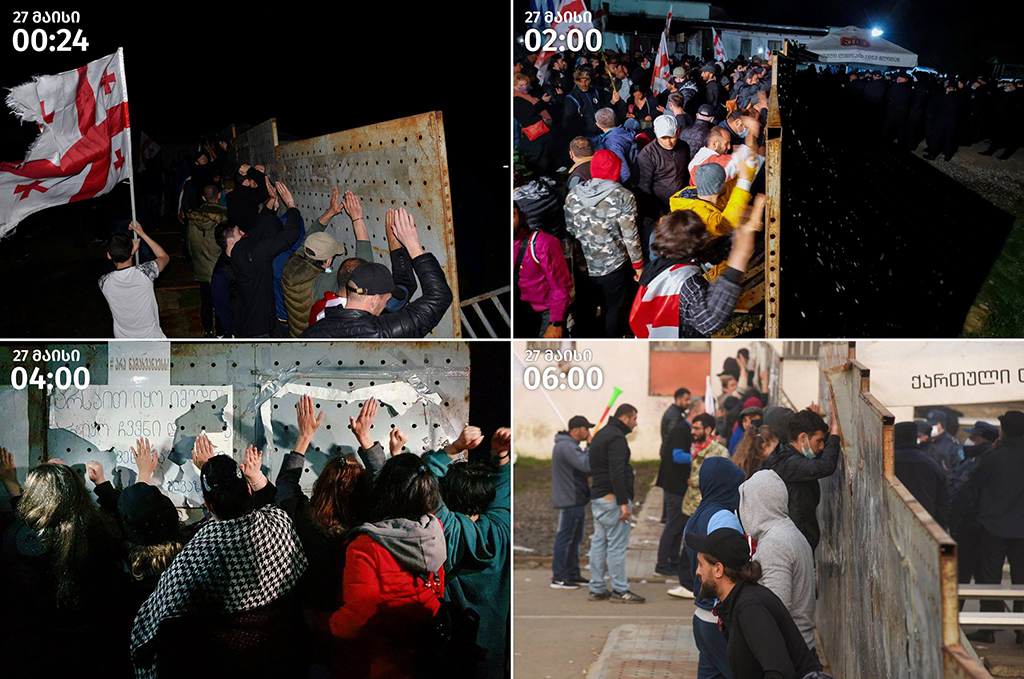 Though their stay in the capital was short and frosty, the defenders’ vision for Georgia has captured the imagination of many Tbilisians, challenging the way people think about foreign investment and the way decisions in Georgia are made. They have brought attention to the idea that some things shouldn’t be in private hands for private profit while the public pays the price. Even if they don’t manage to prevent the dam’s construction, they are changing Georgians’ ideas about what they should accept from their leadership.

Sopo Japaridze is a labor and community organizer in Tbilisi.