Moscow at first responded to the war cautiously, but was in the end forced to intervene decisively. Was this a geopolitical coup or was Moscow’s hand forced? 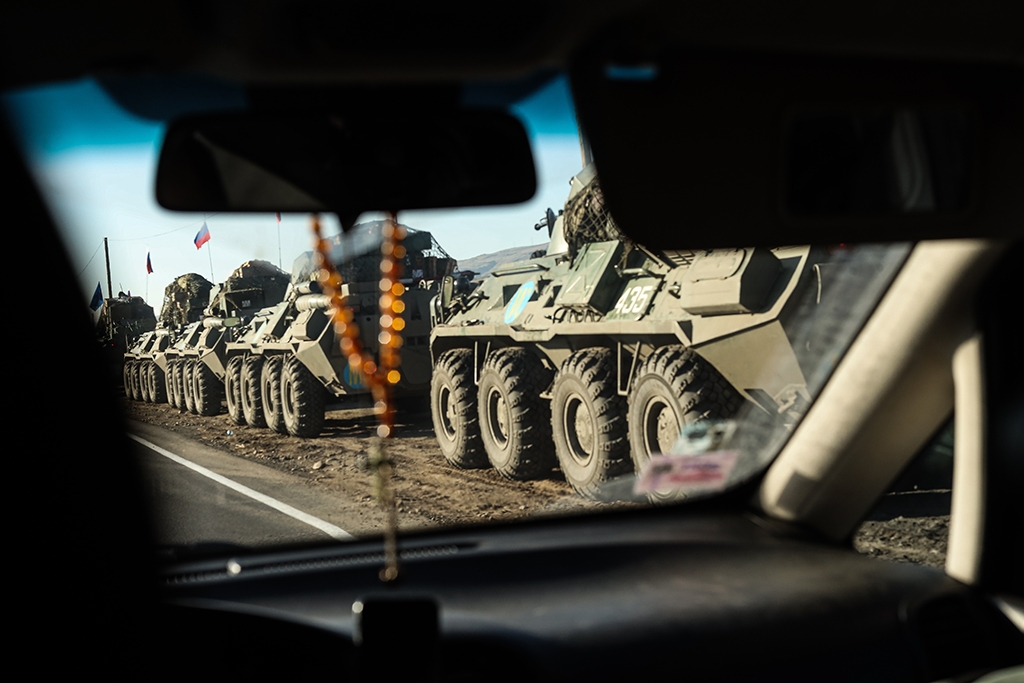 With its dramatic brokering of a ceasefire agreement between Armenia and Azerbaijan and the deployment of peacekeepers to Nagorno-Karabakh within hours to enforce it, Russia has appeared to pull off a spectacular geopolitical coup.

Throughout the six-week war, Russia’s relative restraint had been the subject of avid speculation. Now, with its decisive intervention in brokering and enforcing the agreement cementing its authority in the region, what can we glean about its motives and ambitions for its newfound clout?

Was Moscow really playing a long game all along, circling while the belligerents weakened each other sufficiently for it to swoop in and impose a new regional order? Or was Russia caught unprepared by Turkey’s forceful entry into its backyard and left struggling to define red lines in a conflict that was itself second-tier in Russian strategic thinking but tied to many other, more vital, interests?

The truth may lie between the two. Faced with an all-out war in its neighborhood that resisted traditional forms of brokerage, Moscow improvised in a series of tactical moves that consciously sought to avoid over-committing. This can be taken to reflect a sense of pragmatism in Russia’s policy toward its “near abroad,” one that privileges on-the-ground realities over the sticky attachments of neo-imperial nostalgia.

When the conflict broke out with Turkey much more explicitly on Azerbaijan’s side, Moscow’s restraint may have reflected calculations that some kind of modus vivendi with Ankara was both inevitable and ultimately more useful than holding out for an effective multilateral approach with disengaged Euro-Atlantic actors, with whom Russia is at loggerheads on a host of other issues.

Yet as the conflict progressed, the prospect of a complete Azerbaijani military victory forced Russia’s hand. The Kremlin revived a previous scheme, circulating since 2015 and informally referred to as the “Lavrov Plan” after its architect, Russian Foreign Minister Sergey Lavrov. In the past, Moscow had been unable to persuade the parties to accept the plan, in particular because of its stipulation of a Russian peacekeeping deployment.

That resistance was weakened by the outcomes of the six-week war, which ravaged Armenia and saw Azerbaijan regain not only four of the occupied territories around Nagorno-Karabakh but the symbolic and strategic prize of Shusha (known as Shushi to Armenians).

Why Baku did not then proceed to complete the operation is a question that will be widely discussed in years to come. At least in the short-term, Azerbaijani restraint was sweetened by the attainment of Armenian withdrawals from all occupied territories within weeks (which President Ilham Aliyev had foregrounded as the key war goal), as well as a long-coveted land connection to Nakhchivan.

A major peacekeeping operation – deployed in a matter of weeks – may not have been on the Kremlin’s agenda when the war broke out. But once lower-cost options were off the table, Moscow acted decisively to stave off what could have been an outcome even costlier to its regional standing.

In the early stages of the conflict, Russia’s initial responses were modest: pro forma calls for restraint and a joint statement with Minsk Group co-Chairs France and the United States.

Many hoped that when the Kremlin brokered a ceasefire on October 10, that that would be the end of it. The war was then 14-days old, already a significant step up from April 2016’s “Four Day War,” but still seemingly rooted in the same paradigm of limited operations aimed at reclaiming territory piecemeal, or what analyst Nicu Popescu dubbed Azerbaijan’s “salami tactics” to reclaim Nagorno-Karabakh bit by bit.

A Russian-brokered ceasefire honored by the warring parties would have been the optimal outcome for the Kremlin, affirming that its writ still runs large in the South Caucasus. The realization that the game had changed, however, came within hours when the ceasefire was broken. Just a few days later the Azerbaijani advance had broken through deep into the Armenians’ southern flank, further signaling that this war was headed towards a fundamental remaking, rather than incremental shift, of the status quo ante.

With hopes for a real ceasefire apparently dashed, Russia’s subsequent responses are illustrative.

Around October 20, small Russian military outposts were established near Armenia’s borders, which could have been interpreted as a (very delayed) show of support to Armenia, but one which also left options open if hostilities continued. Russia also conducted airstrikes on the Syrian National Army faction Faylaq al-Sham on October 26, killing around 80, in a kind of indirect escalation that sent a signal to Turkey that the deployment of Syrian mercenaries in the South Caucasus was a red line.

In the first week of November, as Azerbaijan prepared for its operation to capture symbolic Shusha, the elements of the trilateral agreement to be signed were already defined and leaked to the media by Turkish officials. The success of the Shusha operation was the essential trump card that enabled President Aliyev to re-enter talks with the retention of Shusha and the schedule of Armenian force withdrawals as his baseline position.

An exercise in containment

The trilateral agreement can be read as a vehicle truncating decisive outcomes. It truncates, but does not deny, Azerbaijan its victory. By the same token it makes Armenia’s defeat less than total, but defers discussion of core Armenian concerns – namely, the status of the remaining parts of Nagorno-Karabakh – into an uncertain future.

Russia’s intervention does not prevent Turkey’s entry into the South Caucasus as a security actor, but pending the outcomes of negotiations on the scope and location of Turkish military observers, it contains it. Russia’s intervention thus ensures that the regionalization of the conflict happens on terms more favorable to Russia, only conceding ground to Turkey where necessary.

A major peacekeeping operation in Nagorno-Karabakh nevertheless represents a substantial escalation in Russian commitments. It is not a hegemon’s first choice of strategy. Hegemons usually act in less direct ways: offering collective security that prevents conflicts breaking out in the first place, providing attractive aid and trade arrangements, and inducing subordinates to follow your rules and values through powers of persuasion. Paradoxical as it may seem, Russia’s intervention represents the truncation of more genuinely hegemonic alternatives for the exercise of power.

In the mid-term, the renewal of Russia’s peacekeeping mandate will now become a disproportionately weighty item on its bilateral agenda with Yerevan and Baku, presumably with conflicting pressures for and against its renewal emanating from Armenia and Azerbaijan, respectively. Managing the friction and its spillover into other interests in its relations with each state, while preserving friendly relations with both, will be a significant challenge for Russian diplomacy.

This matters because the Kremlin has long defined its best interest in this conflict as the avoidance of choosing sides, in order to preserve long-term influence over both Baku and Yerevan.

By interceding before a complete destruction of the unrecognized Armenian jurisdiction in Nagorno-Karabakh, the trilateral agreement saves a future for Moscow’s relationship with Yerevan. Yet by preserving a truncated Nagorno-Karabakh to which former residents may not feel incentives to return, and mandating a five-yearly veto power for both Baku and Yerevan on the renewal of the peacekeeping mandate, it does not sacrifice the future of Moscow’s relationship with Baku either.

Rather than a stable long-term game, what is striking in Russia’s approach to the Armenian-Azerbaijani conflict is its tactical flex. That approach has always used a variety of different tools and mechanisms, on which the Kremlin draws in response to particular political opportunities and risks in a conflict that it has not controlled and to which it has sought to avoid becoming a direct party.

Now, arguably, Moscow has that control. The test will be whether it can avoid being seen to take sides, and can instead focus on the more important goal of workable relations with both Armenia and Azerbaijan.