Perspectives | Don’t water it down: The role of water security in the Armenia-Azerbaijan war

Water disputes helped escalate the conflict into all-out war. Left unaddressed, they pose the same risk again. The first in a three-part series. 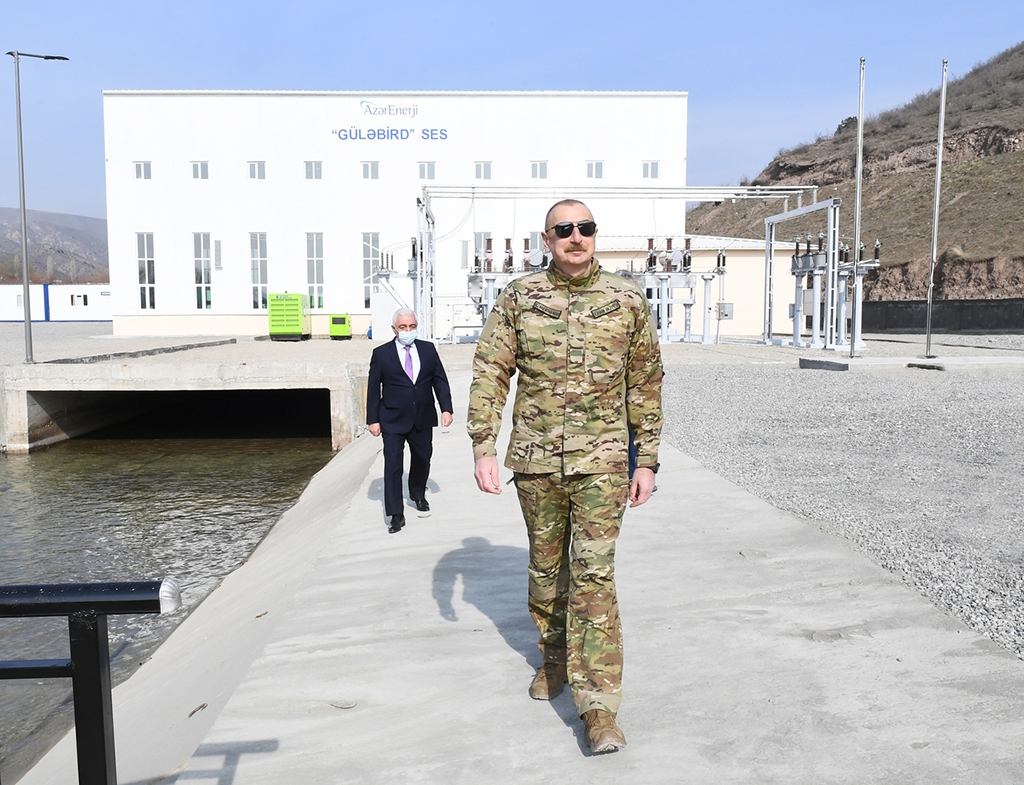 Aliyev celebrating victory at the at Gulabird hydropower plant in February (president.az)

Just three months after the end of last year’s war between Armenia and Azerbaijan, President Ilham Aliyev traveled to the Lachin district for a photo-op at the Gulabird hydropower plant, in territory that Baku had retaken as a result of the war. Fast forward another three months, and the most serious post-war flashpoint became Sev Lich, a borderland reservoir that Azerbaijani troops surrounded.

The role that water resources have played in post-war politics should come as no surprise. The rivers of this region, and the South Caucasus’s greater Kura-Aras river basin flowing into the Caspian Sea more broadly, have played a significant – yet overlooked – role in the pre-war, wartime, and post-war conflicts between Armenians and Azerbaijanis.

Climate change and regional hydrological patterns give the lands in and around Nagorno-Karabakh a uniquely vital role in providing water to the surrounding region, which is particularly prone to water scarcity.

Scientists have projected alarming climate-induced water vulnerabilities in Armenia and Azerbaijan. Armenia expects a 52 percent decrease in rainfall by 2040, while Azerbaijan’s diminishing water supply is projected to lead to a 77 percent decrease in crop yield over the same period – the worst in the region. The impacts of climate change have been and will continue to be felt most profoundly downstream in the Kura-Aras basin, where river flow is the lowest and agricultural demand the highest.

In this downstream region, Nagorno-Karabakh serves as a key source of water. It is home to the headwaters of eight major rivers, four major dams, and 33 hydropower plants. As depicted in the map below, the region is home to three tributaries of the Lower Kura (Tartar, Khachen, and Karkar) and five tributaries of the Lower Aras (Vorotan, Voghchi, Hakari, Ishkhan, and Chkhpor).

Yet, despite its strategic water resources, the region’s legal water norms have not been updated since the 1962 Arpa Agreement brokered by the Soviet Union. This is emblematic of the significant lack of water norms across the region. While the region shares the 188,400 square-kilometer Kura-Aras river basin as its main source of freshwater, no water management agreements have been signed among the riparian states since the collapse of the Soviet Union (with the exception of an agreement signed between Iran and Azerbaijan in 2016). Rather, states rely on 15 outdated Soviet-era water agreements signed bilaterally between the USSR, Turkey, and Iran that are marred with questions of enforceability and have proven unsuitable to today's climatic and geopolitical challenges. For these reasons, the Kura-Aras has been classified as a “high-risk of conflict river basin” by both scholars and international organizations.

Accordingly, the water factor has been almost completely left out of mediation efforts around the Nagorno-Karabakh conflict. The situation has been exacerbated by the fact that Azerbaijan is much more dependent, in multiple ways, on the region’s water supply than is Armenia.

First, unlike Armenia, Azerbaijan depends on the lower Kura-Aras for 70 percent of its drinking water. More generally, the country receives about 75 percent of its freshwater supply from outside its borders and thus is highly reliant on upstream water resources.

Second, this region’s water is a major input for Azerbaijan’s main agricultural lowlands. The Tartar River, for example, flows through Nagorno-Karabakh to irrigate 100,000 hectares in Azerbaijan’s climate-vulnerable agricultural regions of Barda and Tartar.

Third, Azerbaijan places a high importance on Nagorno-Karabakh’s water as a source of hydropower, which can reduce the country’s domestic natural gas consumption and free more of that resource for export through the recently commissioned Southern Gas Corridor. Gas now represents 82 percent of Azerbaijan’s electricity mix, but exporting more would both drive up revenue while helping the country achieve its domestic emissions targets.

Azerbaijan’s dependence on water has repeatedly exacerbated water relations with Armenia before, during, and after the Second Karabakh War.

In 2016, Azerbaijanis and European officials accused the de facto authorities in Nagorno-Karabakh of “deliberately depriving” Azerbaijan of water via its control of upstream water resources. The summer before the second war, Azerbaijan experienced dire water shortages, and officials blamed neighboring countries, including Armenia and Georgia. The problem was widely covered in Azerbaijani media and Aliyev publicly addressed the issue, demanding that all “relevant bodies […] showing indifference to this issue should be punished.” When the war started, some observers identified the water problems as contributing to Aliyev’s decision to launch the offensive.

Wartime developments, too, highlighted the strategic nature of water resources.

On the northeastern front, Azerbaijani forces advanced until the Madagiz Dam (map, 22) on the Tartar River and the Khachen Dam (map, 23) on the Khachen River. The fact that, by the November 9 ceasefire, the new line of contact ran along these two dams demonstrates the importance of water as a military objective during the campaign.

Heavy fighting in the vicinity of a fourth major dam, Khudafarin (map, 21), sparked apparent concern from Iran; the dam straddles the border between the two countries.

The ceasefire agreement stipulated the return of all territories surrounding Nagorno-Karabakh that Armenian forces had controlled since the first war between the two sides in the 1990s; that included Kelbajar, the source of both the Tartar and Hakari rivers, two major tributaries of the Kura and Aras, respectively.

After the war, post-war Azerbaijani rhetoric has celebrated its newly regained water resources and has heavily promoted its plans to invest in hydropower potential. The Gulabird ceremony is a symbol for what is to come. “We will restore all the hydroelectric power stations,” Aliyev said during his February visit to the plant. Immediately following the ceasefire, Baku began negotiations with Tehran over Khudafarin.

While it would be too much to claim that water is a main driver of the conflict, not recognizing the significance both Armenia and Azerbaijan give to the limited water resources would be remiss.

Weak norms in the water relations between the two countries have repeatedly lent themselves to the military escalation of the conflict and pose the same risk moving forward.

The ceasefire agreement that ended the fighting makes no mention of water. But the Azerbaijani incursion around Sev Lich, and recent water shortages in the de facto capital of Nagorno-Karabakh, Stepanakert, highlight the continuing tension that unresolved water issues create.

The conflict continues to harbor many unresolved issues. The Armenian side continues to await the return of prisoners being held by Azerbaijan, while Azerbaijan is pushing for a quick demarcation of the international border between the two countries. Hanging over it all is the unresolved status of Nagorno-Karabakh itself. In the meantime, the lack of clarity around water means the conflict will continue to be vulnerable to inflammatory hydropolitics.

Nareg Kuyumjian is a recent graduate of Georgetown University’s Walsh School of Foreign Service with a B.S. in International Relations and a certificate in Eurasian, Russian and Eastern European Studies.