It feels like everyone in Georgia is using the pogroms of July 5 for their own agenda. But we can’t lose focus on why they happened. 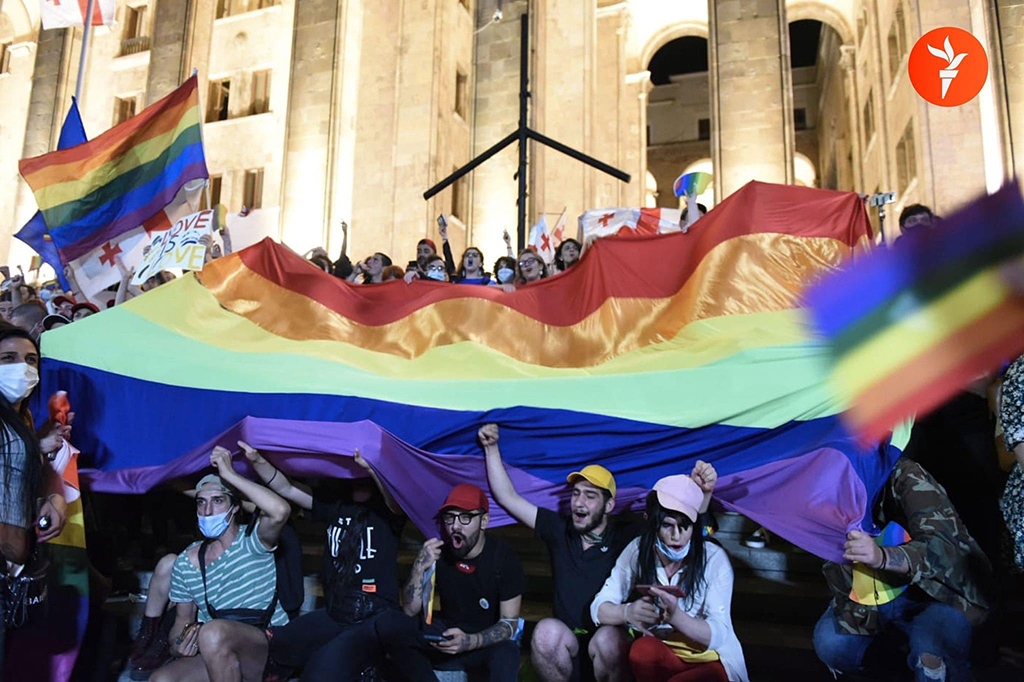 These are difficult days for queer people in Georgia.

Following homophobic pogroms led by far-right groups in Tbilisi on July 5 and 6, the violence has continued. Every day we hear stories about how queer people – or even people who might be taken for queer – are being harassed, beaten up, even killed.

I myself was accosted a week after the mass violence, along with a group of friends, by several homophobic young men on Tbilisi’s central Rustaveli Avenue. If not for the pepper spray I was carrying, I believe we would have been physically attacked.

But these incidents are rarely reported. And as the devastating events of July 5-6 continue to reverberate in Georgia, LGBTQ+ people are being written out of the narrative that the media, social movements, political parties and other actors have been writing. We have become an issue to be debated, rather than human victims whose existence was the reason for the violence.

Much attention has been paid to the press. Up to 53 journalists were attacked on that day, resulting in the important realization that homophobic violence does not concern only queers. Anyone can be a victim. But this discourse also reinforces the notion that if the violence is limited only to queer people, it is not a serious problem.

Media have been actively investigating the business and political ties between far-right groups and the ruling Georgian Dream party. It is correct to place the responsibility on the government for enabling the violence by the passivity of the police and the verbal encouragement that senior leaders gave the groups ahead of the Tbilisi Pride march. But what needs to be discussed is the oppression of queers and homophobia that led to this alliance being possible.

The problematic tendency has a long history; queer people and issues have been instrumentalized for decades in Georgia. In Soviet times, queerness was associated with the capitalist bourgeoisie or political dissidents aiming to destroy socialist values. In the post-Soviet 1990s, ultranationalist narratives linked national identity to Orthodox Christianity; politicians began to attack rivals with accusations of homosexuality. Today, queerness has become a marker for one’s progressive politics and Western orientation.

We are being instrumentalized by all sides, and it is difficult for our voices to break through.

The recent events illustrated the close interdependence between the Georgian Orthodox Church and the Georgian government, as both are in crisis. The government has a decade-long record of policy failures and stagnation; the church leadership is reeling from a recent scandal involving the abuse of children, on top of a broader backlash against church leaders for their lavish lifestyles. To divert attention from all this, the victimization of vulnerable LGBTQ+ Georgians is the crudest instrument.

The church and far right groups are supported both by Russian state interests and conservative groups in the West. Pro-Western, self-proclaimed “progressive” groups like the opposition Shame! movement, meanwhile, organized a protest in response to the violence of July 5-6 without inviting queer people to speak. Instead, opposition political parties and allied journalists used the event to fight for their own agendas.

While the ruling party has been actively fueling homophobia, presenting it as the will of the majority of Georgians, opposition parties have been silent. When some of them were in power, these parties helped build the system we see today: They lavishly financed the church, created a heavily securitized state, and developed a sub-par education system that fails to adequately address sexuality and gender.

Now, though, they seek tactical alliances with groups like Tbilisi Pride, the organization that tried to hold the march that was disrupted on July 5, in the apparent aim of mobilizing pressure against the Georgian Dream government. But since the violent events of that day, they have remained silent on issues related to homophobia. They want to use what happened on July 5 for their own political agenda without alienating the church or conservative voters.

Perhaps most frustrating is the almost total silence of leftist groups in Georgia, who should be the closest allies of queer Georgians. While leftist groups in Georgia are small and marginalized, those that do exist often respond with hostility and subtle homophobia to attempts by queer groups to build alliances. There is a tendency to mask these attitudes by explaining away homophobic violence as a protest against Western cultural and economic imperialism, or to deprioritize queer issues on the grounds that Georgia has bigger battles to fight.

Amid all this, LGBTQ+ groups themselves are riven with eternal infighting and struggle to unite around basic issues, like the appropriateness of holding Pride events and how or whether to cooperate with political groups.

It is easy to be pessimistic in these circumstances. But perhaps this crisis is in fact what we need to bring us together, to join forces and think together about a way out of this situation. The alternative appears to be an increasingly authoritarian regime that will make the country unlivable not only for queers, but for all other Georgians as well. We don’t have the luxury of waiting for things to get better by themselves.

Levan Berianidze is a queer feminist activist from Georgia.